The MetaTrader 5 platform was originally designed for trading within the netting position accounting system. The netting system allows having only one position per financial instrument meaning that all further operations at that instrument lead only to closing, reversal or changing the volume of the already existing position. In order to expand possibilities of retail Forex traders, we have added the second accounting system — hedging. Now, it is possible to have multiple positions per symbol, including oppositely directed ones. This paves the way to implementing trading strategies based on the so-called "locking" — if the price moves against a trader, they can open a position in the opposite direction.

This article describes the netting and hedging systems in details, as well as sheds light on the changes related to the implementation of the second accounting system.

A position accounting system is set at an account level and displayed in the terminal window header and the Journal: 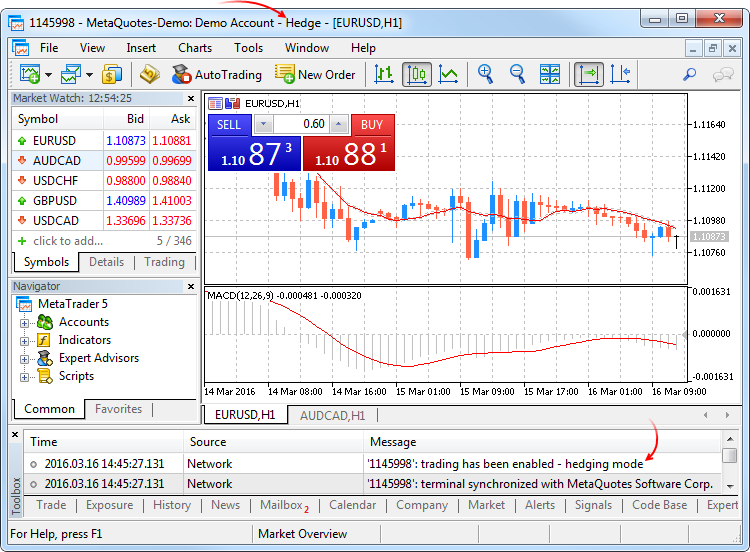 To open a demo account with hedging, enable the appropriate option: 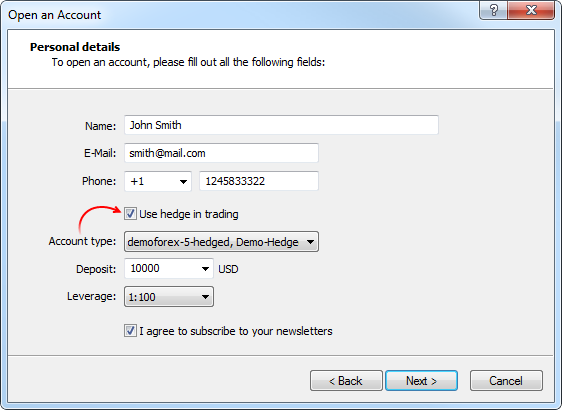 With this system, you can have only one common position for a symbol at the same time:

It does not matter, what has caused the opposite deal — an executed market order or a triggered pending order.

Execution of both deals resulted in one common position of 1 lot.

With this system, you can have multiple open positions of one and the same symbol, including opposite positions.

If you have an open position for a symbol, and execute a new deal (or a pending order triggers), a new position is additionally opened. Your current position does not change.

Execution of these deals resulted in opening two separate positions.

Impact of the system selected

Depending on the position accounting system, some of the platform functions may have different behavior:

The new trade operation type has been added for hedging accounts — closing a position by an opposite one. This operation allows closing two oppositely directed positions at a single symbol. If the opposite positions have different numbers of lots, only one order of the two remains open. Its volume will be equal to the difference of lots of the closed positions, while the position direction and open price will match (by volume) the greater of the closed positions.

Compared with a single closure of the two positions, the closing by an opposite position allows traders to save one spread: 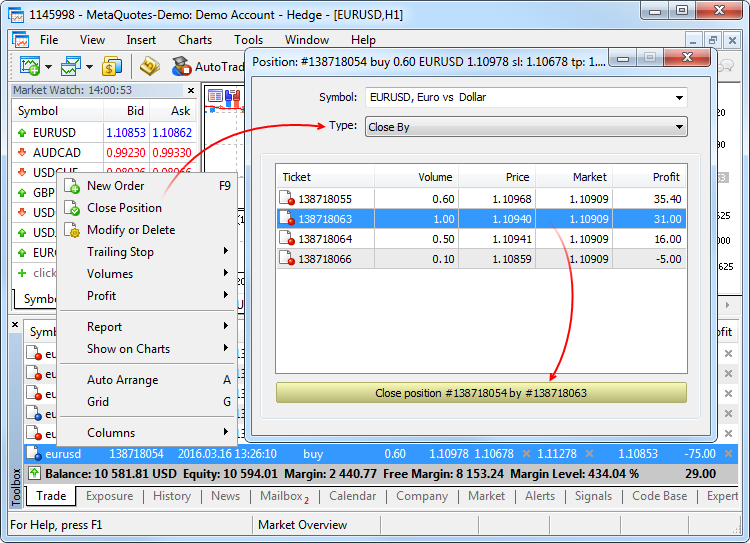 In the latter case, a "close by" order is placed. Tickets of closed positions are specified in its comment. A pair of opposite positions is closed by two "out by" deals. Total profit/loss resulting from closing the both positions is specified only in one deal.

Margin calculation in the hedging system of position accounting

If the hedging position accounting system is used, the margin is calculated using the same formulas and principles as described above. However, there are some additional features for multiple positions of the same symbol.

Positions/orders open in the same direction

Their volumes are summed up and the weighted average open price is calculated for them. The resulting values are used for calculating margin by the formula corresponding to the symbol type.

For pending orders (if the margin ratio is non-zero), margin is calculated separately.

Now, each position has its unique ticket. It usually corresponds to the ticket of an order used to open the position. A ticket is assigned automatically to all available positions after the terminal update.

When modifying or closing a position in the hedging system, make sure to specify its ticket (MqlTradeRequest::ticket). You can specify a ticket in the netting system as well, however positions are identified by a symbol name.

The new PositionGetTicket function returns a position ticket by an index in the list of open positions and automatically selects that position for further work using the PositionGetDouble, PositionGetInteger, and PositionGetString functions.

The new PositionSelectByTicket function selects an open position for further work by a specified ticket.

The new property ACCOUNT_MARGIN_MODE allows receiving the mode of margin calculation and position accounting on a trading account:

The new property SYMBOL_MARGIN_HEDGED allows receiving the value of a hedged margin by a trading symbol. Margin calculation in the hedging system of position accounting has been described above.

Due to the addition of the new Close By operation type, the new trading properties have appeared as well:

Now, you can use MetaTrader 5 to trade both stock markets and the popular retail Forex with hedging. Developers of the automated systems applying hedging have received another important advantage. Apart from the multithreaded tester, the entire computing capacity of the MQL5 Cloud Network is at their disposal now.

Update your platform and try the new features!

Alain Verleyen
4.9 (219)
2 products, 20367 comments
| 16 Apr 2016 at 13:45
Rodrigo Silva Cosme:
I see one great advantage when trading different time frames. On the netting system it was necessary to keep virtual positions on each time frame, virtual stop loss and take profit orders, etc. That was a lot of work. I could be long on EURUSD on H1, short on H8 and long on D1 all with different stop loss levels and there was no easy way to handle that with the netting system. With the possibility of closing different positions on the same currency that problem is solved and trading on the way I described on the same currency is a lot easier.
Of course, that's a lot easier.

Rodolfo Machado
2 comments
| 9 May 2016 at 23:50
Diogo Seca:
There's something I must not be grasping here. I don't see any overall benefit when it comes to hedging this way.
I mean, as I see it, the reason MQL5 never allowed hedging like this in the first place was because hedging a position by opening an opposite position is the same thing as simply closing the first one.

Why would a user prefer the "hedging system" to the "netting system"?

The only reason I could see for this implementation is more compatibility with brokers, somehow. Any insights here?
I'm also waiting for a broker with real accounts for MT5 Hedging...

In other words, while the MT5 is advertised to have more features than MT4, it (in fact) restricts the traders' options.


What about the commission?

But what if a broker isn't asking for a commission but has increased the spread? Don't I pay the spread twice as well?

What about Carl's concern about paying the commission twice? Any answers from MetaQuotes, any experiences, please?

Graphical Interfaces II: Setting Up the Event Handlers of the Library (Chapter 3)
The previous articles contain the implementation of the classes for creating constituent parts of the main menu. Now, it is time to take a close look at the event handlers in the principle base classes and in the classes of the created controls. We will also pay special attention to managing the state of the chart depending on the location of the mouse cursor.

Universal Expert Advisor: the Event Model and Trading Strategy Prototype (Part 2)
This article continues the series of publications on a universal Expert Advisor model. This part describes in detail the original event model based on centralized data processing, and considers the structure of the CStrategy base class of the engine.

Universal Expert Advisor: Custom Strategies and Auxiliary Trade Classes (Part 3)
In this article, we will continue analyzing the algorithms of the CStrategy trading engine. The third part of the series contains the detailed analysis of examples of how to develop specific trading strategies using this approach. Special attention is paid to auxiliary algorithms — Expert Advisor logging system and data access using a conventional indexer (Close[1], Open[0] etc.)

Area method
The "area method" trading system works based on unusual interpretation of the RSI oscillator readings. The indicator that visualizes the area method, and the Expert Advisor that trades using this system are detailed here. The article is also supplemented with detailed findings of testing the Expert Advisor for various symbols, time frames and values of the area.