A slowdown in Canada’s Consumer Price Index (CPI) may spur fresh monthly highs in USD/CAD especially as the Bank of Canada (BoC) reverts back to its easing cycle.

After unexpectedly cutting the benchmark interest rate at the January 21 meeting, a marked slowdown in Canada price growth may put increased pressure on the BoC to further reduce borrowing costs, and the Canadian dollar remains at risk of facing more headwinds over the near to medium-term as Governor Stephen Poloz keeps the door open to implement additional monetary support.

Nevertheless, the pickup in economic activity may generate a stronger-than-expected CPI print, and an uptick in the core rate of inflation may spur a near-term correction in USD/CAD as the stickiness limits the BoC’s scope to further reduce the benchmark interest rate. 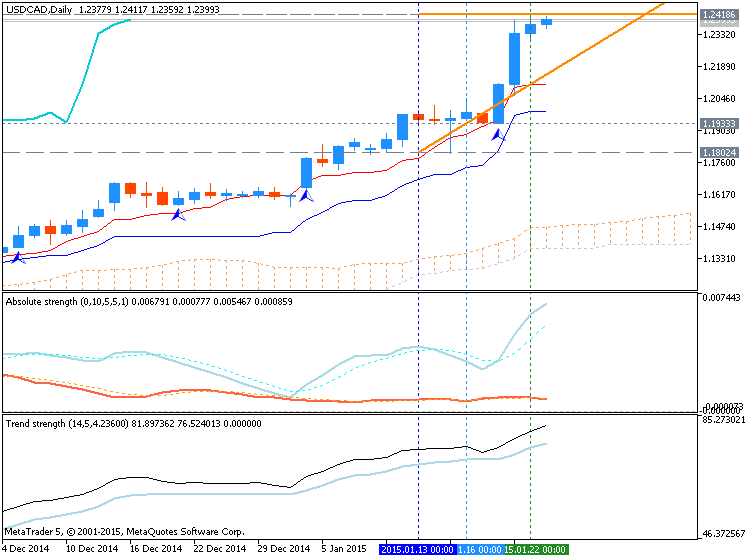 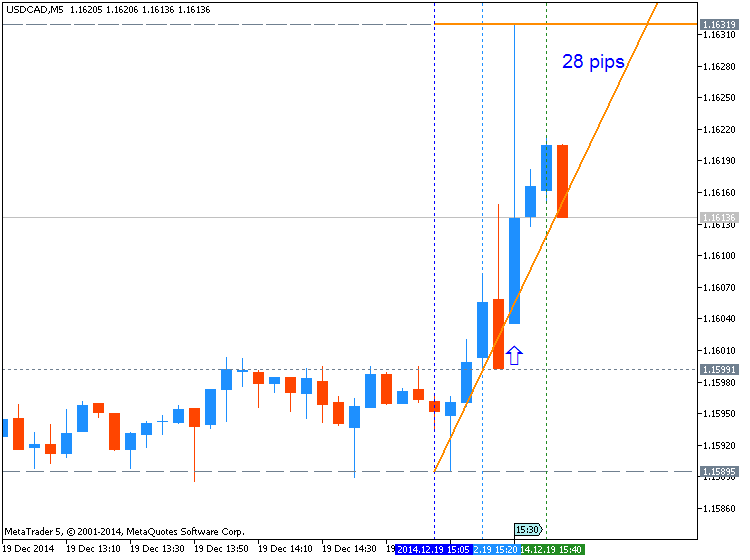 Canada’s Consumer Price Index (CPI) slowed to an annualized rate of 2.0% in November from 2.4% the month prior, while the core rate of inflation slipped to 2.1% from 2.3% during the same period. Indeed, falling energy prices attributed to a 1.7% decline in transportation costs, but we may see Canadian firms continue to offer discounted prices in an effort to draw greater demand. As a result, the Bank of Canada (BoC) may further delay normalizing monetary policy, and Governor Stephen Poloz may continue to endorse the accommodative policy stance over the near to medium-term in order to encourage a stronger recovery. The market reaction was short-lived as USD/CAD quickly slipped back below the 1.1625 region, and the pair continued to consolidate throughout the North American trade as it ended the day at 1.1602.

A quiet economic calendar in European trading hours is likely to see traders looking ahead to the US session for direction cues, with the spotlight pointing firmly to the outcome of the FOMC monetary policy meeting. Janet Yellen and company introduced a much-discussed change to the language of the policy statement at December’s sit-down, swapping out a pledge to hold rates low for a “considerable time” after the end of QE3 and replacing it with another promising to be “patient” before tightening. It seems unlikely that the cautiously slow-moving US central bank will opt to tinker with policy again so soon after making an adjustment, meaning today’s announcement will probably stick closely to the status quo.

The substance of the FOMC outcome and its interpretation by the financial markets need not align however. The markets seem primed for a hawkish result, if only because the US Dollar is hovering near six-year highs while speculative net-long positioning in the benchmark unit is at the highest since at least 1993. An outcome that sees the Fed in wait-and-see mode and fails to meaningfully advance the case for tightening may have a hard time sustaining such levels. In fact, it may serve to remind investors that the central bank has signaled no rate hikes will occur through April.

"To support continued progress toward maximum employment and price stability, the Committee today reaffirmed its view that a highly accommodative stance of monetary policy will remain appropriate for a considerable time after the asset purchase program ends and the economic recovery strengthens. The Committee also reaffirmed its expectation that the current exceptionally low target range for the federal funds rate of 0 to 1/4 percent will be appropriate at least as long as the unemployment rate remains above 6-1/2 percent, inflation between one and two years ahead is projected to be no more than a half percentage point above the Committee's 2 percent longer-run goal, and longer-term inflation expectations continue to be well anchored. In determining how long to maintain a highly accommodative stance of monetary policy, the Committee will also consider other information, including additional measures of labor market conditions, indicators of inflation pressures and inflation expectations, and readings on financial developments. The Committee continues to anticipate, based on its assessment of these factors, that it likely will be appropriate to maintain the current target range for the federal funds rate well past the time that the unemployment rate declines below 6-1/2 percent, especially if projected inflation continues to run below the Committee's 2 percent longer-run goal. When the Committee decides to begin to remove policy accommodation, it will take a balanced approach consistent with its longer-run goals of maximum employment and inflation of 2 percent."

[NZD - Official Cash Rate] = Interest rate at which banks lend balances held at the RBNZ to other banks overnight. Short term interest rates are the paramount factor in currency valuation - traders look at most other indicators merely to predict how rates will change in the future.

The Reserve Bank of New Zealand's monetary policy board on Thursday decided to hold its Official Cash Rate steady at 3.50 percent - in line with expectations.

It was the fourth straight month with no change for the RBNZ, which had hiked the OCR by 25 basis points in each of previous four meetings prior to September.

Before that, there were 23 straight meetings with no change. The OCR had been at a record low 2.50 percent since March 10, 2011 as the country dealt with the global economic slowdown.

It wasn't until last March that the central bank felt confident enough in a recovery that it lifted the OCR - although no additional action is likely in the near term.

"Trading partner growth in 2015 is expected to be similar to 2014, though the outlook is weaker than anticipated last year. Divergences continue among regions, with growth in China, Japan and the euro area easing in recent quarters, while growth in the US has remained robust," the bank said in a statement accompanying the decision.

The advance U.S. 4Q Gross Domestic Product (GDP) report may generate a larger rebound in EUR/USD should the fresh batch of data highlight a slowing recovery in the world’s largest economy. 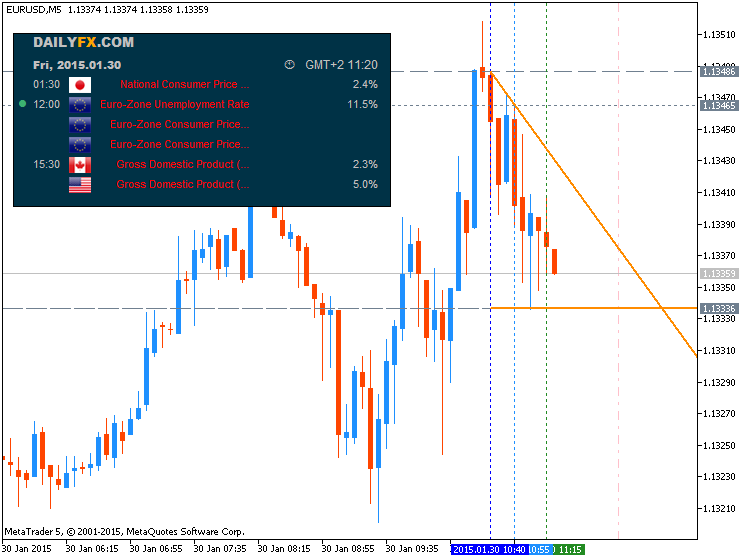 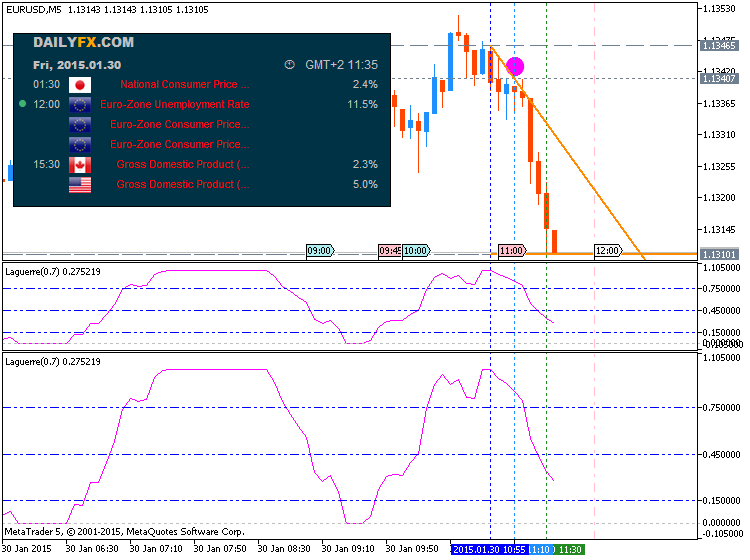 Even though the Federal Open Market Committee (FOMC) is widely expected to raise the benchmark interest rate in mid-2015, a dismal GDP print may push the central bank to further delay its normalization cycle especially as it struggles to achieve the 2% target for inflation.

Nevertheless, improved confidence along with the ongoing recovery in the labor market may prompt a strong GDP figure, and a positive development may promote a further decline in EUR/USD amid the deviation in the policy outlook. 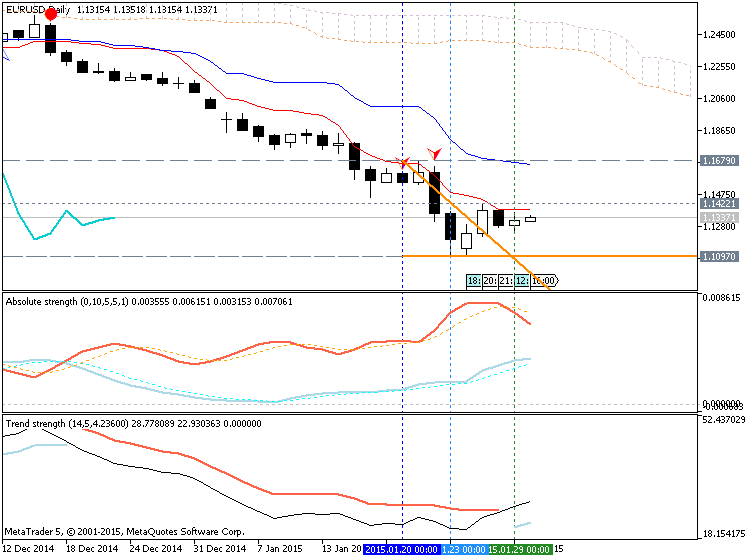 Impact that the U.S. GDP report has had on EUR/USD during the last release 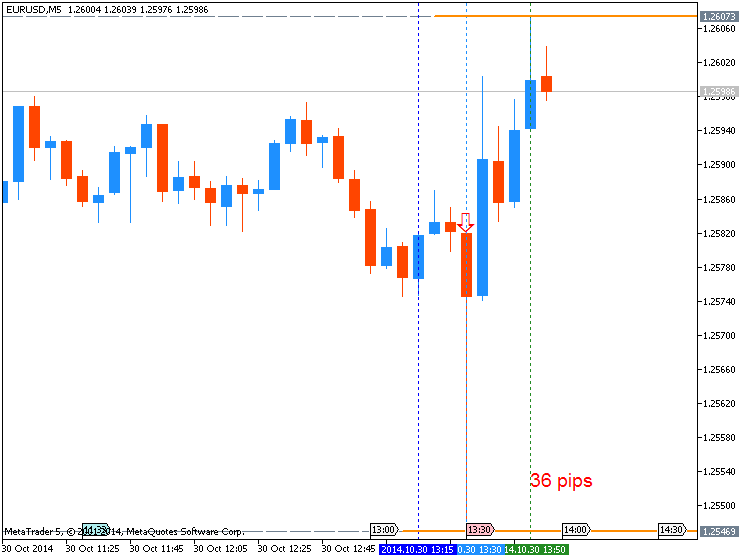 The U.S. economy advanced more-than-expected in the third-quarter, with the growth rate expanding another annualized 3.5% following the 4.6% expansion during the three-months through June. At the same time, Personal Consumption climbed 1.8% during the same period amid forecasts for a 1.9% print, while the core Personal Consumption Expenditure (PCE) narrowed to 1.4% from 2.0% in the second-quarter. Despite the better-than-expected GDP print, the Fed appears to be in no rush to normalize monetary policy as it struggles to achieve the 2% target for inflation. The initial reaction in EUR/USD was short-lived as the pair snapped back from the 1.2550 region, with the pair ending the day at 1.2602.

[AUD - Cash Rate] =Interest rate charged on overnight loans between financial intermediaries. Short term interest rates are the paramount factor in currency valuation - traders look at most other indicators merely to predict how rates will change in the future.

The Reserve Bank of Australia cut its cash rate on Tuesday at its February meeting, with the decision premised on the central bank's downgraded growth outlook and the impact of falling oil prices.

The Monetary Policy Board lowered the cash rate to 2.25 percent from 2.5 percent. The markets were divided over their expectations concerning a rate cut, although the equity market did price in a rate cut and advanced on Monday despite the broad based weakness in Asia.

Ahead of the decision, the cash rate had been maintained at 2.5 percent since August 2013.

The bank said that commodity prices declined sharply and that the price of oil has fallen significantly over the past few months.

These trends appear to reflect a combination of lower growth in demand and, more importantly, significant increases in supply. The much lower levels of energy prices will act to strengthen global output and temporarily to lower CPI inflation rates, the bank noted.

Anyway - I just copied some latest summary from this thread :

[AUD - Retail Sales] = Change in the total value of sales at the retail level. It's the primary gauge of consumer spending, which accounts for the majority of overall economic activity.

A 230K rise in U.S. Non-Farm Payrolls (NFP) accompanied by faster wage growth may heighten the appeal of the greenback and spur a short-term selloff in EUR/USD as it boosts expectations of seeing the Federal Open Market Committee (FOMC) normalize monetary policy in mid-2015. 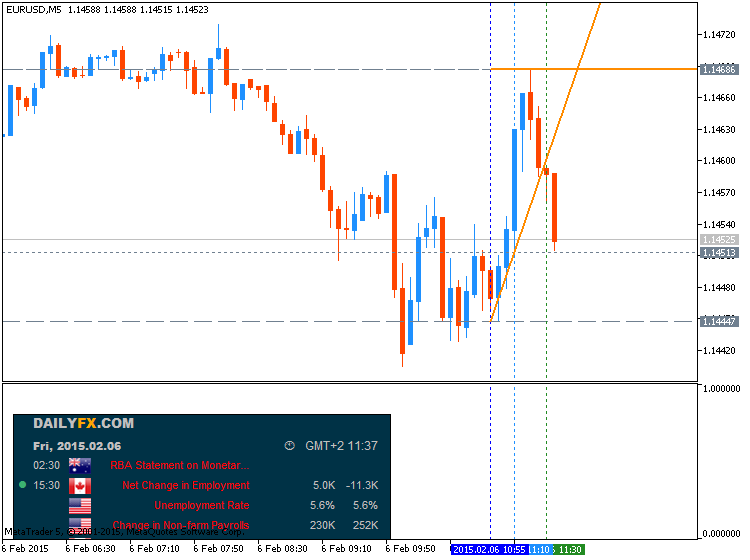 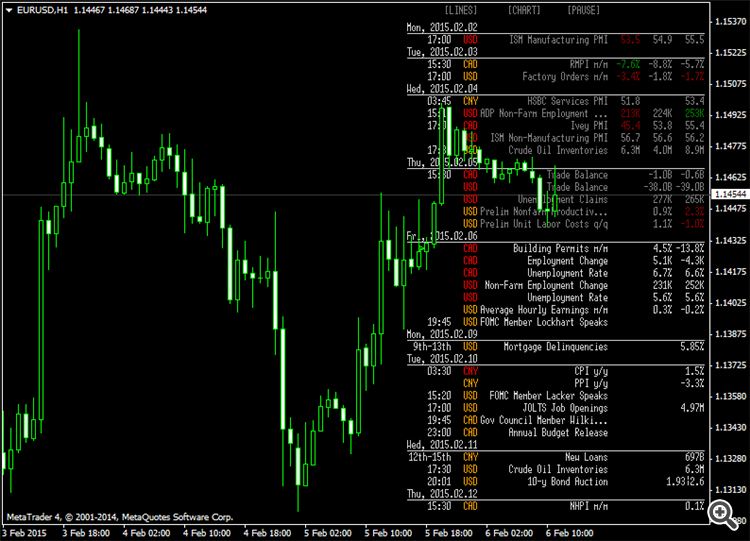 Indeed, a further improvement in labor dynamics may put increased pressure on the Fed to raise the benchmark interest rate sooner-rather-than-later, but the subdued outlook for inflation may prompt the central bank to further delay its normalization cycle as price/wage growth remains weak.

However, the rise in planned job-cuts paired with the slowdown in private-sector consumption may generate a weaker-than-expected NFP print, and a dismal employment report may generate a larger correction in EUR/USD as it drags on interest rate expectations. 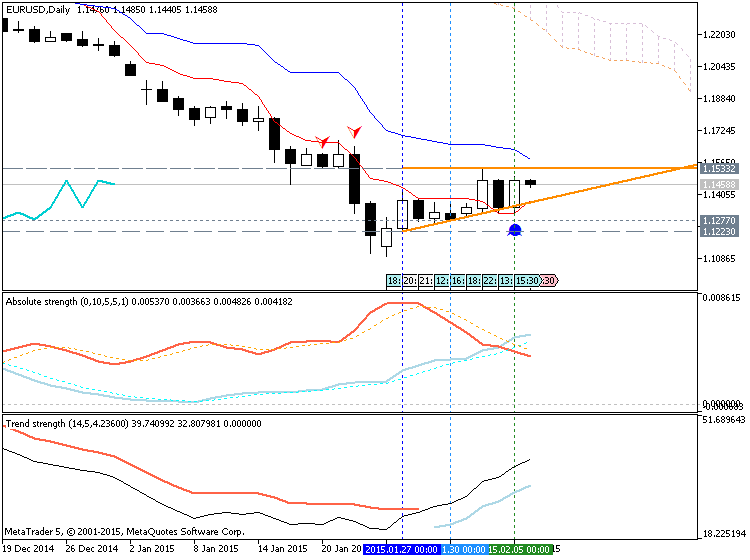 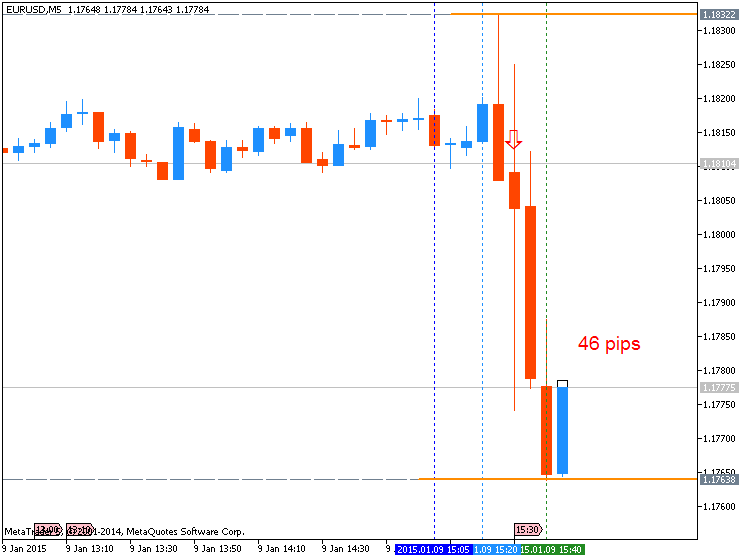 U.S. Non-Farm Payrolls (NFPs) beat market forecasts as the economy added 252K jobs in December following an upwardly revised 353K expansion the month prior. At the same time, the unemployment rate narrowed more-than-expected to an annualized 5.6% to mark the lowest reading since August 2008. However, Average Hourly Earnings unexpectedly slowed to 1.7% during the same period amid forecasts for a 2.2% print, and the weakening outlook for inflation may push the Fed to further delay its normalization cycle as it struggles to achieve the 2% target for price growth. Nevertheless, the initial bullish reaction in the greenback was short-lived as EUR/USD worked its way back above the 1.1800 handle, with the pair ending the day at 1.1839.

[EUR - France Current Account] = The current account released by the Banque de France is a net flow of current transactions, including goods, services and interest payments into and out of France. A current account surplus indicates that the flow of capital into the country exceeds the capital reduction. A high reading is seen as positive (or bullish) for the Euro, whereas a low reading is seen as negative (or bearish).

France's current account turned to a deficit in December from a surplus in the previous month, as the visible trade shortfall widened on the back of higher volume of oil imports, data from the Bank of France showed Wednesday.

The income account balances were stable. The financial account showed a deficit of EUR 16.3 billion compared to a surplus of EUR 5.1 billion in the previous month. The capital account surplus grew to EUR 0.5 billion from EUR 0.1 billion.