"The Consumer Price Index for All Urban Consumers (CPI-U) increased 0.2 percent in February on a seasonally adjusted basis, the U.S. Bureau of Labor Statistics  reported today. Over the last 12 months, the all items index was unchanged before seasonal adjustment.

The seasonally adjusted increase in the all items index was broad-based, with increases in shelter, energy, and food indexes all contributing. The energy index rose after a long series of declines, increasing 1.0 percent as the gasoline index turned up after falling in recent months. The food index, unchanged last month, also rose in February, though major grocery store food group indexes were mixed.

The index for all items less food and energy rose 0.2 percent in February, the same increase as in January. In addition to shelter, the indexes for used cars and trucks, apparel, new vehicles, tobacco, and airline fares were among those that increased. The medical care index was unchanged, while the personal care index declined.

With orders for transportation equipment showing a notable pullback, the Commerce Department released a report on Wednesday showing that new orders for U.S. manufactured durable goods unexpectedly decreased in the month of February.

The drop in orders came as a surprise to economists, who had expected orders to climb by 0.7 percent compared to the 2.8 percent jump that had been reported for the previous month.

[NZD - Building Permits] = Change in the number of new building approvals issued. It's a leading gauge of future construction activity because obtaining government approval is among the first steps in constructing a new building. Construction is important because it produces a wide-reaching ripple effect - for example, jobs are created for the construction workers, subcontractors and inspectors are hired, and various construction services are purchased by the builder.

Excluding apartments, the number of building permits dipped 1.4 percent to 1,598. Permits were issued for 160 apartments, including 28 retirement village units.

"The trend for new dwellings has more than doubled since March 2011," business indicators manager Neil Kelly said. "But it is now showing signs of decreasing after generally increasing for almost four years."

Permits had fallen 3.8 percent in January.

The total number of permits fell 0.6 percent on year in February.

USDCAD: Square longs and buy below 1.2450, sticking to the strategy of buying spot on dips rather than chasing it higher at the wrong levels.

[GBP - Manufacturing PMI] = Level of a diffusion index based on surveyed purchasing managers in the manufacturing industry. It's a leading indicator of economic health - businesses react quickly to market conditions, and their purchasing managers hold perhaps the most current and relevant insight into the company's view of the economy.

British manufacturing sector expanded at the fastest pace in eight months during March on stronger growth in production and new orders that led to increased hiring, survey results from Markit Economics and the Chartered Institute of Procurement & Supply showed Wednesday.

The Markit/CIPS Purchasing Managers' Index rose to 54.4 from 54 in February, which was revised down from 54.1. The latest reading was in line with economists' expectations.

A PMI score above 50 indicates growth in manufacturing and the British factory sector expanded for the 24th consecutive month. The average reading for the first three months of 2015, at 53.8, was the best growth outcome since the second quarter of last year, the survey said.

NFP Expectations for April (based on dailyfx article)

NFP (Non-Farm Payrolls) figures are released monthly and is one of the markets most highly anticipated events. This event tracks monthly changes in employment in the United States, and gives traders a glimpse into the health of the economy. Also, it should not be overlooked that the FED (Federal Reserve) looks to these employment numbers to influence their decisions regarding monetary policy.

Below we can see a series of the 12 previous NFP totals graphically displayed. While these numbers have been mixed, it is important to see what effects they can have on the Forex market. So how can NFP affect the market, and what are the expectations for Friday’s event?

The previous NFP event transpired last month on March 6th. To review, expectations were set at 235k, but on release the figures surprised the market. As seen in the graph above, the total amount of new jobs outside of the agricultural sector came in at 293k. This beat of expectations quickly drove traders to accumulate the US Dollar against the majority of major currencies.

Below we can see the price action for the EURUSD during the March NFP event using a 30 minute chart. Immediately after the announcement, prices formed a new lower high for the week at 1.0988. This rise in price only lasted seconds, as traders began to accumulate US Dollars on the news. This caused prices to drop as much as 118 pips over the next 30 minutes. Not only did the EURUSD decline for the day, this event caused the EURUSD to continue its trend and form a new monthly low in the following trading week.
So what can we expect for Fridays trading? 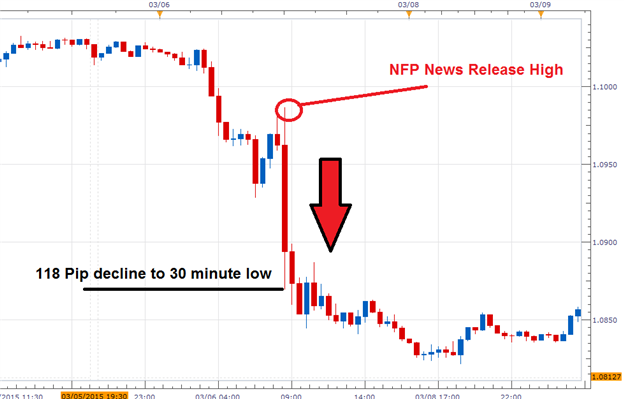 The next NFP event is set for this Friday April, 3rd at 8:30 am New York time. After reviewing last month’s release, it makes sense for traders to be on their guard for unexpected volatility at this time. Currently expectations are set for 248k. Traders should primarily focus on whether or not NFP beats or misses expectations. By using last month as a model, a beat above expectations could cause another major US Dollar rally. Conversely, if prices miss expectations, it could signal a sell off for the US Dollar against other Major G8 currencies. 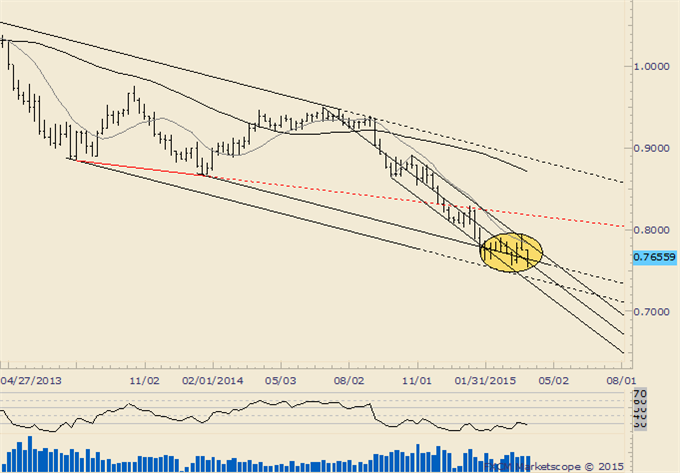 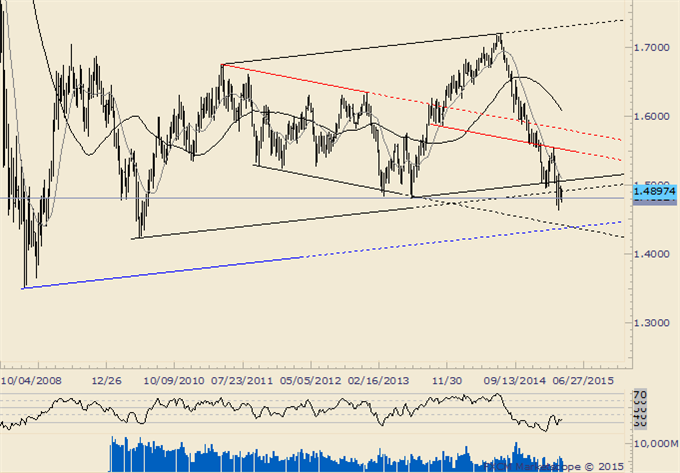 New York Fed President William Dudley and Fed Governor Jerome Powell on Wednesday sketched out scenarios in which the central bank could make an initial move earlier than many now expect and then proceed in a slow and gradual manner on further rate increases.

Yet, minutes of the Fed's March meeting showed there was a wide divergence of views among policymakers, suggesting no consensus on the timing of a move.

"The final arbiter will be the data, recent data argued for delayed rate lift-off. A June 18 rate lift-off is now being priced as quite a slim chance," said David de Garis, senior economist at NAB.

Still, the chance of a hike at all this year is a stark contrast to Europe and Japan where quantitative easing has years to run. So dollar bulls took heart and bid up the dollar index to a one-week high of 98.197, further away from Monday's trough of 96.329. It last stood at 98.063.

[CNY - CPI]  = Change in the price of goods and services purchased by consumers. Consumer prices account for a majority of overall inflation. Inflation is important to currency valuation because rising prices lead the central bank to respond by raising interest rates.

“China kicked off economic reports for the month of March in decent fashion, as CPI held steady at 1.4% beating consensus by a decimal and PPI declines stopped accelerating for the first time in 8 months.”

“Analysts are split on the implications of the latest inflation data - some see the report as beginning of stabilization that would diminish the need for PBoC to ease aggressively, while others do not see the release sufficiently significant to alter the increasingly more regular easing path.”