correlated; The method provides improved efficiency in parameters estimation problems in exchange for a tolerable amount of bias meanwhile Lasso (Least absolute shrinkage and selection operator) is a regression analysis method that performs both variable selection and regularization to enhance the prediction accuracy and interpretability of the resulting statistical model; Lasso was originally formulated for linear regression models. This simple case reveals a substantial amount about the estimator. These include its relationship to ridge regression and best subset selection and the connections  between lasso coefficient estimates and so-called soft thresholding. It also reveals that (like standard linear regression) the coefficient estimates do not need to be unique if covariates are collinear. 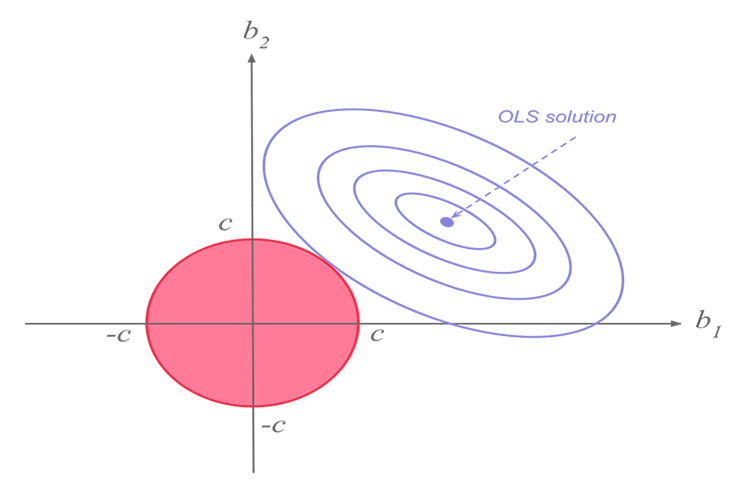 Now to understand why we need such models in the first place let's understand the term bias and variance.


What does this mean to the model?

While building the machine learning model it is really important to take care of bias and variance to avoid overfitting the model. If the model is very simple and with fewer parameters, it tends to have more bias but small variance, whereas the complex models oftentimes end up having low bias yet high variance value. so it is required to make a balance between bias and variance errors, Finding the balance between these two terms is known as the bias-variance tradeoff. 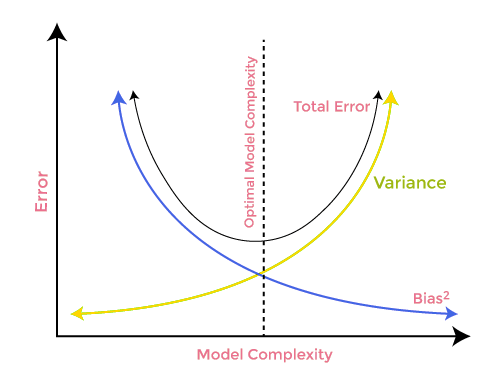 For accurate predictions of the model, algorithms need a lower bias and lower variance as well but this is practically impossible because bias and variance are negatively related to each other.
If we increase the bias, the variance will decrease and vice-versa is true

Ridge and lasso regression both are on the same mission yet they have a major difference that we will see later on, when diving into the math's and trying to figure out what makes each algorithm tick.


The idea behind ridge regression.

When we have a lot of measurements that are linearly correlated we can be confident that the least squares will do just fine work of reflecting the relationship between the independent variable and the target variable.

Take a look at the below example of mice sizes plotted against mice weight. 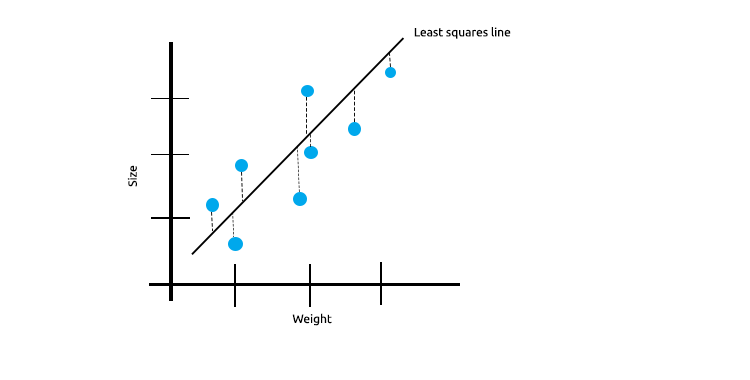 But, what if only have two measurements as our training dataset and the rest as our testing dataset, Fitting the model with the least square will result in a perfect fit that gives us a zero-sum of squared residuals. 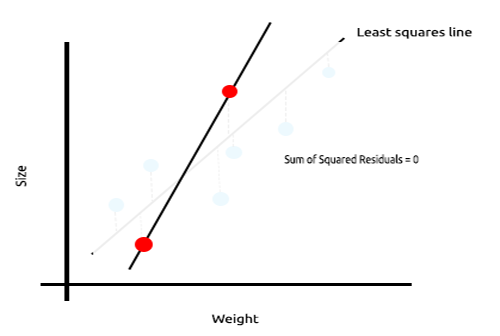 Now let's test this model on a new dataset; 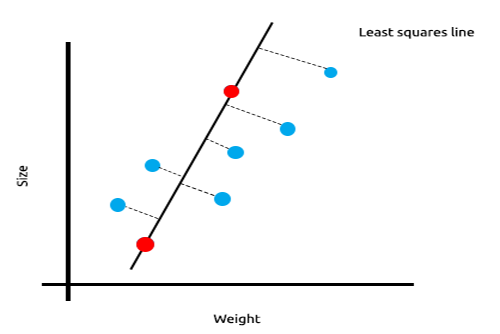 The main idea behind ridge and lasso regression is to find the model that doesn't fit the training data as well. 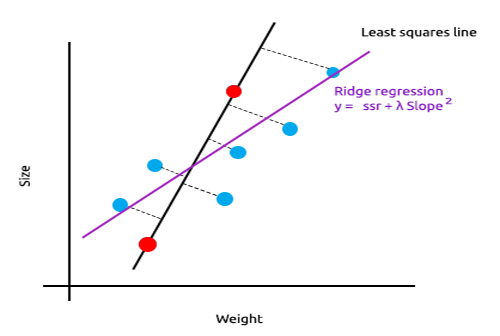 When to use these regularized models.

One may ask themselves if a least squares method/the Linear regression model can do just well why use this L1norm and L2Norm models?

To illustrate well the point I'm trying to make I have prepared the dataset full of oscillators and the volume indicator for EURUSD; 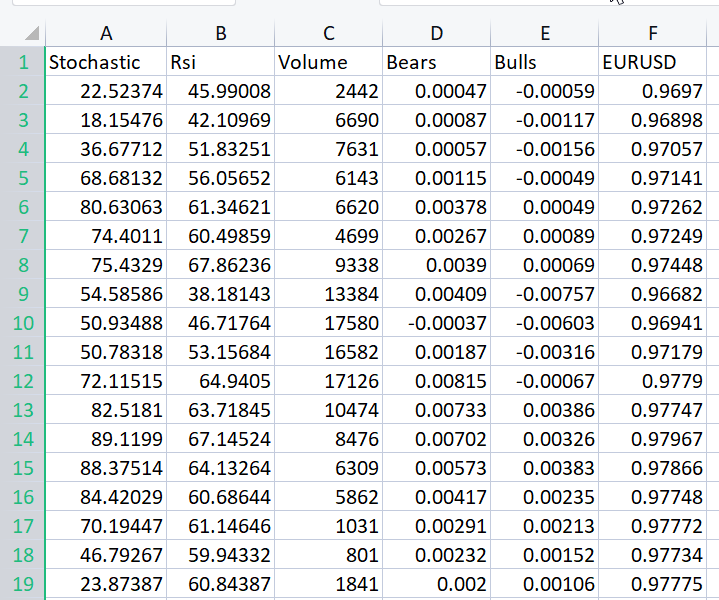 As you can see the Correlations are less than 20% for the EURUSD column against all the indicators, The stochastic indicator and the RSI seems to be best correlated than the others but only for about 14 and 15 percent respectively. Let's create a linear regression model starting with the stochastic indicator only then we will keep on adding the independent variables/ other indicators readings.

The increase of independent variables increases the variance, it is no doubt that this model will perform worse in the new dataset since it is overfitting, To solve this issue both ridge and lasso regression were introduced, as said earlier by adding some kind of bias we get a significant drop in variance.

Ridge regression itself is a method of estimating the coefficients of a linear regression model when the independent variables are highly correlated.

Analogous to the ordinary least squares estimator, the simple ridge estimator is given by

where y is the independent variable matrix, X is the design matrix, I is the identity matrix and the ridge parameter λ is the value greater than or equal to zero.

Let's write code for this:

On the function constructor, three important things get done, First is Standardizing the data. Just like the multivariable gradient descent and many other machine learning techniques, The ridge regression works in the standardized dataset, Second the data is split into x and y matrices, and lastly the Identity matrix gets created.

This function does everything as instructed by the above formula we just saw for finding the coefficients using the Ridge regression.

To see how this works let's use another dataset NASDAQ_DATA.csv that the reader of this Article series are already familiar with.

I have set the random penalty value of 0.3 for the ridge regression just so that we can see what comes out of this. Now it's time to run the function and see what coefficients come out of this;

Let's also run the Linear regression model for the same dataset and observe their coefficients too, Since the Least squares method doesn't standardize the dataset, Let's also standardize it before giving the data to the model.

The coefficients look slightly different so I guess our function works let's train and test each of the models then finally plot their respective graphs to understand more.

Since the ridge regression itself is not a model is an estimator for the coefficients which need to then be used with the linear regression model, I made some changes to the Linear regression class we  discussed in part 3.

The models have a slightly different performance when you use all the data as the training data.

When the outputs were stored and plotted in the same axis this is their graph; 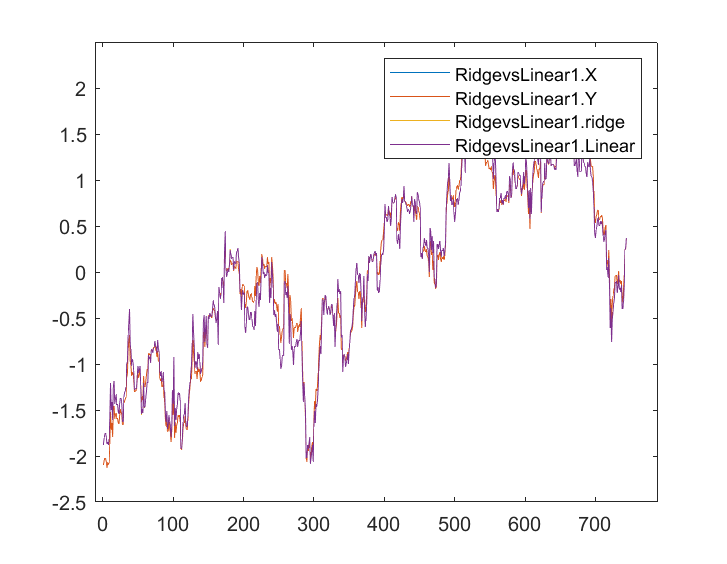 It appears that both of the models had approximately the same accuracy in training but a slight difference in the testing dataset, not bad considering the penalty that the ridge regression uses to punish the independent variables 0.3 is small and we are yet to figure out how to choose the right penalty.

To find the right values of lambda we need to use the LEAVE ONE OUT CROSS VALIDATION(LOOCV) technique, for those who are not familiar with it, this is the technique to find the optimal parameters of some of the models in ML the way it achieves this is going through all the dataset leaving I sample out of the dataset then trains the model with the rest of the dataset which is n-1 then uses the one sample that was left out as the testing sample, it goes through all the dataset up to nth samples, it finally measures the loss for all the values in each iteration finally it finds where was the minimal loss function at specific values of lambda, the one that produces the least error, is the best parameter, for more info read.

Let's import the cross-validation class to help us find the optimal value of the lambda.

Below is the code for LOOCV for Ridge regression;

Let's put this into action; 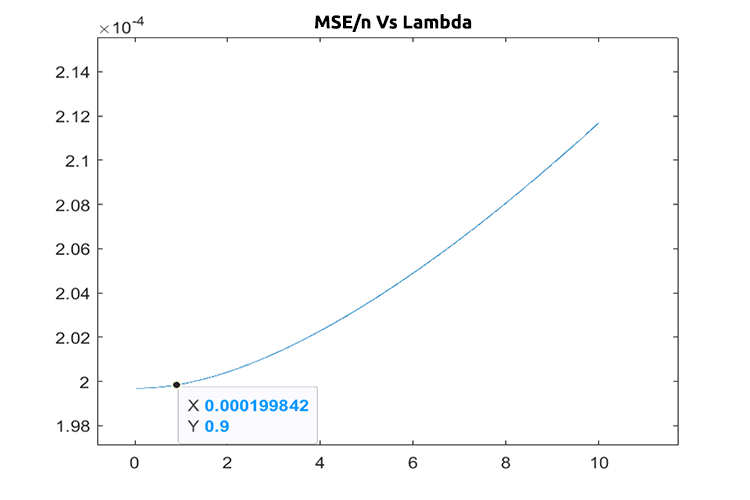 Cool, Now everything is just fine on the ridge regression part.

The ridge regression may help to avoid overfitting the regression model in cases where there are multivariable but, it is still crucial to avoid/remove unwanted variables yourself manually from the model, from our NASDAQ_DATA we could have removed the RSI column because all of us we probably know that it's not correlated to our target variable, That's it for this article there is so much stuff going on that I can't cover for now.

Attached files |
Download ZIP
MQL5.zip (142.77 KB)
Warning: All rights to these materials are reserved by MetaQuotes Ltd. Copying or reprinting of these materials in whole or in part is prohibited.