All developing/forming patterns are showing downtrend in the beginning of January (and in February too).

Trades who invested the money in gold - may have good profit in 2014, and the trades who are still keeping their short positions - they will have possibility to close it with profit in the beginning of 2014. 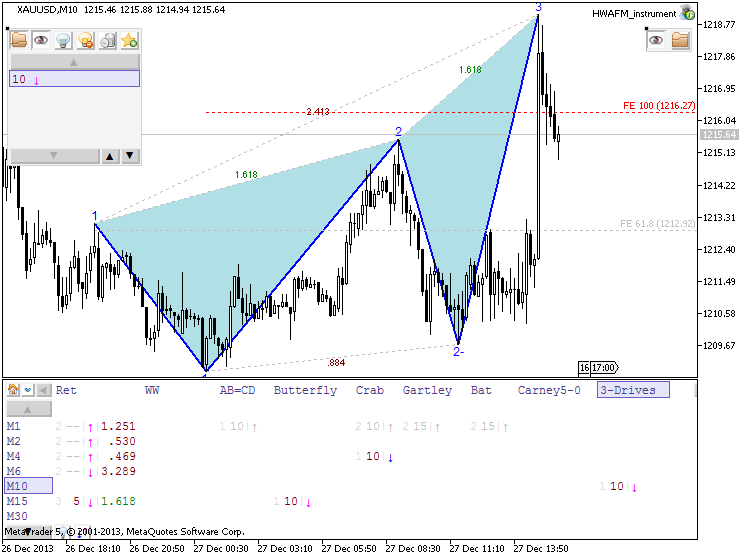 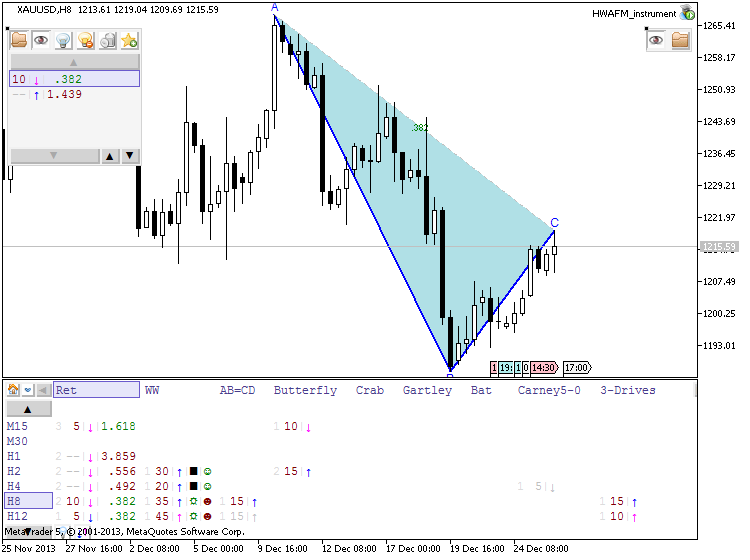 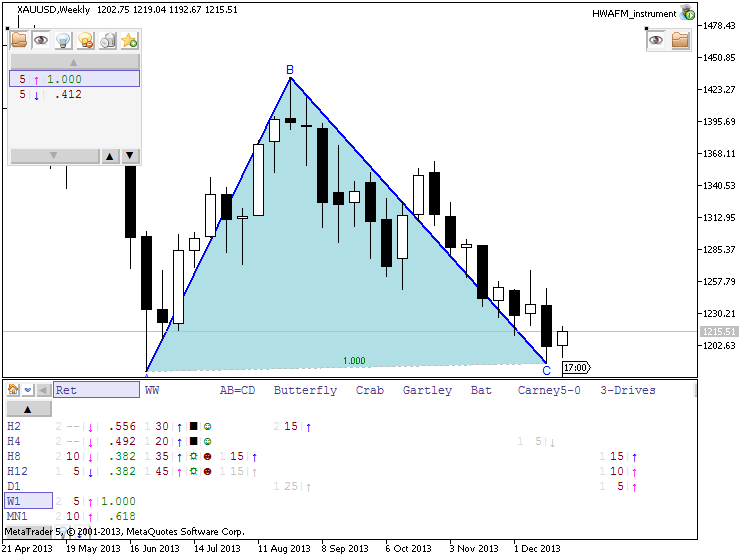 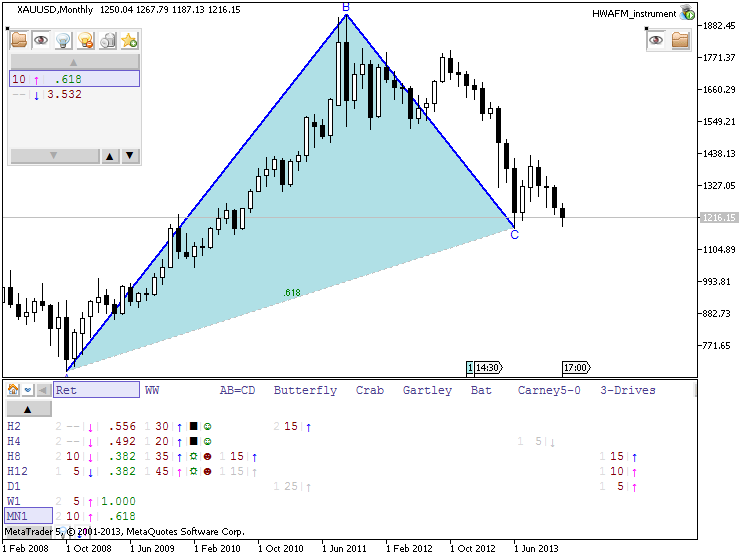 Timeframes up to M30 timeframe - uptrend, starting from H1 till MN1 - downtrend.

Why timeframes are important in our case? Well ... MN1 is monthly timeframe. One bar in MN1 timeframe = one month. Means : new bar is open in 1st of January 2014 and close in 1st of February ... so - if MN1 timeframe is showing uptrend - it is long story for at least 3 months or half a year (long term situation). M30 timeframe? One bar in M30 timeframe = 30 minutes. So, if we are having forming pattern on this timeframe - this pattern may be confirmed for half a day for example.

What is confirmation for forming pattern? Example with formed/developed pattern (for EURUSD) - Gartney 5-0 for uptrend : 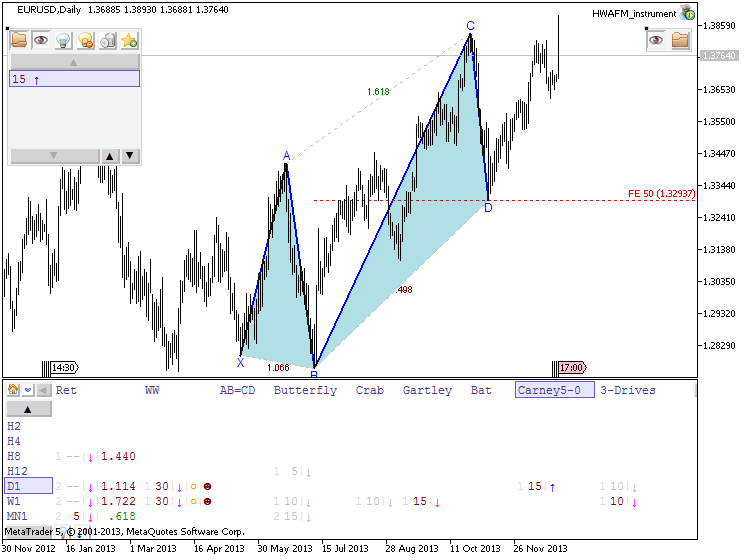 Do you see pattern? right ... and do you see how the price went to uptrend after this pattern? it is confirmation - this pattern was formed (because it was confirmed) - we expected uptrend and we see - real uptrend. It is too late to open buy trade as everything was done here. This is formed/developed pattern.

next example with forming pattern : 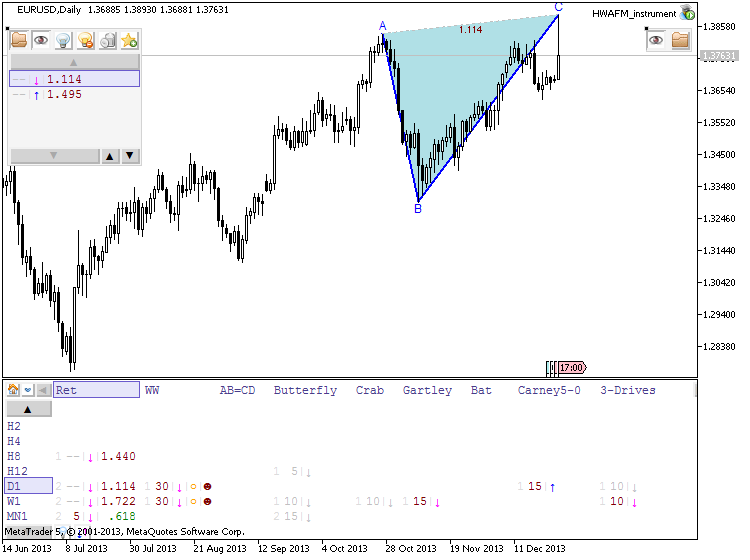 Thus, we may have uptrend in the very beginning of January 2014 and downtrend in general for this pair for at leats half a year.

Chinkou Span line came to be very close to historical price on D1 timeframe price to be ready for good breakout. But the price is still below Senkou Span A line (which is the border between primary bullish and primary bearish on the chart). So, I expect tha rally may be continuing, and the price may be stopped near 1275.83 resistance or 1298.43 resistance level. Otherwise - we may see ranging market condition within primary bearish. Explanation is on the image : 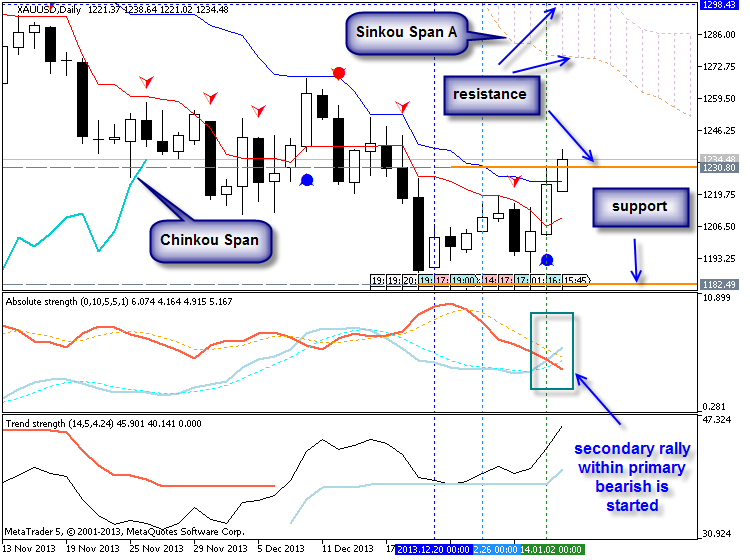 UK PMI - Construction released at 62.1 better than expected.  The potential for this event to affect exchange rates is High.  Market impact primarily affects GBP currency pairs although currency correlations may impact other currencies as well.

Well ... what I am explaining here by text and charts - it is understandable for traders. But there are traders and coders on the forum. And I think we all know that they are using different "forex english" in some cases. So, I am just translating some terms/words I am using for technical Ichimoku analysis onto "coding english" language :) :

How to predict the The secret of the USDJPY Technical Analysis 23.06

Besides, there are many signals of Ichimoku indicator to open the trades. I know about 6 signals (but it is much more signals in combination with each other):

The combination of all those 6 signals = Ichimoku indicator

U.K.'s service sector growth unexpectedly eased in December to the lowest level in six months amid weaker increase in new orders, but the rate of expansion remained robust, suggesting that economic growth has likely accelerated in the fourth quarter.

Nevertheless, optimism among service providers regarding activity over the next 12 months climbed in December to the highest level in nearly four years.

Results of the latest purchasing managers' survey conducted by Markit Economics and the Chartered Institute of Purchasing and Supply (CIPS) showed that the activity indicator for the service sector dropped to 58.8 in December from 60 in November, marking the weakest improvement in operating conditions since June.