U.K.'s service sector growth unexpectedly eased in December to the lowest level in six months amid weaker increase in new orders, but the rate of expansion remained robust, suggesting that economic growth has likely accelerated in the fourth quarter.

Nevertheless, optimism among service providers regarding activity over the next 12 months climbed in December to the highest level in nearly four years.

Results of the latest purchasing managers' survey conducted by Markit Economics and the Chartered Institute of Purchasing and Supply (CIPS) showed that the activity indicator for the service sector dropped to 58.8 in December from 60 in November, marking the weakest improvement in operating conditions since June.

Activity in the U.S. service sector unexpectedly grew at a slower rate in the month of December, according to a report released by the Institute for Supply Management on Monday.

The ISM said its non-manufacturing index edged down to 53.0 in December from 53.9 in November, although a reading above 50 still indicates growth in the service sector. With the drop, the index fell to its lowest level since hitting 52.8 in June.

Despite gold biting the dust last year, some analysts are the most bullish in a year on speculation that investors are reducing near-record bearish bets after the biggest plunge in prices since 1981. It is to be noted that gold suffered one of the worst performances in 2013 and fell to the levels that was seen only three decades ago.

According to a survey investors and some analysts are willing to take risk as they believe that gold will rise this week despite the fact that gold retreated for the first time in 13 years in 2013. This is happening as an improving economy spurring speculation the Federal Reserve would curb stimulus.

China is one of the largest consumers of gold and according to analysts purchases may rise before China’s Lunar New Year festival on Jan. 31. India which is the largest importer of gold could not import it more as the government imposed heavy duty on the imports, as it was causing huge drainage on the Forex reserves.

The poor demand from India was though compensated by Chinese demand for the yellow metal; it was not enough to boost the prices. However, this year, some analysts believe that Chinese demand will help boost prices to a great extent.

Gold Analysts and Investors Bullish About the Yellow Currency This Year - Forex Minute - Financial News | Stock Market | Trading Commodities | Binary Options Updates - Forex Minute Portal
Despite gold biting the dust last year, some analysts are the most bullish in a year on speculation that investors are reducing near-record bearish bets after the biggest plunge in prices since 1981. It is to be noted that gold suffered one of the worst performances in 2013 and fell to the levels that was seen only three decades ago. According...
XAUUSD Technical Analysis 15.12 GOLD Technical Analysis 2015, Silver Analysis Please.. 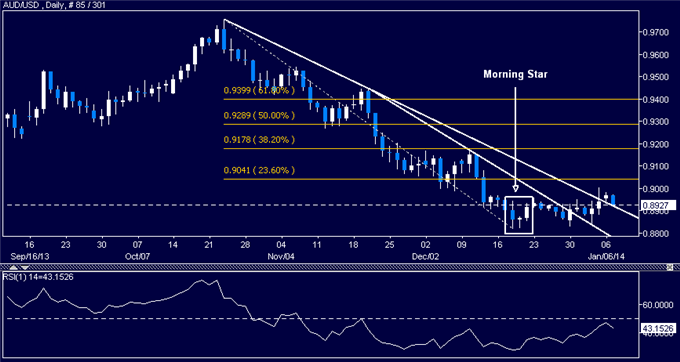 Australia's external trade in goods and services resulted in a smaller-than-expected deficit in November amid a decline in imports, a report from the Australian Bureau of Statistics revealed Tuesday.

The country's trade in goods and services showed a deficit of A$118 million in November, less than a revised A$358 million deficit in October and A$300 million shortfall expected. The deficit has now fallen for four consecutive months.

The value of imports dropped 1 percent month-on-month in seasonally adjusted terms to A$27.49 billion in November. Exports remained almost steady at A$27.38 billion.

The currency backdrop has been a clear tailwind to export revenues in the second half of 2013 relative to the first half, with exchange rate having fallen close to 15 percent between April and November, Ben Jarman, an economist with J.P. Morgan Australia, said.

he US Senate confirmed Janet Yellen’s nomination to lead the Federal Reserve when Chairman Bernanke’s term ends on January 31…but should that comfort over-exposed investors? Even those that are skeptical of the direct relationship between loose monetary policy and the robust optimism in US and global capital markets these past years cannot discount that the external support has buoyed risk trades to some degree. What happens when the recognition of that backstop’s limitations becomes the consensus? We may soon find out.

The more dramatic possibility from this change in tack is a cascading deleverage of low-yield-but-high-cost risk positions – distinctly dollar bullish. Yet, that would be a systemic change in the market’s belief system and thereby more difficult to reverse. That being said, the greenback’s safe haven appeal isn’t the only means of taking advantage. US Treasury yields and forwards rates are rising. The dollar’s ‘return’ appeal is rising at the same time the ECB and BoE outlook is growing cloudy.

Forex: Dollar, Equities Little Moved by Yellen Nomination for Fed Chair
when Chairman Bernanke’s term ends on January 31…but should that comfort over-exposed investors? Even those that are skeptical of the direct relationship between loose monetary policy and the robust optimism in US and global capital markets these past years cannot discount that the external support has buoyed risk trades to some degree. What...
Forex News 3 Central-Bank Meetings, 3 EURUSD Technical Analysis 2014,

Bitcoin bounces back in China to top $1,000 - FT.com
Bitcoin has bounced back in China, helping to push the virtual currency back above $1,000 a unit, as exchanges devise workaround solutions to the regulatory crackdown last month. When Chinese regulators banned financial institutions from doing

But the euro struggled to build on gains after data on Tuesday showed that the annual rate of inflation in the euro zone slowed to 0.8% in December from 0.9% the previous month, fuelling fresh concerns over the threat of deflation in the currency bloc.

Elsewhere, data showed that the number of people out of work in Germany fell by 15,000 in December to 2.96 million, better than expectations for a decline of 1,000.

A separate report showed that German retail sales rose 1.5% in November, more than double expectations for an increase of 0.6%.

Forex - EUR/USD dips after upbeat U.S. trade data
Investing.com - The euro edged lower against the dollar on Tuesday after data showed that the U.S. trade deficit shrank to the lowest level in four years in November. EUR/USD pulled away from session highs of 1.3656, and was last down 0.06% to 1.3620. The pair was likely to find support at 1.3580, Friday’s low and an almost four week low and...
EURUSD Technical Analysis 05.01 GBPUSD news Eur/usd

AUDUSD has turned south during Asian session despite better than expected Trade Balance numbers; -0.12B vs -0.30B. But notice that number is negative which means that more goods were important than exported, so demand for AUD was not high which is reason for lower reaction on AUDUSD.

From a technical perspective we expect weaker AUD against the buck, but price is still above that 0.8882 key level that needs to be broken for a bearish case. If we get a daily close beneath that swing that we may look for possible shorts in this week.