Nowadays, every trader must have heard of neural networks and knows how cool it is to use them. The majority believes that those who can deal with neural networks are some kind of superhuman. In this article, I will try to explain to you the neural network architecture, describe its applications and show examples of practical use.

The Concept of Neural Networks

The artificial neural networks are one of the areas in artificial intelligence research that is based on the attempts to simulate the human nervous system in its ability to learn and adapt which should allow us to build a very rough simulation of the human brain operation.

The structure of a neuron can be represented as a composition of the following units:

Neural networks have a lot of properties, with the ability to learn being the most significant one. The learning process comes down to changing the weights

here is the neuron's net input.

The net input is then transformed into the output by the activation function which we will deal with later. In a nutshell, a neural network can be viewed as a 'black box' that receives signals as inputs and outputs the result. 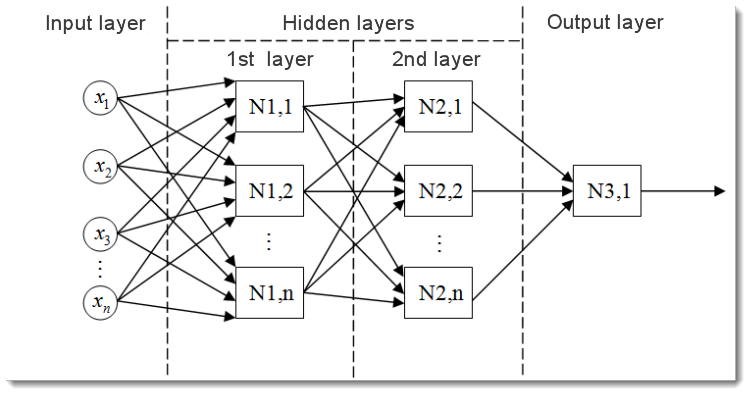 Fig. 2. The model of a multilayer neural network

This is what a multilayer neural network looks like. It comprises:

Input data normalization is the process whereby all input data is normalized, i.e. reduced to the ranges [0,1] or [-1,1]. If normalization is not performed, the input data will have an additional effect on the neuron, leading to wrong decisions. In other words, how can you compare values that have different orders of magnitude?

The normalization formula in its standard form is as follows:

Let me explain it using an example:

= 1. Now, having plugged in the values into the formula, we can calculate normalized values for any x from n input data.

This is what it looks like when implemented in MQL5:

We first specify the output value upper and lower limits and then obtain the indicator minimum and maximum values (copying data from the indicator is left out but there can be, for instance, 10 last values). Lastly, we normalize every input element (indicator values on different bars) and store the results in an array for further use.

The activation function is a function that calculates the output of a neuron. The input it receives represents the sum of all the products of the inputs and their respective weights (hereinafter "weighted sum"):

Fig. 3. The artificial neuron model with the activation function outlined

The activation function formula in its standard form is as follows:

Main types of activation functions are:

In the previous section, we have dealt with the types of activation functions. Yet there is another important thing to be considered - the slope of a function (except for the hard threshold function). Let us take a closer look at the sigmoid function.

Looking at the function graph, one can easily see that the function is smooth over the range [-5,5]. Suppose we have a network consisting of a single neuron with 10 inputs and one output. Let us now try to calculate the upper and lower values of the variable

. Every input will take a normalized value (as already mentioned in the Input Data Normalization), e.g. from the range [-1,1].

We will use the negative input values since the function is differentiable even at a negative argument. Weights will also be selected from the same range. With all possible combinations of inputs and weights, we will get the extreme values

In MQL5, the formula will look as follows:

Now we need to plot the activation function in the range as identified. Let us take the sigmoid function as an example. The easiest way to do it is using Excel. 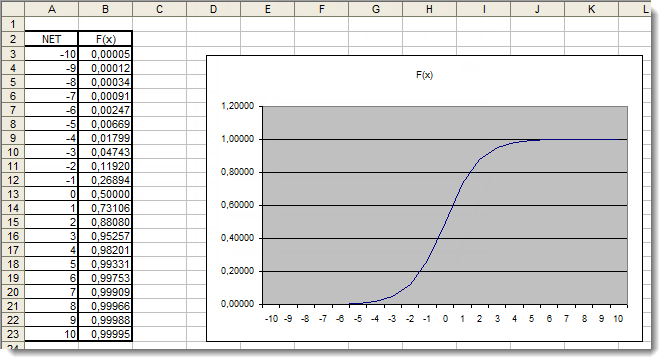 Fig. 4. The Excel graph of the sigmoid function 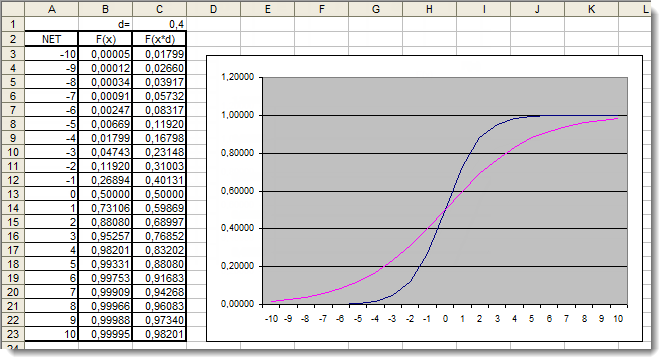 Fig. 5. The Excel graph of the sigmoid function with the additional coefficient applied

Let us once again have a look at the graphs. We have added an additional coefficient d=0.4 that changed the function shape. Comparison of the values in the table suggests that they are now more uniformly distributed. So the results can be expressed as follows:

Let us now review the hyperbolic tangent activation function. Skipping the theory covered in the review of the previous function, we get to practical application right away. The only difference here is that the output can lie in the range [-1,1]. The weighted sum can also take values from the range [-10,10]. 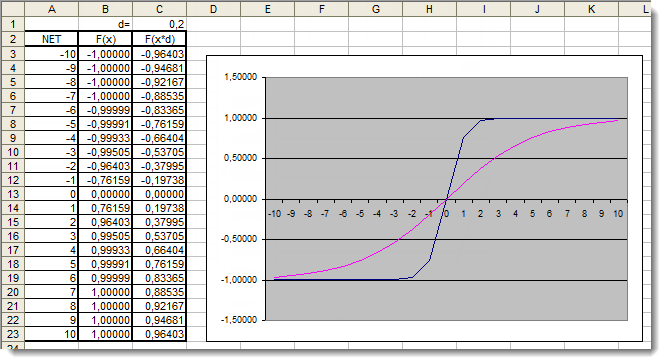 Fig. 6. The Excel graph of the hyperbolic tangent function with the additional coefficient applied

The graph shows that the shape of the function has been improved due to the use of the additional coefficient d=0.2. So the results can be expressed as follows:

In this manner, you can change and improve the shape of any activation function.

Let us look into it:

Putting It All Together

To make the implementation easier, we will take a network made up of a single neuron. It is certainly a bit of a stretch to call it a network but important is to understand the principle. After all, a multilayer neural network consists of the same neurons where the output of the previous layer of neurons serves as the input for the next layer.

We are going to use a slightly modified version of the Expert Advisor developed and introduced in the article "A Quick Start or a Short Guide for Beginners". Thus, we will for example replace the Moving Average trend indicator with the Relative Strength Index oscillator. Information on parameters of the indicator and their sequence can be found in the built-in Help.

The first thing we need to do is to train our network. Let us optimize the weights. 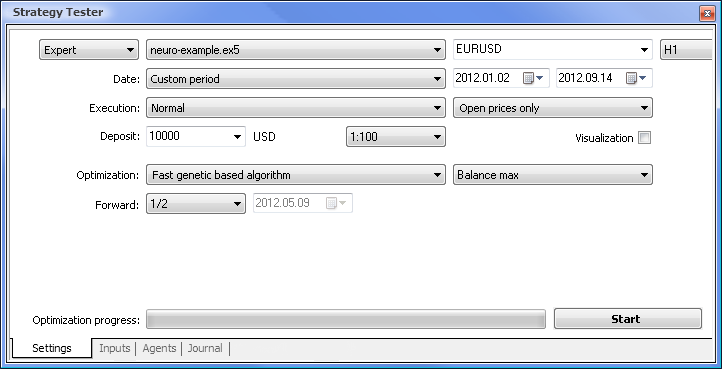 We will run the optimization using the following parameters: 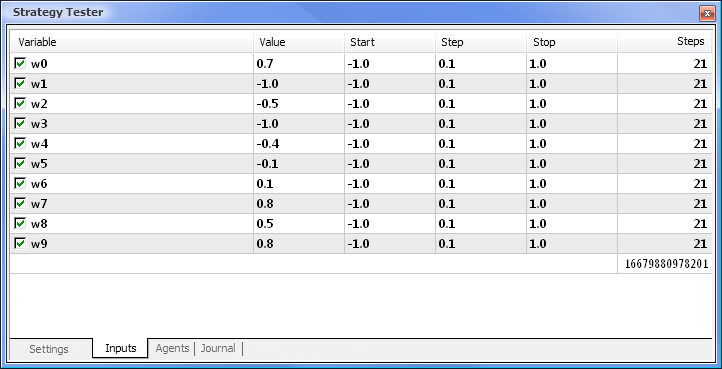 Fig. 8. Setting the parameters and their respective ranges to be optimized

The optimization will be run with respect to all weights and their ranges. Start the optimization by going back to the Settings tab and clicking on the Start button. 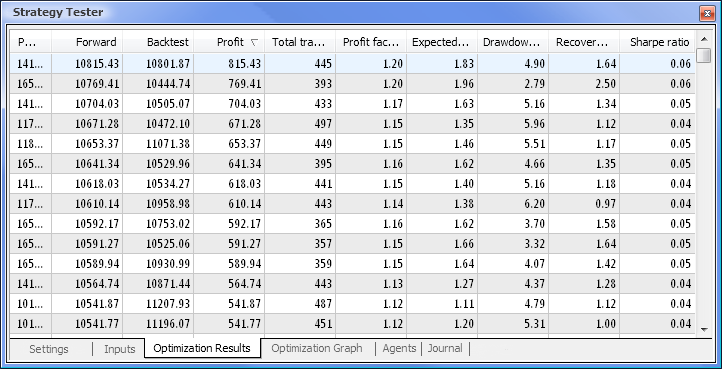 After the optimization is complete, we select the pass with the maximum profit value (to sort by one of the parameters, click on the relevant column heading) in the Optimization Results tab. You can then assess other parameters and select the desired pass, if necessary.

A double click on the required pass initiates testing the results of which are shown in the Results and Graph tabs. 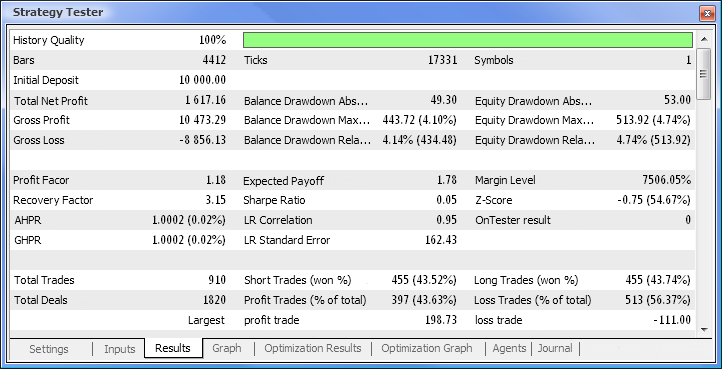 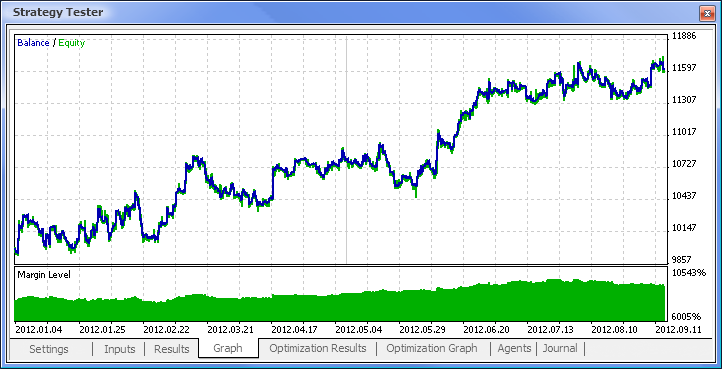 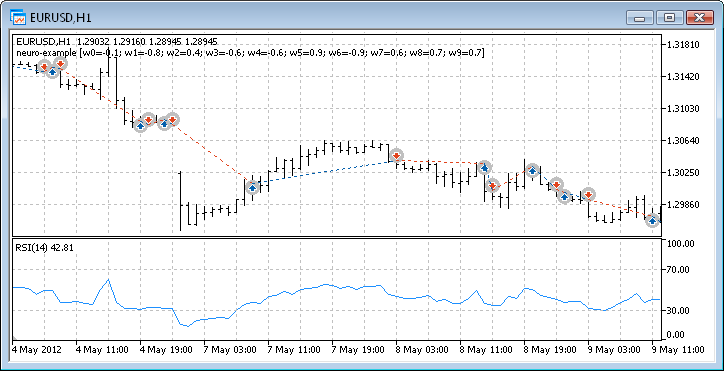 So we have finally got the results and for a start they are not bad at all. Bear in mind that we only had one neuron. The example provided is clearly primitive but we must admit that even it alone can earn profit.

Take Profit and Trailing Stop values will not be involved in the optimization as they are missing from the neural network driven EA. Both Expert Advisors that we are going to test are based on MACD with the following parameters:

You can also set the required currency pair and time frame but in our case we will leave them unchanged - EURUSD, H1, respectively. The testing period in both cases is the same: from the beginning of the year using opening prices.

Let us now compare the key parameters of the tested Expert Advisors: 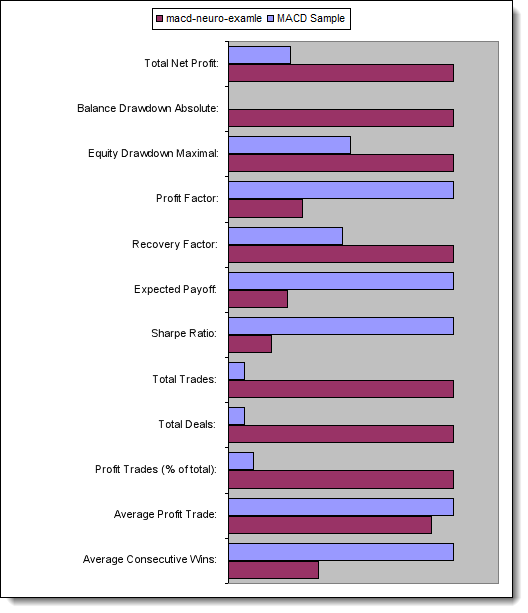 Fig. 13. Comparison of the key parameters

QuickPip
34 comments, 15 topics
| 19 Mar 2019 at 09:17
Thank you for this easily understandable introduction into AI for trading on MT5. So the 'weights' are found via optimization, what Cagatay called curve-fitting. In reality neural networks (their weights) are "trained" by inputting massive amounts of human-labelled training data and labelling the outcome as right or wrong, too. Is there an efficient way to do this in MT5?

Why do i only get 365 dollars of profit when backtesting?

The way of optimizing the network is "SMART", even when he's not using the regular "BACKPROPAGATION" algorithm.

Backpropagation adjust the weights automatically in order to reduce the output "ERROR" (or loss) to a truth value.

What is SMART about this Feed Forward Network application ?

or "Feature Extraction Problem". Following this, the solution obtained is... "Given the Trading Rules which are the Features that Perform Better, or maximize the trading output"

in this sense the problem is more about "The proper way to represent the trading situation instead of fitting a function (the regular use of Deep Learning)".

What are Features in Deep Learning ?

- The interesting thing in Deep Learning is that each network layer works as an Adjustable Linear Transformation, this allows to change the space in which the data is projected,

and that creates a new representation (new features).

MetaTrader 5 on Linux
Linux is a Unix-like computer operating system assembled under the model of free and open source software development and distribution. Linux systems are widely used in smartphones and server hardware. Many home PC users prefer it to MS Windows series. In this article, you will find out how to work in MetaTrader 5 via one of the Linux versions - Ubuntu.

MetaTrader 4 and MetaTrader 5 Trading Signals Widgets
Recently MetaTrader 4 and MetaTrader 5 user received an opportunity to become a Signals Provider and earn additional profit. Now, you can display your trading success on your web site, blog or social network page using the new widgets. The benefits of using widgets are obvious: they increase the Signals Providers' popularity, establish their reputation as successful traders, as well as attract new Subscribers. All traders placing widgets on other web sites can enjoy these benefits.