Difference Between Dow, Nasdaq and S&P 500 (based on the article)

In the U.S., market participants focus the majority of their attention on three indices – S&P 500, Dow Jones Industrial Average, and Nasdaq 100. These indices are of course highly correlated to one another as they track companies impacted by the same business cycle and other important macroeconomic factors.

Additionally, there is some cross-over in the stocks that are included in the ‘big three’. For example, the technology giant Apple Inc. (AAPL) is a constituent included in all three. However, there are big differences between the Dow and Nasdaq and S&P 500 - such as the number and type of stocks included in each index and how index values are calculated.

The S&P 500, created by Standard & Poor’s in 1962, represents the broadest measure of the U.S. economy among the three major indices. The index value is calculated by weighting each company according to its market capitalization and then a divisor, which is set by S&P, is applied to produce the final value. The simple calculation is as such: sum of the market cap of all stocks included divided by the divisor, or total market cap / divisor. 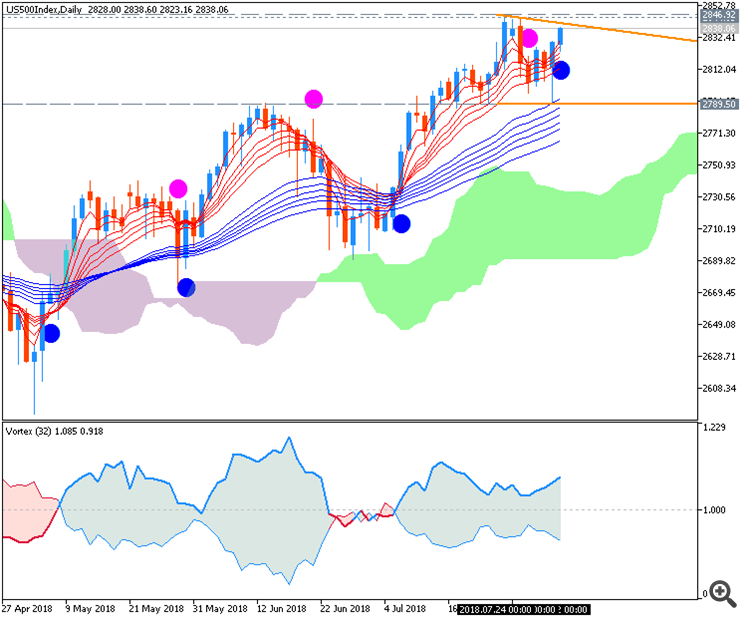 The Dow Jones Industrial Average, often referred to in short as the ‘Dow’, is the oldest index, dating back to 1896 and is the most globally well known. The Dow represents 30 large cap stocks as determined by the Wall Street Journal. Unlike the S&P 500 and the Nasdaq 100, the weighting for each component in the Dow Jones Industrial Average is ranked by share price, and then a divisor applied to create the final value. 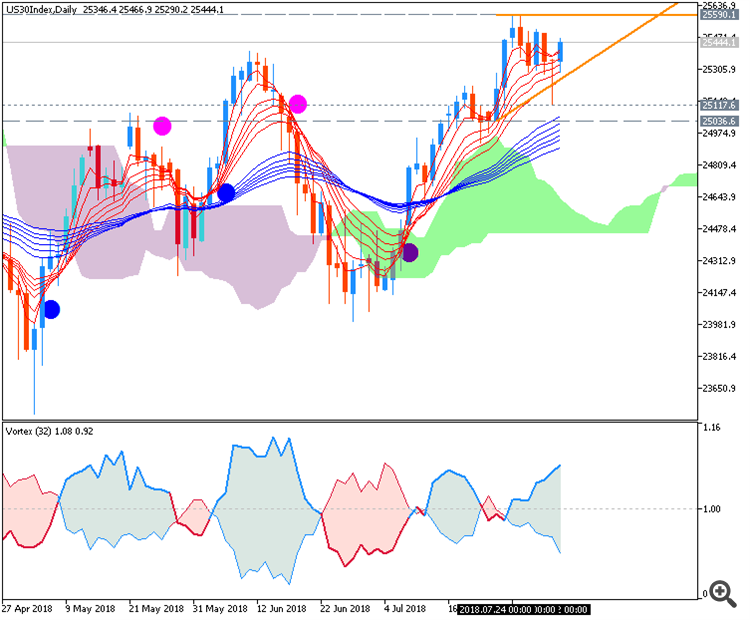 The Nasdaq 100 is the youngest of the three indices having begun trading in 1985. It represents the largest non-financial companies listed on the Nasdaq exchange and is generally regarded as a technology index given the heavy weighting given to tech-based companies. The Nasdaq 100 is based on the market capitalization of its components. 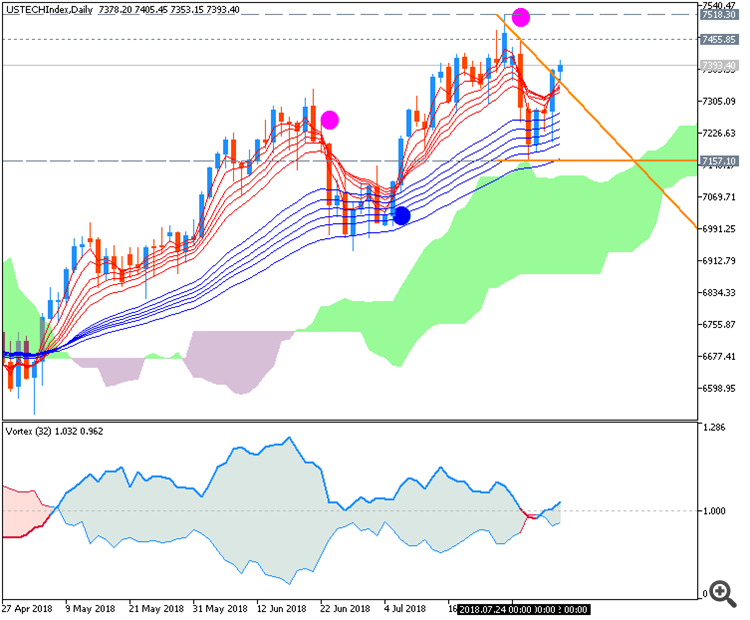 Despite the tight correlation between the major U.S. indices, they each have their own ‘personalities’ in how they trade due to the differing make-up for each index and importance of certain companies and groups of companies (sectors). The S&P 500 is the least impacted from day-to-day by any single one stock given it is comprised of so many names. With that said, there are a handful of sectors which have the most importance on the index.

Major Differences between Dow, Nasdaq and S&P 500: Breakdown of weightings - 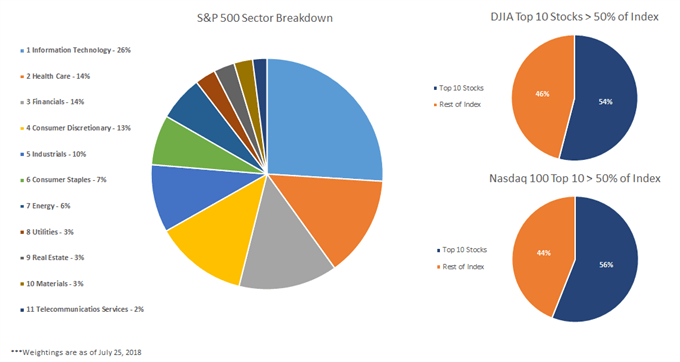 [USD - Retail Sales] = Change in the total value of sales at the retail level. 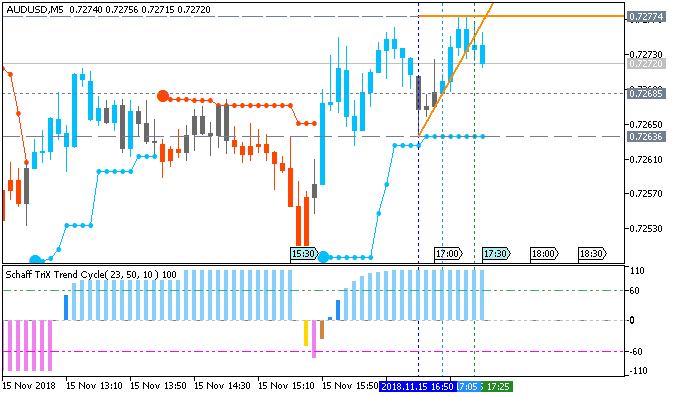 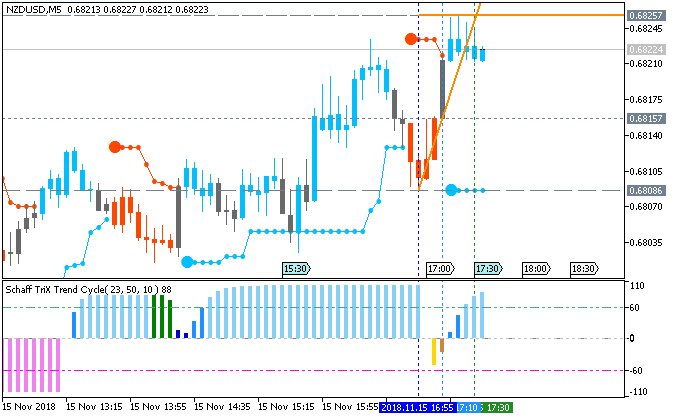 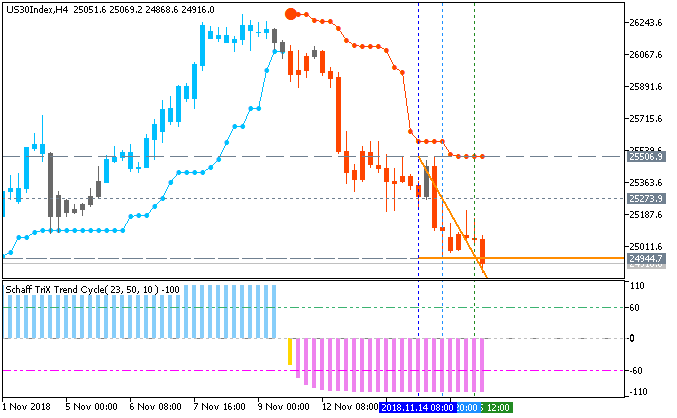 Dow Jones Industrial Average - weekly breakout with the bullish reversal; 26K level is going to be broken to above (based on the article) 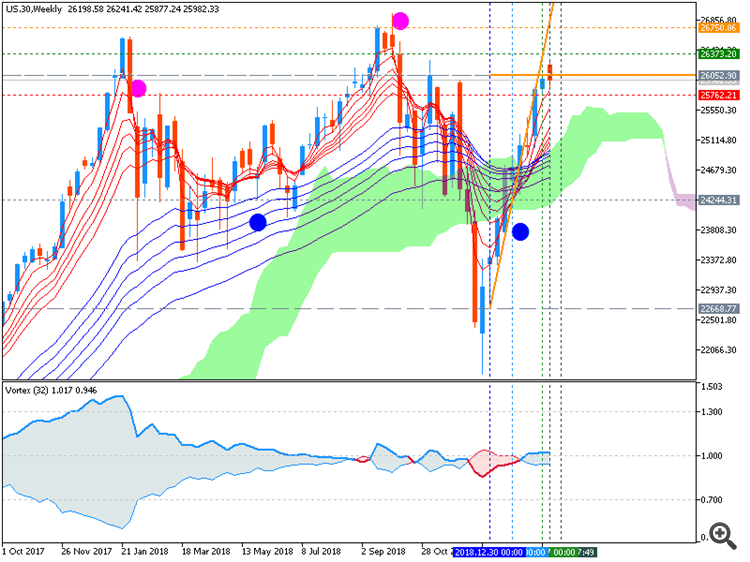 Dow Jones Industrial Average - weekly bullish ranging near bearish reversal; 26,250 level is the key for the bullish trend to be continuing (based on the article) 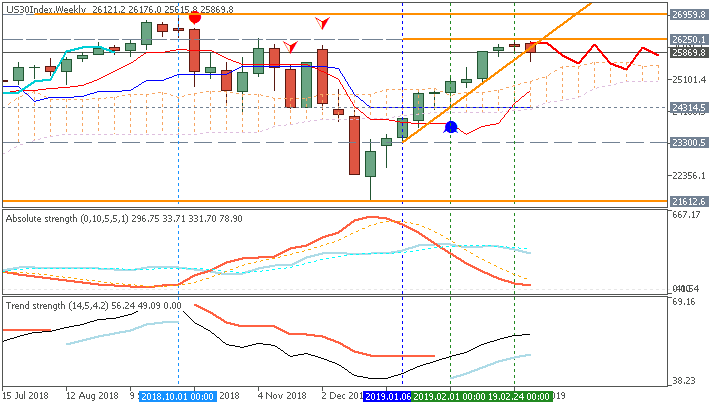 The chart was made on weekly timeframe with Ichimoku market condition setup (MT5) from this post (free to download for indicators and template) as well as the following indicators from CodeBase:

Dow Jones Industrial Average - bullish trend to be resumed; 26,982 is the key (based on  the article)

A rally in health-care stocks pushed the Dow Jones Industrial Average over 27000 for the first time after the Trump administration abandoned a plan to curb drug rebates.

The decision canceled a plan that would have eliminated rebates from government drug plans, easing concerns of a massive disruption to the U.S. pharmaceutical industry.

The Dow industrials gained 198 points, or 0.7%, to 27059, while the S&P 500 added 0.2%. The Nasdaq Composite rose 0.2%. Major U.S. indexes extended their gains from Wednesday's session, helping to reverse stocks' recent faltering amid concerns that investors were overestimating the likelihood of a rate cut. Federal Reserve Chairman Jerome Powell's dovish comments and minutes from the Fed's June policy meeting reassured traders that further easing is the most likely course of action.

Mr. Powell is speaking again on Thursday, though analysts don't expect him to provide much new information. U.S. consumer-inflation data will be in focus, as weak inflation would support the case for further monetary easing.

"Powell needs a low inflation number to bolster the rate-cut case. If it proves to be just like last week's employment read and also comes in strong, then perhaps we've all been overeager for a cut," said Mike Loewengart, head of investment strategy at E*Trade.

U.S. government-bond yields, meanwhile, extended early gains after data showed that consumer prices rose in June, a sign inflationary pressures could be stabilizing after a period of weakness. Core inflation, which strips out volatile food and energy prices, rose faster than expected. The yield on 10-year U.S. Treasurys climbed to 2.087% from 2.061% a day earlier. Bond prices and yields move in opposite directions.

and this is CVS Health (Metatrader 5):