What is statistics? Here is the definition found on Wikipedia: "Statistics is the study of the collection, organization, analysis, interpretation, and presentation of data." (Statistics). This definition suggests three main components of statistics: data collection, measurement and analysis. Data analysis appears to be especially useful for a trader as information received is provided by the broker or via a trading terminal and is already measured.

Modern traders (mostly) use technical analysis to decide whether to buy or sell. They deal with statistics in virtually everything they do when using a certain indicator or trying to predict the level of prices for the upcoming period. Indeed, a price fluctuation chart itself represents certain statistics of a share or currency in time. It is therefore very important to understand the basic principles of statistics underlying the majority of mechanisms that facilitate the decision making process for a trader.

Any statistics is the result of change in the states of the object that generates it. Let us consider a EURUSD price chart on hourly time frames: 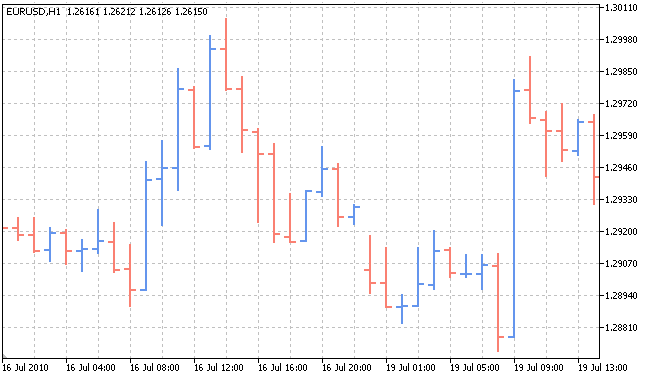 In this case, the object is the correlation between two currencies, while the statistics is their prices at every point of time. How does the correlation between two currencies affect their prices? Why do we have this price chart and not a different one at the given time interval? Why are the prices currently going down and not up? The answer to these questions is the word 'probability'. Every object, depending on probability, can take one or another value.

Let us do a simple experiment: take a coin and flip it a certain number of times, every time recording the toss outcome. Suppose we have a fair coin. Then the table for it can be as follows:

The table suggests that the coin is equally likely to come up heads or tails. Any other outcome is not possible here (landing on the coin's edge has been excluded a priori) as the sum of probabilities of all possible events shall be equal to one.

Flip the coin 10 times. Now let us look at the toss outcomes:

Why do we have these results if the coin is equally likely to land on either of the sides? The probability of the coin to land on either of the sides is indeed equal, which however does not mean that after a few tosses the coin shall land on one side as many times as on the other side. The probability only shows that in this particular attempt (toss) the coin will land either heads up or tails up and both events stand equal chances.

Let us now flip the coin 100 times. We get the new table of outcomes:

As can be seen, the numbers of outcomes are again not equal. However, 53 to 47 is the result that proves the initial probability assumptions. The coin landed on heads in nearly as many flips as it did on tails.

Now let us do the same in the reverse order. Suppose we have a coin but the probability of landing on its sides is unknown. We need to determine if it is a fair coin, i.e. the coin that is equally likely to come up heads or tails.

We can see that it is very difficult to conclude from the first experiment that the coin is fair. Let us do the same for the second experiment:

Having these results at hand, we can say with a high degree of accuracy that this is a fair coin.

This simple example allows us to draw an important conclusion: the bigger the number of experiments, the more accurately the object properties are reflected by statistics generated by the object.

Thus, statistics and probability are inextricably intertwined. Statistics represents experimental results with an object and is directly dependent on probability of the object states. Conversely, the probability of the object's states can be estimated using statistics. Here is where the main challenge for a trader lies: having data on trades over a certain period of time (statistics), to predict the price behavior for the following period of time (probability) and based on this information to make a buy or sell decision.

Therefore, getting back to the points made in Introduction, it is also important to know and understand the relationship between statistics and probability, as well as to have knowledge of risk assessment and risk situations. The latter two are however out of the scope of this article.

Let us now review the basic statistical parameters. Suppose we have data on height in cm regarding 10 people in a group:

The data set forth in the table is called sample, while the data quantity is the sample size. We will take a look at some parameters of the given sample. All parameters will be sample parameters as they result from the sample data, rather than random variable data.

To calculate the mean, we should:

Following the calculations, we get the mean value of 174.5 cm 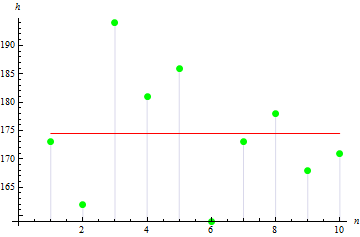 Sample variance describes how far sample values lie from the sample mean. The larger the value, the more widely the data is spread out.

To calculate the variance, we should: 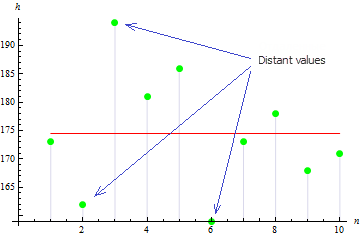 The figure suggests that 3 values are widely spread out of the mean which leads to the large variance value.

To calculate the skewness, we should:

We get a quite small value of skewness for this sample: 0.372981. This is due to the fact that divergent values compensate each other. 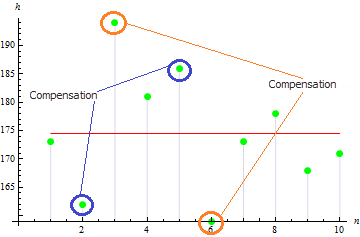 The value will be larger for asymmetrical sample. E.g. the value for the data as below will be 1.384651. 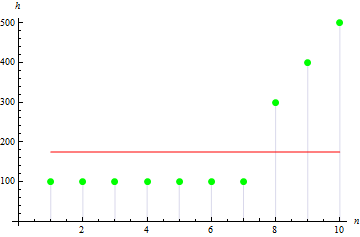 Sample kurtosis describes the peakedness of the sample.

To calculate kurtosis, we should: 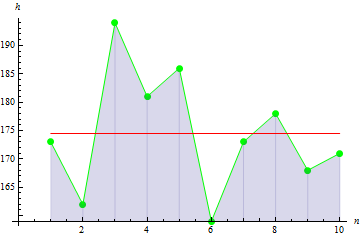 For a sharper peak data, we get a larger value: 10. 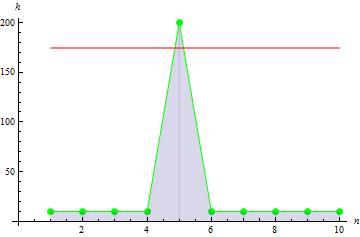 Sample covariance is a measure indicating the degree of linear dependence between two data samples. Covariance between linearly independent data will be 0.

To illustrate this parameter, we will add weight data for each of the 10 persons:

To calculate covariance of two samples, we should:

Let us calculate the covariance value of the two samples: 91.2778. The existing dependence can be shown in the combined chart: 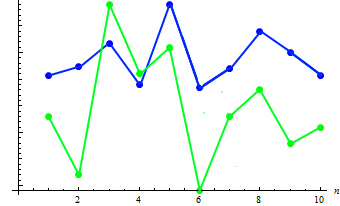 As can be seen, the increase in height (as a rule) corresponds to the decrease in weight and vice versa.

Sample correlation is also used to describe the degree of linear dependence between two data samples but its value always lies within the range of -1 to 1.

To calculate correlation of two samples, we should:

For the given height and weight data, correlation will be equal to 0.579098.

How to Use Statistics in Trading

The simplest example illustrating the use of statistical parameters in trading is the MovingAverage indicator. Its calculation requires data over a certain period of time and gives the arithmetic mean value of the price:

We can see that the indicator is a complete analog of the sample mean. Despite its simplicity, this indicator is used when calculating EMA, the exponential moving average which, in turn, is a basic element required for the MACD indicator - a classical tool for determining the trend strength and direction. 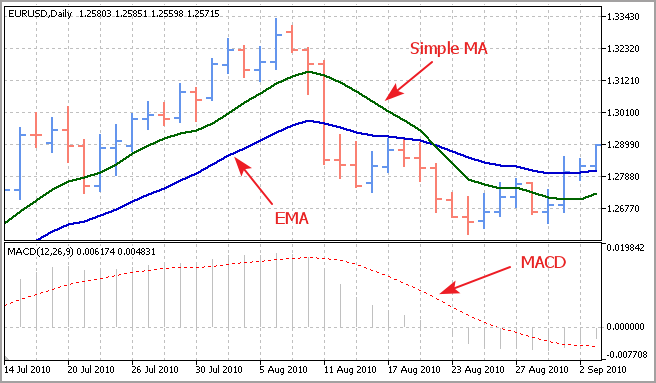 We will look at the MQL5 implementation of the basic statistical parameters described above. The statistical methods reviewed above (and a lot more) are implemented in the statistical functions library statistics.mqh. Let us review their codes.

The library function calculating the sample mean is called Average:

The library function calculating the sample variance is called Variance:

The library function calculating the sample skewness is called Asymmetry: 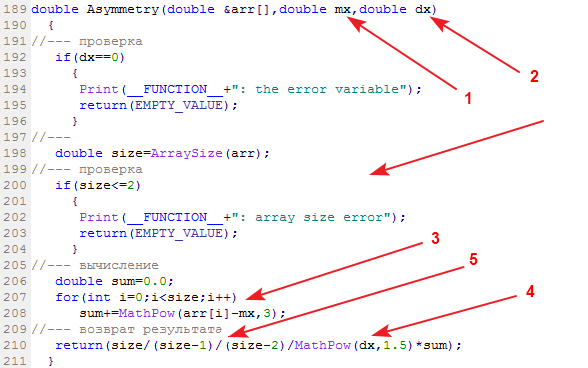 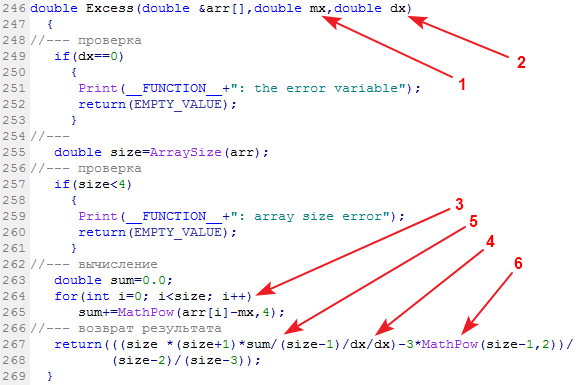 The library function calculating the sample covariance is called Cov: 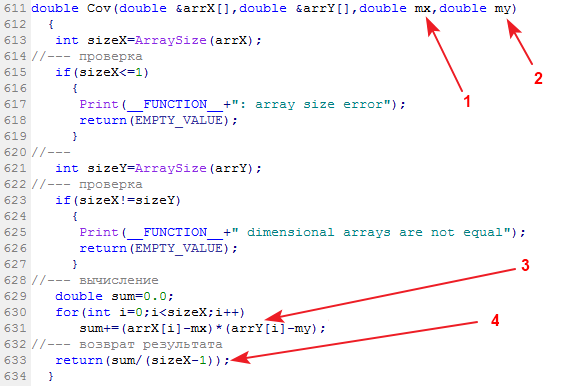 The library function calculating the sample correlation is called Corr:

Let us now input height and weight sample data and process it using the library.

After executing the script, the terminal will produce the results as follows:

The library contains a lot more functions the descriptions of which can be found in CodeBase - https://www.mql5.com/en/code/866.

Some conclusions have already been drawn at the end of the "Probability Theory and Statistics" section. In addition to the above, it would be worth mentioning that statistics, like any other branch of science, shall be studied starting with its ABCs. Even its basic elements can facilitate the understanding of a great deal of complex things, mechanisms and patterns which at the end of the day can be extremely necessary in trader's work.

How to purchase a trading robot from the MetaTrader Market and to install it?

Android and iOS powered devices offer us many features we do not even know about. One of these features is push notifications allowing us to receive personal messages, regardless of our phone number or mobile network operator. MetaTrader mobile terminal already can receive such messages right from your trading robot. You should only know MetaQuotes ID of your device. More than 9 000 000 mobile terminals have already received it.

In this article we are going to show how to explore the Standard Library of Trading Strategy Classes and how to add Custom Strategies and Filters/Signals using the Patterns-and-Models logic of the MQL5 Wizard. In the end you will be able easily add your own strategies using MetaTrader 5 standard indicators, and MQL5 Wizard will create a clean and powerful code and fully functional Expert Advisor.

This article takes us to a whole new direction in developing EAs, indicators and scripts in MQL4 and MQL5. In the future, this programming paradigm will gradually become the base standard for all traders in implementation of EAs. Using the automata-based programming paradigm, the MQL5 and MetaTrader 5 developers will be anywhere near being able to create a new language - MQL6 - and a new platform - MetaTrader 6.