How to Start with Metatrader 5 - page 89

How Social Media Affects The Forex Market (based on dailyforex article)

The Forex market, as you probably know by now, is the biggest market in the world. Yet, somehow, the average citizen, who is quite familiar with the Stock Market, has never heard of the Forex market. When you tell them Forex means the same as foreign exchange, you generally get a response similar to “Ohhh” followed by a “And what is that”?

With the size of the Forex market, and its potential for profit, you would expect it to be a much more popular and familiar market to the masses. A possible explanation of this phenomenon can be the fact that it was originally inaccessible to the average person, and only in the last decade has the Forex retail market taken off.

Having said that, the Forex market has managed to gain more exposure over the last year or two, especially on the global Web. This can be attributed mainly to social media and the presence of Forex brokers and traders on the various social networks.

It is true that the amount of Forex content on the Web continues to grow, but the way in which the primary Forex players make use of social media leaves much room for improvement. The three main social networks used in the Web community are of course Facebook, Twitter, and LinkedIn.

Before we discuss how Forex and Facebook merge, let’s take a quick look at the statistics of the largest social network on the Web. Facebook now has over 250 million users worldwide. As for content, over 1 billion new content pieces are uploaded weekly. Wouldn’t you say such numbers would yell to Forex traders all over the world to use this platform and connect with other traders?

On the other hand, Facebook was always intended not as a corporate platform but rather a place to connect on a more personal basis, so it is not as ideal as some of the other sites out there. Some of the Forex tools you might come across on Facebook include Forex groups, Forex pages, Forex traders, and Forex signals. I for one have not been exposed to any Facebook spam on the Forex topic, something I wish I could say about the Forex presence on Twitter.

As of today, Facebook is mainly used by Forex players to spread content, accumulate fans of pages, and share signals. With the advanced API and the ability to develop Facebook applications, the Facebook potential for the Forex world is much greater than what is being utilized today.

If you have been paying attention, or even if you have not, you have most probably heard the word Twitter in one context or another. It is the buzz word of the tech industry and the global Web. Everyone is talking about how Twitter is the ultimate tool when it comes to exposure, networking, and communication, yet somehow, the Forex players cannot get it right.

It is true that there are endless Twitter accounts that offer Forex content. However, generally speaking, Forex has become a word with very negative associations on Twitter, due to the tremendous number of Forex spammers on Twitter.

The content being shared by most Twitter accounts is promotional. They are trying to sell Forex software or robots, and from the short research I have done, are not seeing results. Twitter is about communicating, two way dialog, not selling something and not spamming other users.

The potential in Twitter and its use in the Forex world is literally endless. Brokers can use it to offer special bonuses to their followers, while listening and communicating with their customers as part of their customer service efforts. Online Forex portals can share their insights in the form of news, analysis, articles, or reviews of Forex products with their followers, and pay attention to their users and how they suggest improving the service.

Traders can use Twitter to communicate with other traders, and make use of others’ experience and expertise in one aspect of Forex trading or another. The platform to connect to others like you is available; people just need to learn how to use it.

If Facebook is for personal use, LinkedIn targets the corporate world. LinkedIn, with its 17 million visits per day, is the perfect place to expand your Forex reach, and so far, out of the three social networks, it is the only one that comes close, and is on the right path.

All the major experts in the Forex world run and maintain active profiles on LinkedIn, in which they share their insights and tips for other traders to see. Many big names in the Forex brokers’ arena have a serious presence on LinkedIn. Most of them have a group, in which they share all the details of their offering, content, as well as the latest developments in the market in general, and their company specifically.

However, the most important contribution of LinkedIn to the Forex world are the tens of Forex groups, which offer a perfect and spam-free (almost) environment for traders, brokers, and Forex companies to connect and communicate with one another.

In conclusion, social media has become one of, if not the biggest trend on the Web since its invention, and with the potential for profit in the Forex market, there is no reason these two superpowers should not join forces. The Forex world as a whole seems to have taken notice to the world of social media; you can find a Forex presence on any one of the social networks. However, as of now, the potential presented by social media, the one everyone is talking about, is not being utilized by the Forex world, not even close!


Good thread was started in Russian part of the forum about a year ago: How to sell your products, services and signals (in Russian language). This thread is about to share the experiance concerning how to sell/promote your signals/market products/freelance services in internet and everywhere (I mean: this is HowTo thread).

Do we enlish speaking folks need use google translate? Or will come a translation?

Just use forum translation tool which exist above every post:

We need same thread in our english part of the forum ... just hope someone will start (and I will post there as well in this case).


Just use forum translation tool which exist above every post:

We need same thread in our english part of the forum ... just hope someone will start (and I will post there as well in this case).

Sergey you are my Favourite :)

Is it an intern tool or done by google?


Sergey you are my Favourite :)

Is it an intern tool or done by google?

Some useful topic about usage of the Cloud :

How to subscribe to the Signals - step-by-step instruction (thanks to Eleni Anna Branou ):

Try to follow the instructions below, its easier to subscribe to a signal through your MT4 plaftorm:

3. Go to the search area of your MT4 platform, on the upper right corner (where the magnifying glass is), type in the name of the signal you want to subscribe and click Enter.

4. You will see lower, in the Terminal Window of your MT4 platform, the results of your search. Click on the name of the signal you want to subscribe.

5. Click on the green Subscribe for $$ USD button on the right side of your MT4's Terminal Window.

6. Select the paymet method and complete payment for your subscription.

7. In the Optons >> Signals window that opens, tick the following options:

8. In the Use no more than: ...... of your deposit (95% maximum) field below, put the percentage of your capital, you want to participate in signal's copying.

9. In the Stop if equity is less than: ...... field, put the amount of your capital, you want to preserve, or leave it empty.

10. In the Deviation/Slippage field, select an option and click OK in the Options window to close it.

11. Now you have completed the subscription process and the only thing you need is a VPS (Virtual Hosting) in order to copy the signal 24/7 without having your MT4 platform open all day long.

12. Go to your account details in the Navigator window of your MT4 platform, right click in your account number or name and select the option Register a Virtual Server.

13. In the Virtual Hosting window that opens, click Next, then Next again, select the VPS with the lower Ping, ms value (right side of window) and click Next.

14. Select your payment plan for 1, 3, 6 or 12 months, tick the: I agree to the virtual hosting service rules and the auto renewal option below (if you want) and click Next.

15. Complete your payment for the VPS Service and you are done.

Subscribing to signal, do I need HEEEELP, please, Frequently Asked Questions about

LIFEHACK FOR TRADER: FOUR BACKTESTS ARE BETTER THAN ONE 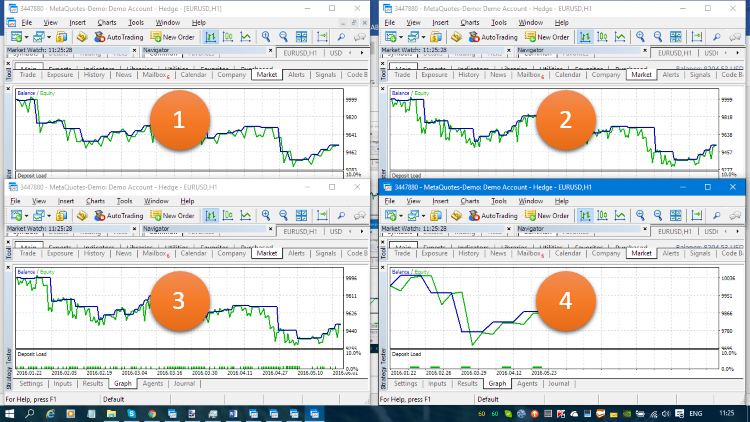 Before the first single test, every trader faces the same question — "Which of the four modes to use?" Each of the provided modes has its advantages and features, so we will do it the easy way — run all four modes at once with a single button! The article shows how to use the Win API and a little magic to see all four testing chart at the same time.

MQL5 vs QLUA - Why trading operations in MQL5 are up to 28 times faster?

Have you ever wondered how quickly your order is delivered to the exchange, how fast it is executed, and how much time your terminal needs in order to receive the operation result?

Something Interesting in Financial The incredible resilience of MT5 is great

How to migrate a signal subscription from one VPS to a new VPS? - step-by-step instruction (thanks to Eleni Anna Branou ):

How to migrate a signal subscription from one VPS to a new VPS?

You have to cancel the old VPS service and then register a new VPS and migrate your signal subscription to that.

1. Go to your account details in the Navigator window of your MT4 platform, right click in your account number or name and select the option Register a Virtual Server.

2. In the Virtual Hosting window that opens, click Next, then Next again, select the VPS with the lower Ping, ms value (right side of window) and click Next.

3. Select your payment plan for 1, 3, 6 or 12 months, tick the: I agree to the virtual hosting service rules and the auto renewal option below (if you want) and click Next.

4. Complete your payment for the VPS Service and you are done.