It will soon be a year and a half since the MQL5 Cloud Network has been launched. This leading edge event ushered in a new era of algorithmic trading - now with a couple of clicks, traders can have hundreds and thousands of computing cores at their disposal for the optimization of their trading strategies.

All issues regarding network installation, setup and structure are covered in the FAQ section on the official MQL5 Cloud Network website. And yet there is one question that has been eating many of us up: "How much?" And to answer this question once and for all we have added a special feature that allows every cloud agent customer to see how many tasks were computed over the optimization of his Expert Advisor. All you need is to go to Agents ->Tasks in your MQL5.community profile. 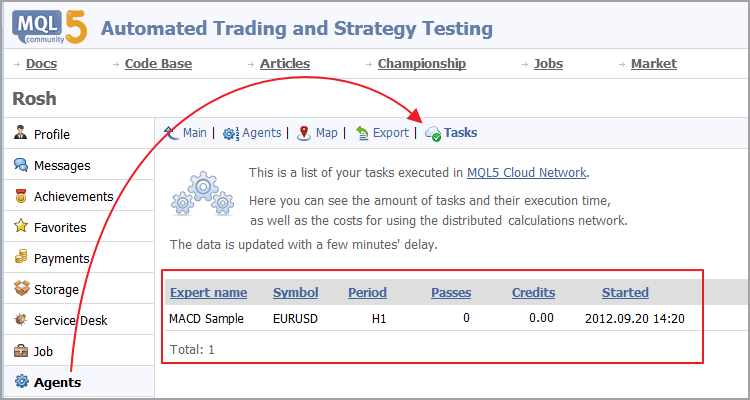 Here you will be able to see in how many passes the optimization was completed, when it was performed and how much it cost you. The Screenshot above suggests that the optimization of the Expert Advisor MACD Sample available in the standard delivery for EURUSD on H1 (symbol and time frame, respectively) began on September 20, 2012 at 14:20. The number of passes (completed tasks) at this point is zero as the screenshot was taken right at the start of the optimization.

The Figure below shows settings made for the parameter optimization.

Given the combination of the MACD Sample external parameters, the number of passes totaled over 152 billion. Even if we assume that every pass requires 1 second of time, the total optimization time will be 485 years. In the settings, select the interval from 2012.01.01 to 2012.08.01 and the tick generation mode "Every tick" as when testing in the Automated Trading Championship 2012 Automatic Tests.

The Figure above shows that 2172 tasks were distributed among the agents of the access point Europe 2 and the computing of 2168 of them has currently been completed.

The fact that the strategy tester switched to the Fast Genetic Based Algorithm can be easily verified by number 10496 displayed in the line of estimated passes. The screenshot below suggests that 2815 passes out of 10496 have been completed by now.

To monitor the optimization chart, let us switch to the corresponding tab.

How much is the computing of 4000 tasks?

Now we can find out the answer to the question asked at the beginning - how much it costs to optimize the Expert Advisor MACD Sample over the interval from 01.01.2012 to 01.08.2012 in the "Every tick" mode. We go to our profile and see the answer in the "Agents" tab being 0.23 credits.

So, we had almost 500 agents working for us for 24 minutes and it only cost us 0.23 credits. If you only had 4 local agents involved, you would have to wait (500 cloud agents * 24 minutes / 4 local agents) for 3000 minutes which makes 50 hours or a bit over 2 days for the optimization to finish. Thus, you bought 50 hours of computations for the trading strategy parameter optimization for 0.23 credits. And now think what you can buy for $0.23 in real world - not much, is it?

Decide for yourself if such speedup is worth that money!

Warning: All rights to these materials are reserved by MetaQuotes Ltd. Copying or reprinting of these materials in whole or in part is prohibited.
Last comments | Go to discussion (17)

I have 2 computers available to the cloud....... they are not used a lot, perhaps because of my location.

I quite like the idea of having other computers available in case I need results quickly, and the costs are trivial compared to the costs of having additional computers and maintaining whatever may be necessary to have them available.

This is a great service.!!


I have 2 computers available to the cloud....... they are not used a lot, perhaps because of my location.

I quite like the idea of having other computers available in case I need results quickly, and the costs are trivial compared to the costs of having additional computers and maintaining whatever may be necessary to have them available.

This is a great service.!!

I agree on the location part, I think that has something to do with it.  The central server that sends the jobs out to us local computer users I think looks at what is available in the immediate geographical area first and tries to use those.  So if someone is running a test from the US, they look for US agents first, and so on.  I also agree with the rest of the post, but for different reasons. :P

Might anybody know if the source code of your EA is distributed as part of the task ? Or is it simply some compiled code that is distributed ? ... Or neither, something else ? :)

Since its founding, the store of trading robots and technical indicators MQL5 Market has already attracted more than 250 developers who have published 580 products. The first quarter of 2013 has turned out to be quite successful for some MQL5 Market sellers who have managed to make handsome profit by selling their products.

We will present a modified version of the Expert Advisor from the previous article "MQL5 Cookbook: Position Properties on the Custom Info Panel". Some of the issues we will address include getting data from bars, checking for new bar events on the current symbol, including a trade class of the Standard Library to a file, creating a function to search for trading signals and a function for executing trading operations, as well as determining trade events in the OnTrade() function.

The article covers everything you can do with strings in MQL5. It should be of interest primarily to novice MQL5 programmers, while experienced developers will have a good opportunity to summarize and systematize their knowledge.

MQL5 Cookbook: How to Avoid Errors When Setting/Modifying Trade Levels

In continuation of our work on the Expert Advisor from the previous article of the series called "MQL5 Cookbook: Analyzing Position Properties in the MetaTrader 5 Strategy Tester", we will enhance it with a whole lot of useful functions, as well as improve and optimize the existing ones. The Expert Advisor will this time have external parameters that can be optimized in the MetaTrader 5 Strategy Tester and will in some ways resemble a simple trading system.