The Mass Index (MI) is intended for detection of trend reversals based on changes in the bandwidth between the highest and the lowest prices.

If the bandwidth expands, the Mass Index increases, if it narrows, the index decreases. The Mass Index was popularized by Tushar Chande and Donald Dorsey.

According to D. Dorsey, the most important signal from the Mass Index should be a special model constructed by the indicator and called 'reversal bulge'. The reversal bulge is formed when the 25-period mass index, first, exceeds 27 and then falls below 26.5. In this case, the price turn is very possible independently on the general nature of the trend, i.e., it does not matter, whether prices move up, down or fluctuate within the trading range.

Not only EMA smoothing can be used in this indicator. It is possible to change the smoothing algorithm out of ten possible variants:

It should be noted that Phase type parameters for different smoothing algorithms have completely different meaning. For JMA it is an external Phase variable changing from -100 to +100. For T3 it is a smoothing ratio multiplied by 100 for better visualization, for VIDYA it is a CMO oscillator period and for AMA it is a slow EMA period. In other algorithms these parameters do not affect smoothing. For AMA fast EMA period is a fixed value and is equal to 2 by default. The ratio of raising to the power is also equal to 2 for AMA.

This indicator was first implemented in MQL4 and published in Code Base 08.02.2007. 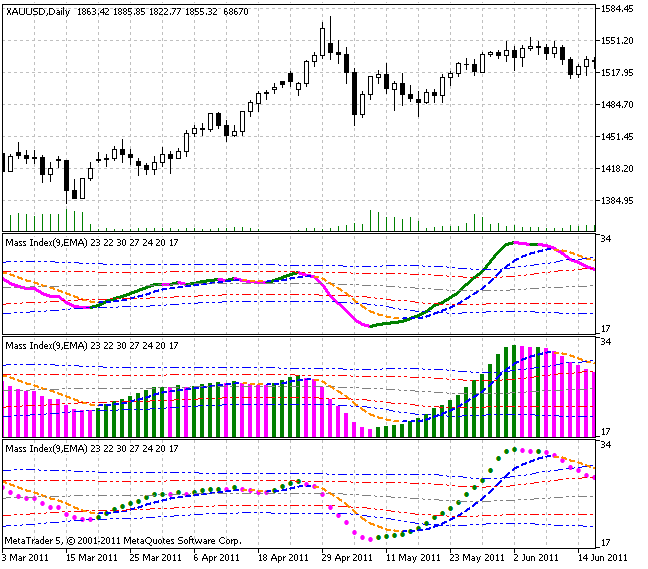 The current time position in relation to the beginning and the end of the bar is shown. In addition the ratio between the time passed since the beginning of the bar and the whole bar duration expressed in percents is given. It is useful for choosing the moment of making a trade decision.

Swing Index is a math expression of the operations activity for the last two bars.

Range Expansion Index (REI) is an oscillator that measures price changing rate and signals about overbought/oversold areas, in case a price shows weakness or strength.