Since the first Automated Trading Championship we have seen plenty of trading robots in our TOP-10 created with the use of various methods. Excellent results were shown both by the Exper Advisors based on standard indicators, and complicated analytical complexes with weekly automatic optimization of their own parameters. But still we have never seen an Expert Advisor based on the wave theory competing with trading robots based on neural networks and enhanced mathematical models. The author of this unusual trading robot Andrey Bobryashov (tmt0086) believes that there is nothing difficult in that.

Andrey, please, tell us a little about yourself

I came to know Forex not so long ago but, frankly, I have not found anything complicated in this "inexact" science. I got to know one of the forum users a year ago who familiarized me with his seven years experience full of victories and defeats. I am a student of the civil engineering university.

You are very lucky. Not every trader begins his career exploring the real experience of a practicing colleague. How did this happen?

Lucky is not quite the right word. As one wise man would say, "like calls to like". Therefore, our acquintance was inevitable. It was just a question of time. He had also received a great experience in his turn, while working with widely known Alexander Gerchik for several years.

So, is you tutor a Forex trader or does he work with stock market instruments like Gerchik?

We work only at Forex. 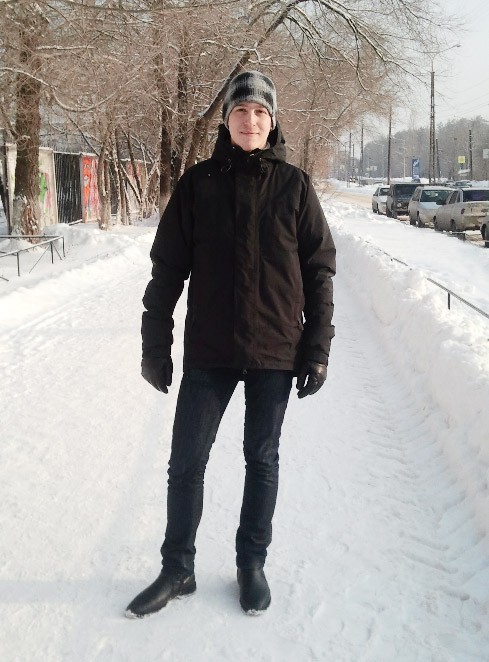 The Expert Advisor description states as follows: "Testing was performed by evatraders.com club participants". Is your strategy based on the wave theory?

Not exactly. The strategy is based on the levels breakout using the standard ABC formation, but orders are placed not at extreme values but at the breakout levels of the "Folding Rule" less than Time Frame. The Folding Rule is used in a simplified form described at one of the forums by trader "Teon" who also took part in the trading robot development. The forthcoming evatraders.com project is called Eva in honor of the newly born and very lovely niece of the project founder who is crazy about wave analysis, by the way.

We think, a plenty of very interesting information has fallen now on our readers. Can you explain in a few words what the "Folding Rule" is and where our readers can find additional information?

That is an excellent question. The Folding Rule is a very simple strategy that can be mastered by any trader. If you want to know more right now, you may google it but I'm going to issue a detailed description of the strategy and the Expert Advisor at the above mentioned web portal.

It's great that you are ready to share your experience. But can you say in a few words, if the Folding Rule is a kind of Wave Analysis?

The Folding Rule can be called the Wave Analysis for "dummies". The breakout of the Rule is a wave cycle end signal. Generally, it should be noted that absolutely any strategy is based on wave cycles directly or indirectly. It is Newton's third law.

It is said that Wave Analysis is mostly an art than a science. And creation of an automatic trading system based on it is a very complicated task. How have you managed to do that?

Indeed, the wave analysis is an art or a creative work, to be exact. Construction of the waves is like a picture painting. It always has an alternative interpretation. It seems that the disputes of wave analytics about the waves construction will continue until the market exists.

An attempt to program the wave analysis in its classical form is sheer madness, of course. I took the Folding Rule as a basis of a wave end and checked it using the tester. The robot was trading having profitable and loss-making trades successively. Then I added money management and ABC and received much better result.

That sounds comforting, especially if we consider that the only known wave layout indicator from the article works for quite a long time. What do you think about it?

I've seen lots of indicators but I don't know this one. That was a tremendous work and I'm thankful for the author. As for the count itself... Any wave formation can be criticized. For example, in this picture from the article the third wave should be located where the fifth is, while the latter must be at the extreme top. 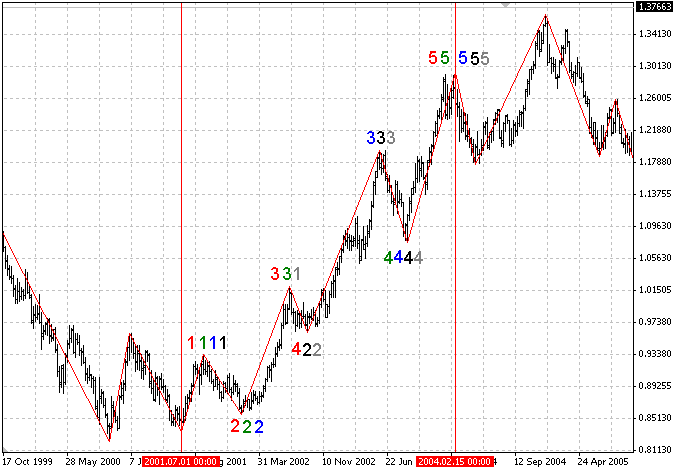 Not everyone can be a wave analyst. It's not a strategy, it's a state of mind.

Your Expert Advisor works with EURUSD M5. Can the analysis be performed on such a small timeframe?

The trading robot analyzes all timeframes up to H1, M5 is used to open positions. All timeframes from M5 to H1 inclusively are used.

Do you have a good knowledge of MQL5 language? Do you have any experience working with some other programming languages?

The Nobel Prize awaits me on my life path, cities will be named in my honor and I have four wisdom teeth in a row, which do not require removal. Do I have a good knowledge of MQL5 language? I'm on close terms with it. I worked in Java, Delphi and C++. MQL5 has turned out to be very easy language. Besides, it is substantially enhanced and easy to acquire by ordinary users in comparison with MQL4.

Traders usually say the opposite - that MQL5 is harder than MQL4. What do you use - classes, custom libraries?

I use Standard libraries. That is the advantage of MQL5 over MQL4. For example, a simple Expert Advisor can be created based on Moving Average using MQL5 Wizard. And it can be much more profitable than the trading robots that are now holding leading positions at the current Championship. But for complex processes it is better to write everything by yourself, of course.

How long and what exactly have you been writing in MQL5?

If the brokers allowed to trade PAMM accounts using MetaTrader 5, I'd got acquainted with MQL5 earlier. I started studying the language and improving the trading robot a month before the Championship. One week from that month was spent to correct parameters to satisfy the trading conditions of your MetaQuotes-Demo server.

Your Expert Advisor always trades by the maximum lot value. So, where is the money management here?

The money management is implemented in the lot size and in an error margin of each market entry signal. When a stop loss is activated, the Expert Advisor narrows the error margin level and switches to the flat mode. As for the trading volume of 5 lots, that was my fault. I examined participation conditions very briefly and set the maximum 5 lots in the settings, though I could stretch the money management for several deals having the common volume of 15 lots.

What is the principle of your Trailing Stop?

Trailing Stop moves by the number of points determined in the settings. Conditions are set manually depending on market conditions.

But the Expert Advisor works without any external control. What do you mean "set manually"?

We analyze the market and set only one parameter. That is the size of an expected profit. As you know, the market volatility varies depending on the time of a year. This fact was considered before the robot was submitted for the Championship.

And what about other currency pairs? Is the Folding Rule not so suitable for them?

Any currency pair, metals, stocks, futures or options are suitable but the more volatile is a trading instrument, the less is the number of false signals.

But why haven't you made a multi-currency Expert Advisor then?

Testing at EURUSD showed the best results during the strategy development. Now, I'm going to make a multi-currency Expert Advisor and submit it for the next Championship.

The percentage value of profitable long deals is much lower than the value of short ones. What was the result during automatic verifications?

Forex is a spontaneous market and the ratio of Long and Short deals proves that once again. According to our assumptions concerning the Eurozone fate, the number of short deals should have comprised approximately 90% but that does not refer to algorithmic trading already.

The robot easily passed automatic verification having $72 000 of profit, maximum drawdown equal to 20.54%, one hundred short trades and 113 long ones. Despite the fact that I'm fully satisfied by the robots work, I think that its victory in the Championship is improbable, as time is running out.

Have you studied the previous year Championships?

Alas, I've had no time for that.

Three weeks have left before the end of the Championship. Can you name any participants you liked? Who is worthy enough of being the winner from your point of view?

I like the trading robot of AAA777 from Belarus. As for the now leading participants, I can't name any of them in particular. Almost any trading robot with aggressive money management that dropped out during the first week could take their place. Such money management is like a monkey that slipped on a banana peel and screwed the neck.

What is needed to make the Expert Advisor that is not just fitted in the tester and can evaluate the market adequately?

Mathematically correct algorithm with a right expected value. By default, a trading robot can't lose but we still can't be sure that it will be profitable. If an expected value is correct, the trading result will always be located around zero and only in that case we may start its optimization using history.

Are you satisfied by the work of your Expert Advisor at the Championship? Or may be you would have made some changes, if you had had such a possibility?

I would have fixed some settings concerning flat, but generally I'm satisfied by my trading robot.

Do you think this Championship has been useful for you personally?

Participation in the Championship is like a sport competition for me. It is an enormous pleasure for me to watch it regularly but I think, the most exciting moments are still ahead.

Can you make any predictions about the Championship results?

I can't make any predictions about that. In any competition the strongest must win. I wish victory and good luck in December to all the Participants!

Thank you for the interview, Andrey. Good luck!

It was only this summer that Vitaly Antonov (beast) has learned about the upcoming Automated Trading Championship and got to know MetaTrader 5 terminal. Time was running out, besides, Vitaly was a newcomer. So, he randomly chose GBPUSD currency pair to develop his trading system. And the choice turned out to be successful. It would have been impossible to use other symbols with the strategy.

The Basics of Object-Oriented Programming

You don't need to know what are polymorphism, encapsulation, etc. all about in to use object-oriented programming (OOP)... you may simply use these features. This article covers the basics of OOP with hands-on examples.

The task of writing an Expert Advisor trading on multiple currency pairs is complex both in terms of finding suitable strategies and from the technological side. But if the goal is set clear, nothing is impossible then. It was four times already that Vitaly Mazurenko (notused) submitted his multi-currency Expert Advisor. It seems, he has managed to find the right way this time.