The trading robot of Sergey Abramov (26405) is staying in TOP-10 since the second week. However, it caused much anxiety for its developer. As it turned out, the robot contains a small error in position close block. The robot has been developed almost exclusively on the basis of the past years' results.

Hello, Sergey! We wanted to talk to you for quite a while already but you have not appeared on the web site.

Hello! I spend too much time at work and sometimes do not have enough time even to examine the chart. Besides, I felt a little exhausted during the last week before the Championship.

It must be your first participation in the Automated Trading Championship. How long have you been in trading already?

Yes, this is my first Championship though I know about it for quite a long time. I started my trading activity since 2004. The first experience was not a pleasant one. I lost 5 000 due to my fund manager's incompetence though we even managed to share some profit before that. After that, I started developing trading robots turning it into my hobby. Trading robots behaved not so well on real accounts due to requotes, etc. I decided to participate in the Championship because of MQL5, as I needed some motivation to learn a new language.

Why is your Expert Advisor called CCCР (USSR)?

As I've already said, programming of trading robots is my hobby. I mean, it is the thing that I do just because I like it. Therefore, the memories of the country I was born in also evoke positive emotions. :)

Why have you started developing robots right away? No time to sit in front of the monitor?

The markets are closed on weekends. Sometimes, I even do not have time to sit at my computer on Friday evenings. However, I have a real account and I even do some trading at times. 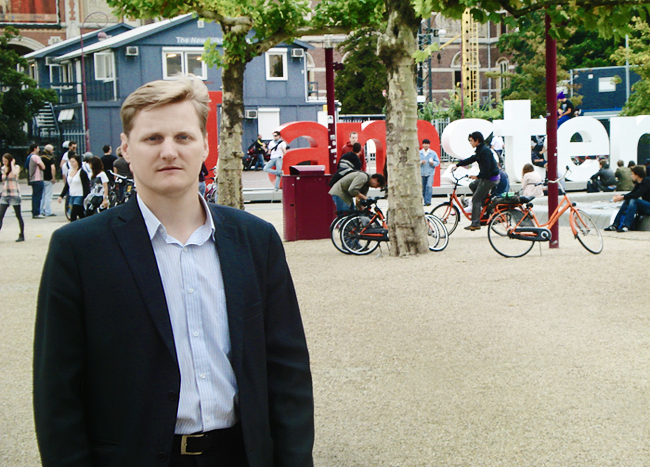 You've said that programming of Expert Advisors is a hobby for you. Does this mean that you do not treat it seriously?

What set of skills and personality traits are critical to do algorithmic trading?

You should be good at logical thinking to develop algorithms. But if this was the only critical parameter, then all math professors would be the best in this field. You should be able to combine math and basic knowledge of finance. At least, you should understand what (and how) affects the price most - US unemployment rate or the earthquake in Japan. Besides, you should possess the quality all authors are writing about. You know, something like "Today Joe has lost the amount of money exceeding the cost of their house while doing his trading, but his wife did not even suspect anything..."

I work with CAD systems and I often have to do programming for different platforms - solve non-standard issues, develop algorithms for subordinate employees, etc. When I do not have enough time to do programming due to various "paper" work, MQL5 prevents my brain from "drying up".

Is it necessary to have some trading experience or do your programming skills and knowledge of math seem enough for you?

Experience is necessary. You cannot learn driving only by studying cars in books. You need to do some real trading to know that a deal execution may take more than a minute and spread may increase by 2-3 times.

Your Expert Advisor trades rarely but uses the maximum volume. Three weeks have left before the competition's end and your trading robot is staying in TOP-10. What is the role of luck here?

Well, the volume is not maximum, unfortunately. It comprises only 5 lots. Rare deals are the result of incorrect closing. I don't understand why I have not detected this error during the tests. Now, the Expert Advisor with corrected closing shows the result, which is better by 30% than the competition's one. Luck is necessary during the Championship, of course, since all participants take risks. We cannot say about any money management here. My Expert Advisor is no exception. Besides, it is showing some bad trend at the moment - first, it performed 4 profitable deals and 1 loss-making deal, then the ratio changed to 3 to 1 and now it is 2 to 1...

I have an ambiguous attitude towards TOP-10 Expert Advisors: on the one hand, these ten trading robots are the best out of 450 ones, on the other hand, the Expert Advisor, that made 60K for the first month, makes only 10K during the second month. This is a significant setback. It is much better when an Expert Advisor trades smoothly throughout the entire Championship, like pulfik, for example, or rusland1962.

Frankly, it's hard to grasp the idea of your strategy. Can that be explained by the error?

Strategies may be based on technical analysis, news, statistics, etc. Originally, I was going to submit the Expert Advisor, which performs frequent trades making almost $800 out of $200 per week during the tests. But I've changed my decision after reading the Rules (I read them carefully when there was only one week left before the registration end) to avoid disqualification.

The implemented strategy is based on statistics of previous periods. The implementation of the strategy has become possible thanks to MetaTrader 5 platform. Optimization with the use of the clouds accelerates development of an Expert Advisor significantly. The open time is the optimization result. It turned out that the chance to make profit was the highest if the market entry in the direction of the price was performed at 10:36. It also coincides with the working hours of exchanges. Besides, the influence of scalpers is lower at that time (unlike night time). The second time for entering the market is more risky. It was added only to increase the chance of approaching the achievements of the previous Championships during the current competition.

Unlike previous Championships, this one has no clearly visible global trend. What kind of market is your Expert Advisor best suited for?

My trading robot is a trend one, of course. It has nothing to do during flat movements, especially considering that positions are closed at the wrong time due to the code error.

You've said that you use only 5 lots for trading. But you have one short position having the volume of 5 lots, as well as 2 Sell Limit pending orders having 5 lots each at the moment. Is it an error or an averaging method?

These pending orders will be removed.

If these orders are executed, you will have a position of 15 lots. Right?

Yes, but the pending orders will most probably have no time for that. However, this is possible theoretically.

Do they have some expiration time? Why do they have the same price? Can it be the result of the program error?

The same price is a normal thing. The orders expire at the end of the day. But actually, they are removed earlier.

Of course, it would be nice to test the Expert Advisor for about a week on some demo account before the Championship. But it is what it is. I hope that admitting one's own errors is not a reason for disqualification, as the Rules say nothing about that...

As it turns out, many Participants have not checked their Expert Advisors on a specially allocated account detecting errors only after the start of the Championship. Have you found the error?

Yes. I think, many Participants will support me in this - it is necessary to implement at least one test week before the start of the Championship plus 2-3 more days to insert necessary corrections. I think, we will have much more profitable Expert Advisors after that making the entire contest much more exciting.

Now, only 25 trading robots have doubled their deposits. But I don't think that the rest 425 ones were not able to make more than 10К within 9 weeks during the tests. For example, I don't have time to leave my computer online for the entire week, as there may be some problems with Internet connection or children may break something, etc.

Do you use fixed SL and TP values received as a result of optimization?

This Expert Advisor has two rigid levels. I haven't even checked if the second one has been activated at least once. Take Profit level depends on the previous movement - if it was strong enough, the level will be closer to the open price.

The Rules contain the limitation of 5 lots.

But you could also set less than five lots, as well as you can use two or three orders to open position exceeding 5 lots.

Perhaps, it would be possible to be less risky if the winning condition was, for example, the least drawdown or the maximum series of profitable deals. The implemented function for defining a lot size calculates the maximum possible lot and, if it exceeds 5, then it sets 5. As the risk factor is set to maximum, deals start from 5 lots right away. It was possible to set 2-3 orders but I thought that the Expert Advisor could make $60 000 in 3 months anyway. Such a profit is quite sufficient to remain in TOP-10. I don't have too great expectations, as it is my first Championship.

So, you have selected the Expert Advisor and the strategy most fitting to the Championship conditions. What were the development criteria?

$60 000 were enough to finish the Championship in TOP-10 during the previous competitions (the tenth Participant had $62 000 on his account in 2008). Therefore, it is not much of an interest to submit an Expert Advisor having less potential profitability. I used this value as the lowest one when testing my trading robot. Of course, it would be better to set the highest possible goal (Liliput made 220K on December 17, 2008). Perhaps, I will do that on the next Championship.

Let's try to guess the possible final result of this year's winner. Any ideas?

If we analyze the previous results, we can see that an Expert Advisor leading the pack the major part of the competition with a significant gap wins in most cases. The main thing for the current leader is to make fewer mistakes. The second place is far less predictable according to the past experience. The Expert Advisors are located not far from each other. The Participants currently occupying positions 2-4 will fight for the second and third places. However, predictions are a thankless occupation, and my chances to predict something correctly are even fewer than that of a weather presenter. :)

Well, your Expert Advisor is the least active among the first five ones. It means that it has fewer chances to make some mistakes during the last three weeks. We wish you good luck in the Championship!

Thank you! I also wish good luck to all the Championship Participants. I want to express my thanks to the Organizers for such an exciting competition, as well as to MQL5 developers for their work.

The Championship is coming to an end leaving us with vivid impressions of many unusual trading strategies. However, the trading robot of Sergey Pankratyev (s75) is showing really peculiar things - it is trading all 12 currency pairs opening only long positions. It is not an error but just a response to some certain market conditions.