Weekly price is breaking 1.3280 resistance level to above for the reversal of the price movement from the bearish to the ranging bullish market condition to be located inside Ichimoku cloud. Ascending triangle pattern was formed by the price to be crossed to above, Absolute Strength indicator and Trend Strength indicator are estimating the bullish condition in the near future, and Chinkou Span line of Ichimoku is indicating the good breakout of the price movement with the possible bullish reversal. 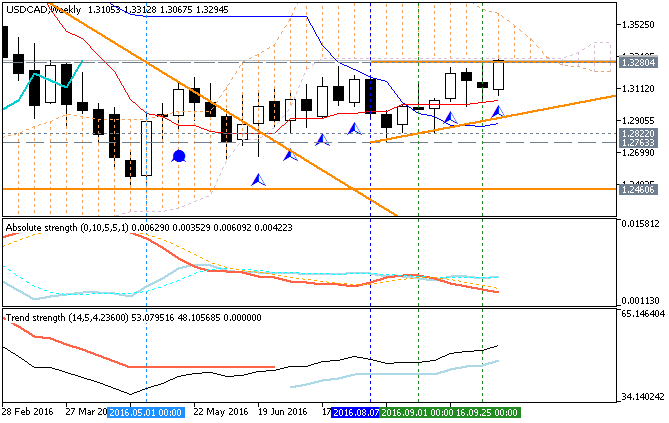 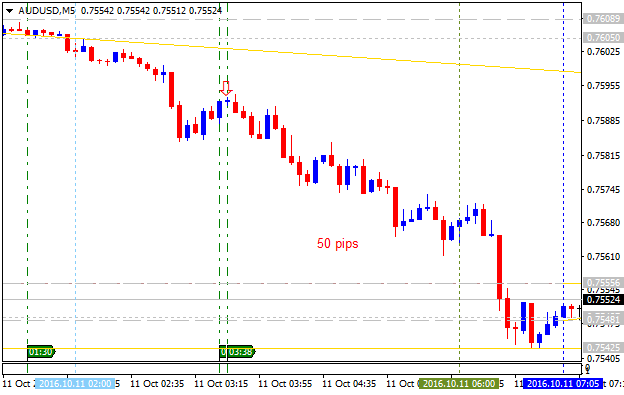 So why all this talk about the CNY weakness? (adapted from the article)

"In short, the Yuan weakness gives China a comparative and possibly absolute manufacturing and export advantage that could encourage the aggressive fiscal policy stimulus that would naturally align with the “yield curve control’ announced on September 21."

"On Monday, the Chinese Renminbi (off-short Yuan) fell by its largest amount in four months after China opened following National Day Golden Week holiday. The drop amounted to 0.46% for the Yuan but continues to validate the trend of a stronger USD and weaker CNH. The weakening took the Yuan to its lowest level (6.7501) since September 2010 according to Bloomberg data." 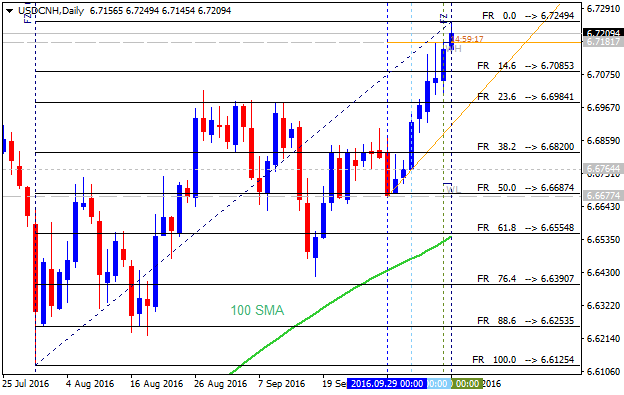 "The weakening aligns with China FX reserves shows a rising amount of capital is leaving. The increase in capital flows could bring volatility to global markets as the world awaits the next move by the Federal Reserve that could bring down the Yuan and is encouraging wealthy citizens of China to move their money overseas in yuan amid Yuan depreciation expectations.
So why all this talk about the CNY weakness? In short, the Yuan weakness gives China a comparative and possibly absolute manufacturing and export advantage that could encourage the aggressive fiscal policy stimulus that would naturally align with the “yield curve control’ announced on September 21."

USD/JPY Technical Analysis: The Race To Debase Resumes In Asia (based on the article) 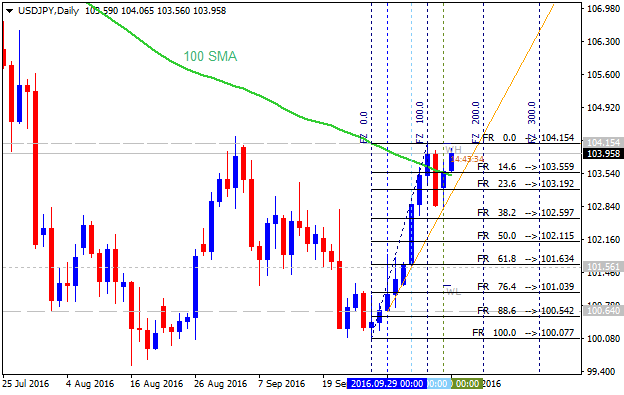 "Clearly the stock market loves the Fed, but bloated stock values are not real productive wealth which is created by real investment in plant, equipment, research and infrastructure, weak in this recovery. Even housing with low mortgage rates has not performed up to expectation based on demographics. It has not occurred to the Fed that what meager growth we have had has occurred in spite of government policy, not because of it. The private sector continues to perform poorly in light of the barriers that governments at all levels throw up in its path." 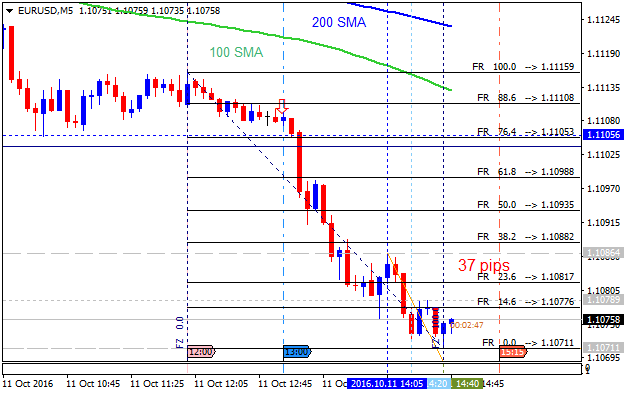 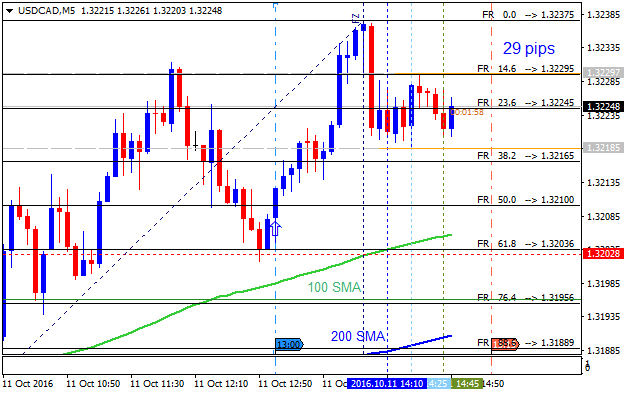 [USD - FOMC Member Dudley Speaks] = Speech at the Fireside Chat with the Business Council of New York, in Albany.

New York Fed President Dudley (FOMC voter) speaks: "Dudley speaks on the economy. Based on his recent speeches, we think he is now of the view that, from a risk-management perspective, accommodation should be removed cautiously given the lack of scope to lower rates in the event of an economic downturn." 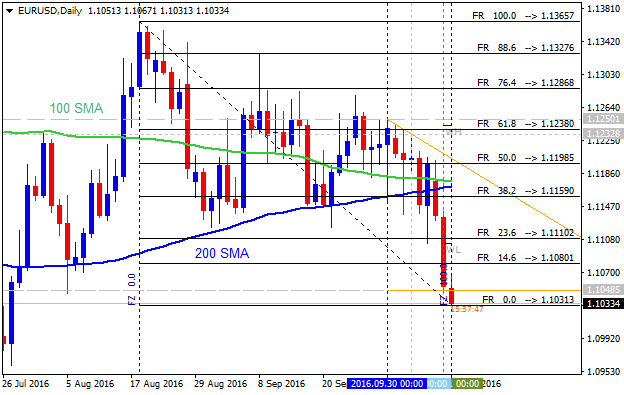 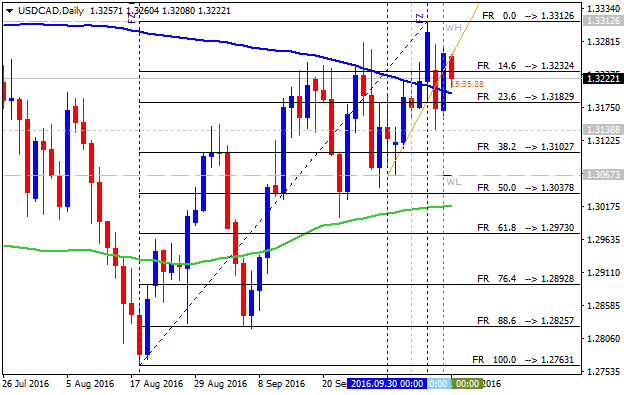 Kansas City Fed President George (FOMC voter) speaks: "George speaks on the economic outlook. She has dissented several times this year. We expect her to maintain her call for a rate hike." 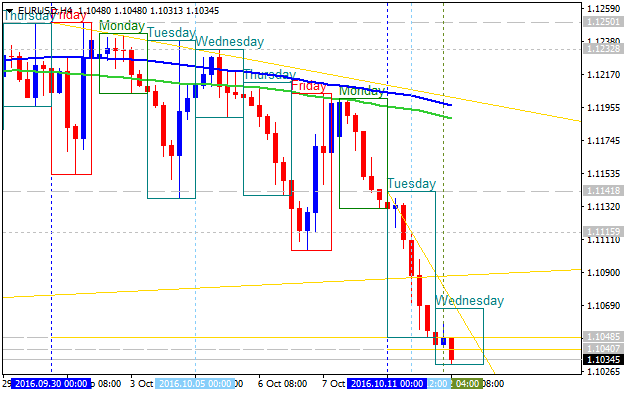 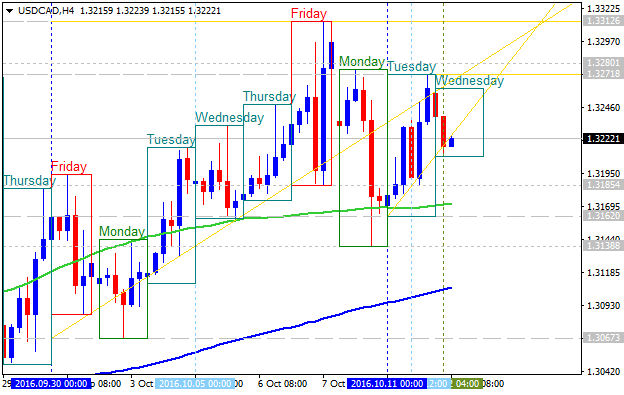 FOMC minutes: "Given the three dissents in favor of a rate hike at the FOMC’s September meeting, we expect the minutes to reveal widening divisions within the committee over the appropriate stance of policy. On one side are those who believe a rate hike in September would have been warranted given that the economy is operating near mandate-consistent levels and mediumterm risks are rising. These concerns were expressed by regional Fed presidents Rosengren, Mester, and George in remarks leading up to, and following, the meeting. On the other side are those FOMC members, primarily within the Board, who point to a slower removal of labor market slack, via trends in participation and other variables, and a lack of evidence that inflation or financial instability are rising, as supporting a further delay in policy normalization." 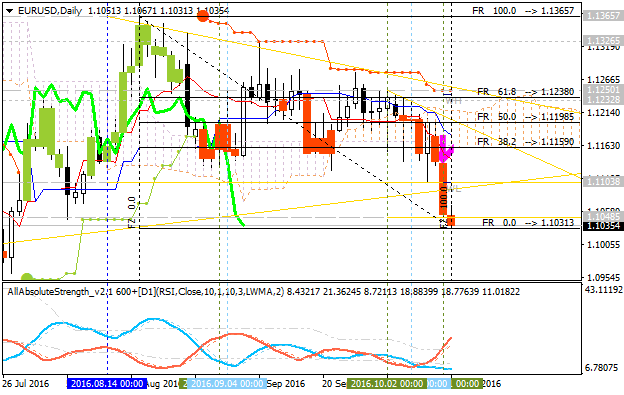 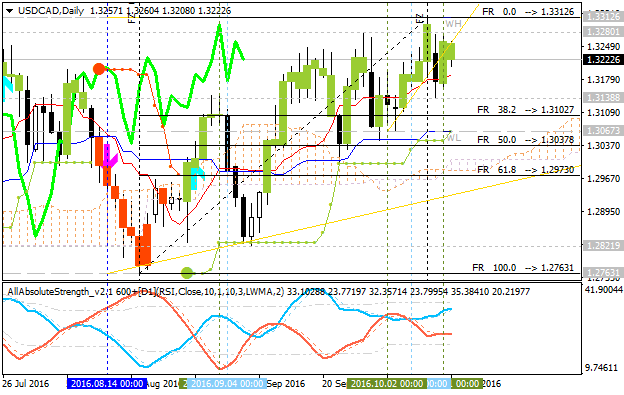 EUR/USD Rebounds From Weekly Lows (based on the article) 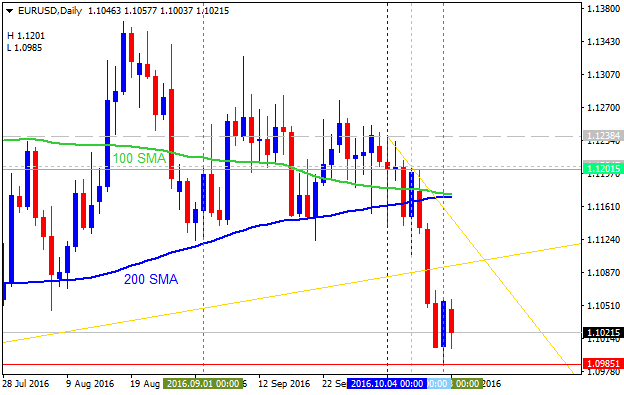 Daily price was on the breakdown with the bearish reversal: the price was bounced from one week low at 1.0985 to above for the ranging bearish condition to be started:

"The EUR/USD is beginning to pair losses after closing lower for 3 consecutive sessions and declining as much as 219 pips for the week. The current daily low for the EUR/SUD resides at 1.0985, but technical traders will continue to monitor the psychological 1.1000 level going into tomorrow’s University of Michigan’s Confidence figures and Janet Yellen’s speech at the Boston Fed conference. Both of these events are marked as high importance events, with both having the ability to shift the direction of the EUR/USD."

USD/CNH: End Of Week Technicals - Bullish Continuation Or Correction To Be Started

D1 price is located to be above Ichimoku cloud for the primary bullish market condition with the ranging within the following s/r levels: 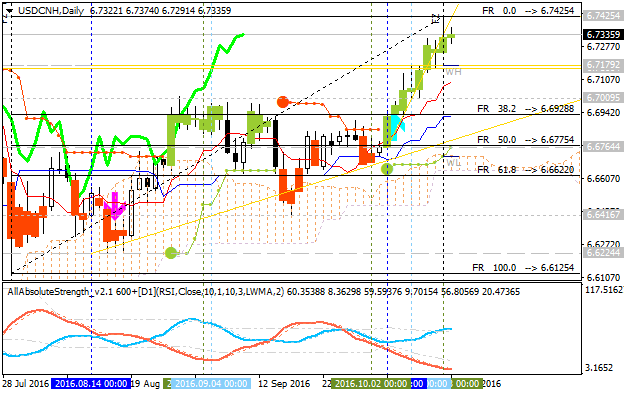 H4 price is on bullish trend with 6.7425 resistance level to be broken for the primary bullish condition to be continuing: 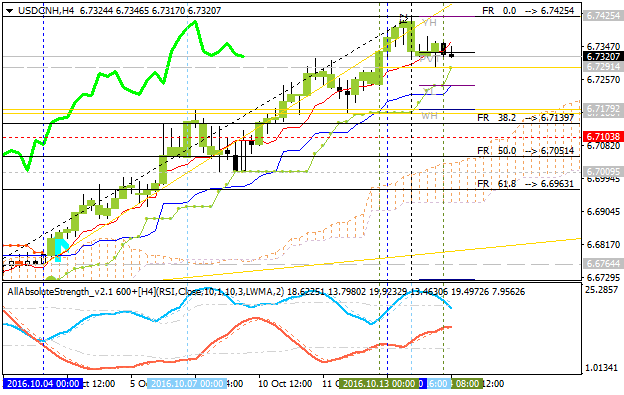