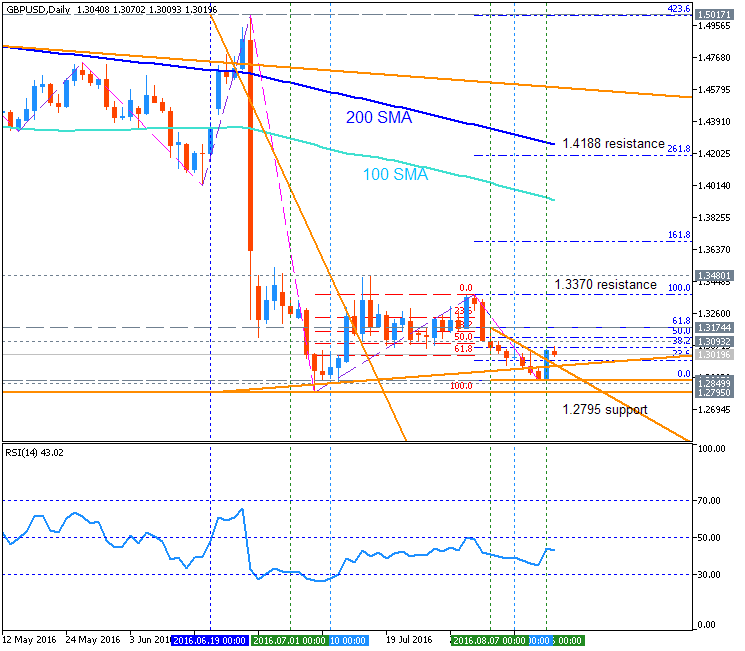 Daily price is located below 100 SMA/200 SMA in the bearish area of the chart. The price is on ranging within the narrow support/resistance levels waiting for the direction of the bearish trend to be continuing or the seconary bear market rally to be starte.

AUD/USD Ahead of Employment Data - intra-day bearish; daily breakdown with correction (adapted from the article)

"The AUD/USD continues to decline from yesterday’s high at .7749. This move in price has been guided by a descending trendline, which is drawn below by connecting a series of swing highs over the last two trading sessions. Aussie traders should continue to monitor this line ahead of today’s employment data as an ongoing point of resistance. Expectations for AUD Employment Change (July) figures are set at 10k, and any deviation from this value may result in a significant shift in the short term pricing of the AUD/USD." 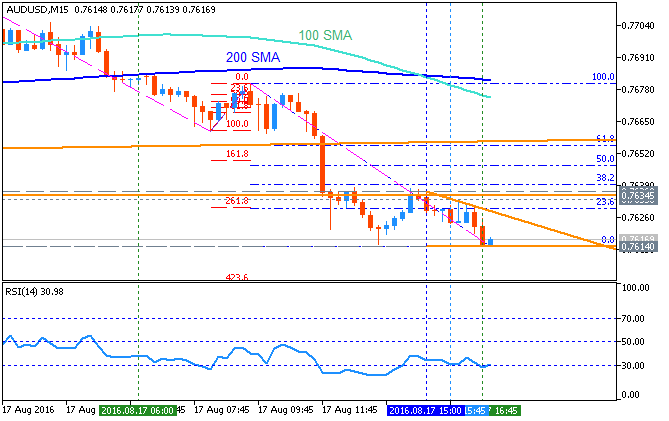 D1 price located above Ichimoku cloud in the bullish area of the chart. The price is started with the secondary correction on open daily bar for now with Chinkou Span line of Ichimoku indicator which is crossing the price to below for the good possible breakdown.

"The AUD/USD can currently be seen trading to new daily lows at .7615. The Grid Sight Index (GSI) is currently highlighting a short term downtrend, with the pair printing a series of lower lows in early trading. After reviewing 23,227,069 pricing points, GSI has indicated that price action has continued to decline 21 pips or more in 46% of the 13 matching historical events. Today’s primary bearish distribution is found at .7596. A move through this point would place the AUD/USD at both new weekly and daily lows." 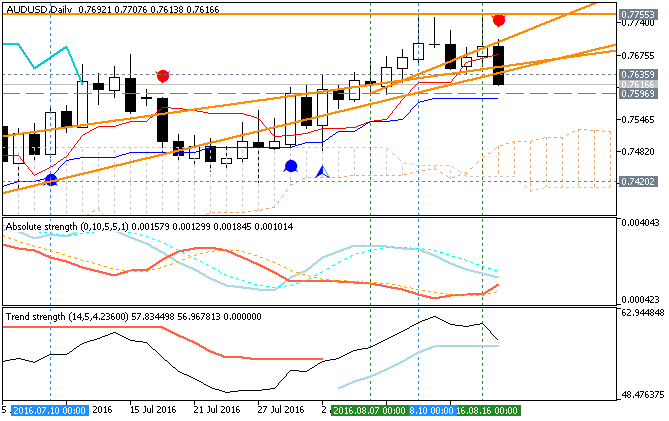 SUMMARY : daily correction within the bullish

Fed minutes: Some FOMC voters thought a rate hike may be needed soon (based on CNBC article) 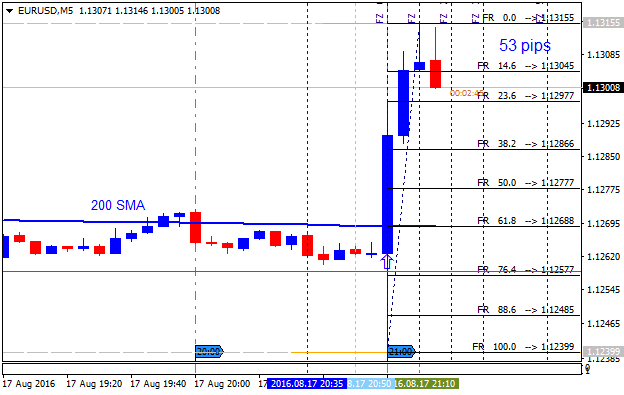 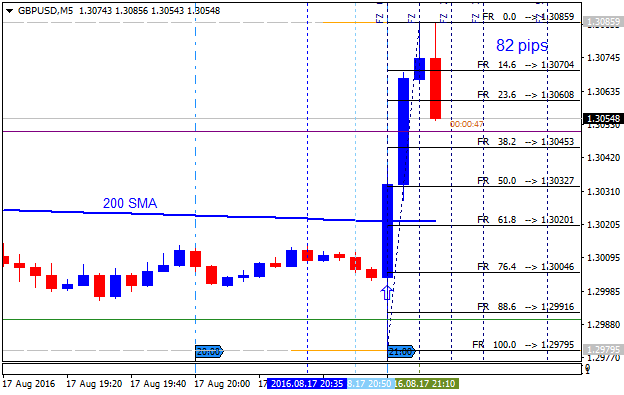 [USD - Philly Fed Manufacturing Index] = Level of a diffusion index based on surveyed manufacturers in Philadelphia. 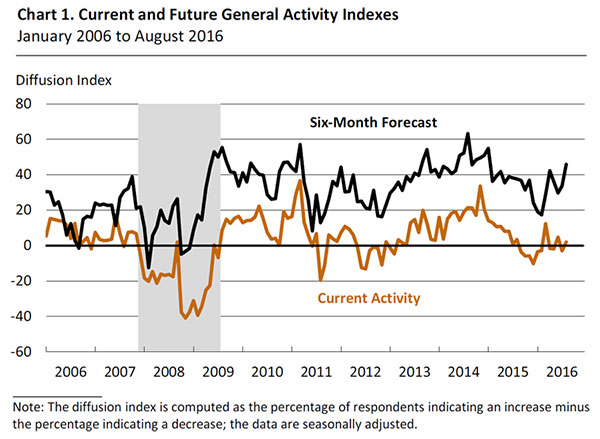 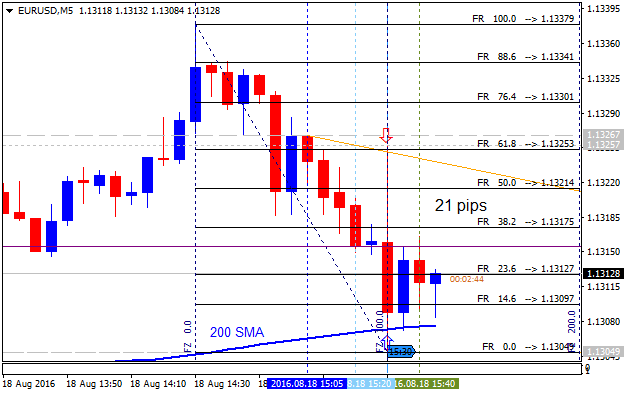 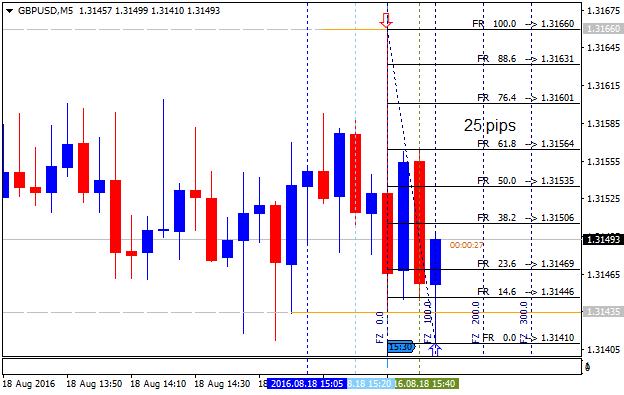 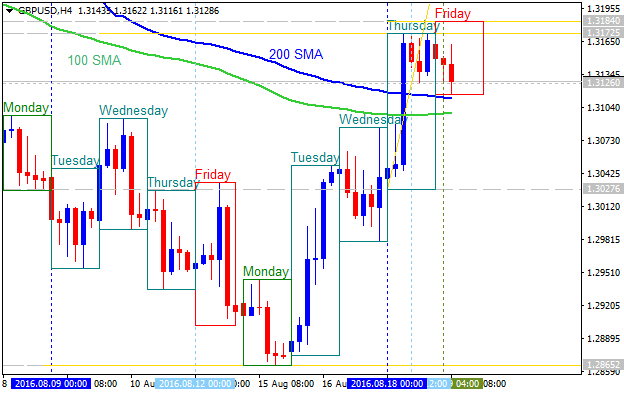 Daily price. United Overseas Bank is expecting for GBP/USD to keep the bearish trend with 1.3270 level to be unlikely to be broke to above:

"While we anticipated a corrective rebound to 1.3170 (see update on Wednesday), the pace of the up-move was unexpected. The high has been 1.3186 so far and with no signs of weakness just yet, the current GBP strength appears to have room to extend further to 1.3270 even though the odds for such a move are clearly lower (an unlikely clear break above 1.3270 would indicate that GBP has entered a bullish phase). All said, this pair is expected to stay underpinned in the next few days unless there is a move back below 1.3020." 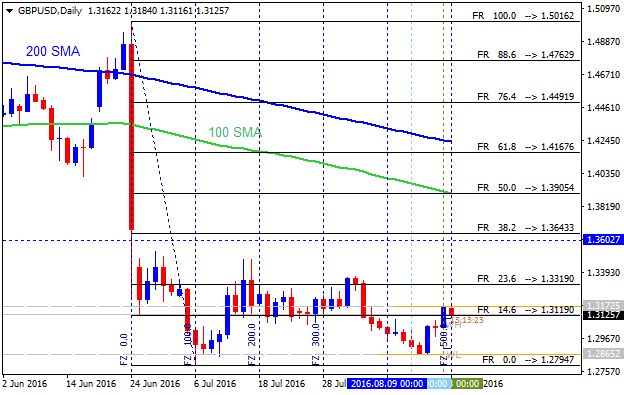 H4 price is located above 100 SMA/200 SMA for the bullish market condition: the price was bounced from 1.1365 resistance level for the ranging to be started within the following support/resistance levels:

The bearish reversal level is 1.1130 support, and if the price breaks this level to below on close H4 bar so the reversal of the intra-day price movement from the bullish to the primary bearish market condition will be started. 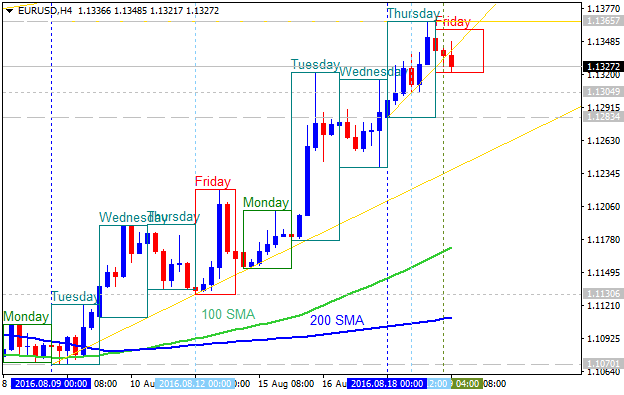 Daily price. United Overseas Bank is expecting for EUR/USD to be continuing with the bullish trend up to 1.1430/35 level as the target:

"The immediate bullish target that was indicated on Wednesday was quickly met as EUR surged to an overnight high of 1.1365. While the outlook is still clearly bullish and the next level to focus on is at 1.1430/35 (high on the day of Brexit), the pace of the current rally appears to be unsustainable and those who are long should look to take some profit on any approach to 1.1430/35." 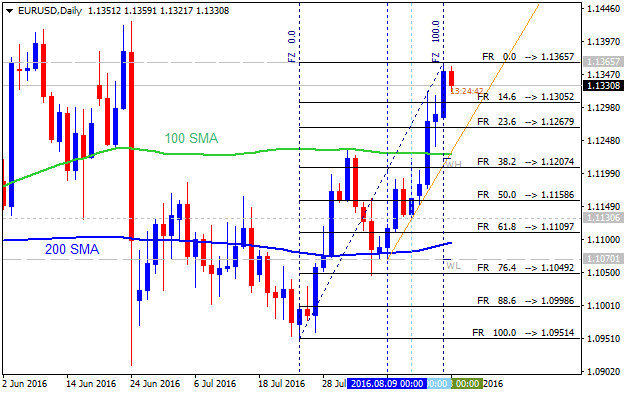 Dollar Index - "While the market is only pricing in a 50-50 chance that the Fed will hike rates this year; the contrast to the desperate and persistent stimulus programs form the ECB, BoJ and BoE raise the US currency’s profile. This past week in fact, we saw a remarkable series of volatile days for the US Dollar founded on changing tides in speculation for Fed timing based on the rhetoric of FOMC members and a few key pieces of data. It is worth noting, however, that the currency’s reaction didn’t hang on every word spoken by the central bankers. Many times volatility would follow the course of skepticism after a member (Dudley, Williams, Bullard) attempted to crack the market’s skepticism of hikes in 2016." 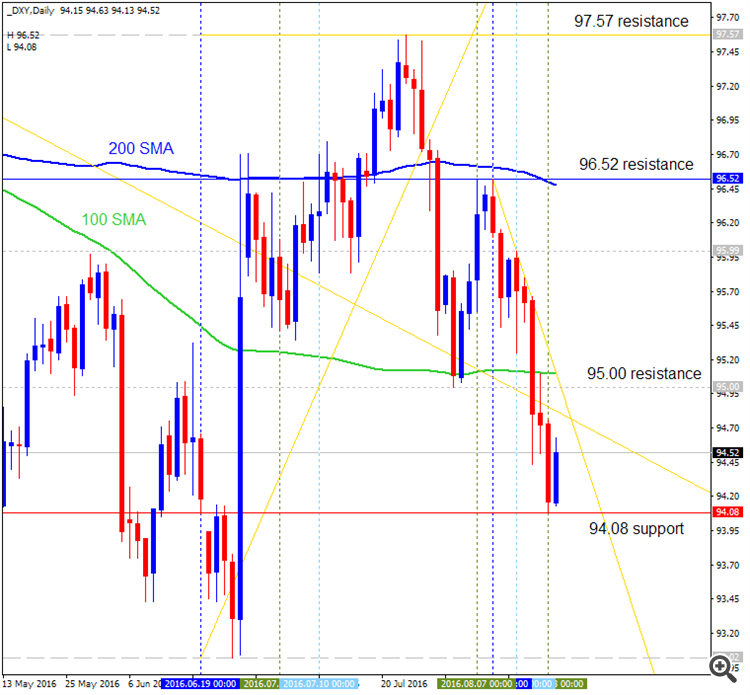 EUR/USD - "The prospects for European interest rates are even worse than that of the US, however; at some point the Euro will need to trade on its own merits. Recent ECB rhetoric suggests the bank is in a "wait and see" mode as it does not want to ease monetary policy further until it sees further signs of persistently low inflation and growth. Its main refinancing rate already stands at 0.00% while its deposit facility rate is strongly negative at -0.40%. Further policy easing seems likely as Overnight Index Swaps predict 20 percent odds of a further rate cut in September. ECB officials have nonetheless expressed discomfort from cutting rates further into negative territory; at a certain point interest rate expectations may have little marginal effect on the EUR." 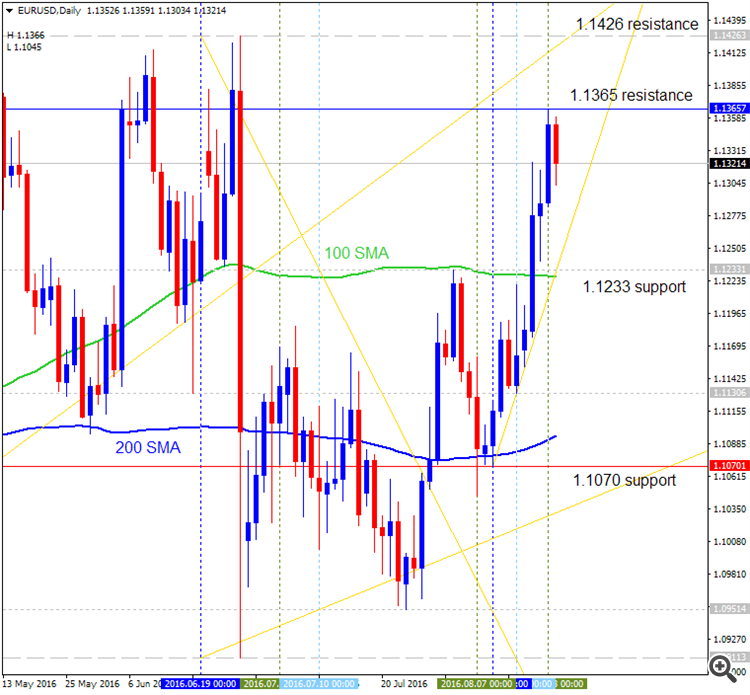 USD/JPY - "So, details continue to line-up for this upcoming September Bank of Japan meeting to be very, very interesting. The big question is when markets might actually begin to try to anticipate this weakening in the Yen, as the currency is continuing to trade near longer-term resistance levels against many major currencies, including the psychological ¥100.00-spot against the U.S. Dollar." 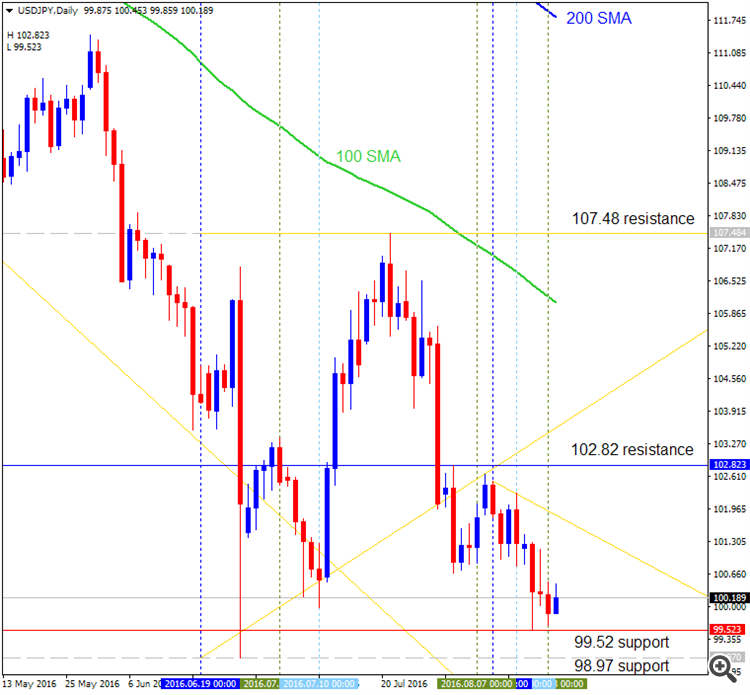 AUD/USD - "A mostly quiet economic data docket in the week ahead will keep the spotlight on this narrative as all eyes turn to a speech from Fed Chair Yellen at the annual Jackson Hole symposium. The gathering has emerged as a venue for key announcements of Fed policy intentions in recent years. If Williams’ retreat last week is representative of Fed leadership’s efforts to corral disparate FOMC members and present a unified hawkish posture, this will be the opportunity for Yellen to drive that message home. The Australian Dollar is likely to find itself on the defensive if this proves to be the case, suffering at the hands of an adverse shift in yield spreads as well as the likely onset of risk aversion." 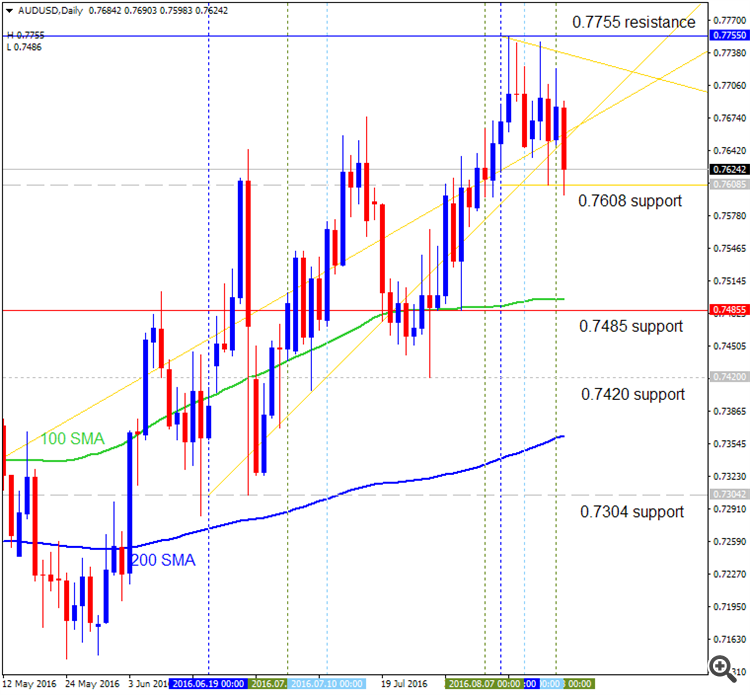 USD/CAD - "As encouraging as the August Bull Market in Oil has been, the non-Oil sector has been very weak and the current price of Oil at less than $50/bbl is still providing negative margins for many E&P firms in Canada. Unfortunately, if we begin to hear from the Bank of Canada about potential easing, we could quickly see the gains of the Canadian Dollar dissipate in a hurry." 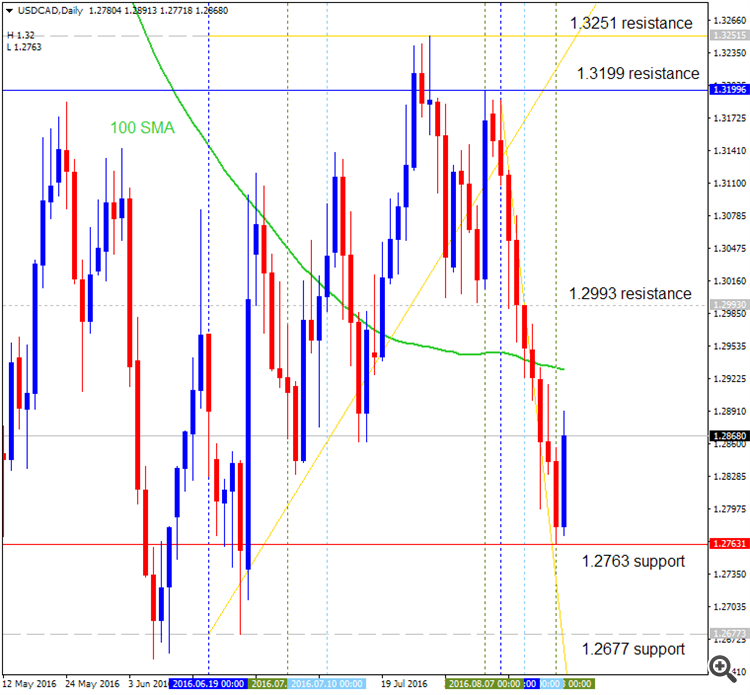 USD/CNH - "In the coming week, this wrestling may continue as a primary theme amid a light Chinese calendar. Major event risk will likely come from trading counterparts, including measures for US labor and housing markets for the month of July. Fed Chair Yellen’s speech may bring some volatility to FX markets but is less likely to change the fact that FOMC members are holding divergent views towards imminent rate hikes. The odds of a hike in September is at 24% and 28.9% in November, so relatively low. As our Currency Analyst James Stanley discussed, the marginal utility of rate hike fears is diminishing. Without a high probability of a Fed rate hike, the Dollar/Yuan is less likely to break the pivotal 6.7000-psychological level." 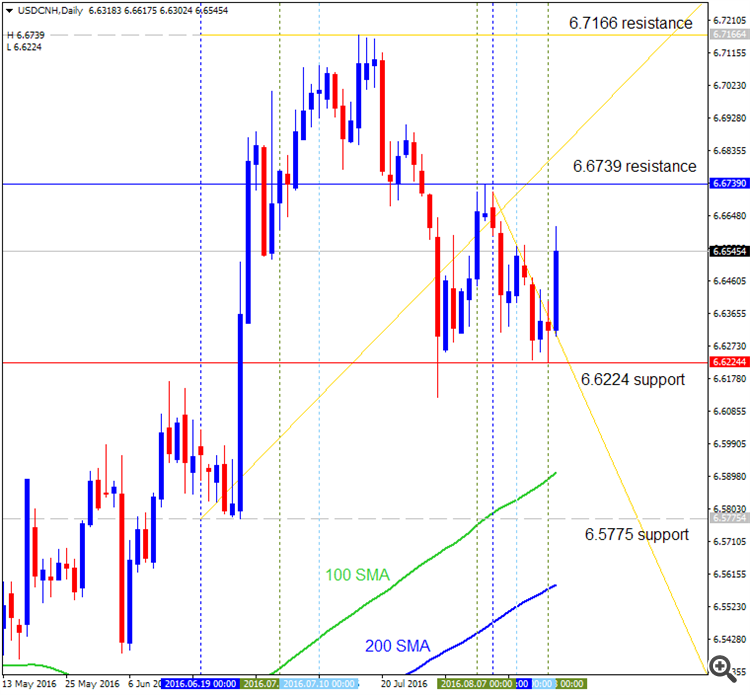 GOLD (XAU/USD) - "Interestingly enough, this week’s range was even smaller at just 1.76% - (smallest weekly range since 12/25/2015). The last time range was this contracted was just one week before the 2016 open which marked strongest quarterly rally since 3Q of 1986. That’s all to say that gold prices are primed for volatility in the coming weeks. We’ll maintain a neutral bias for now as we continue to hold the monthly opening range. Levels remain unchanged." 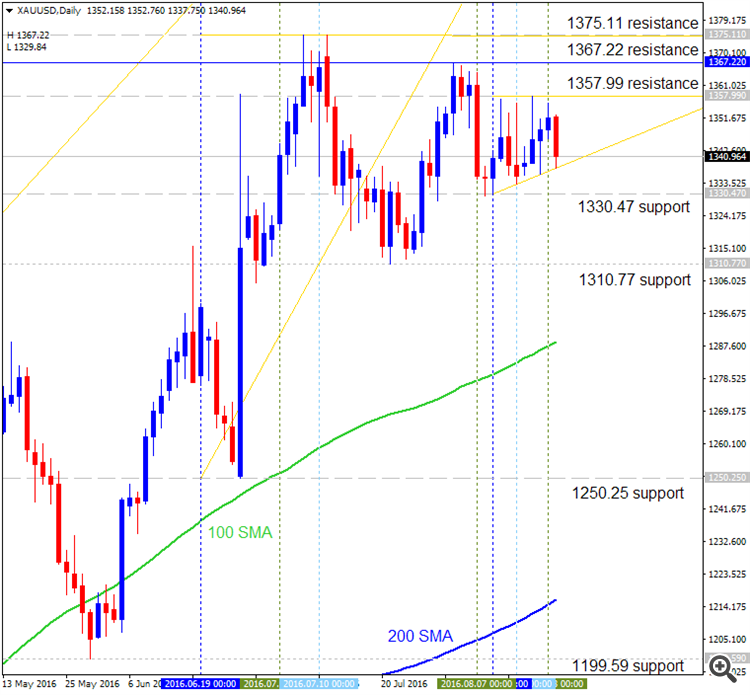 EURUSD Technical Analysis 2016, 21.08 - 28.08: Fibo resistance with ascending triangle to be broken for the daily bullish to be resumed 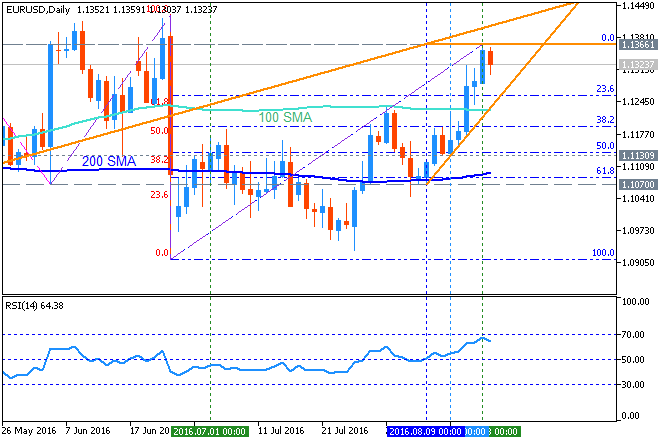 If D1 price breaks Fibo resistance level at 1.3375 to above on close bar so the local uptrend as the bear market rally will be started.
If D1 price breaks Fibo support level at 1.2876 from above to below so the the primary bearish trend will be resumed with 1.2795 level as a nearest daily bearish target to re-enter.
If not so the price will be bearish ranging within the levels. 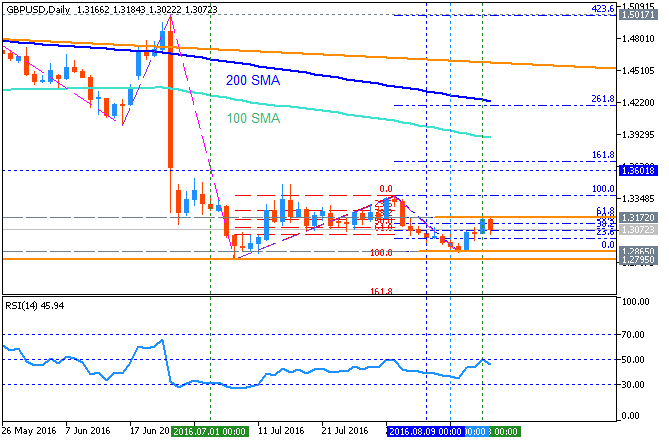 EURUSD Technical Analysis 2016, 21.08 - 28.08: Fibo resistance with ascending triangle to be broken for the daily bullish to be resumed

H4 price is located to be above Ichimoku cloud in the bullish area of the chart: the price was started with the local downtrend as the secondary correction within the primary bullish market condition by 1.1270 support level to be breaking for the correction to be continuing.

If H4 price breaks 1.1270 support level on close bar together with descending triangle pattern to below so the local downtrend as the secondary correction within the bullish market condition will be continuing.
If H4 price breaks 1.1366 resistance level on close bar from below to above so the bullish trend will be resumed.
If not so the price will be on bullish ranging within the levels. 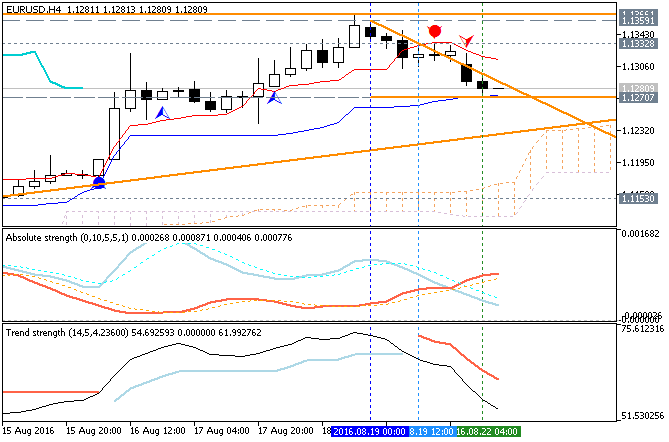