The MetaTrader 5 terminal contains an integrated development environment for the development of fully automated strategies (trading robots), which can perform trading without any human intervention. Another name for these trading robots is Expert Advisors. Expert Advisors and technical indicators for the MetaTrader 5 terminal are written using the MQL5 language, which encompasses all of the advantages of the modern programming languages.

The ability to debug programs in MQL5 allows you to create a code with the maximum security level possible, but though necessary, this is not the only condition required for the development of a profitable trading system. Trading systems, which are able to demonstrate positive results throughout a large interval of historical data, are called robust, which is derived from the English word "robust", meaning tolerant to faults and errors.

Prior to entrusting your capital to an Expert Advisor, you must make sure that its rules for opening and closing positions, as well as rules of money managing, allow for profit expectation. The simplest way to test this is to simulate the work of the Advisor using an available historical data.

The MetaTrader 5 client terminal has a special integrated component, a strategy tester for obtaining results of the Advisor's work with historical data. The process of a onetime run of the Expert Advisor on an interval of dates is called the testing of the Expert Advisor. This onetime test provides us with a large amount of useful information, necessary for drawing conclusions about the robustness of the Expert Advisor.

But to be able to trust these results, the process of testing must model the actual current environment, in which the Expert Advisor is run, as closely as possible. The MetaTrader 5 tester uses a tick by tick modeling of prices, using the historical values of spreads for each instrument, on which a trading operation takes place.

A little history about the strategy tester

The first strategy tester initially appeared in the MetaTrader 3 terminal. This was a relatively simple tester by modern standards; it performed testing based on three models of prices development at the bar:

Price modeling has always been based on the bars of the tested time frame, information from lower time frames were not used. The tester from the MetaTrader 3 terminal had many shortcomings, including slow testing speed, low accuracy, and the lack of Expert Advisor optimization by input parameters.

The MetaTrader 4 terminal replaced the third terminal and included a new compiled language MQL4 (Previous MQL-II was interpreted), as well as took an absolutely new approach to testing. Now testing could be carried out in three modes:

An important difference from the tester of the third terminal was that the testing strategy of the MetaTrader 4 terminal used the price data of the youngest available time frame for trading simulation. Therefore, with the presence of the minute history, throughout the tested interval, the test results are maximally close to the results obtained online. In the absence of the underlying time frames, simulation of price development within the bar is generated in the same way as in the tester terminal of MetaTrader 3.

In addition, we gained an opportunity to perform optimization by direct enumeration of input parameters, as well as using a genetic algorithm. This gave us an opportunity to significantly accelerate the process of optimization, especially for strategies with a large number of input parameters. It is now possible to conduct the actual testing in the visual regime. This was a huge step, which was appreciated by traders.

The new MetaTrader terminal of the 5-th generation is based on the experience gained from the design of the previous terminals, and this applies to the strategy tester. Now there is an opportunity to conduct testing of multi-currency strategies, i.e. strategies which are simultaneously traded on multiple instruments.

Strategy optimization can now be conducted not only on all available processor cores, but also on remote agents, located on other computers in the LAN and the global Internet network. This allows you to build up the powers of the tester and perform cloud calculations, which were previously inaccessible, directly in the language of MQL5.

But for a basic understanding of the testing process in the MetaTrader 5 terminal, it is critical to be able to understand how the modeling of prices in a strategy tester takes place.

Strategy Tester of the MetaTrader 5 terminal uses only one mode of price modeling in testing - the generation of ticks on the basis of existing historical data on minute time frames of the used symbols. The remaining modes of simulations in MetaTrader 4 were removed because despite their high speed, they failed to provide a high accuracy of testing.

Using an M1 time frame in the tester, allows for a very accurate simulation of the price movement, with a minimum number of errors, in contrast to the simulation of ticks based on senior time frames. As a result, the errors in the modeling of prices in the MetaTrader 5 strategy tester are trivial, and the differences between the simulated price and the price that took place in reality, can only be within the scale of a minute bar.

The bars of all the required time frames are formed in the historical data base of the tester in the usual way (just like in the client terminal) with the receiving of the generated ticks. The minute bar tick volume 1 is not subjected to any generation - it can be written with a value of Close.

A bar with 2 ticks also isn't generated - first its tick value is recorded as Open, then a tick with a value of Close is recorded.

A bar with 3 ticks is generated according to a scheme, for three-tick bars there are only 4 pattern of bar development:

Supporting points are distributed between the opening shadow, the scale of the candle, and the closing candle shadow.

Depending on the number of ticks the distribution of support points is as follows (opening shadow - the scope of the candle - closing the shadow):


If the candle does not have one of the shadows, then the support points of these shadows are given to the magnitude of the candles.

For a bear (black) candle generation of support points on the 3-5-3 pattern is similar: 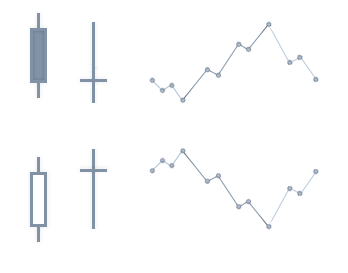 If the shadow is generated by two support points, then the control points are arranged in the following way:

The closing shadow is generated in a similar way.

Formation of a ground of support points from Low to High

The scope of the candle is generated by impulse waves, the number of waves is calculated as:

Each impulse wave has a length step in points, which is calculated by the formula:

After the impulse step points should be rolled back by 1 point. Further in the cycle the positions of support points are calculated (for a bull candle):

All of the above is demonstrated for clarity on the picture:

Calculating the support points for bear candles is done in the same manner:

The generation of ticks is carried out based on support points


Intermediate ticks between support points are generated according to the following rules:

In conclusion, let us compare the tick history, recorded from the MetaQuotes-Demo server on May 13, 2010 from 13:00 to 13:30, with the tick sequence generated by the tester in the MetaTrader 5 client terminal. An Expert Advisor was used to record ticks into the agent log:

The history of ticks was collected online, using the indicator described in the article Creating tick indicators.

You can point the mouse to any point on the graph and read information on each tick in the pop-up windows:

The graph clearly shows that the quality of simulation ticks in the tester MetaTrader 5 client terminal allows for adequate testing of Expert Advisors on historical data.

Warning: All rights to these materials are reserved by MetaQuotes Ltd. Copying or reprinting of these materials in whole or in part is prohibited.
Last comments | Go to discussion (17)

Lucas Martinoia | 10 Oct 2016 at 17:17
Hi, I've executed several tests using Strategy Tester and I found a problem with ticks generated automatically by Strategy Tester, it's impossible to reply true tick movements (please see attached document) and this situation obsviously impact in your test results, so I'm currently using my own tick history data (from TrueFx.com) in Meta Trader according the following guidelines https://eareview.net/tick-data/convert-tick-data .

Mladen Rakic | 5 Dec 2016 at 22:57
Lucas Martinoia:
Hi, I've executed several tests using Strategy Tester and I found a problem with ticks generated automatically by Strategy Tester, it's impossible to reply true tick movements (please see attached document) and this situation obsviously impact in your test results, so I'm currently using my own tick history data (from TrueFx.com) in Meta Trader according the following guidelines https://eareview.net/tick-data/convert-tick-data .
Aren't you comparing the wrong things (the thread is about metatrader 5 you are posting links to how to do that using metatrader 4)?


I think this article is helpful to you. https://www.mql5.com/en/articles/75

Btw, the algorithm of ticks ' generation in MT4 is really confused especially the modes of control points.

Im wondering if anyone had further thoughts on UGO58’s question of a few years ago?

I have an ea with good results on all tick mode but fails demo.

Is it possible to apply the tick generator algo real time or does tester collect whole 1 minute bar history before applying the algo.


Im wondering if anyone had further thoughts on UGO58’s question of a few years ago?

I have an ea with good results on all tick mode but fails demo.

Is it possible to apply the tick generator algo real time or does tester collect whole 1 minute bar history before applying the algo.

Funny. It's like "I had a dream is it possible to apply it in reality ?"...lol

OOP in MQL5 by Example: Processing Warning and Error Codes

The article describes an example of creating a class for working with the trade server return codes and all the errors that occur during the MQL-program run. Read the article, and you will learn how to work with classes and objects in MQL5. At the same time, this is a convenient tool for handling errors; and you can further change this tool according to your specific needs.

MQL for "Dummies": How to Design and Construct Object Classes

By creating a sample program of visual design, we demonstrate how to design and construct classes in MQL5. The article is written for beginner programmers, who are working on MT5 applications. We propose a simple and easy grasping technology for creating classes, without the need to deeply immerse into the theory of object-oriented programming.

MetaTrader 4 gained its popularity with traders from all over the world, and it seemed like nothing more could be wished for. With its high processing speed, stability, wide array of possibilities for writing indicators, Expert Advisors, and informatory-trading systems, and the ability to chose from over a hundred different brokers, - the terminal greatly distinguished itself from the rest. But time doesn’t stand still, and we find ourselves facing a choice of MetaTrade 4 or MetaTrade 5. In this article, we will describe the main differences of the 5th generation terminal from our current favor.

Connection of Expert Advisor with ICQ in MQL5

This article describes the method of information exchange between the Expert Advisor and ICQ users, several examples are presented. The provided material will be interesting for those, who wish to receive trading information remotely from a client terminal, through an ICQ client in their mobile phone or PDA.