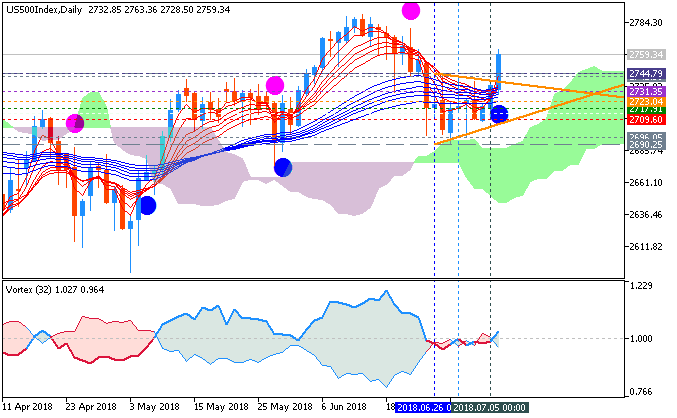 1276
psaTrading 2018.07.11 11:23 2018.07.11 13:23:44 #365
Most of the Asian stock markets ended low, with the Chinese market leading the losses. At issue was the news that the United States has produced an additional list of imported Chinese products amounting to USD 200 000 per year and threatened to impose tariffs already in September. In the Japanese market, losses were led by the sectors most sensitive to global trade issues, such as the automobile, while in China the most affected companies were the producers of raw materials.
Forex News (from InstaForex) Market View; World Stock China and Europe risk

1276
psaTrading 2018.07.12 18:17 2018.07.12 20:17:00 #366
European markets ended up higher, recovering from the losses recorded in the previous session. The media industry was among the best performers after the British government clarified the conditions for the acquisition of Sky's pay-TV platform by Twenty-First Century Fox. The oil sector ended virtually unchanged on a day when the price of oil fell again in international markets. Pharmaceuticals led the gains, with one of the German companies Gerresheimer posting an increase of more than 8% after announcing an extension of its business model and raising its growth forecasts.
Market View; World Stock Press review Market Condition Evaluation based

1276
psaTrading 2018.07.13 16:10 2018.07.13 18:10:40 #367
European indices are in consolidation, favored by the performance of the US market and the outlook for the new Earnings Season that starts today in the US, with the disclosure of the figures of three of the largest financial institutions. Meanwhile, investors continue to monitor developments in trade tensions between the US and China.
World Stock Indexes Trading Market View; World Stock Eurusd/gbpusd

1276
psaTrading 2018.07.16 10:13 2018.07.16 12:13:21 #368
In the pre-opening of the session, European indices retreated slightly, with investors focused toward company results on both sides of the Atlantic and the meeting between Donald Trump and Vladimir Putin after the US President met last week with Theresa May, British Prime Minister. Several economic studies indicate that the victory in a major football competition has a positive impact on the GDP (between 0.25% and 0.50%) of the winning country. This economic improvement has a positive effect on the stock market of the winning country, which tends to overperformance against the index of the other country finalist in the three months following the end of the competition. While recognizing that football events have a moderate and time-limited impact on stock markets, this type of study serves to confirm how much the emotions can determine the behavior of investors and economic agents. Thus, the French CAC40 index will be accompanied today in a more particular way.
Market View; World Stock Weekly forecast Forex News

1276
psaTrading 2018.07.17 19:56 2018.07.17 21:56:03 #369
European stock markets traded higher as investors digested the reported business results and monitored the words of the Fed President. In sectoral terms, the producers of raw materials stood out in the positive, while the telecommunications companies led the losses. The technology sector was conditioned by the results reported yesterday after the US closing, which disappointed the investors. In Frankfurt, shares of Thyssenkrupp rose 9.06% following news of the resignation of the company's chairman, as a result of pressure from shareholders. The European car industry has appreciated by about 0.80%. On the macroeconomic front, investor sentiment was influenced by the IMF's lowering of its growth forecasts for the United Kingdom and the Eurozone, warning that global trade tensions have worsened economic outlook.
Market View; World Stock World Stock Indexes Trading Forex News

1276
psaTrading 2018.07.18 10:29 2018.07.18 12:29:19 #370
As Powell’s testimony did not raise any fears or alarmism in stock markets, investors were able to focus on the earnings season, rewarding good results and penalizing companies that have deceased. The first group includes Johnson & Johnson, which not only reported numbers that beat analysts’ estimates but also proved confident for the future. Netflix represented the reverse of the medal. The company’s accounts disappointed the level of revenue and the number of subscribers, which led the respective stock to a decrease of 5.24%. According to Ritholtz Wealth Management, Amazon’s appreciation this year (57%) equals nearly 35% of S & P’s earnings, Netflix’s almost 100% rise is 21%, and Microsoft’s and Apple’s represent 27% of S & P’s earnings this year. The contribution of Google and Facebook is more modest (the rise of each title corresponds to 8% of the advance of the S&P). Thus, according to Ritholtz Wealth Management, FAANG accounts for almost all of the gains made by S&P this year. From this simple arithmetic emerges the crucial importance of the quarterly results of these companies.
Market View; World Stock Google Apple
1...303132333435363738394041424344...47
To add comments, please log in or register