1276
psaTrading 2018.04.09 08:53 2018.04.09 10:53:13 #291
These advances and withdrawals from the Trump Presidency in relation to world trade and its customs policy seem to fit on the theory that it is a well-organized negotiating strategy under cover of a false immediacy.
Traders joking, the beginning My Seller Account Not World Stock Indexes Trading

1276
psaTrading 2018.04.10 11:11 2018.04.10 13:11:27 #292
At the Forum for Asia, held in Boao, China, President Xi Jinping said that one of the main lines of his country’s economic policy is to open the economy abroad. To that end, Xi Jinping argued that to achieve this goal, China must significantly lower its import tariffs (especially those on automobiles), protect the intellectual property of foreign companies and improve the environment in which these companies operate in China. The Chinese President stated that his country intends to increase imports and that it does not seek a constant trade surplus with other nations. The words of the Chinese President are striking, as they meet the intentions of President Trump.
Forex News Press review Forecast for Q1'17 -

1276
psaTrading 2018.04.11 18:52 2018.04.11 20:52:29 #293
European markets closed lower, with investors turning their attention to business results. In sectoral terms, the majority ended in a downturn, with leisure-related companies leading the losses. On the contrary, the telecommunications sector was among the few to close on high. With a relative overperformance also closed the retail sector, on the day the results of the British Tesco and the French group Carrefour were known. Tesco rose 7.18%, after mentioned it will distribute an annual dividend for the first time in 4 years.
Market View; World Stock Daily Market Reviews by Eur/usd

1276
psaTrading 2018.04.12 11:26 2018.04.12 13:26:25 #294
The exchange of tweets between President Trump and some Russian officials in relation to Syria opened a new front in the stock markets. This increased tension between the two countries began with the imposition of new economic sanctions on Russia by the US and has essentially penalized the Moscow and Ruble bourses. At the present stage, it can not be excluded that it can reach the European sectors most exposed to this country, namely drinks, luxury goods and the automobile.
Market View; World Stock Press review Forecast and levels for

1276
psaTrading 2018.04.13 11:43 2018.04.13 13:43:14 #295
US indexes closed higher at a session in which the situation in Syria and relations between Russia and the US dominated investors’ attention. As has happened in recent weeks was a tweet from President Trump that dictated the course of the American indices. After Syria’s most bellicose tweet on Syria and Russia’s ability to wage an American attack, the American President has always stated through his preferred means of communication that he has never advanced when an attack on Syria will occur. Uncertainty in financial markets remains high, resulting in greater volatility and a move away from more conservative investors. The valuation of bank shares was another catalyst for yesterday’s rally. The earnings season officially kicks off today and coincides with the debut of the banking sector earnings season. Today, quarterly accounts of Wells Fargo, Citigroup and JP Morgan will be published. The rise in yields, the dynamism of the labor market and the economy as a whole, as well as the decline in the tax rate, create a favorable environment for US banks.
World Stock Indexes Trading Market View; World Stock Forex News 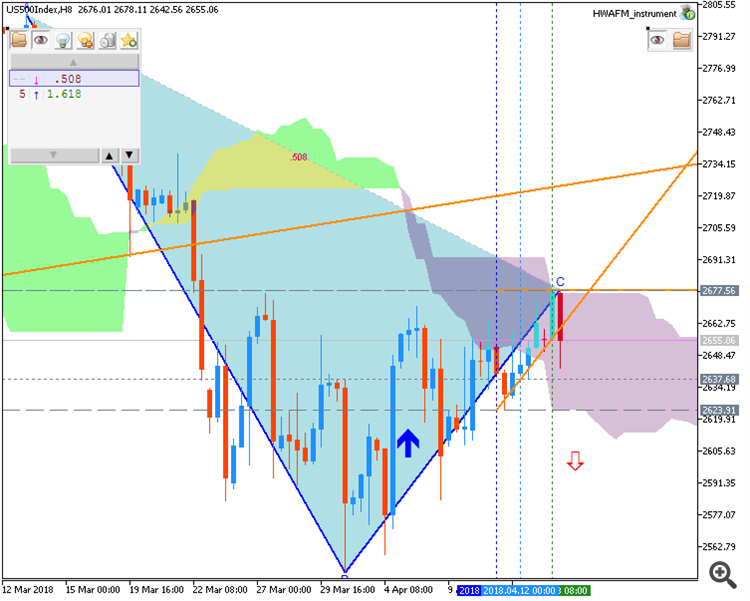 S&P 500 - "Looking ahead to next week, the calendar is light on data with the only ‘high’ impact release arriving on Monday via the March Advance Retail Sales figures. Geopolitical tensions with Syria/Russia and ‘trade war’ talk could continue to be a threat on the headline front. The S&P continued last week to be volatile but without much direction as it sorts itself out following another test of the 200-day MA and Feb 2016 trend-line. A boost higher out of the coiling range could have the index poised for a test of the trend-line off the highs in the vicinity of 2735. A push back lower will have big support in focus, but for as long as it holds the market will remain neutral at worst. A breakdown with momentum will be required to shift the focus towards another risk-off event."

The chart was made on Metatrader 5 using HWAFM tool pattern tool from this post.

1276
psaTrading 2018.04.16 11:50 2018.04.16 13:50:08 #297
The sharp reversal of the financial sector’s trend, last friday, can be explained by the fact that the good results of some of its members could have been anticipated by the increases that their stocks achieved in previous sessions.
World Stock Indexes Trading Astro... Review Of Strategic Tips

1276
psaTrading 2018.04.17 19:01 2018.04.17 21:01:49 #299
European markets closed higher, having been helped in part by the positive trend seen on Wall Street. Producers of raw materials have distinguished themselves by being among the best performers, as it is a sector very exposed to China and today favorable data on this economy have been known. In the first quarter, the GDP of this country grew 6.80%, marginally exceeding the forecasts of 6.70%. In addition, retail sales increased by 10.10% in March (vs. 9.70% est.) And industrial production by 6% (vs 6.30% est.). In the first quarter, investment in fixed assets rose 7.50%. On the contrary, companies related to household items were penalized by the fact that Credit Suisse reduced its recommendation from 'neutral' to 'underperformance'. On the macroeconomic level, the Zew sentiment index for German financial agents fell for the third consecutive month to -8.2, the lowest level since November 2012.
Market View; World Stock *Daily Forex market overviews Press review