European markets closed lower, losing part of the gains they conquered yesterday. The celebration of the Thanksgiving holiday in the US withdrew some liquidity to today's session, which showed below average volumes. The sectors that contributed the most to today's flexion were mining and telecommunications. The fall of the banking sector has been softened by the rise of transalpine banks. After the European Commission rejected the Italian State Budget, local investors seem to believe that the government of Rome is taking a more conciliatory stance, despite the statements of some of its members.
The US market is closed today to commemorate the Thanksgiving day.
Market View; World Stock World Stock Indexes Trading USDCAD news

The European indices closed with contained valuations. In its opening hours, the European session was characterized by a resilience to the significant drop in Chinese stock markets (which accumulated losses of more than 2%). The volume traded was below average due to the reduced session in New York. Perhaps the European markets would have been able to achieve more significant gains had it not been for the sharp falls in the mining and oil sectors. Oil traded at the lows last year, with Brent reaching 60USD/barrel. To reinforce the recent downward trend has now been the news that Saudi Arabia's production is at its maximum and that US oil reserves have been increasing. The decline in oil was spreading the trend of other industrial raw materials. On the positive side, the stocks associated with tourism and pharmaceuticals emerged. At the macroeconomic level, the PMI indices, related to economic activity and services, were bending relative to October. The November readings were also below expectations, confirming the decline in economic growth in the Euro Zone.
US stocks were trading at a loss. The session today is shorter, ending at 6 PM GMT. The main hallmark of the session, in addition to the drop in oil prices, was the overperformance of stocks more focused on the domestic economy (customized by the Russell2000 index), which contrasted with selling pressure on top technology stocks.
Market View; World Stock World Stock Indexes Trading LiteForex Analytics

European indexes closed with valuations above 1%. The deal reached over the weekend for Brexit, the latest news from Italy and the rise in crude oil were the main catalysts of this rise. The understanding reached between the European Union and the UK over the weekend softened the nervousness among investors. British stocks and pound sterling traded higher. However, on the horizon lies the challenge that Prime Minister Theresa May will face: to bring together an internal consensus capable of securing Parliament's approval of the agreement drawn up over the weekend. The Italian market was the best performer of the day. To galvanize the transalpine investors and to reflect their European peers was the news reported by the local press. According to this source, Deputy Prime Minister Matteo Salvini, who has led the tough wing of the Government in its relationship with Brussels, has opened the possibility of the 2019 Budget to undergo some tinkering in order to reassure international investors. The increase in crude oil led to the appreciation of its sector as well as that of the miner, with which it has a high correlation. At the macroeconomic level, the IFO index, which measures the sentiment of German entrepreneurs, fell from 102.6 in November to 102.0, a level also below the forecast of 102.3.
US markets were trading higher, with volumes recovering after the festive period late last week. The catalyst for the climb was the first numbers of the shopping season (or holiday season) and its positive effects in the technological sector as well as the recovery of crude. Although definitive figures are not yet available, on Black Friday, online purchases amounted to 6200 M.USD, which represents a 24% increase over the same day of 2017.
GBPUSD news Market View; World Stock Press review 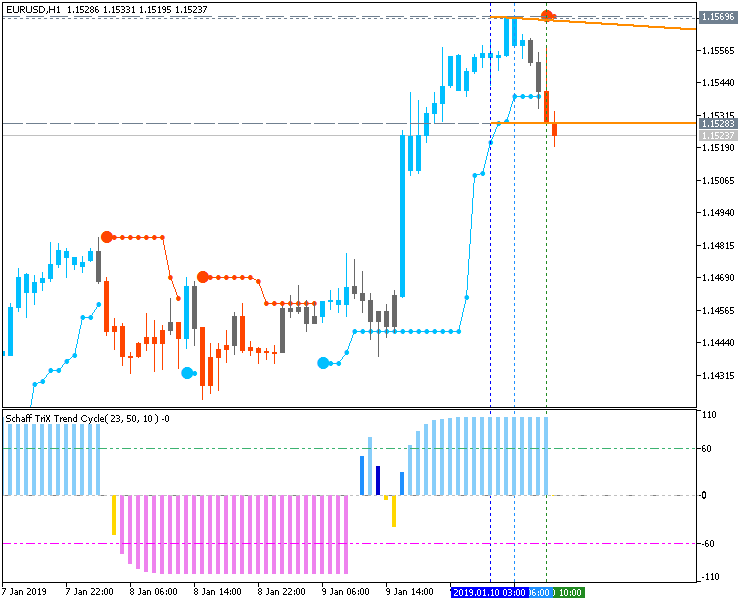 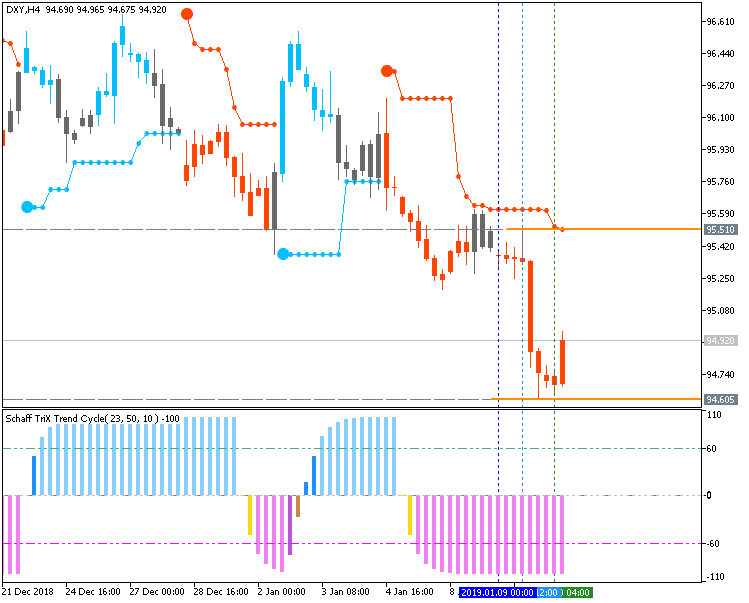 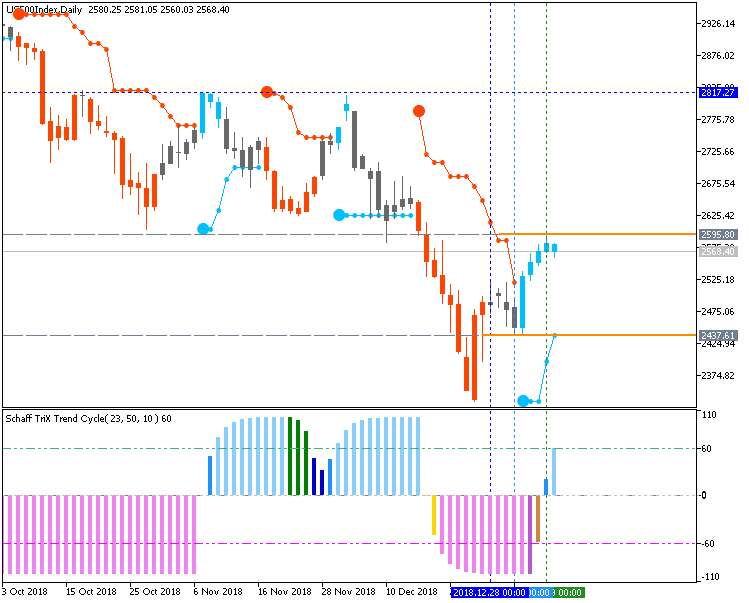 S&P 500 - breakout with weekly reversal (based on the article)

The charts were made on weekly timeframe with Ichimoku market condition setup (MT5) from this post (free to download for indicators and template) as well as the following indicators from CodeBase:

Press review Forecast and levels for Market Condition Evaluation based

How can I track other stocks on here, like AMZN or PYPL, CGC, …?

How can I track other stocks on here, like AMZN or PYPL, CGC, …?

Yes, if you want.
But the symbols (stocks) are related to the broker (it is not related to Metatrader).
Different broker = different symbols.
Yes, some brokers are proposing AMZN and so on for trading.


Yes, if you want.
But the symbols (stocks) are related to the broker (it is not related to Metatrader).
Different broker = different symbols.
Yes, some brokers are proposing AMZN and so on for trading.

This is example with two brokers - 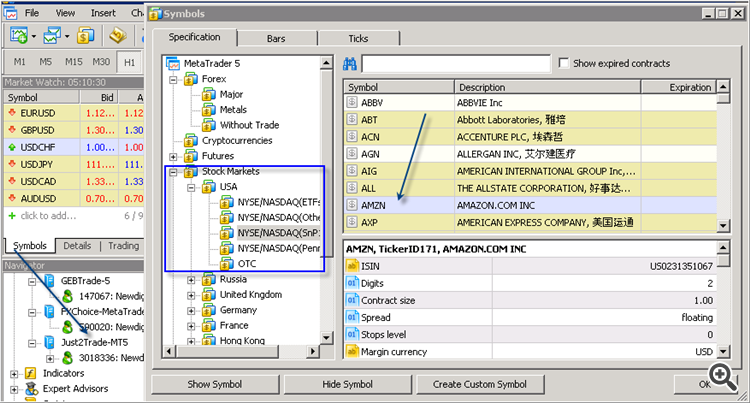 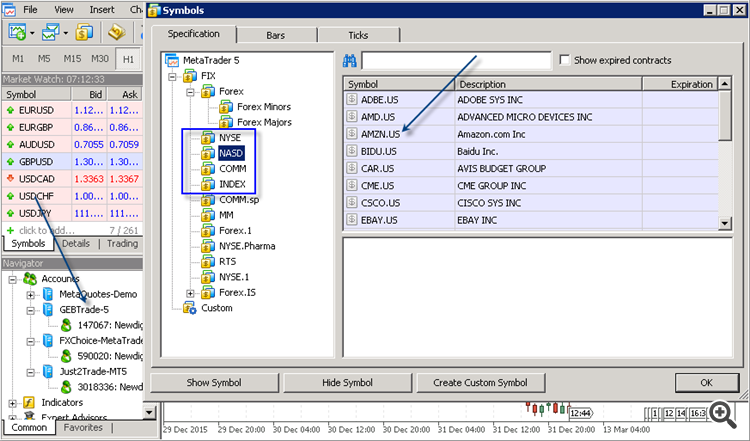 The chart was made on MT5 with standard indicators of Metatrader 5 together with the following indicator from CodeBase: