1276
psaTrading 2018.05.18 00:09 2018.05.18 02:09:39 #321
European stock markets ended higher, with utilities among the best performers. French Suez reported results that were well received by investors, with revenues surpassing forecasts. Its shares gained 3.60%. Also the stocks of retailers stood out positively, favored by the behavior of the online retailer Ocado. However, the rise in the price of oil benefited the respective sector. Total rose more than 1%. According to CNBC, the French oil company is considering abandoning its activity in Iran. In the telecommunications sector, the Dutch company Altice advanced 12%, with the news that SFR, its French division, showed signs of recovery in the first three months of the year.
Forex News (from InstaForex) Market View; World Stock Daily Market Reviews by

1276
psaTrading 2018.05.18 10:20 2018.05.18 12:20:32 #322
In the pre-opening, the European indices rehearsed in different directions, in a context of intensification of the geopolitical tensions, after the declarations of the North American President. The debt market will continue to be monitored after the 10-year U.S. treasury yield have peaked at seven-year highs. On the other hand, the rise in the price of oil (favored by strong demand and continued cuts in production by OPEC) is expected to continue to influence its sector and the market as a whole.
World Stock Indexes Trading Market View; World Stock LiteForex Analytics 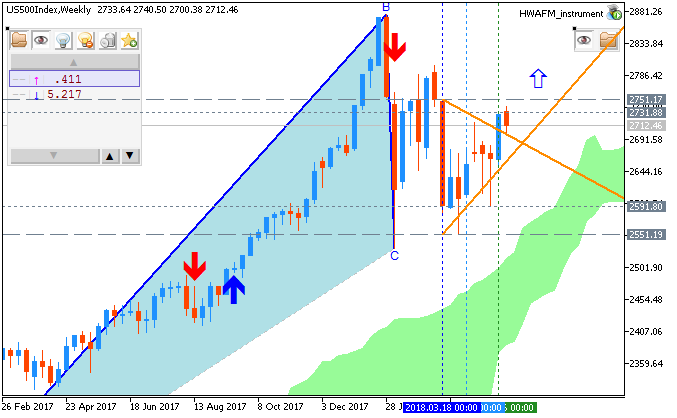 The chart was made on Metatrader 5 using HWAFM tool pattern tool from this post.

1276
psaTrading 2018.05.21 11:47 2018.05.21 13:47:50 #324
In the pre-opening, the European indices continued to rise, reflecting the positive developments in trade relations between the US and China. However, the activity of European markets will be less than usual due to the celebration of Pentecost Day in mostly Protestant countries like Germany and Switzerland. Even so, an initial positive reaction is likely from the sectors most prone to exports (especially to China) such as the automobile, mining, industrial, and others. After this reaction, European investors will focus on two interrelated themes: sovereign yields and the evolution of the political situation in Italy.
Market View; World Stock World Stock Indexes Trading Press review

1276
psaTrading 2018.05.22 16:23 2018.05.22 18:23:32 #325
Recent developments in the face of trade tensions between the US and China have cheered the European stock markets in this first session of the week.
The stock market activity was less intense as the Frankfurt and Swiss stock exchanges were closed yesterday for the celebration of Pentecost Day.
Market View; World Stock Traders joking, the beginning Requests & Ideas

1276
psaTrading 2018.05.23 12:03 2018.05.23 14:03:49 #326
Recent declines in the Euro have led the common currency to the most extreme oversold levels since November 2016. Yesterday the Euro showed some signs of stabilization, which may be the prelude to a short-term technical recovery.
World Stock Indexes Trading ForexPeoples Daily Technical Analysis Eur/usd

1276
psaTrading 2018.05.26 17:12 2018.05.26 19:12:36 #328
Yesterday European markets ended slightly lower. The uncertainty associated with the political scenario in Italy continued to influence investor sentiment and had repercussions on the stock and debt markets. Banks' stocks were the most penalized. In the foreign exchange market, the Euro maintained its downward trajectory against the US Dollar, thus moving towards the 6th consecutive week of falls.
Next Monday, American markets will be closed, celebrating the Memorial Day.
Market View; World Stock UWC Currency Forex News

1276
psaTrading 2018.05.29 17:15 2018.05.29 19:15:27 #329
The political situation in Italy and Spain created a scenario of fear and risk aversion that was seen today in the financial markets. In Italy, Carlo Cottarelli, nominated by the President of the Republic, will try to form a government that is likely to be presented tomorrow to the President and will have to submit to the vote of the Parliament and the Senate. Despite the charisma it brings, it is unlikely that Cottarelli’s team will win the vote of the two legislative chambers, both dominated by the 5 Stelle Movement and Lega Nord. On the other hand, in Spain Parliament debates on Thursday and Friday the motion of censure presented by the Socialists, after the sentence of the National Audience, which condemned the Popular Party (led by Rajoy) for one of the most corrupt cases in recent years in Spain.
Forex News EUR/USD: Trading The Italian The big fat Greek

1276
psaTrading 2018.05.30 18:16 2018.05.30 20:16:48 #330
Fears about the political situation in Italy have eased, giving investors some less risk aversion. The main indexes closed in different directions. In the foreign exchange market, the Euro recovered part of the lost ground in the previous sessions, having been fixed against the Dollar at USD 1.16. In business terms, Bayer rose more than 4 percent as investors monitored the news that US authorities had authorized the purchase of Monsanto by the German company for 66 M.USD after a two-year process, which lays down the obligation to establish the sale of the agricultural unit of Bayer to BASF. Regarding the economic indicators published today, the consumer confidence index in the Euro Zone fell in May from 112.7 to 112.5.
EUR/USD Forecast - Parity Press review *Daily Forex market overviews
1...262728293031323334353637383940...47
To add comments, please log in or register