EUR/USD was looking for a new direction as politics continued moving markets. The upcoming week features PMIs and some business surveys. 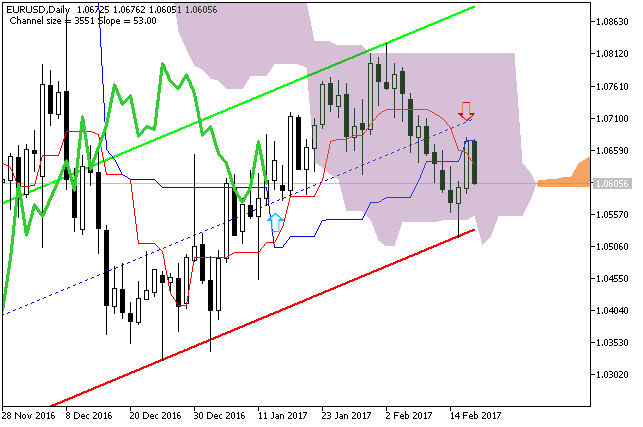 EUR/USD Forecast Feb. 20-24 | Forex Crunch
EUR/USD was looking for a new direction as politics continued moving markets. The upcoming week features PMIs and some business surveys. Here is an outlook for the highlights of this week and an updated technical analysis for EUR/USD. German GDP came out below expectations, dragging the overall GDP figures lowers. However, the European...
Forecast for Q1'17 - EURUSD Technical Analysis 2016, Market Condition Evaluation based

[NZD - PPI Input] = Change in the price of goods and raw materials purchased by manufacturers. 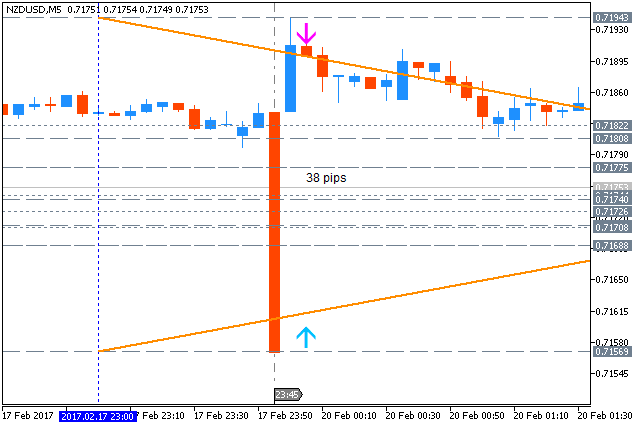 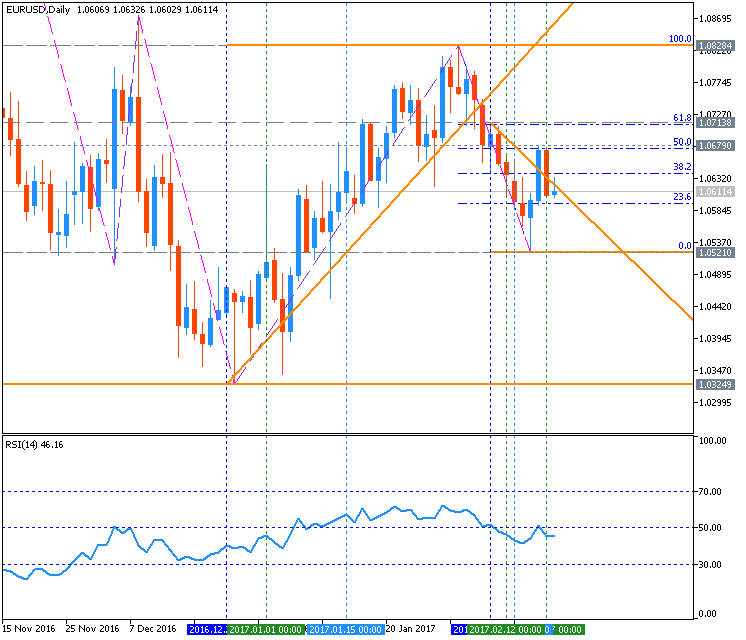 EUR/USD Technical Analysis: Sellers Ready to Retake Initiative?
sharp Euro recovery stalled at a familiar chart barrier below the 1.07 figure, hinting that a corrective bounce from a monthly low may have been exhausted. Near-term positioning has favored the downside since prices broke through the floor of a bearish Rising Wedge chart pattern two weeks ago. Near-term support is in the 1.0518-28 area...
Market Condition Evaluation based Forecast for Q1'17 - Forecast for Q2'16 -

[CAD - Wholesale Sales] = Change in the total value of sales at the wholesale level. 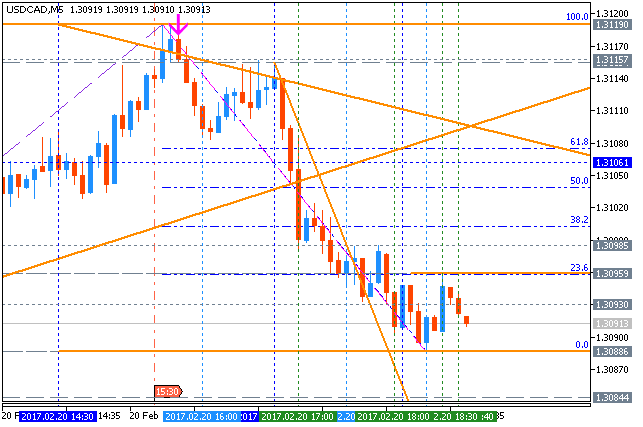 Forecast for Q1'17 - Forecast and levels for Brainwashing System / Asctrend

[AUD - Monetary Policy Meeting Minutes] = Detailed record of the RBA Reserve Bank Board's most recent meeting, providing in-depth insights into the economic conditions that influenced their decision on where to set interest rates. 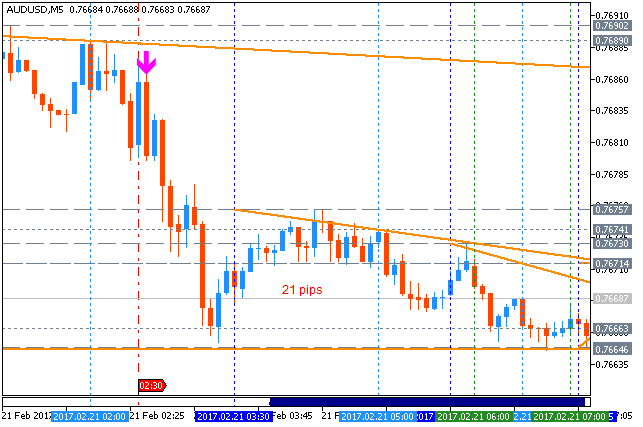 Minutes of the Monetary Policy Meeting of the Board | RBA
Minutes of the monetary policy meetings of the Reserve Bank Board are published two weeks after each meeting, and explain the monetary policy decision. The Reserve Bank Board normally meets eleven times each year, on the first Tuesday of each month, except January.
Forecast for Q1'17 - Market Condition Evaluation based Forecast and levels for

Shares price is located in the bullish area of the daily chart above Ichimoku cloud: the price is continuing with the secondary correction by breaking descending triangle pattern together with 105.65 support level to below for the correction to be continuing. If shares break 99.00 support level so the bearish reversal may be started, if not so the price will be on bullish ranging wityyhin Ichimoku cloud. 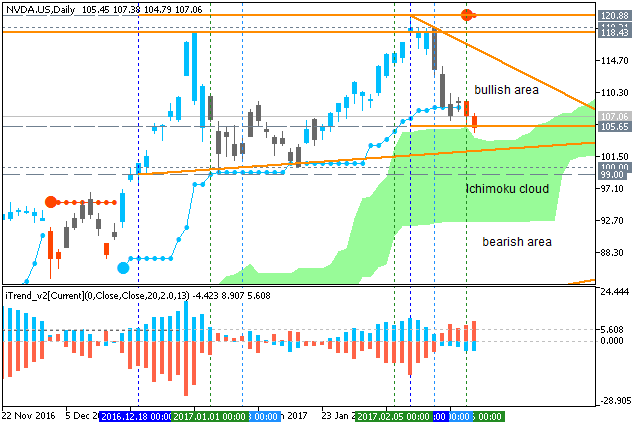 "NVIDIA Corp. after Thursday's close Feb 09, 2017's close. This leading stock was one of the strongest performing stocks in 2016. Nvidia hit a record high of $120.92/share in 2017 and is currently trading near $107/share. The stock is prone to big moves after reporting earnings and fell about $10 in the days after reporting earnings. Currently, it is testing its 50 day moving average lines which is a common area of support. The bulls want to see that level hold and for the stock to bounce higher from here." 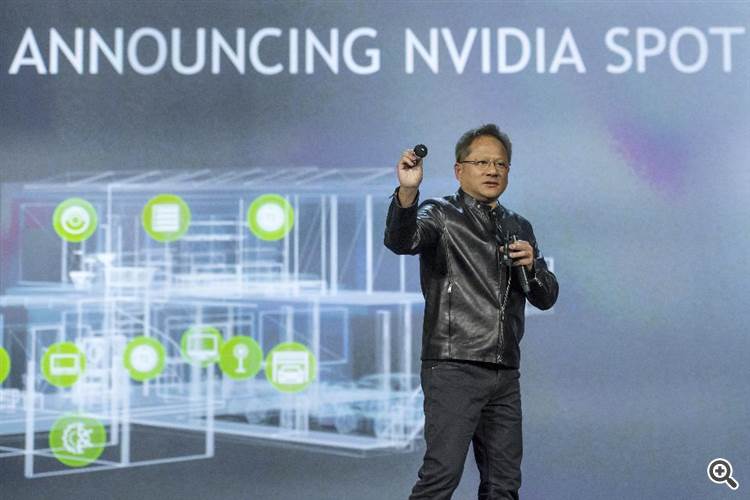 "Jen-Hsun Huang, president and chief executive officer of Nvidia Corp., holds the Nvidia Spot as he speaks during a keynote presentation at the 2017 Consumer Electronics Show (CES) in Las Vegas, Nevada, U.S., on Wednesday, Jan. 4, 2017. Nvidia, the biggest maker of graphics chips, announced a new version of its Shield set-top box and the debut of an online service designed to bring millions of new consumers to high-end computer games."

HSBC: breakdown to bearish reversal Senkou Span level (based on the article)

Daily share price broke support levels to below: the price is testing 41.50/41.15 levels which are located near Senkou Span line to be reversed to the primary bearish market condition. 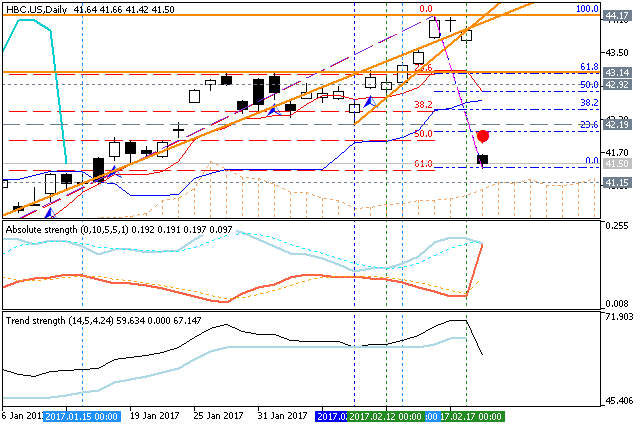 S&P 500 Technical Outlook: More of the Same for Now (based on the article)

Daily price is on bullish market condition to be above Ichimoku cloud: price broke 2351 resistance level to above for the bullish trend to be continuing. 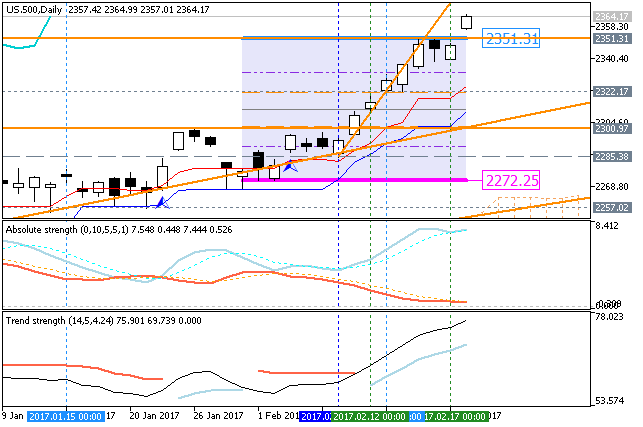 S&P 500 Technical Outlook: More of the Same for Now
The relentless rise in the U.S. continued on Friday with new record closes in the major indices; the S&P 500 has tacked on about 13% since it bottomed ahead of the U.S. presidential election in November. As we said last week, the market appears to be in a . When and where it stops is difficult to predict, but risk is clearly rising for fresh...
Forecast and levels for Forecast for Q1'17 - Forecast for Q4'16 -

Who Can Trade a Scalping Strategy? (based on dailyfx article)

The term scalping elicits different preconceived connotations to different traders. Despite what you may already think, scalping can be a viable short term trading methodology for anyone. So today we will look at what exactly is scalping, and who can be successful with a scalping based strategy. 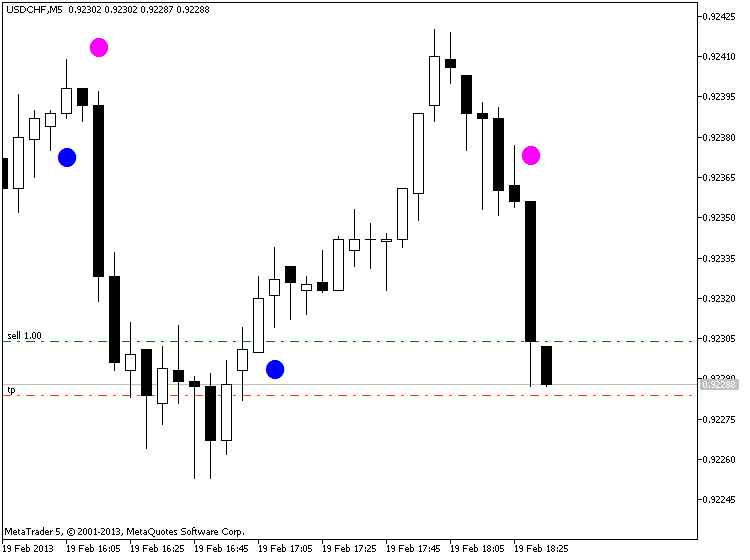 What is a Scalper?

So you’re interested in scalping? A Forex scalper is considered anyone that takes one or more positions throughout a trading day. Normally these positions are based around short term market fluctuations as price gathers momentum during a particular trading session. Scalpers look to enter the market, and preferably exit positions prior to the market close.

Normally scalpers employ technical trading strategies utilizing short term support and resistance levels for entries. While normally fundamentals don’t factor into a scalpers trading plan, it is important to keep an eye on the economic calendar to see when news may increase the market’s volatility. 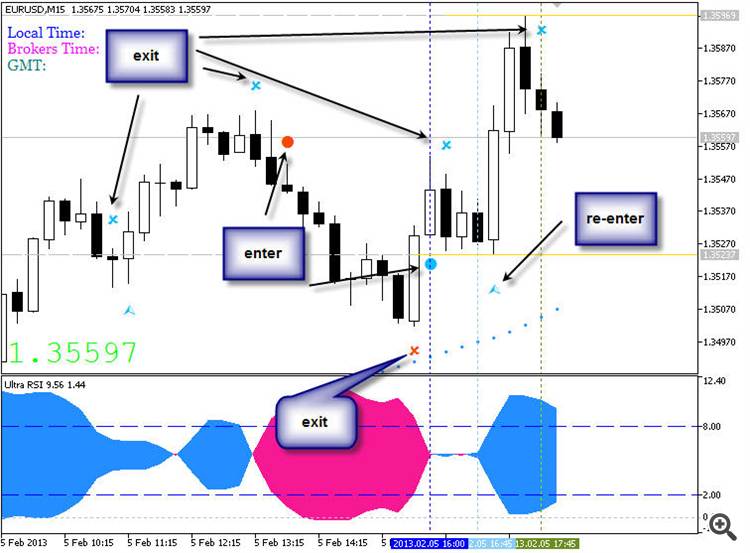 There is a strong misconception that all scalpers are high frequency traders. So how many trades a day does it take to be considered a scalper? Even though high frequency traders ARE scalpers, in order for you to qualify as a scalper you only need to take 1 position a day! That is one of the benefits of scalping. You can trade as much or as little as you like within a giving trading period.

This also falls in line with one of the benefits of the Forex market. Due to the 24Hr trading structure of Forex, you can scalp the market at your convenience. Take advantage of the quiet Asia trading session, or the volatile New York – London overlap. Trade as much or as little as you like. As a scalper the choice is ultimately yours to make!

There are always risks associated with trading. Whether you are a short term, long term, or any kind of trader in between any time you open a position you should work on managing your risk. This is especially true for scalpers. If the market moves against you suddenly due to news or another factor, you need to have a plan of action for limiting your losses.

There are other misconceptions that scalpers are very aggressive traders prone to large losses. One way to help combat this is to make scalping a mechanical process. This means that all of your decisions regarding entries, exits, trade size, leverage and other factors should be written down and finalized before approaching the charts. Most scalpers look to risk 1% or even less of their account balance on any one position taken!

So this brings us to the final question. Who can be a scalper? The answer is anyone with the dedication to develop a trading strategy and the time to implement that strategy on any given trading day.

Crude Oil Price Forecast: ranging within narrow 57.42/53.56 levels (based on the article)

Daily price is located on the bullish area of the chart to be above 100-day SMA/200-day SMA reversal: the price is on ranging within narrow 57.42/53.56 support/resistance levels for the 57.42 level to be testing to above for the bullish trend to be continuing. 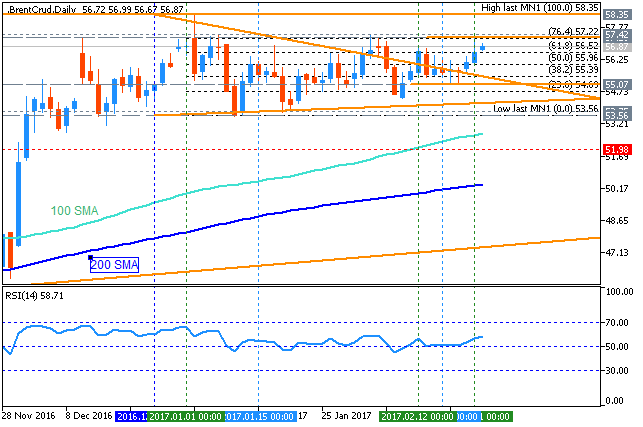