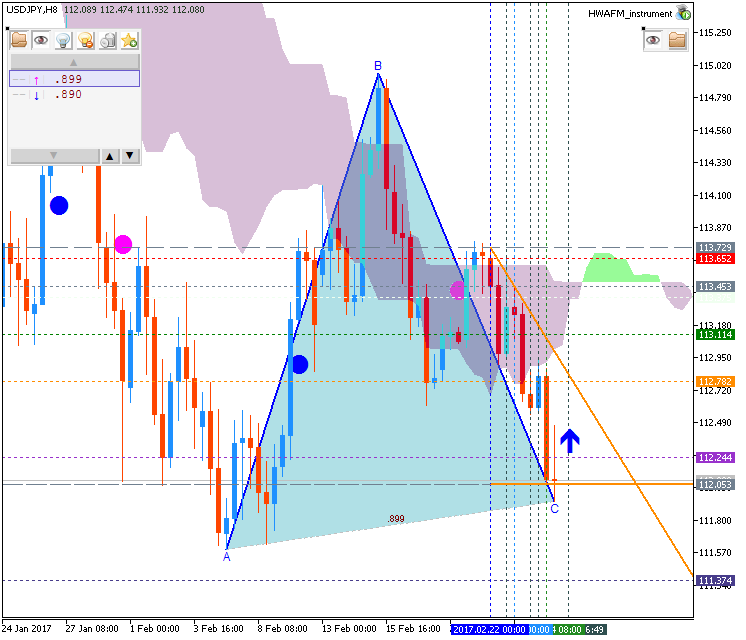 USD/JPY - "The big item on the calendar for next week is January CPI, set to be released on Thursday evening (Friday morning in Asia, Europe). Due to the uniqueness of the Japanese economy, the bank follows a few different gauges of importance. There is the ‘all items’ index, which is basically just headline CPI, including all relevant products in the followed basket. But Core CPI in Japan (this is what the BoJ targets) includes Oil products while stripping out the more volatile fresh food items. And then there is the ‘All items, less food and energy’ (this would be similar to a traditional ‘Core CPI’ reading from another economy in Europe or the United States). The expectation for next week’s CPI read is that we’ll finally see Core CPI flatten out after declining for 10 consecutive months, further adding fuel to that recent theme of improvement that’s helped Mr. Kuroda take a slightly less-dovish stance to markets. A Core inflationary read anywhere above 0% will likely stoke additional Yen-strength, as bets for more monetary stimulus further price-out of Japanese markets." 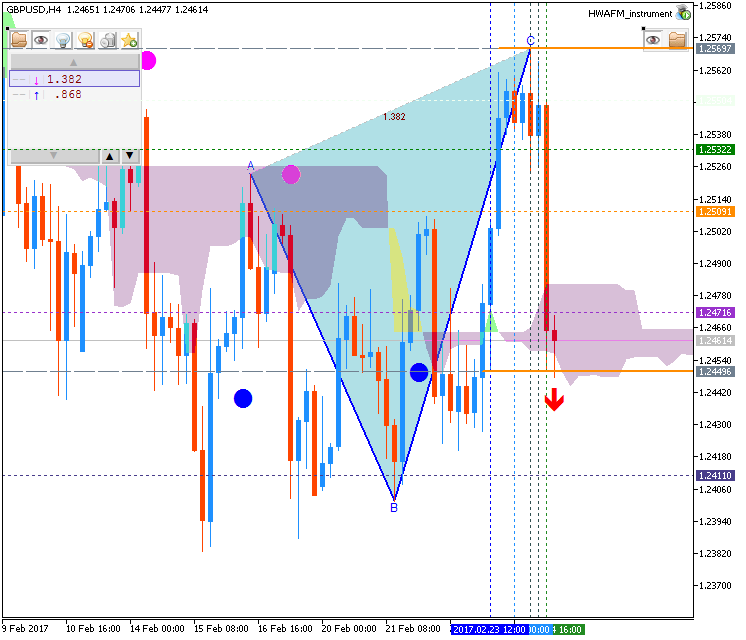 GBP/USD - "The BoE’s wait-and-see approach may continue to prop up the British Pound as the central bank drops it dovish tone, but the bearish sentiment surrounding the British Pound may gather pace over the coming months as the U.K.’s departure from the U.K. dampens the long-term prospects for sustainable growth. Indeed, the stickiness in the pound-dollar exchange rate may start unravel over the coming days should the batch of key U.S. data prints boost interest-rate expectations. A rebound in U.S. Durable Goods Orders accompanied by an upward revision in the 4Q Gross Domestic Product (GDP) report may encourage the Federal Open Market Committee (FOMC) to adopt a more hawkish tone at the next interest rate decision on March 15, and the slew of fresh speeches from the group of 2017 voting-members (Dallas Fed PresidentRobert Kaplan, Philadelphia Fed President Patrick Harker, Fed Governor Lael Brainard, Fed Governor Jerome Powell, Fed Vice-Chair Stanley Fischer and Chair Janet Yellen) may heighten the appeal of the greenback should a growing number of central bank officials show a greater willingness to further normalize monetary policy ‘sooner rather than later.’ Even though the FOMC Minutes failed to boost bets for a March rate-hike, Fed Fund Futures continue to price a greater than 60% probability for a move in June, and the deviating paths for monetary policy continues to instill a long-term bearish forecast for GBP/USD especially as the BoE keeps the door open to further embark on its easing-cycle." 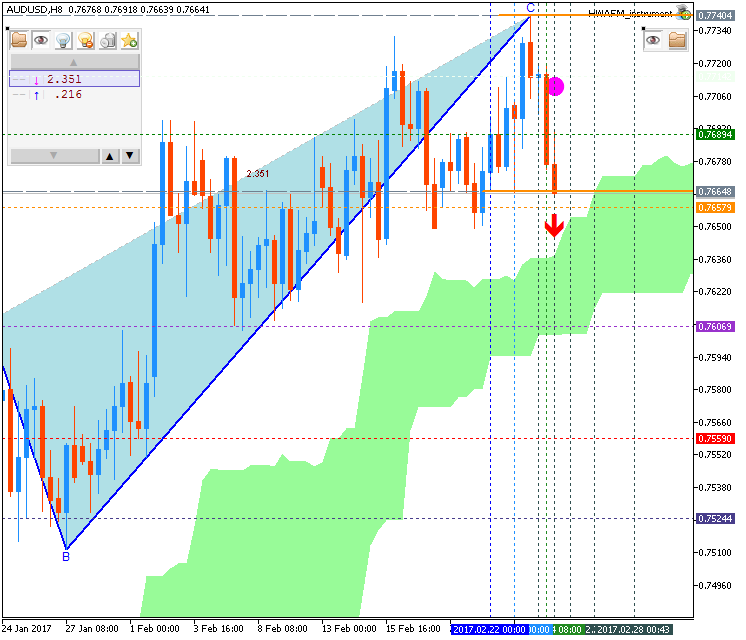 AUD/USD - "Well, none of the good news is ever quite enough to move the dial on comparative interest-rate expectations between Australia and the US. That leaves the market stuck with the now-aging thesis that while US interest rates are going up, Australian rates are staying put at record-low levels. But will the interest rate backdrop change? Probably not. Unless GDP growth absolutely storms away, then the RBA will remain cautious. The US Federal Reserve is – as we know – on track to raise rates “fairly soon,” so while AUD/USD may not fall, it will still be struggling for reasons to rise far." 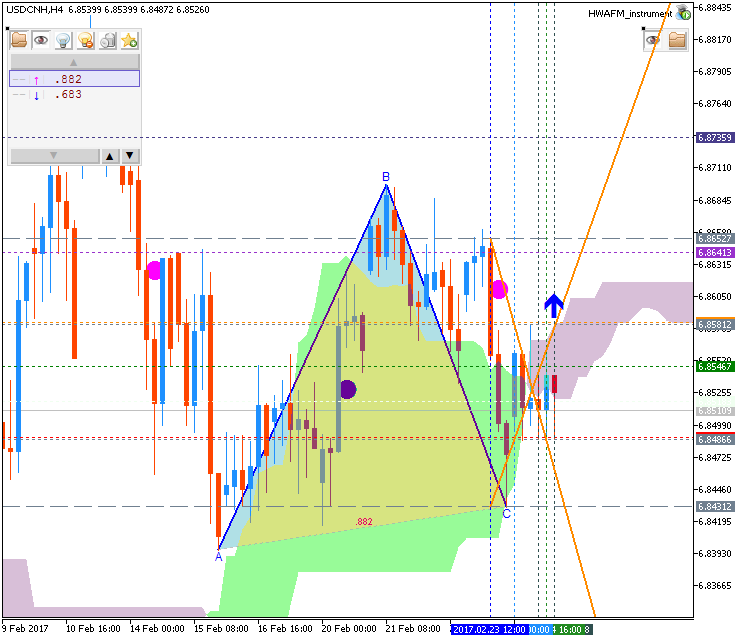 USD/CNH - "One of the most important events for the NPC conference will be Premier Li Keqiang’s government work report. This will be delivered at the opening day of the NPC meetings. Economic growth and CPI targets for 2017 are expected to be released in this report. Another key measure to be released in the report is the fiscal deficit ratio, which reflects China’s fiscal policy. China’s Central Bank has been tightening liquidity in the effort to bring monetary policy back to neutral, from slightly loose. Within such context, the country may have to reply more on fiscal policy to stimulate the economy. In the annual Central Economic Work Conference held in December 2016, policymakers told that China will adopt a more proactive fiscal policy." 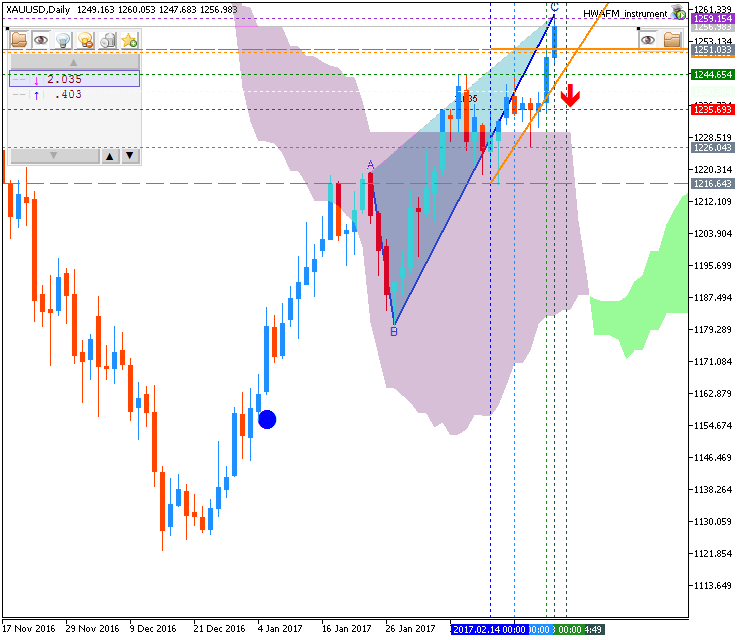 GOLD (XAU/USD) - "U.S. economic data picks up next week with traders eyeing the release of Durable Goods Orders, the second read on 4Q GDP and the Core Personal Consumption Expenditure (PCE) - the Fed’s preferred gauge on inflation. Keep in mind we have a host of voting FOMC speakers on tap next week with Dallas Fed President Robert Kaplan, Philadelphia Fed President Patrick Harker, Fed Governor Lael Brainard, Fed Governor Jerome Powell, Fed Vice-Chair Stanley Fischer and Chair Janet Yellen slated for commentary. Continued strength in US data may further the argument for a March rate-hike as a growing number of central bank officials favor normalizing monetary policy “sooner rather than later.” That said, a fresh batch of hawkish commentary may curb demand for gold prices which have surged more than 9.4% year-to-date." 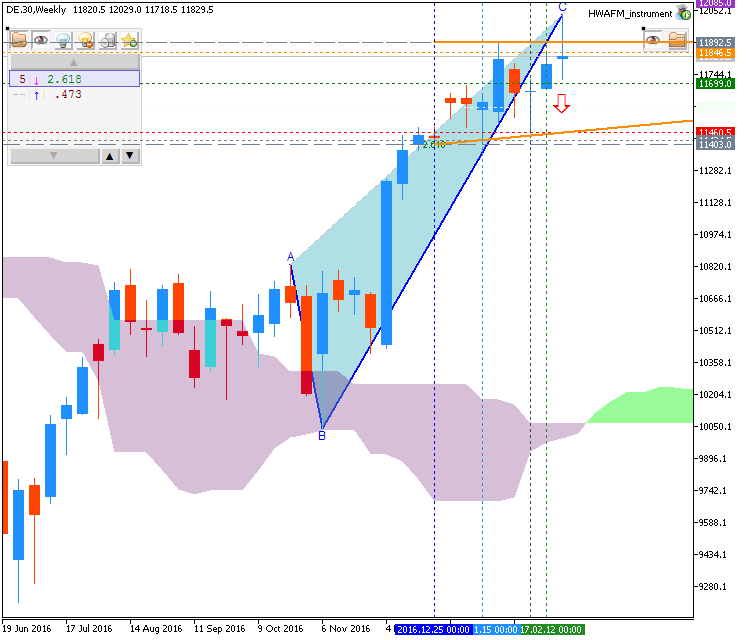 DAX Index - "Key Eurozone and German data on the docket begins with Eurozone CPI at 10:00 GMT on Tuesday; German employment data on Wednesday at 8:55, and later in the day German CPI at 13:00; Friday we will get a look at Italian GDP for Q4 at 9:00, but not likely to have much impact on German equities. Moving on to the chart: The DAX broke hard on Friday, shedding 1.2%, just a couple of days after touching off a confluence of top-side trend-lines. The break lower held at the December trend-line, managing to put in the day’s low just beneath it. The index will need to respond shortly to support or else we will have to start looking for more selling towards the next area of significant support in the 11400/500 vicinity." 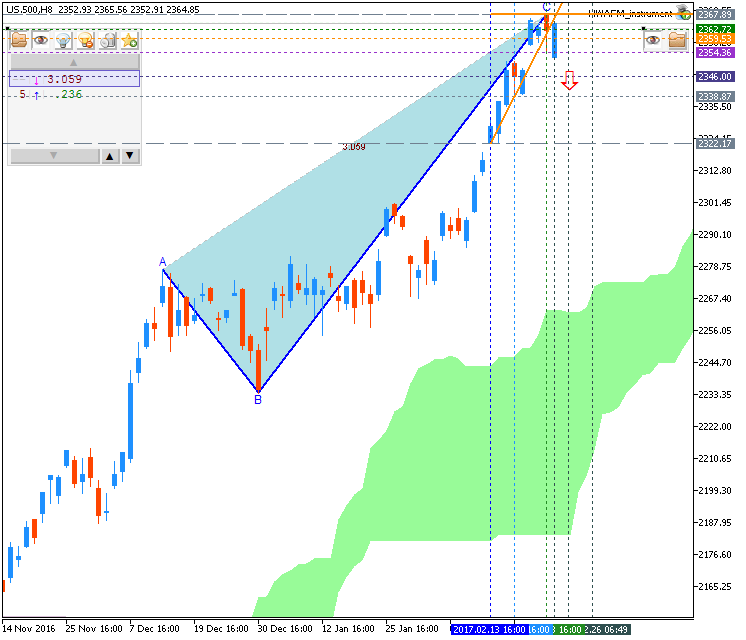 S&P 500 - "Looking to the most important scheduled economic events in the U.S., we start the week off on Monday with Durable Goods Orders at 13:30 GMT; Tuesday holds Q4 GDP at 13:30 as well as Advance Goods Trade Balance, followed by Consumer Confidence at 15:00; Wednesday brings Core Personal Consumption Expenditure at 13:30, then ISM Manufacturing at 15:00; and to end the week ISM Services/Non-manufacturing at 15:00, followed by Yellen speaking in Chicago at 18:00." 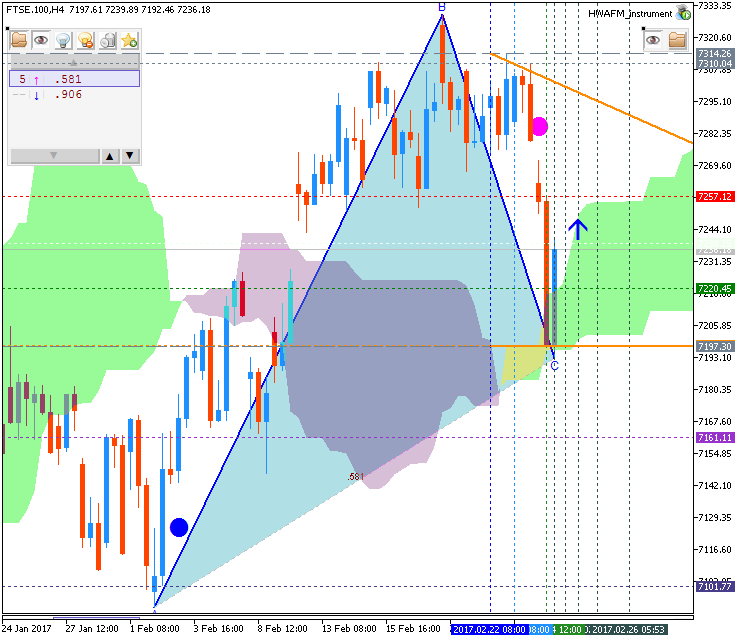 FTSE 100 - "The UK isn’t set to release any ‘high’ impact data this coming week, but there are a few minor data points to watch out for. Technically speaking, the FTSE began rolling over a few days prior to the other indices, and took a hard spill for much of Friday before an afternoon rebound. Should we continue to see last week’s beginnings of ‘risk-off’ continue we will look to the Friday low at 7192 first, then the June trend-line(s) and prior record highs near 7100 as support. On the top-side, some work will need to be done in order to restore good technical posturing. Keep an eye on sterling, the correlation between GBPUSD and the FTSE sits at -65% on a 21-day basis. A sharp move in the currency could very well have an impact on how the 100 trades."

Weekly Trading Forecast: Trump Speech May Define Market Mood
Financial markets may overlook ample top-tier economic data and a steady stream of central bank commentary as a pivotal speech from US President Donald Trump
Stock Market A To Forecast and levels for The Importance Of News 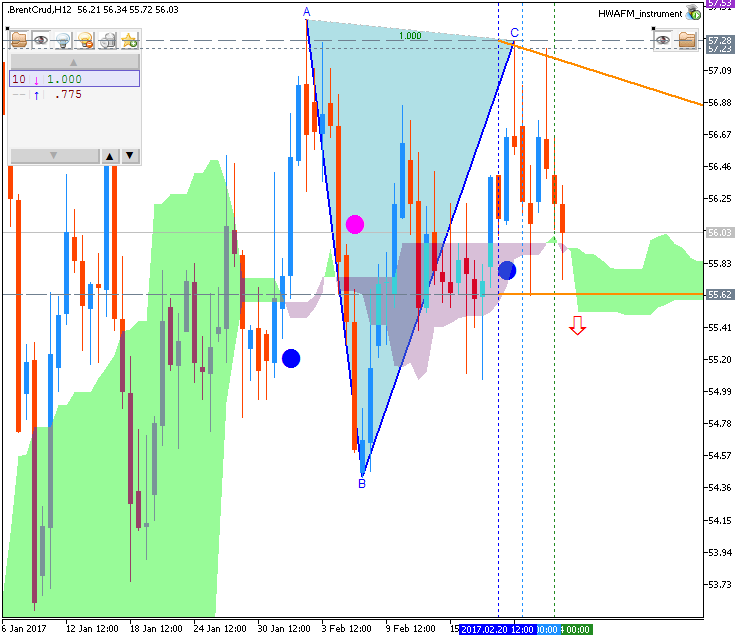 Brent Crude Oil - "The Oil market finds itself in a unique spot of the commodity landscape of Q117. Two of the largest global suppliers, the United States Shale Oil Producers and the Organization of Petroleum Exporting Countries (OPEC) are trending in different directions while the price seems to have stalled near the 2017 Opening Range high. The focal points for the energy market next week will remain Wednesday’s EIA Petroleum Supply Report at 10:30 AM ET and Friday’s Baker-Hughes Rig Count at 1:00 PM ET." 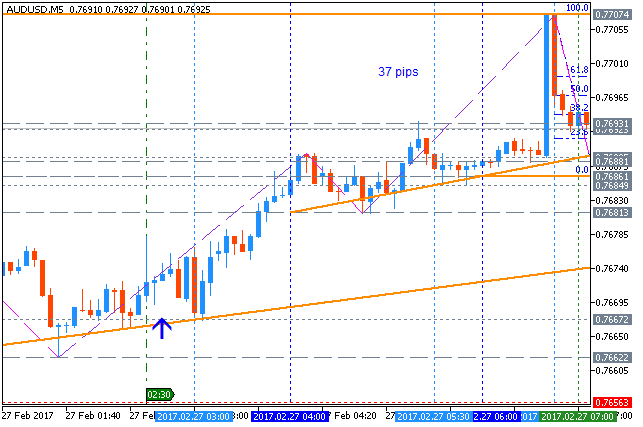