The indicator represents the relative convergence/divergence of the moving averages of the financial asset, increased a hundred times. It is based on a different principle than the ADX. Chande suggests a 13-week SMA as the basis for the indicator. It represents the quarterly (3 months = 65 working days) sentiments of the market participants concerning prices. The short moving average comprises 10% of the one and is rounded to seven.

Essentially, the proposed indicator is quite simple and almost identical to the Price Oscillator and MACD. The uniqueness is in the use of the price convergence-divergence value as the trend indication, paying attention to the divergence and not the crossing of the averages.

After examining the plotting method of the АDХ, it can be said that the indicator has two smoothings. RAVI has one smoothing. This makes the indicator more sensitive. With the specified values, it warns about the beginning and end of a trend earlier than an 18-day ADX.

The indicator uses SmoothAlgorithms.mqh library classes (copy it to <terminal_data_folder>\MQL5\Include). The use of the classes was thoroughly described in the article "Averaging Price Series for Intermediate Calculations Without Using Additional Buffers".

Originally this indicator has been written in MQL4 and was first published in the Code Base on 15.02.2008. 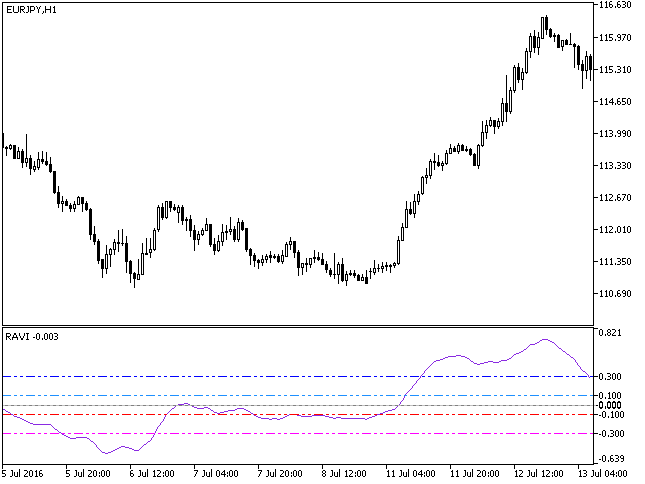 The Exp_PPO_Cloud EA is based on the signals generated by the PPO_Cloud oscillator.

The PPO_Cloud indicator with the timeframe selection option available in input parameters.

Semaphore signal indicator based on the relative smoothed rate of price change.

The indicator colors the candlesticks according to B. Williams.