HOW TO TRADE: The Three Drives Pattern - Harmonic Ratios and Explanation

Sergey Golubev
0
2 846
One of the first references to a Three Drives pattern was outlined in Robert Prechter's book, "Elliot Wave Principle." He described the general nature of price action that possessed either a three-wave or a five-wave structure.

Adapted from this principle, symmetrical price movements that possess identical Fibonacci projections in a 5- wave price structure constitute a Three Drives pattern.  In "The Harmonic Trader," the patterns importance of other larger retracements and projections improved the accuracy of the pattern in real trading situations.  The book was one of the first to emphasize the the critical aspect of this pattern that each drive complete precisely at consecutive harmonic ratios - either a 1.13, 1.27 or a 1.618.   Also, the price legs should possess clear symmetry with each drive forming over equivalent time periods. 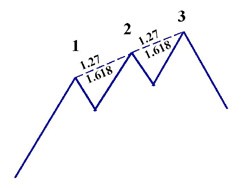 It offers a potential reversal point for a bullish market after forming three consecutive peaks. The pattern could be formed via two connecting bearish AB=CD patterns and also can shows a negative butterfly pattern when it is constructing the third drive.

The pattern defines the symmetry of the move using the projection of Fibonacci retracement. 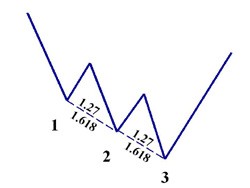 On the opposite side, the bullish three drives pattern offers a potential reversal point for a bearish market after forming three consecutive bottoms.