How to Start with Metatrader 5 - page 73

Why Traders Lose Money (based on dailyfx article)

While the title of this article can have broad implications with numerous explanations, we’re going to do our best to reduce the answer to this query to the most logical and basic explanation.

When a trader first gets started, it might be hard to imagine how getting control of losses can seem an impossible task. It may even feel like the cards are stacked against you… situations in which you’re right in your analysis, yet you still lose on the trade and watch capital disappear from your trading account.

So, a natural question is why some traders consistently make money while others lose, even when they’re right. That is what we will be investigating in this article.

The Difference between Trading and Analysis

Many new traders come to the market with a bias or point-of-view. Perhaps this is built from a background in economics, or finance, or maybe just a keen interest in politics. But one of the biggest mistakes a trader can make is harboring the expectation that ‘the market is wrong and prices have to come back.’

Is this to say that analysis is worthless? Absolutely not: It merely means that analysis is only a part of the equation of being a successful trader. Analysis is a way to potentially get the probabilities on the trader’s side, even if just a by a little bit; a way to maybe get a 51% or 52% chance of success as opposed to a straight-up coin flip.

Good analysis, whether it be fundamentally-driven or technically-driven, can be right a majority of the time. But no form of analysis will ever be right all of the time. And this is the reason that there is such a large chasm between analysis and trading.

In analysis, it doesn’t matter how wrong you are when you aren’t right. In trading, this matters quite a bit. Because even if you’re winning on 70% of your trades, if you’re losing $3 for every trade in which you’re wrong but only making $1 every time that you’re right, you’re still losing. It might feel good, because 70% of the time you’re walking away from your positions with the feeling of success; and as human beings this is something we generally strive for (to feel good).

The example below shows how bad risk management can destroy even a strong winning percentage of 70% success. 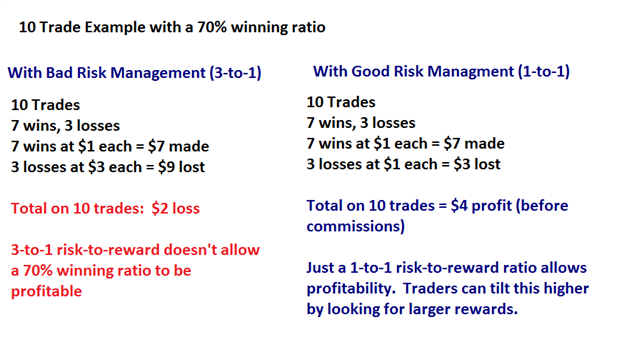 But logically, it doesn’t make sense to embark on this type of endeavor because the goal of trading is to make money; not necessarily to just ‘be right’ more than 50% of the time.

How to actually trade analysis

First thing first, traders need to crystallize what their actual goal is in trading in markets; and point-blank, that goal should be to make money.

After that, traders need to expect that they will, at times, be wrong.

So given these two facts, the next logical assumption is that without being able to control the damage from those instances in which we’re wrong, the prospect of profitability is a distant one.

So risk management isn’t just a preference or a style of trading: It’s a necessity for long-term profitability. Because even if you’re winning 90% of the time, the losses on the other 10% can far outstrip the gains that are made on the 90%.
I fully realize this isn’t necessarily exciting information. When I teach risk management, rarely do a see a student-trader ready to burst out of their seats to go and manage some risk. Most people want to hear about entry strategies, and analytical methods to try to get those odds of success tilted even higher in their favors.

But until a trader learns to manage their risk, much of this additional work is a moot point. Because as long as the risk exists that one bad position can and will wipe away the gain from many other ‘good’ positions; that trader is going to struggle to find profitability.

So, to properly trade analysis one needs to first observe proper risk management. Because trading isn’t just ‘guessing’ and ‘hoping’ that we get it right. Profitable trading is implementing analysis while properly managing risk factors; implementing a defensive approach so that when one is wrong, the losses can be mitigated and when one is right, profits can be maximized.


How can one begin to use ‘proper’ risk management?

The solution is simple; implementing it not as much. As human beings, we often follow our gut instincts or our ‘feelings.’ But in trading, we have to keep the bigger picture in mind. When we place a trade, we often try to win on that one trade. This can keep traders holding on to losers for far too long, and closing out winners way too quickly.

That question has been asked numerous time, please do some search before posting : MQL5.com Search - Quick, Easy and Convenient!

Contact your Broker,  not all Brokers offer signals on MT4

How can I enable Terminal in MetaTrader4 Frequently Asked Questions about

More and more brokers choose MetaTrader 5 as the primary platform for providing services to their traders. Alpari has noted significant growth on the number of new trading accounts. Representatives of RoboForex have also reported a steep increase in the number of accounts opened through the MetaTrader 5 platform. Furthermore, a growing number of traders on Moscow Exchange tend to choose the new platform and switch to MetaTrader 5 brokers.

At the same time, brokers and platform developers have recorded an increase in the number of requests for technical support from traders who are actively exploring the new platform capabilities. For this reason, MetaQuotes Software has prepared a series of MetaTrader 5 video guides for both brokers and their technical support teams.

These five-minute videos aim to familiarize traders with all analytical and trading features of the platform. The videos provide general information on all basic features, as well as explanation on additional services, including the Market of trading robots, the Trading Signals service, Virtual Hosting and the Freelance resources. For convenience, the videos contain links to detailed video tutorials of other platform components.

"We can handle the increased load from traders and brokers," said Gaies Chreis, COO of MetaQuotes Software Corp. "We expect an intensified influx of clients, and we are preparing new efficient solutions to serve traders. For example, now we are looking to integrate video tutorials straight into the platform. This can provide traders with quick access to assistance and reduce the load on brokers' internal help desk."

The new videos with professional English and Russian voice over are available on the MetaQuotes' official YouTube Channel. The videos are also available with subtitles in 8 languages: Arabic, Chinese, French, German, Japanese, Portuguese, Spanish, and Turkish.

Watch the short video and discover the new features of MetaTrader 5 in five minutes!

Last Friday, the new MetaTrader 5 trading platform build 1375 with the Time & Sales option was officially released. The Time & Sales feature in the Market Depth window enables users to view the real-time list of all exchange transactions.

The Time & Sales list provides in-depth trading data, including records on time, direction, price and volume of each transaction. Trade volumes are displayed as a histogram, with a color coding of different trade directions: 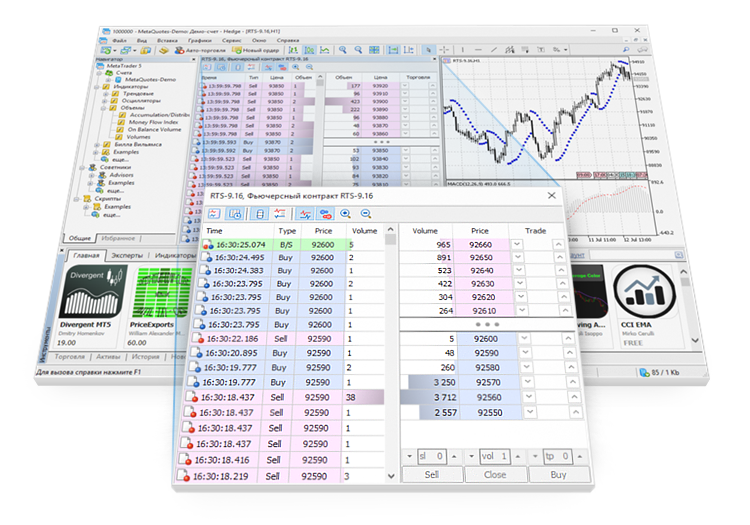 Time & Sales provide a detailed view of trading activity on various price levels. An increasing activity of buyers and sellers can indicate the upcoming rise or fall in security prices. Trade volumes and frequency can provide an indication of the current market sentiment and emphasize the importance of individual price levels. Although the Time & Sales option is primarily used by intraday traders, it also provides useful data for long-term traders who prefer to hold their positions open for a few days. In addition to the visual analysis of Time & Sales, the featured data can be exported to a CSV file for further analysis using third-party applications, such as MS Excel.

If you want to evaluate the new functionality, open a demo account with MetaQuotes-Demo and updated your MetaTrader 5. Your broker's platform should be updated to version 1375, in order to enable proper operation of Time & Sales on live accounts.

Good luck.
Something Interesting Is there an EA Automating binary options using

Contents
Something Interesting All (not yet) about Where Do I start

All your texts in Forum, Articles and Code Base are edited in a single environment with a convenient and easy-to-use interface. Let us take a look at its capabilities.

The secret of the SnD + Fibonacci for Signals : Ask &

Summary - All about Strategy Tester, Optimization and Cloud