What to expect from major currency pairs in the New year.

There is no doubt that the vast majority of brokerage companies and private traders consider the EUR/USD pair as one of the main tools for their work. Different sources say that this pair holds from 22% to 32% of the Forex market. It is followed by USD/JPY, GBP/USD, AUD/USD, USD/CHF, USD/CAD, EUR/JPY and EUR/GBP.

All these currencies, primarily the dollar and the euro, are more or less correlated with the main macroeconomic indicators and political events, which is a disadvantage from the point of view of   technical analysis fans and, conversely, an advantage according to the apologists of fundamental analysis. In the first case, just one Twitter post by the US President breaks through the most powerful support/resistance zones, reverses channels and trends, drives indicators crazy and turns Elliott waves into small splashes. In the second case, macroeconomic statistics allow, without breaking heads over graphical figures and candlestick analysis, to give fairly accurate long-term forecasts. For example, forecasts for the next 12 months.

So, what, according to experts, awaits us in the coming year?

Analysts at Deutsche Bank, Goldman Sachs, Bank of New York Mellon and a number of other banks reach consensus, predicting a fall in the US dollar in 2020. The main reason for this will be a slowdown in global economic growth, which will increase the demand for riskier assets. Especially so since the US Federal Reserve, on the eve of the presidential election, under pressure from Donald Trump, is likely to continue to reduce interest rates, or at least keep them at the existing level.

Financial Times writes that, according to Citigroup experts, the policy of quantitative easing (QE), conducted by the Federal Reserve, and pumping the market with cheap dollar liquidity can become a catalyst for the dollar depreciation. Analysts of the Swiss Bank Lombard Odier, as well as one of the world largest investment companies, BlackRock, who expect a moderate decline in the dollar in the next six months, agree with their colleagues from Citigroup.

JPMorgan Chase experts predict the level of 1.14 for the EUR/USD pair at the end of 2020. Goldman Sachs and Bank of America Merrill Lynch call 1.15. And German Deutsche Bank and French Societe Generale forecasts for the dollar are even more gloomy: they believe that the euro will trade at $1.20 in a year.

According to Bloomberg, the consensus forecast of the largest market operators suggests that by the end of 2020, the US dollar will "lose weight" by another 400-500 points, and the EUR/USD pair will rise to the 1.16 zone.

Conspiracy theorists, of course, suspect market manipulation and talk about the fact that bankers want to buy dollar liquidity at the lowest prices, for which they spread "bearish" forecasts.  And here it is appropriate to recall the words of Andreas Koenig, head of Global FX in the multinational investment company Amundi Asset Management, that he had heard many times before about the fall of the dollar against the euro, and every time the opposite happened. "I would be very surprised if this consensus came to fruition," he said.

"It is true that the Fed's interest rate of 1.75% is small," says John Gordon, a leading analyst at brokerage NordFX, "but other regulators have zero or negative interest rates at all. Despite rate cuts, trade wars and other problems, the dollar has risen against the euro by more than 10% since February 2018. And if you look back at the past year results, it is clear that for many investors, due to the weakness of the European economy and the problems with Brexit, the dollar has become a safe haven currency. And for Central Banks, it remains the main reserve currency, far ahead of any other assets." 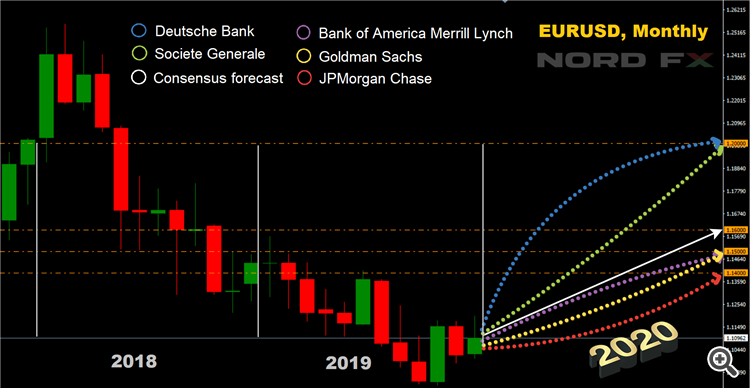 As for other currencies, Goldman Sachs predicts that the exchange rate of the British pound to the dollar by the end of 2020 will reach 1.37.

Bank of America Merrill Lynch also believes that not only the euro, but, first of all, the pound should benefit from resolving the uncertainty with Brexit, resulting in the GBP/USD pair rising to the horizon of 1.39. The falling dollar will also support emerging markets, strengthening the currencies of the countries belonging to the Association of Southeast Asian Nations (ASEAN), and the quotes of the USD/JPY pair will fall to 103 yen per dollar.

The Canadian and New Zealand dollars will continue to attract interest, and the price of gold will go up.

Leap year 2020 is 12 months, 366 days, and during these days a lot can happen that can disprove any forecasts. The dollar will depend on the domestic situation in the United States, and on what is happening in global markets, not only in America, but also in Europe and Asia. "I think a full-scale USA deal with China will change the rules of the game... It will change everything!"- predicts David Bloom, global FX strategist at HSBC.

Will it change anything? It is not long that is left to find out the answer to this question. In the meantime:
Patience, good luck and fulfillment of the most cherished wishes to you!

Notice: These materials should not be deemed a recommendation for investment or guidance for working on financial markets: they are for informative purposes only.   Trading in financial markets is risky and can result in a complete loss of deposited funds.

Just revealed, how to determine the reversal point more effectively based on MCS

The EUR Downtrend is over