The market price is formed out of a stable balance between demand and supply which, in turn, depend on a variety of economic, political and psychological factors that are difficult to be directly considered due to differences in nature as well as causes of their influence.

It is however necessary to be able to foresee and predict the future market price behavior with a certain degree of accuracy in order to be capable of making right decisions regarding the purchase or sale of goods, including currency or shares, in the current situation. This problem can be solved using a considerable amount of information of different nature from all sorts of sources that is processed in one way or another.

There are 4 types of analysis /1/ that are used for development of an effective strategy and tactics of the market behavior depending on purpose, qualification or predisposition of the researcher:


State of Knowledge Regarding the Problem

Any technique, including a new newly proposed method for market price prediction, should in our opinion consider and, in a lucky combination of circumstances, explain the objectively existing laws based on three axioms known as the Dow Theory /6,7/ which can be briefly formulated, as follows:

However dynamical rest stages of the market price time series, e.g. currency rates, are followed by stages which are so complex that one gets an impression of complete unpredictable chaos which in the process of self-organization gives rise to the order again.

But at a certain point, the dynamical system weakened by stability again produces chaos which gives us grounds to believe that the nature of economic indicator time series is mixed. This means that the market price time series are deterministic and analyzable at one point but cannot be reliably predicted at another point and follow the normal distribution law /8/ and act as a random variable at yet another point.

Thus the scientific world as yet lacks a common opinion regarding the nature of changes in the market price which prevents us from finding the dependencies that would adequately define them and be applicable in practice.

Due to fuzziness of the process I suggest that we first take a look at a black box single-cell model which is sometimes attributed to the problem in question /1/ and apply the material balance equation.

Elaborating on the above axioms, let us assume that the equilibrium market price can only change when affected by an external force D(t) the amount and value of which will be measured in the same dimension as the price.

We also assume that the change in the market price P(t) in the course of time t from the beginning of impact of the specified force is continuously increasing from zero value in accordance with some law which is as yet unknown trying to reach a value of P(∞) = D0 at infinity. In other words, D0 will mean a finite increment or decrement of the market price depending on the nature and sign of the affecting force.

It is also implied that D(t=0) = D0. We further assume that in the course of infinitesimal period of time dt, the affecting force will decrease by the value of dD(t) in proportion to the force D(t) remaining by the time t:

whence we get the exponential dependence D(t) on time t, as follows:

t is the time from the beginning of impact of the destabilizing force in units of the time series, sec. (min, hrs, days, weeks, decades, months, years);

Let us now assume that the market price P(t) change velocity V(t) is proportional to both the value of D(t) and time t:

k is the factor of proportionality that has dimension 1/(time)^2;

β = k*τ*D0 is the factor of proportionality that has the dimension of the market price change velocity.

The absolute increment or decrement of the price per unit of time by the given time t which is expressed as H(t) is numerically equal to V(t):

Undoubtedly, by integrating H(t) throughout the whole range of the time t change, we shall get a total value of the change in the market price P(t) by the time t from the beginning of its destabilization:

When comparing the previous notation of β with the result we have received, we conclude that:

Now the following relations are true:

Consequently, if τ and β coefficients are determined, it is possible to estimate and predict the price change limit value D0 at any stage of the price change, including the early stage. However these statements will only be true when the material balance condition is fulfilled:

Therefore the normalization requirement shall be met:

Precise fulfillment of the material balance condition (4) and satisfaction of the normalization requirement (5) indicate that the assumptions we made and the proposed relations are true.

Transient Functions for a Multiple-Cell Model

Reasoning in a similar manner regarding a black box multiple-cell model consisting of n cells, we get the following relations for D(t), H(t) and P(t) functions:

The integration (8) can prove that:

Consequently, according to (6-8) the normalization requirement is met precisely in this case, too:

Dependence of the market price level P(h) on time t from the beginning of observations will be expressed, as follows:

In a single-cell model:

Parameters n and τ as well as β coefficient are determined using the actual market price values from the beginning of its destabilization in the market, whereby one analyzes changes in the market price f per unit of time t which can be taken as the value of the derivative of (10b). It can be seen that the error of accepting this assumption is negligibly small being a few hundredth of a percent of the price change value. Acceptance of this assumption greatly facilitates the process of determining the above parameters and β coefficient.

From analyzing S function we can now actually proceed to the analysis of M function:

Dividing both parts of (11) by t^n and taking the logarithm of the obtained relation, we get an equation of a straight line in semi-logarithmic coordinates:

Now, if values of the function f to the corresponding points of time t are known, the parameters n and τ as well as β coefficient can be determined, as follows: 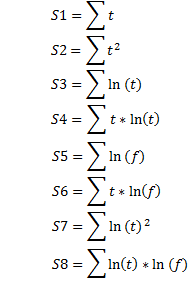 The values of the function f to the corresponding points of time t as well as the time t are determined based on the actual market price values Р0, Р1,…, Рк by the points of time һ0, һ1,…, һк from the beginning of the market price destabilization by means of numerical differentiation and integration at the middle of the interval:

Practical testing of (10a) and (10b) equations as a regression model when using the actual data has shown that Р(0) and D0 values should be corrected, as follows:

where: Sf and Sr are areas of actual and theoretical curves, respectively;

k>2 is the number of time intervals for which the price variance is determined;

b is the coefficient of linear regression equation

that determines the trend direction of the actual data.

Now, the regression equation (10b) for prediction of the market price P(t) takes the final form, as follows:

It has turned out that the market price values P(t) calculated in this manner and the actual price values Pf as provided in the Forex market example below, always entirely and precisely fulfill the material balance condition:

The fact that the sums of actual and theoretical values of the parameter under study, particularly the market price, are absolute, exact matches at any argument value, in particular the time, proves that the calculations, transformations and assumptions accepted at the function output are correct, and is indicative of universality of the proposed regression model.

The picture below shows the results of the Forex market actual data processing (1-minute time frame) in a specified way using equation (18) where one can note a satisfactory correspondence between the actual values (Pf) (yellow line with red dots), theoretical and prediction values (P1) (blue line) and actual future values that were not taken into account for calculation purposes (Pff) (blue line with red dots) of the EUR/USD quotes. 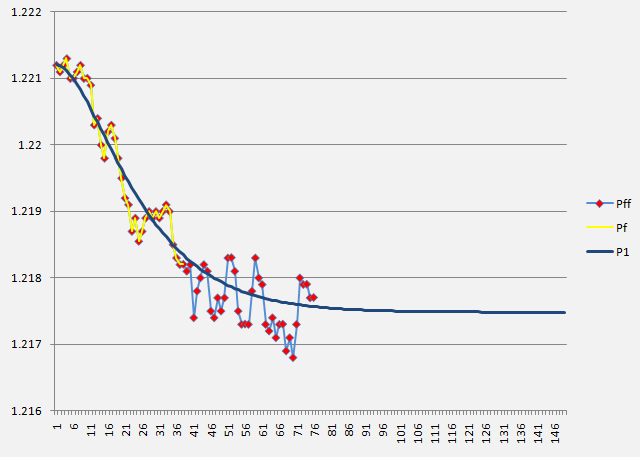 We have identified and proposed three functions that describe three dynamic transients, respectively, which are defined as various modifications of the Gamma distribution function determining the behavior of the parameter under study, particularly the market price, depending on the time in the future, present and past from the beginning of its destabilization.

Following the analysis of the specified processes, the universal regression model for the market price prediction was brought forward; it can serve as the basis for development of, e.g. market indicators for various purposes, Expert Advisors optimizing the traders' activity, automated trading systems and may even give rise to development of a trading robot - ROBOTRADER trading on its own for the benefit of a person.

P.S. All relations and formulas as well as the main assumptions and conclusions in this article have been ascertained, elaborated, introduced and made public in the open press for the first time.

TipMyPip | 27 May 2013 at 12:23
Outstanding !!! Thank you very much for contributing your knowledge, and having a big heart to improve our trading.

Analysis of the Main Characteristics of Time Series
This article introduces a class designed to give a quick preliminary estimate of characteristics of various time series. As this takes place, statistical parameters and autocorrelation function are estimated, a spectral estimation of time series is carried out and a histogram is built.

Custom Graphical Controls. Part 3. Forms
This is the last of the three articles devoted to graphical controls. It covers the creation of the main graphical interface component - the form - and its use in combination with other controls. In addition to the form classes, CFrame, CButton, CLabel classes have been added to the control library.