A marked rebound in the U.K.’s Consumer Price Index (CPI) may pave the way for fresh highs in the GBP/USD as it puts increased pressure on the Bank of England (BoE) to normalize monetary policy sooner rather than later.

Indeed, the BoE Minutes may reveal a growing dissent within the Monetary Policy Committee (MPC) as U.K. officials anticipate a stronger recovery in 2014, and heightening price pressures may boost the bullish sentiment surrounding the British Pound as it spurs a more material shift in the policy outlook.

The ongoing pickup in household sentiment along with the resilience in retail sales may push U.K. firms to ramp up consumer prices, and a sharp uptick in the headline reading for inflation should foster a bullish reaction in the GBP/USD as it fuels interest rate expectations.

Nevertheless, efforts to cool the house paired with the persistent slack in the real economy may continue to dampen the outlook for price growth, and a dismal CPI print may generate a larger correction in the GBP/USD as market participants scale back bets of seeing higher borrowing costs ahead of schedule. 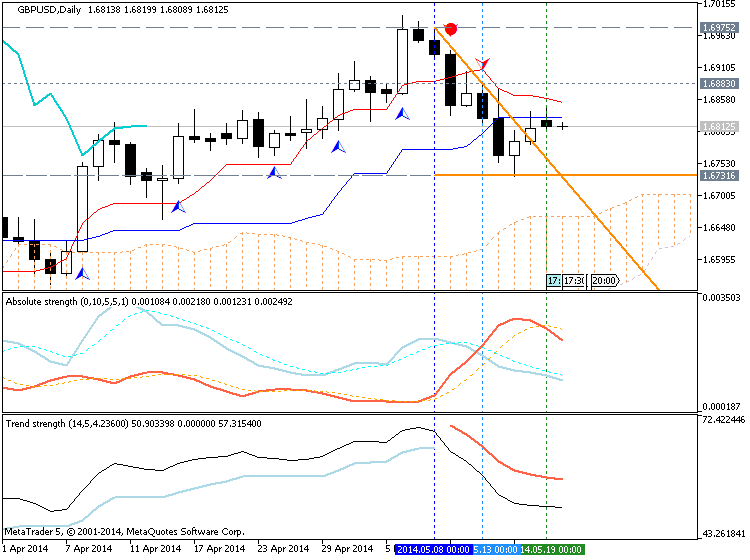 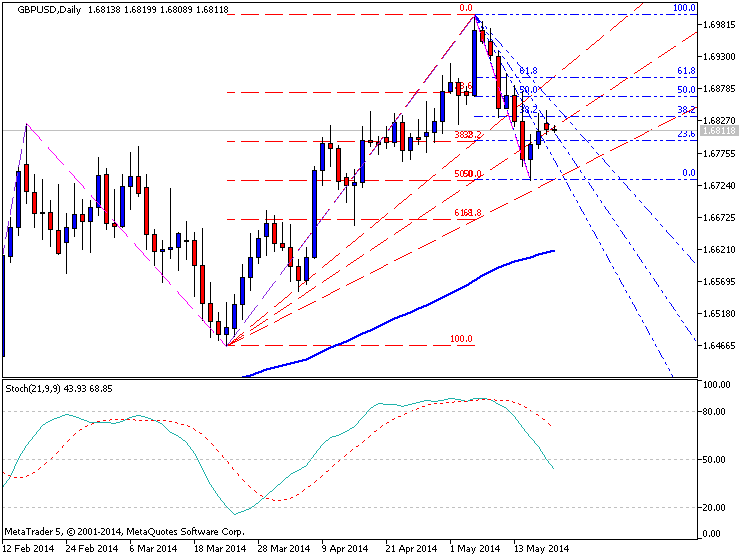 Impact that the U.K. CPI report has had on GBP during the last release 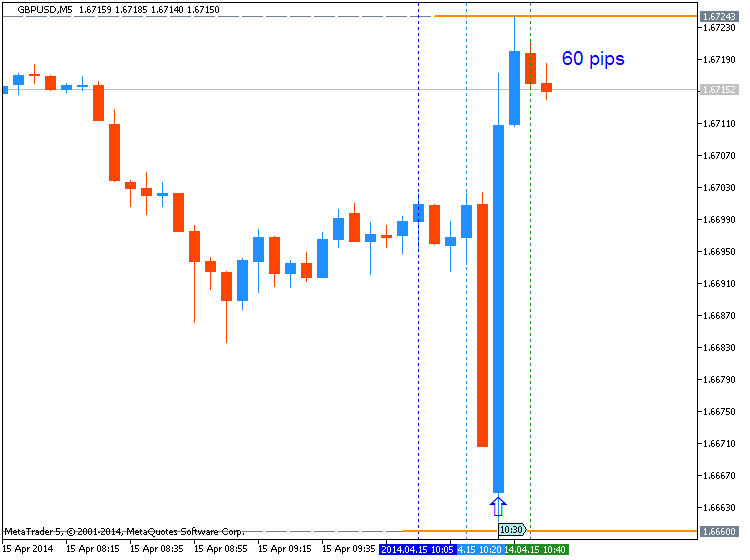 U.K. consumer prices increased an annualized 1.6% in March after expanding 1.7% the month prior, while the core rate of inflation grew 1.6% during the same period to match the slowest pace of growth for 2014. Despite the slowdown, the in-line CPI prints pushed the GBP/USD back above the 1.7000, with the pair ending the day at 1.6723.

JPY BOJ Press Conference = It's among the primary methods the BOJ uses to communicate with investors regarding monetary policy. It covers the factors that affected the most recent interest rate decision, the overall economic outlook, inflation, and clues regarding future monetary policy

Yep, the lad’s still at it

The Bank of England Minutes may generate a more meaningful advance in the GBP/USD should we see a growing number of central bank officials show a greater willingness to normalize monetary policy sooner rather than later.

The policy statement may show a growing dissent within the BoE as the fundamental developments coming out of the U.K. raise the prospects for a stronger recovery, and the fresh batch of central bank rhetoric may pave the way for fresh highs in the GBP/USD should the committee adopt a more hawkish tone for monetary policy.

Sticky price pressures paired with the ongoing pickup in private sector activity may put increased pressure on the BoE to raise the benchmark interest rate ahead of schedule, and the GBP/USD may continue to carve higher highs & higher lows in the second-half of the year as the central bank moves away from its easing cycle.

However, the persistent slack in the real economy may keep the BoE on the sidelines as Governor Mark Carney retains a cautious outlook for the region, and the GBP/USD may face a larger correction in the days ahead should the policy statement drag on interest rate expectations. 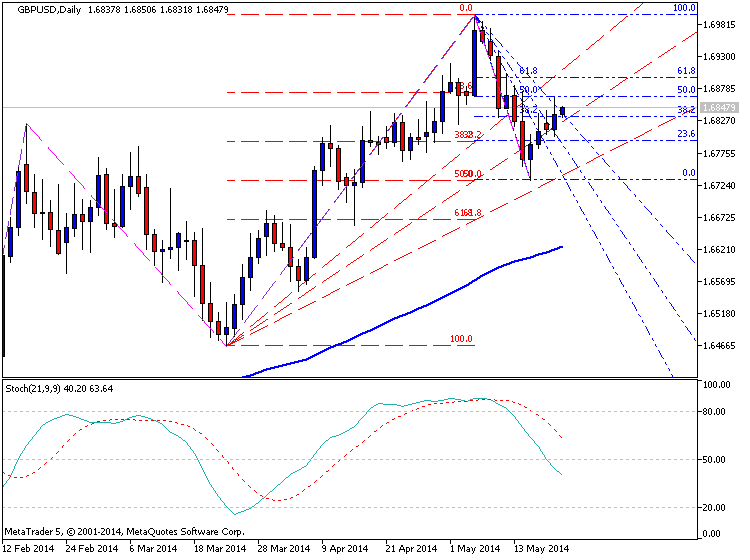 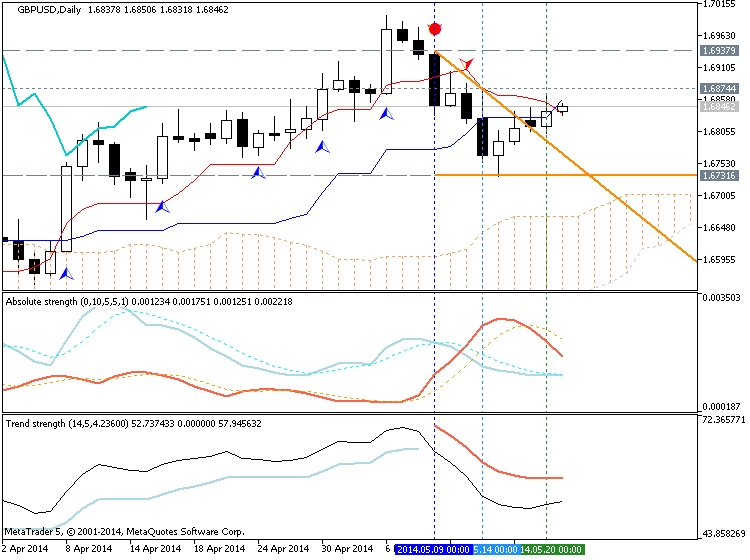 The BoE voted unanimously to retain its current policy in April as the central bank sees a stronger recovery in 2014, but the British Pound failed to benefit from the meeting minutes as the MPC talked down the threat for inflation. In turn, the GBP/USD slipped back below the 1.6800 handle, with the pair trailing lower throughout the North American trade to end the day at 1.6779.

U.K. consumers were the driving force behind Britain’s economic growth at the start of the year, continuing a trend after they led the recovery in 2013.

Britain’s recovery over the past year has left GDP just 0.6 percent below where it was at its peak in the first quarter of 2008. The improving economy was underscored by data yesterday showing a faster than forecast increase in retail sales in April.

The brighter outlook is also having an impact within the Bank of England, where some policy makers are moving closer to calling for an interest-rate increase. Minutes of the Monetary Policy Committee’s most recent meeting, published yesterday, showed the argument for higher rates is becoming “more balanced” for some of the panel.

While the outlook is improving and data indicates a squeeze on consumers is easing, Prime Minister David Cameron’s Conservative Party trails the opposition Labour party in polls. The Tories are expected to come third behind Labour and UKIP in European elections being held today.

First-quarter production growth was revised down to 0.7 percent from 0.8 percent in the initial GDP release. Growth in services, the largest part of the economy, was unchanged at 0.9 percent, and construction growth was raised to 0.6 percent from 0.3 percent. From a year earlier, the economy grew 3.1 percent, the ONS said, unrevised from the initial estimate. That’s the biggest annual increase since the fourth quarter of 2007. 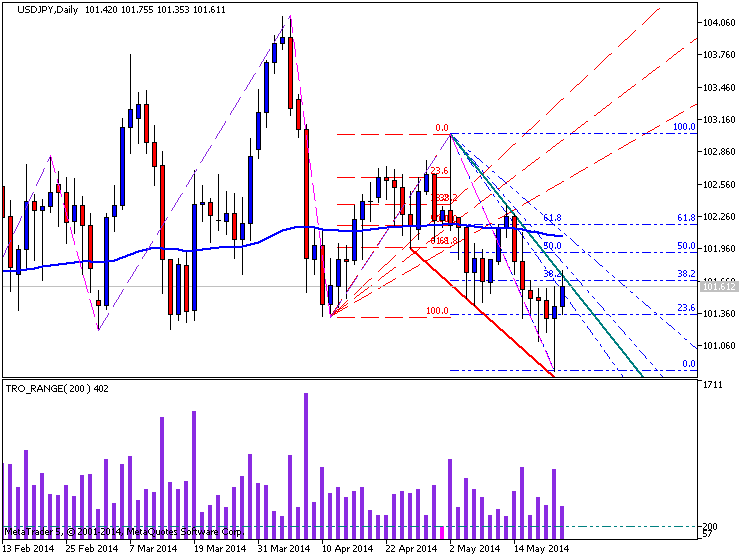 AUD - Private Capital Expenditure = Change in the total inflation-adjusted value of new capital expenditures made by private businesses. It's a leading indicator of economic health - businesses are quickly affected by market conditions, and changes in their investment levels can be an early signal of future economic activity such as hiring, spending, and earnings

Total new capital expenditure in Australia was down a seasonally adjusted 4.2 percent on quarter in the first quarter of 2014, the Australian Bureau of Statistics said on Thursday - coming in at A$37.076 billion.

That missed forecasts for a decline of 1.9 percent following the 5.2 percent drop in the fourth quarter.

On a yearly basis, total new capital expenditures were down 5.0 percent.

Capex for buildings and structures tumbled 7.4 percent on quarter and 2.5 percent on year to A$24.524 billion.

Capex for equipment, plant and machinery added 2.8 percent on quarter but dropped 9.6 percent on year to A$12.552 billion.

Canada’s 1Q GDP report may spur a meaningful rebound in the USD/CAD should we see a marked slowdown in the growth rate.

A dismal GDP report may instill a bearish outlook for the Canadian dollar as Bank of Canada (BoC) Governor Stephen Poloz keeps the door open to further reduce the benchmark interest rate, and the central bank head may continue to endorse a dovish outlook for monetary policy amid the persistent slack in the real economy.

The slowdown in private sector consumption along with the ongoing weakness in the labor market may spur a lackluster GDP print, and a dismal development may spur a bullish breakout in the USD/CAD as it raises bets for a BoC rate cut.
Nevertheless, the ongoing expansion in the housing market paired with the rebound in building activity may produce another GDP reading above 2.0%, and a better-than-expected print may generate a further decline in the USD/CAD as the pair remains the bearish trend carried over from March. 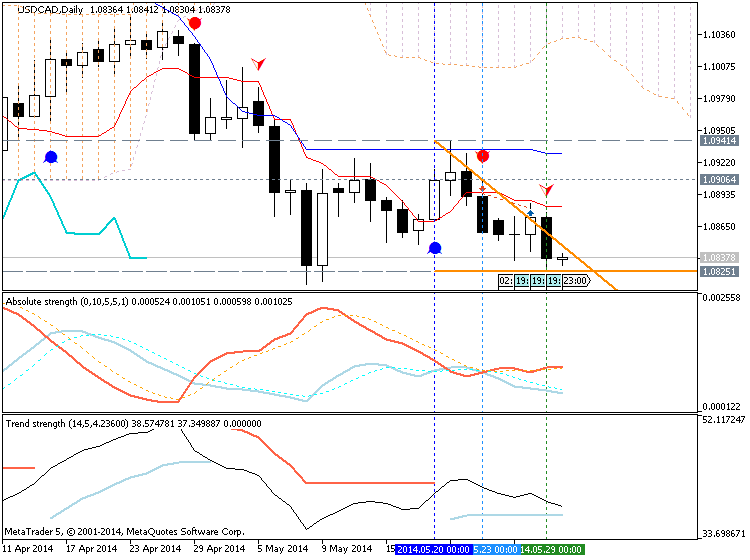 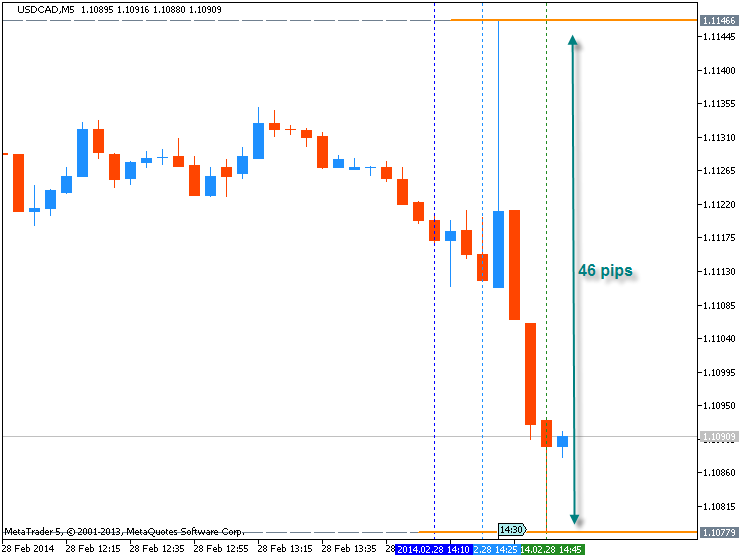 The Canadian economy grew at a faster pace during the last three-months of 2013, with the growth rising another 2.9% following the 2.7% advance in the third-quarter, and the data print may encourage an improved outlook for the Canadian dollar as it raises the outlook for growth and inflation. The USD/CAD slipped back below the 1.1100 handle following the stronger-than-expected GDP print, with the pair ending the day at 1.1064

Federal Reserve Bank of Chicago President Charles Evans provided his perspective on monetary policy at a macroeconomics workshop in Turkey.

if actual > forecast = good for currency (for CNY in our case)

[CNY - HSBC Services PMI] = Level of a diffusion index based on surveyed purchasing managers in the services industry. It's a leading indicator of economic health - businesses react quickly to market conditions, and their purchasing managers hold perhaps the most current and relevant insight into the company's view of the economy

China Services PMI Slides To 50.7 In May- HSBC

Activity in China's services sectors continued to expand in May, albeit at a slower pace, the latest survey from HSBC and Markit Economics revealed on Thursday.

A reading above 50 signals expansion in a sector, while a score below means contraction.