If actual > forecast = good for currency (for GBP in our case)

The U.K. economy expanded at a faster pace as expected in the second quarter on a widespread support from production, construction and services.

The increase in gross domestic product doubled to 0.6 percent from 0.3 percent in the first quarter, preliminary estimate published by the Office for National Statistics showed Thursday. The growth rate matched expectations.

As expected, GDP was 1.4 percent higher in the second quarter compared with a year ago.

The largest contribution to GDP growth came from services, which expanded 0.6 percent sequentially. Further, construction output grew 0.9 percent, recovering from a 1.8 percent fall in the first quarter, when output was at its lowest level since the start of 2001.

I opened 2 pending orders (buy stop and sell stop) using just mouse on the chart, moved those orders to be a little closer to support/resistance lines (those lines are drawing by this indicator) ... and wait ...sell stop order was executed, I placed stop loss and take profit, and the trade was closed in profit with 27 pips (4 digit pips).

I think - I closed this sell trade for GBPUSD too early - see the image : 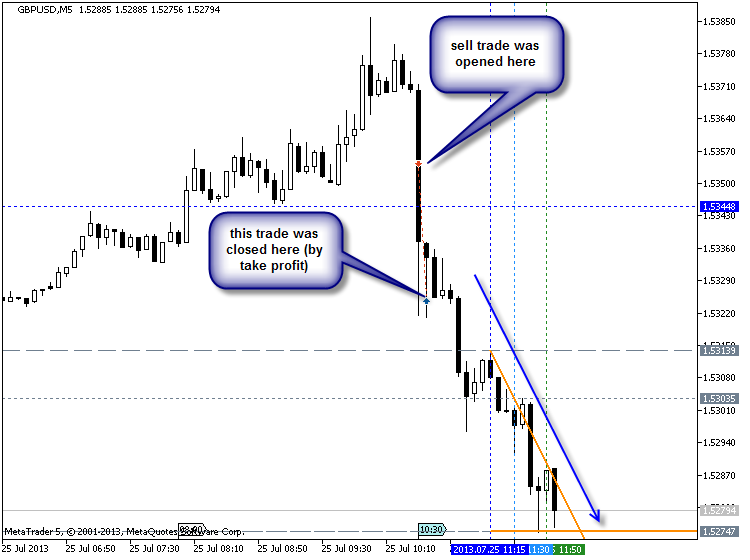 This is interesting situation will be going on the next week - just see the image : 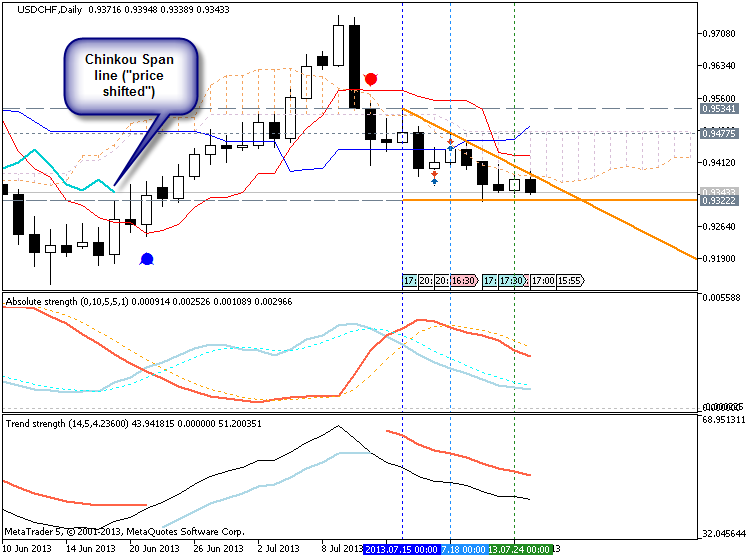 If this Chinkou Span line (see image; this is one of the lines in standard Ichimoku indicator in Metatrader 5) will cross historical price (from above to below) so we will have good breakdown (gowntrend) for USDCHF for the next week.

The similar but opposite situation is for EURUSD D1: if this Chinkou Span line will cross historical price from below to above so we will get good mobement for this pair - good uptrend :

If actual > forecast = good for currency (for JPY in our case)

Basicly - there are many CPI news events coming on the same time for JPY. But high impacted events are core and monthly. I mean:

But as those JPY CPI news events are coming on the same time and as there are many of them (National CPI yearly and monthly, Tokyo CPI yearly and monthly, and core value of those CPI's) so any economic calendar is estimating just 1 or 2 of them. Of course, USDJPY price is moved according to the values of all JPY CPI's value. So, just some press releases about JPY CPI (read below).

Core consumer prices in Japan spiked 0.4 percent on year in June, the Ministry of Internal Affairs and Communications said on Friday - marking the fastest annual increase since November.

The data also sparks hope that the country may finally be starting to pull out of the deflationary spiral in which it has been trapped for more than a decade.

The numbers likely are in response to the aggressive policy measures that Prime Minister Shinzo Abe and the Bank of Japan have put into place. The BoJ has set a target of 2 percent inflation in two years.

The headline figure beat forecasts for an increase of 0.3 percent on year following the flat annual reading in May.

Overall inflation was up 0.2 percent on year, also topping expectations for a 0.1 percent increase following the 0.3 percent contraction in the previous month.

Both overall CPI and core inflation were flat on month after adding 0.1 percent and 0.2 percent on month, respectively, in May.

By category, prices for fuel climbed 1.0 percent on month, while medical care costs were up 0.1 percent.

Furniture prices were down 0.4 percent and recreation costs dipped 0.3 percent.

Core inflation for the Tokyo region - considered a leading indicator for the nationwide trend - was up 0.3 percent on year in July. That was in line with expectations and up from 0.2 in June.

By category, prices for fuel spiked 9.0 percent on year, followed by communications (1.2 percent) and education (0.3 percent).

The gains were offset by furniture costs, which lost 2.5 percent on year, while recreation costs lost 1.0 percent, medical care was down 0.8 percent and housing dipped 0.7 percent.

On month, core CPI in Tokyo was flat, while overall inflation added 0.2 percent.

By category, fuel costs were up 1.1 percent on month, while costs for communications and food were up 0.8 percent apiece.

If actual > forecast = good for currency (for USD in our case)

Consumer sentiment in the U.S. improved to its best level in six years in the month of July, according to a report released by Thomson Reuters and the University of Michigan on Friday.

With the upward revision, the index is above the final June reading of 84.1 and at its highest level since July of 2007.

The monthly increase by the headline index reflected an improvement in the assessment of current economic conditions, which jumped to 98.6 in July from 93.8 in June.

On the other hand, the report showed that the gauge of consumer expectations dipped to 76.5 in July from 77.8 in June.

"This high level of confidence points toward a continued expansion of consumer spending in the year ahead," survey director Richard Curtin said, according to Reuters.

And this is the statement for trading news events for this week (see attached) :

If actual > forecast = good for currency (for AUD in our case)

The number of dwelling units approved in Australia in June declined unexpectedly, the latest figures from the Australian Bureau of Statistics showed Tuesday.

Building approvals fell a seasonally adjusted 6.9 percent month-on-month in June compared with forecast of a 2 percent increase. The number of approvals declined 4.3 percent in May.

On an annual basis, building consents contracted 13 percent. The number of approvals totaled 12,778 during the month.

Approvals for private sector dwellings, excluding houses, declined 12.6 percent month-on-month to 4,543. This was 37.4 percent lower than a year earlier

Spanish recession eased further in the second quarter of 2013, a preliminary report from the statistical office Ine suggested Tuesday.

The gross domestic product contracted 0.1 percent quarter-on-quarter in the second quarter of 2013, slower than a 0.5 percent fall in the first quarter.

The pace of contraction has now eased for a second consecutive quarter. The outcome was in line with economists' expectations.

Year-on-year, GDP fell 1.7 percent in the second quarter, slower than a 2 percent decline reported in the first quarter. Economists had forecast a 1.8 percent drop.

"This result was basically caused by a more negative contribution in the domestic demand, which was compensated partially by a positive contribution of the external demand," the statistical office said.

Another flash estimate from Ine today showed that the harmonized index of consumer prices rose 1.9 percent year-on-year in July as expected. The pace of increase was weaker than a 2.2 percent rise recorded in June.

The consumer price index increased 1.8 percent year-on-year in July, slower than 2.1 percent rise in June. On a monthly basis, the HICP fell 1.1 percent and the CPI decreased 0.5 percent, according to the flash estimate.