If actual > forecast = good for currency (for GBP in our case)

The number of mortgage or home loans collectively approved by members of the British Bankers Association (BBA). This figure is published monthly by the BBA, and is considered to be an important leading indicator about the state of the housing market in the United Kingdom.

The numbers of approvals for house purchase and remortgaging continued the upward trend seen since the turn of the year as assistance schemes for mortgage lending helped first-time buyers, the British Bankers' Association said Tuesday.

The total number of mortgages including house purchases, re-mortgage and other secured borrowing rose to 66,917 from 65,993 last month.

BBA statistics director, David Dooks said, "Second quarter GDP is expected to have strengthened and as economic conditions improve the banks are providing the finance to help growth."

"However, household savings, though still growing at 5 percent, seem to be slowing," said Dooks. 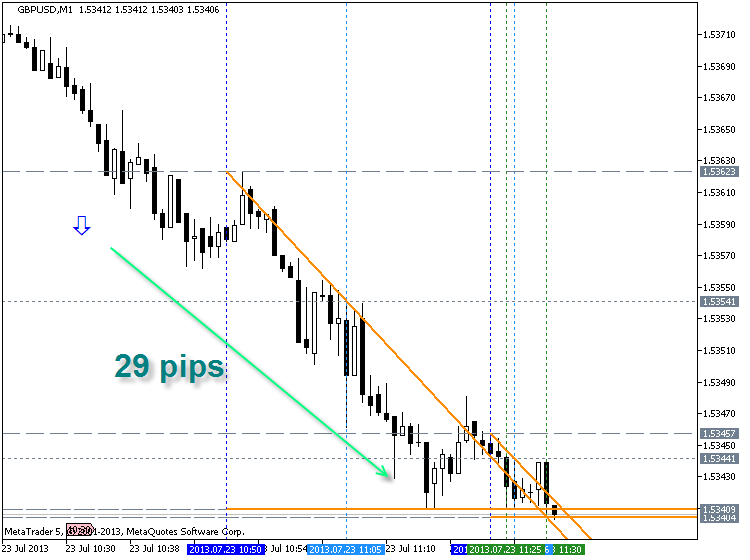 If actual > forecast = good for currency (for CAD in our case)

The Canadian dollar certainly has reasons to rise.

If actual > forecast = good for currency (for CNY in our case)

China's factory activity fell to the weakest level in eleven months in July amid a continued slide in new orders and faster destocking, preliminary results of a survey by Markit Economics and HSBC revealed Wednesday.

The purchasing managers' index, an indicator of the country's factory sector performance, fell to 47.7 in July from 48.2 in June. An index reading below 50 suggests deterioration in activity.

New orders received by manufacturers fell at a faster pace in July, while the pace of decline in export orders eased, the survey found. The manufacturing output index fell to a nine-month low of 48.2 in July from 48.6 in June.

Employment at manufacturers decreased at faster rate in July, the survey revealed.

The PMI reading suggested "a continuous slowdown in manufacturing sectors thanks to weaker new orders and faster destocking," said Hongbin Qu, Chief China Economist at HSBC. "This adds more pressure on the labour market," he said.

"As Beijing has recently stressed to secure the minimum level of growth required to ensure stable employment, the flash PMI reinforces the need to introduce additional fine-tuning measures to stabilise growth," Hongbin noted.

State media on Tuesday quoted Chinese Premier Li Keqiang as saying that the economy needs at least 7.5 percent growth to maintain labor market stability. In the remarks made at a recent State Council meeting, he said that 7 percent economic growth is the government's bottom line of tolerance.

Just about this news events :

The composite output index, that measures performance of both manufacturing and services, rose to a five-month high of 52.8 in July from 50.4 in June. Readings above 50 indicates expansion in activity.

The expansion was underpinned by a return to new business expansion in July, ending a four-month period of contraction, Markit said in the report. This improvement was driven by rising levels of domestic demand as new export volumes dropped for the fifth consecutive month.

The purchasing managers' index, a gauge of factory activity, rose to 50.3 in July from 48.6 in June. This was also the highest reading in five months and higher than economists' forecast of 49.2.

The services activity index advanced to 52.5 in July from 50.4 in June. This was above expectations of 50.7.

Both the manufacturing and service sectors posted only moderate increases in new business volumes during the latest survey period.

By the way, what I am uploading here as the pips - this is not a profit :) Those is the movement of the price based on some news events. Abotu trading the news event ... Just look at this image:

So, about 1 minute before news event release - place sell stop and buy stop orders based on support and resistance levels. How to know support/resistance levels? use this indicator : MaksiGen_Range_Move MTF - just attach it to M1 or M5 timeframe 5 or 10 minutes before the news. Look at the chart about - this is the profit. +20 pips (4 digit pips).

So, there are some differences between the following:

This is the other interesting situation - let's compare 2 news events on one pair: NZDUSD. The first one is the following:

If actual > forecast = good for currency (for NZD in our case)

The second news event is the following:

If actual > forecast = good for currency (for CNY in our case)

So, for now - we can compare those 2 news events (Trade Balance for New Zealand with manufacturing PMI in China) - related to the movement of NZDUSD price. We can see it from the image :

If actual > forecast = good for currency (for USD in our case)

New home sales in the U.S. rose by much more than anticipated in the month of June, according to a report released by the Commerce Department on Wednesday, although the report also showed downward revisions to the data for the past few months.

Economists had expected new home sales to climb to an annual rate of 481,000 from the 476,000 originally reported for the previous month.

With the continued upward trend, new home sales in June were at their highest annual since May of 2008. Sales were also up by 38.1 percent compared to the same month a year ago.

The number of houses for sale represents 3.9 months of supply at the current sales rate, down from 4.2 months due to the faster rate of sales. 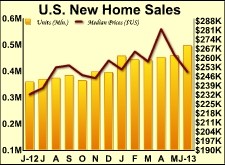 The report showed a notable increase in new home sales in the Northeast, where sales surged up by 18.5 percent in June.

On Monday, the National Association of Realtors released a separate report showing an unexpected decrease in existing home sales in June.

NAR said existing home sales dipped 1.2 percent to an annual rate of 5.08 million in June from a downwardly revised 5.14 million in May.

The drop surprised economists, who had expected existing home sales to climb to 5.27 million from the 5.18 million originally reported for the previous month.

Some more about NZD news event :

If actual > forecast = good for currency (for NZD in our case)

At the same time, he noted that the bank will keep the Official Cash Rate unchanged through the end of this year.

"The extent of the monetary policy response will depend largely on the degree to which the growing momentum in the housing market and construction sector spills over into inflation pressures," Wheeler said while announcing the bank's decision to hold the OCR unchanged at 2.5 percent.

"Although removal of monetary stimulus will likely be needed in the future, we expect to keep the OCR unchanged through the end of the year," Wheeler said.

He noted that the CPI inflation has been very low over the past year, reflecting the high New Zealand dollar and strong international and domestic competition. However, the bank expects inflation to trend upwards towards the mid-point of the 1-3 percent target band as growth accelerates over the coming year.

Wheeler said the Reserve Bank does not want to see financial or price stability compromised by housing demand getting too far ahead of the supply response.

In May, Wheeler signed a memorandum of understanding with Finance Minister Bill English, which awarded the central bank will more powers to curb excessive growth in credit and asset prices in the country through the use of four macro-prudential tools.

The tools included adjustments to the core funding ratio, a countercyclical capital buffer, adjustments to sectoral capital requirements and quantitative restrictions on the share of high loan-to-value ratio (LVR) loans to the residential property sector.

In addition to this, the central bank is expected to announce measures to limit low-deposit mortgage lending to cool the housing market.

Deputy Governor Grant Spencer said on June 27 that limited house supply was at the heart of the problem and strong demand supported by easy credit was underpinning the rapid escalation of house prices.

However, he said housing cannot yet be described as a threat to overall inflation, given some slack still in the economy. Nonetheless, Spencer opined that higher interest rates are not the right policy response at this time and that the bank is seriously considering the use of macro-prudential policy tools.


By the way, what I am uploading here as the pips - this is not a profit :) Those is the movement of the price based on some news events. Abotu trading the news event ... Just look at this image:

So, about 1 minute before news event release - place sell stop and buy stop orders based on support and resistance levels. How to know support/resistance levels? use this indicator : MaksiGen_Range_Move MTF - just attach it to M1 or M5 timeframe 5 or 10 minutes before the news. Look at the chart about - this is the profit. +20 pips (4 digit pips).

So, there are some differences between the following:

And this is about how to trade this news event - see the image :