USD/JPY -  daily bullish continuation with 114.36 target (based on the article)

Daily price broke Ichimoku clud to above for the reversal of the price movement from the primary bearish to the primary bullish market condition. For now, the price is breaking 113.68 resistance level together with ascending triangle pattern to above for the bullish trend to be continuing with 114.36 nearest daily target to re-enter. 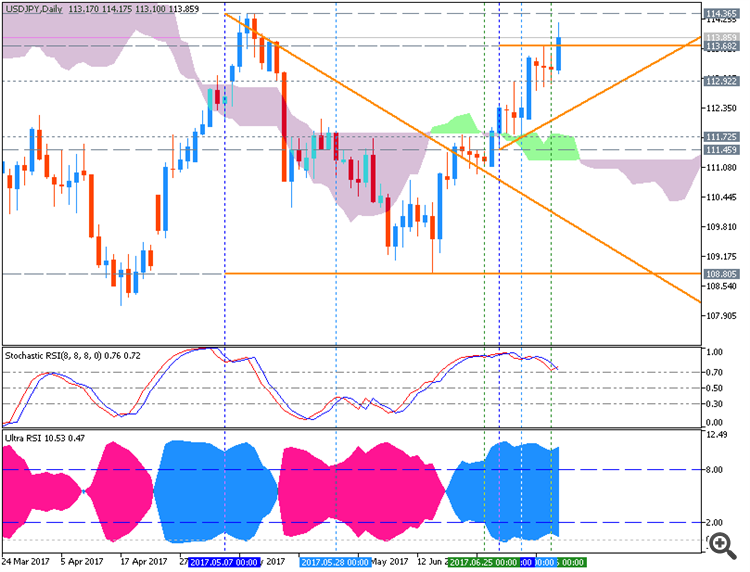 USD/JPY Price Analysis: Break Above 114 Favors Further Upside
and emphasize their Yield Curve Control (YCC) approach to monetary policy. However, there were no tenders, which could mean we’ll see further JGB flattening in the near term as as other central banks (we’re looking at you ECB & BoC) are actively disengaging from their prior dovish stances, which could lead to persistent upside in EUR/JPY and...
Forecast and levels for Forecast for Q2'16 - Forecast for Q1'17 -

General Electric‘s (NYSE: GE) - daily bearish breakdown; 26 level is the key (based on the article)

Daily price is on berish breakdown to be located below Ichimoku cloud in the bearish area of the chart. The price is breaking 26.10 support level to below for the bearish trend to be continuing. 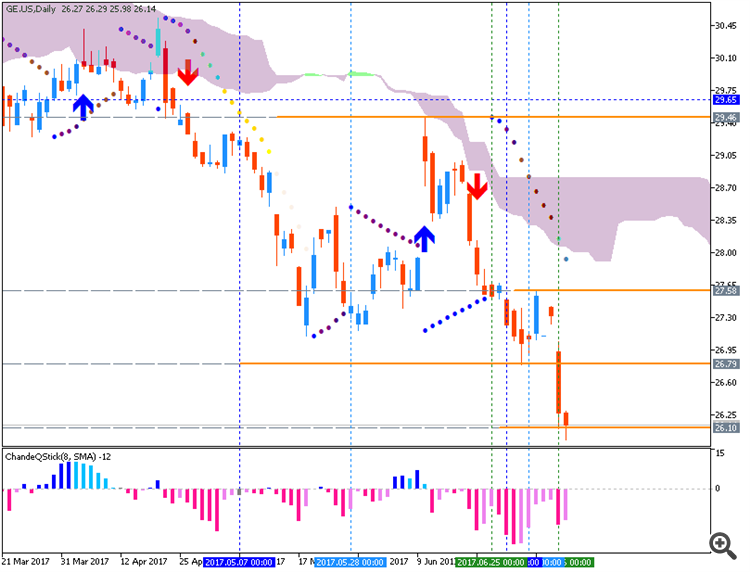 The US dollar recovered across the board in a busy start to the second half of the year. Apart from further reactions to the NFP, we have all-important inflation, consumption data, and Janet Yellen’s testimony. 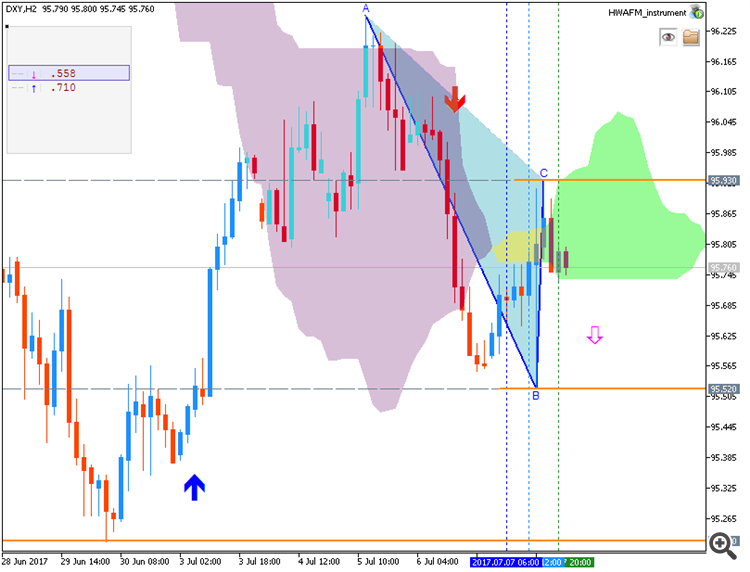 Forex Weekly Outlook - July 10-14 2017 | Forex Crunch
The US dollar recovered across the board in a busy start to the second half of the year. Apart from further reactions to the NFP, we have all-important inflation, consumption data, and Janet Yellen’s testimony. Here are the highlights for the upcoming week. 7Updates: US JOLTS Job Openings: Tuesday, 14:00. The Fed has highlighted this report in...
Forecast and levels for Forecast and levels for Forecast for Q1'17 -

EUR/USD corrected its previous gains and dropped within the range. What’s next? The upcoming week features a mix of trade, industrial output, and inflation figures. 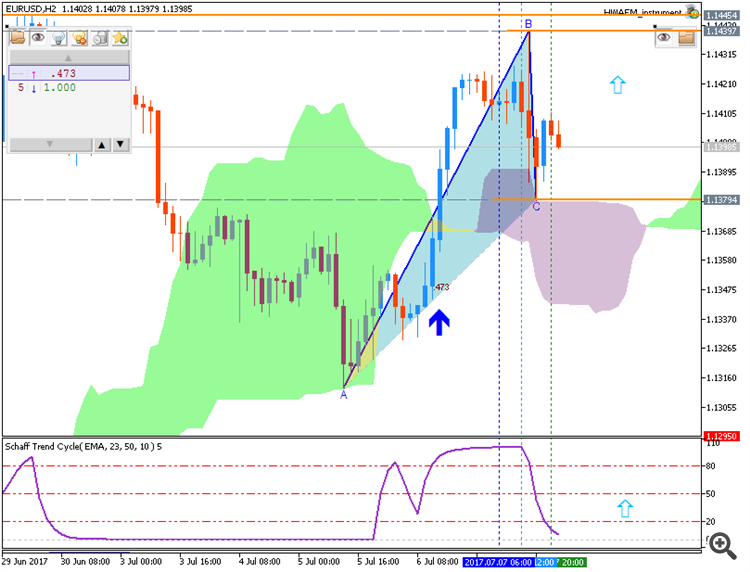 EUR/USD Forecast July 10-14 2017 | Forex Crunch
EUR/USD corrected its previous gains and dropped within the range. What’s next? The upcoming week features a mix of trade, industrial output, and inflation figures. Here is an outlook for the highlights of this week and an updated technical analysis for EUR/USD. Updates: EUR/USD daily chart with support and resistance lines on it. Click to...
Forecast and levels for Market Condition Evaluation based Forecast for Q1'17 -

Dollar/yen advanced for the fourth week in a row, extending the rise alongside the uptrend support line. Can it continue further to the upside? It is getting closer to the cycle high of 114.30 and the steep uptrend could be hard to sustain. 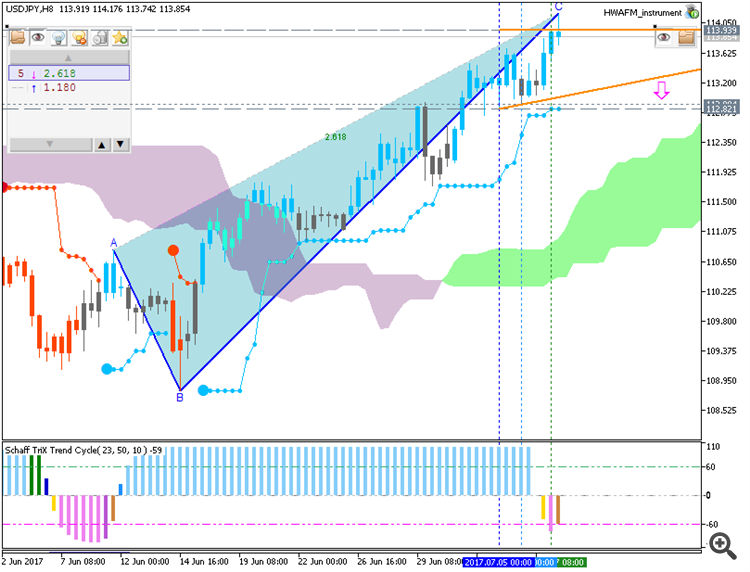 USD/JPY riding the tiger - Forecast July 10-14 | Forex Crunch
Dollar/yen advanced for the fourth week in a row, extending the rise alongside the uptrend support line. Can it continue further to the upside? It is getting closer to the cycle high of 114.30 and the steep uptrend could be hard to sustain. This is a new format of the outlook and feedback is welcome. We cover the top fundamental news and...
Forecast and levels for Forecast and levels for Eur/usd

Weekly Fundamental Forecast for Dollar Index (based on the article) 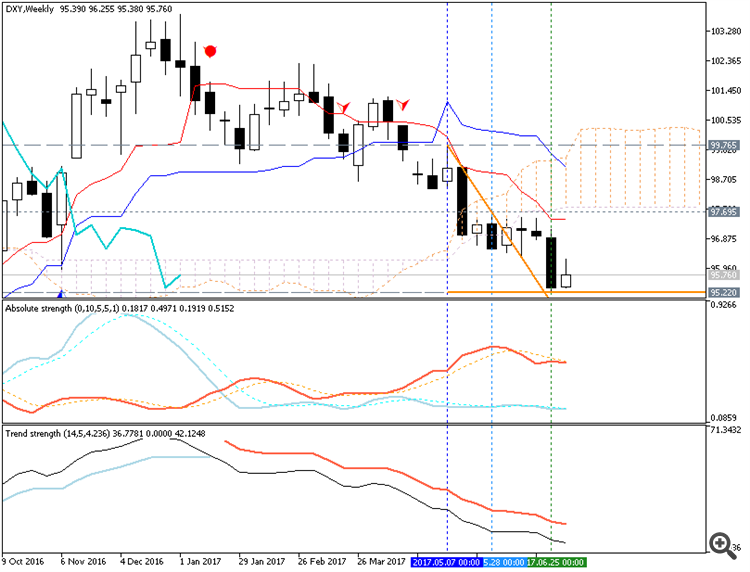 Dollar Index - "Sluggish inflation may explain the markets’ relatively dovish disposition. Disappointing wage growth data was an obvious blemish on June’s otherwise impressive employment statistics. The aforementioned ISM surveys also pointed to a slowdown in price pressure. That bodes ill for what may cross the wires when PPI and CPI numbers are published next week. This seems to support the Fed’s argument that recent disinflation owes to temporary forces while the underlying price growth trend remains on-track. When those transitory influences are rebased out over time, the case for gradual tightening will appear clear enough. If Yellen is able to articulate this stanceclearly and convincingly, traders may finally buy in and push the US Dollar up in earnest."

Weekly Fundamental Forecast for EUR/USD (based on the article) 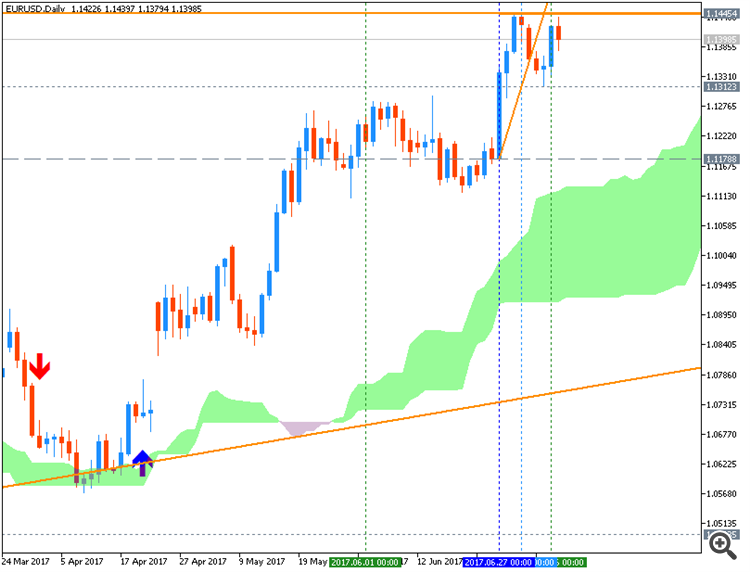 EUR/USD - "Next week is another light data week with only three European prints of medium-importance, and there are no Mario Draghi speeches on the calendar. While this certainly doesn’t preclude unplanned comments, or leaks or ‘anonymous sources’ as we saw the day after Draghi’s speech in Sintra, this light data calendar can be an opportune time to grade bullish continuation prospects for the Euro in the weeks and months ahead. But key here will likely be the matter of pair selection for those bullish Euro plays. While EUR/USD is the obvious flashpoint that generally garners the most attention, traders may be better served directing Euro-strength plays towards the Japanese Yen."

Euro Bulls Get Room to Run: But Will They Show Up to Drive the Trend?
, and Euro interest rate forwards are now pricing in two ten-basis point hikes going out to the end of next year; specifically around ECB meetings in July and December of 2018. This is a stark contrast to just a month ago, when there were no hikes expected over this same period. As we discussed last week, when the head of the bank said that...
Forecast and levels for Eur/usd Focus over ECB events 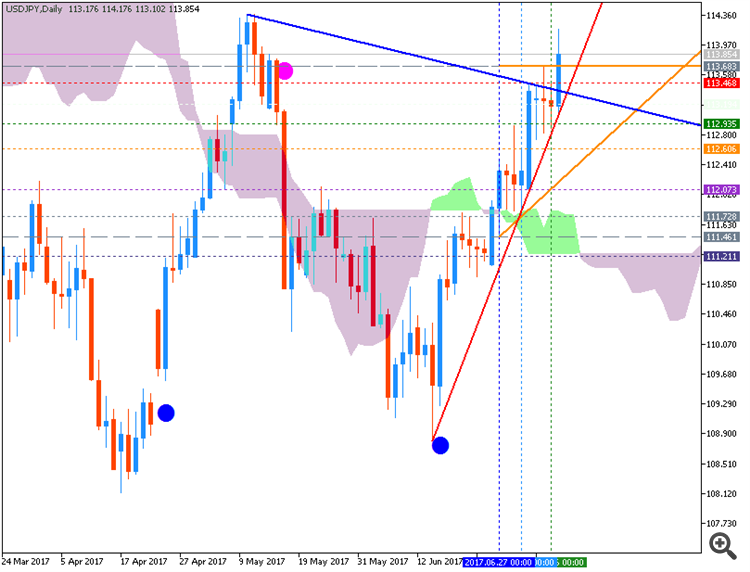 USD/JPY - "Fresh comments from Chair Janet Yellen may ultimately yield a bullish reaction in the greenback as Fed officials hold a growing discussion to unload the balance sheet over the coming months. With the economy now projected to expand an annualized 2.2% this year, the central bank head may endorse a more aggressive approach in normalizing monetary policy, and the Federal Open Market Committee (FOMC) may implement another rate-hike ahead of 2018 especially as the region nears full-employment. In turn, Fed Fund Futures may start to reflect a higher probability for a December rate-hike, and USD/JPY may continue to retrace the decline from earlier this year as the Bank of Japan (BoJ) sticks to its Quantitative/Qualitative Easing (QQE) Program with Yield-Curve Control."

USD/JPY Targets Topside Hurdles Ahead of Fed Chair Yellen Testimony
USD/JPY is quickly approaching the May-high (114.37) ahead of the semi-annual Humphrey-Hawkins testimony, with the pair at risk for a larger advance as the Federal Open Market Committee (FOMC) appears to be on course to further normalize monetary policy in 2017. may ultimately yield a bullish reaction in the greenback as Fed officials hold a...
Forecast and levels for Forecast and levels for Forecast for Q1'17 -

Weekly Fundamental Forecast for AUD/USD (based on the article) 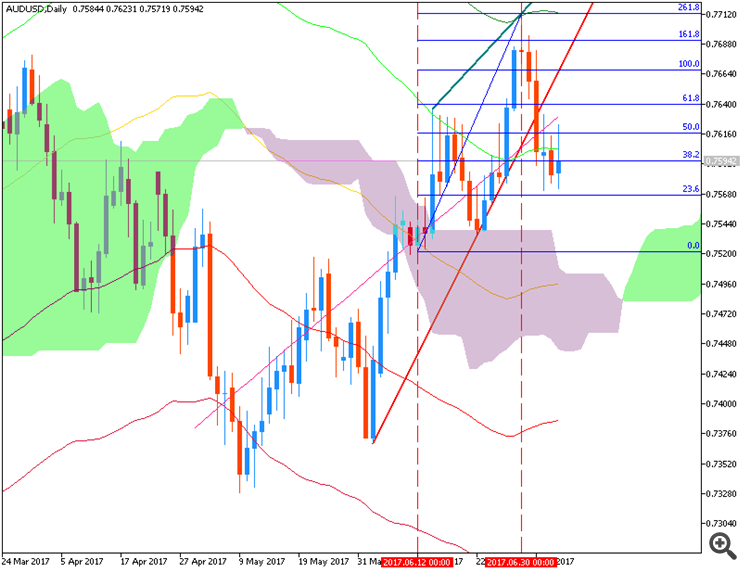 AUD/USD - "Economic numbers are also due out of China and here risks seem a little asymmetric- the Aussie may not rise much on strong data, but it has shown a recent propensity to slide on disappointments. There’s reason for this. The RBA has often worried aloud that Chinese demand for Australian raw materials may moderate. And the Australian government said just last week that the price of iron ore will be back below US$50/tonne next year as China’s steelmakers takes less of this key Australian export. Signs that any of these worries are justified tend to spook the currency. We will also here fulsomely from Federal Reserve Chair Janet Yellen. If she sticks to her upbeat tone on the US economy then there could be pressure on AUD/USD."

Australian Dollar Looks Trapped By Competing Influences
Investors had hoped that the Reserve Bank of Australia might have joined other developed-market monetary authorities in suggesting that higher interest rates were coming. that enough had changed for the Australian economy to justify a policy shift, whatever central bankers in Canada, the UK and the Eurozone may feel. Moreover, although the...
Forecast and levels for AUD news AUDUSD Technical Analysis 2015,

Weekly Fundamental Forecast for USD/CAD (based on the article) 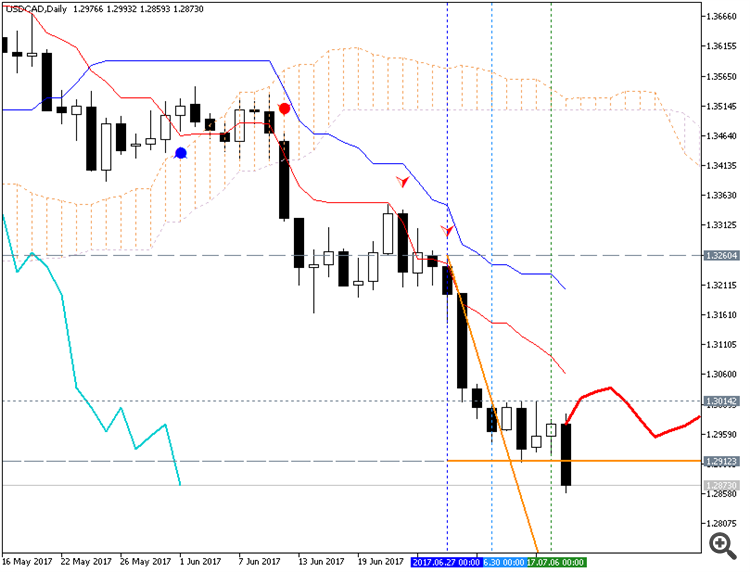 USD/CAD - "There has been plenty of disagreement among analysts over whether the Bank of Canada will increase its overnight rate to 0.75% from 0.5% on July 12. As I reported here, a rate rise was once seen as almost certain after hawkish comments by BoC Governor Stephen Poloz but doubts then set in. Moreover, there was a rise of 45,300 in employment, well above the expected 10,000 though below the previous 54,500 increase. The reaction in the Canadian Dollar was a sharp rise against its US counterpart as traders argued that the economy – or at least the labor market – is clearly now strong enough to withstand a quarter-point rate hike."

Canadian Dollar: Now it Would be a Surprise if Rates Were Left Unchanged
There has been plenty of disagreement among analysts over whether the Bank of Canada will increase its overnight rate to 0.75% from 0.5% on July 12. As I reported Those, though, were blown away Friday by a bumper labor-market report and now it would be quite a surprise if rates were left on hold. Friday’s data showed that the Canadian...
Forecast and levels for USDCAD news LiteForex Analytics
1...526527528529530531532533534535536537538539540...679
To add comments, please log in or register