In forming this rank, the analyst opinions from the major brokerage houses were tallied, and averaged; then, the underlying components of the Metals Channel Global Mining Titans Index were ranked according to those averages. Investors often interpret analyst opinions from different angles — when companies have a low rank among analysts, it isn’t necessarily the case that investors should conclude that the stock will perform poorly. It can, of course, but a bullish investor could also take the contrarian angle and read into the data that there is lots of room for upside because the stock is so out of favor.

From the other direction, a popular analyst pick could mean that many sharp minds individually came to the same bullish conclusion, and therefore the stock should do well, but it could also mean that if the company stumbles, that would come as a negative surprise.

According to the ETF Finder at ETFChannel.com, CMC makes up 2.84% of the SPDR S&P Metals and Mining ETF (XME) which is trading up by about 0.3% on the day Friday.

CMC operates in the Non-Precious Metals & Non-Metallic Mining sector, among companies like Ternium S A (TX) which is down about 0.2% today, and Vale S.A. (VALE) trading up by about 0.4%. Below is a three month price history chart comparing the stock performance of CMC, versus TX and VALE. 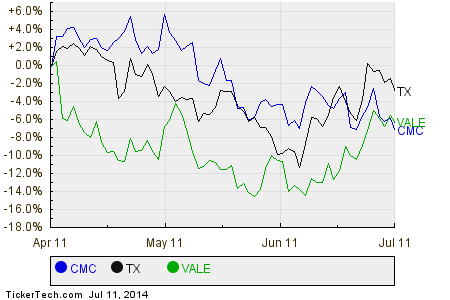 Iron-ore outstanding rally and why it may be temporary - Analysis

SOMETHING TO READ: Algorithmic Trading: Winning Strategies and Their Rationale

Why You Should Own Stocks

(30 March 2020)DAILY MARKET BRIEF 2:The US dollar halted its decline

Additional strategies for the real market