Dimitar Manov: "I fear only extraordinary situations in the Championship" (ATC 2010)

In the recent review by Boris Odintsov the Expert Advisor of the Bulgarian Participant Dimitar Manov appeared among the most stable and reliable EAs. We decided to interview this developer and try to find the secret of his success. In this interview Dimitar has told us what situation would be unfavorable for his robot, why he's not using indicators and whether he is expecting to win the competition.

Dimitar, how did you begin to use automated trading?

Programming was my passion when I was a kid. In 1985 I started writing in BASIC, then moved to Pascal and C. In 1994 I got my secondary education in economics with a degree in "Computer processing of economic information". And six years ago I discovered MQL4 and appreciated the power of automated trading. Despite the fact that I had long been involved in programming, the language seemed to me as a gift. My first steps in this field were the creation of indicators and simplest Expert Advisors. I didn't have any difficulty implementing my ideas. Everything is quite logical in this language. And the most important thing is that EAs, as opposed to people, do not feel feared or greedy.

Unfortunately, my first programs were not very successful. And I started to have good results only when I stopped using indicators. I have tried many different combinations, but alas, I realized that they wouldn't earn me money. I tried oscillators, combinations of alligators and fractals. But in the long term my account still got burned. There were problems with Stop Loss and Take Profit which are mandatory for such strategies. It seems to me they contradict the trading logics.

Your current Expert Advisor is a modified version of the robot you used in the ATC 2008. What is the difference between them?

In the Championship of year 2008 a limit of 3 orders was set. This wouldn't let me use averaging in its pure form. And there was no possibility of trading all currency pairs at a time. Now we have an opportunity to diversify risks.

I believe that pure martingale on a single pair is hopeless. The possibility to do without stop orders, in turn, gives more chances for profitable trading. In addition the very logic of the Expert Advisor is a little different. The logic of my current robot is very simple: if the price is falling - BUY, if it is moving upwards, then SELL. In short, the basic principle of trading is buy cheaper, sell dearer. 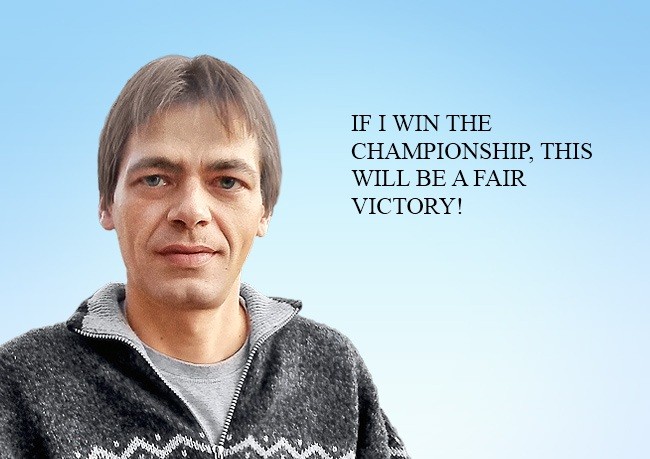 Why don't you want to use indicators in your Expert Advisors? What are the signals for you EA then?

Indicators only show the history, and the price movement is not associated with historical movements. Where the price will move now is quite another thing that has nothing to do with what has been earlier. All that we know is today's price. Charts are also useless as a guide, and all that they show will then be corrected.

For different pairs I use different trailing stops, steps and have different targets. Unfortunately, I have mixed up something for two pairs and their trailing size is equal to the size of the minimal target. And if the correction happens at the wrong time, the position will be closed with a zero profit (0 +/- $20). That's a stupid mistake of course.

Why don't you use stop orders?

Stop orders contradict to the principle of buy cheaper and sell dearer. I replaced them with increase of volume. A position closes when the profit decreases by the specified value. In general, the set value determines the trailing stop, and when determining the parameters for each pair I was guided by margin. If 0.1-lot order takes more money, the minimal profit will be large. But there are also small deviations that result from my greed. Some pairs are slightly volatile, and the number of deals and trades for them will be small, and respectively profits also will be small. For other pairs, on the contrary, large drawdown is possible.

You are trading small lots - is it your money management?

Leverage is a very powerful thing and you should be extremely careful using it. Any underestimation or error can easily lead to crash, and increased lot can result in stop-out. Aggressiveness could be achieved by decreasing the step of position volume adding and increasing the total lot, but I didn't manage to reduce the time of these calculations in the tester.

The volume of a position is determined by the price movement. Each position increase is done with a diminishing step - this way the total price of a position quickly catches the current price.

Are there any "martingale" elements in your Expert Advisor?

I don't use martingale in its pure form, because the forex is not a casino. Each averager has something similar with martingale, but still their logics are different. What is similar to martingale is that entrance is not important to my EA, the exit is the thing that really matters. It's the same with the movement direction.

Here, as in war or in love - no matter how it begins, it is important how it ends. I'm sure there will be correction - it's like everything in this life! If there are no cycles, then there is no life. Each order reduces the difference of prices and increases the chances of profiting. I'm waiting for the correction and close positions with a profit. If speaking about volume increase for open losing positions, the loss value in monetary terms doesn't decrease of course. But if measure the loss in points as the difference between the current price and the average price of a new position, the loss will be lower.

The method of choosing direction for each currency pair is also very simple - it's the reverse of the previous position. I mean after closing with a profit I open in the opposite direction: if a position is BUY, it is closed buy SELL and then opened again with a SELL.

Did you have the same smooth balance line during testing?

Yes, my EA was behaving just the same in the tester. But the slope was different depending on the set of parameters. Only a stop-out can slope this line. First I developed a multicurrency EA, and then set up all the pairs by drawdown. And I used that minimal drawdown to optimize the Expert Advisor. This ensures long-term break-even trade.

Dimitar, you didn't have much luck in the ATC 2008. Aren't you afraid that the same can happen this year?

ATC 2008 was a very important lesson for me - I realized the power of leverage and the importance of risk management. Forex is a risky business, and nobody is immune. But nothing venture, nothing have. This time I have taken into account all possible risks. However, it's too early to assess my chances yet, anything may happen.

My current EA trades 12 pairs - it lets me hope that the current drawdowns would be safe for me. Multicurrency EAs reduce risks and increase potential profits. Unfortunately, I had to remove the functions of money management and risk management from my Expert Advisor, because they are too slow and do not apply to trade in the Championship.

And what was the mistake that led to that result at the ATC 2008?

That mistake has a definite name – Lehman Brothers and everything that its bankruptcy in October 2008 led to. Just kidding of course. The pure martingale was completely hopeless during a strong trend without any correction. My EA was not optimized for such volatility that happened in 2008.

However, if now the price makes 1000 pips without correction, then my current EA wouldn't find any antidote to that. It lacks the function of step increasing, so the stop-out will come very quickly to it. In general, what I really fear in this Championship, is only exceptional and extraordinary circumstances.

You describe your Expert Advisor as the "indicator-free gridder". How do you set the grid?

The grid is set virtually. Each pair has its own virtual order (BUY_LIMIT / SELL_LIMIT). If the price reaches this level, the order is executed and a new pending order is placed.

In the report prepared by Boris Odintsov your Expert Advisor was named as one of the most stable and reliable EAs. Can you comment it?

I'd like to thank Boris for the kind words. I'm happy to receive appreciation, because my goal was to achieve stability and reliability. I believe he's right and his statistics is correct. Although only time will judge.

Who of the Participants do you think deserves winning the Championship?

Of course me. If I win the Championship, this will be a fair victory. This is a joke, of course. But if this happens, then I will publish the code of my Expert Advisor in the Code Base.

I wish all the Participants more smiles!

Simulink: a Guide for the Developers of Expert Advisors
I am not a professional programmer. And thus, the principle of "going from the simple to the complex" is of primary importance to me when I am working on trading system development. What exactly is simple for me? First of all, it is the visualization of the process of creating the system, and the logic of its work. Also, it is a minimum of handwritten code. In this article, I will attempt to create and test the trading system, based on a Matlab package, and then write an Expert Advisor for MetaTrader 5. The historical data from MetaTrader 5 will be used for the testing process.

Designing and implementing new GUI widgets based on CChartObject class
After I wrote a previous article on semi-automatic Expert Advisor with GUI interface it turned out that it would be desirable to enhance interface with some new functionalities for more complex indicators and Expert Advisors. After getting acquainted with MQL5 standard library classes I implemented new widgets. This article describes a process of designing and implementing new MQL5 GUI widgets that can be used in indicators and Expert Advisors. The widgets presented in the article are CChartObjectSpinner, CChartObjectProgressBar and CChartObjectEditTable.

Tomasz Tauzowski:"All I can do is pray for a loss position" (ATC 2010)
Tomasz Tauzowski (ttauzo) is a long-standing member of the top ten on the Automated Trading Championship 2010. For the seventh week his Expert Advisor is between the fifth and the seventh places. And no wonder: according to the report of the current Championship leader Boris Odinstov, ttauzo is one of the most stable EAs participating in the competition.

Technical Analysis: How Do We Analyze?
This article briefly describes the author's opinion on redrawing indicators, multi-timeframe indicators and displaying of quotes with Japanese candlesticks. The article contain no programming specifics and is of a general character.