You can often hear people discuss relationships between different currencies in the Forex market.

The main point at issue usually comes down to fundamental factors, hands-on experience or mere speculations resulting from personal stereotypes of the speaker. A hypothesis of one or more 'global' currencies 'dragging' all the rest can be considered the extreme case.

Indeed, what is the nature of relationships between various quotes? Are their movements coordinated or does the movement of one currency suggest nothing of the movement of another? The article describes an effort to tackle this issue using nonlinear dynamics and fractal geometry methods.

Let us have a look at two variables (quotes) x and y. At any given time, instantaneous values of these variables determine a point in the XY-plane (Fig. 1). Motion of the point in the course of time forms a trajectory. The form and type of such trajectory will depend on the type of relationship between the variables.

Figure 1. Point in the plane

For example, if the variable x has no relation to the variable y, you will observe no regular structure - the XY-plane will be uniformly filled with the points, provided their number is sufficient (Fig.2). 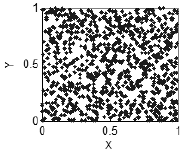 If however there is a relationship between x and y, a regular structure will appear, in the simplest case representing a curve (Fig. 3), 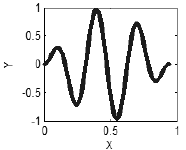 Figure 3. Presence of correlations - a curve

or even a more complex structure (Fig. 4). 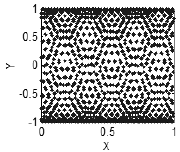 Figure 4. Presence of correlations - a structure in the plane 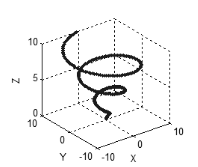 Figure 5. A curve in the three-dimensional space 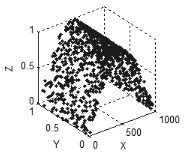 Figure 6. A surface in the three-dimensional space 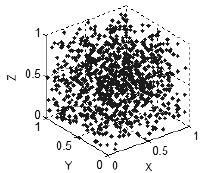 Figure 7. No correlation - points uniformly distributed in the space

The form of the resulting structure (line, surface, 3-D shape, etc.) is in this case of no importance.

We can also come across a fractional dimension, e.g. 1.61 or 2.68. This may be the case if the resulting structure is a fractal i.e. a self-similar set of non-integral dimension. An example of a fractal is given in Figure 8, its dimension is approximately 1.89, i.e. this is no longer a line (dimension 1) and not yet a surface (dimension 2). 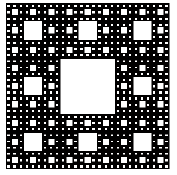 A fractal dimension of one and the same set may be different at different scales.

For instance, if you take a look at the set in Figure 9 from 'afar', you will clearly see the line, i.e. a fractal dimension of the given set is 1. A 'close-up' look at the same set will no longer reveal a line but a 'fuzzy tube' where the points do not form a clear line but are accumulated around it in a random way. A fractal dimension of that 'tube' shall be equal to the dimension of the space in which our structure is considered as the points in the 'tube' will get uniformly distributed across all available dimensions.

An increase in fractal dimension at smaller scales allows to estimate a dimension at which the relationships between variables become indiscernible due to the presence of random noise.

Figure 9. Example of a fractal 'tube'

A fractal dimension can be estimated using the box-counting method based on the analysis of dependence of the number of boxes containing points of a set on the side length of the box (it does not have to be a 3D box - a 'box' in the one-dimensional space will be represented by a segment, in the two-dimensional space by a square, etc.)

Without going into much detail, the operation of the algorithm can be described as follows:

For example, Figure 10 shows two sets: a plane figure (a) and a line (b). Cells that contain points of the set are filled in gray. Counting the number of 'gray' cells with different cell sizes, we obtain the dependences illustrated in Figure 11. The slope of the straight lines approximating these dependences helps estimate the fractal dimensions: Da≈2, Db≈1. 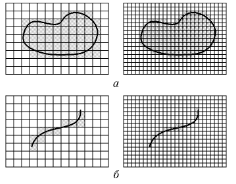 Normally, a fractal dimension is estimated in practice using the Grassberger-Procaccia algorithm instead of the box-counting method, as it yields more accurate results in high-dimensional spaces. The idea of the algorithm is to obtain a dependence С(ε) of the probability of two points of a set getting into in a ε-sized cell on the cell size and to determine the slope of a linear section of such dependence.

Unfortunately, it is impossible to cover all aspects of estimating fractal dimension within the scope of this article. Further information, if required, can be found in specialized literature. 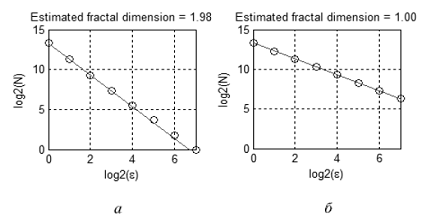 To verify the performance of the proposed technique, let us determine the noise level and the number of independent variables for the set shown in Figure 9. This three-dimensional set consists of 3000 points and represents a line (one independent variable) with superimposed noise. The noise is normally distributed, with root-mean square error of 0.01.

Figure 12 demonstrates the dependence С(ε) in logarithmic scale. There are two linear sections intersecting at ε≈2-4.6≈0.04. The slope of the first line is ≈2.6, the slope of the second line is ≈1.0. 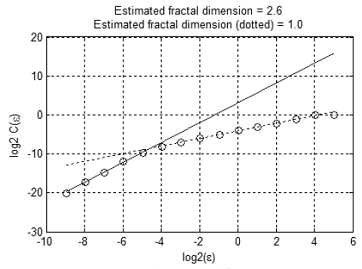 Algorithms for estimating fractal dimension were implemented in the form of MATLAB environment functions based on developments made by Dr. Michael Small (http://www.eie.polyu.edu.hk/~ensmall/matlab/). Functions with implementation examples are available in the frac.rar archive attached to this article.

To speed up calculations, the most time-consuming part was written in C language. Before you start, compile the C function "interbin.c" using the MATLAB command "mex interbin.c".

Figure 13 shows a joint movement of EURUSD and GBPUSD prices from 2000 to 2010. The price values as such are demonstrated in Figures 14 and 15. 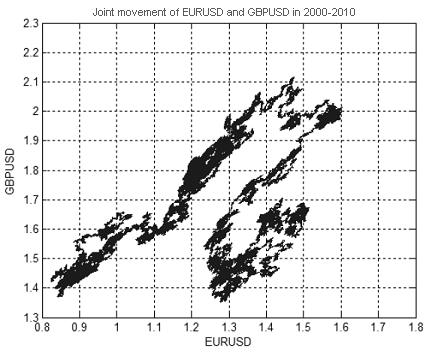 A fractal dimension of the set shown in Figure 13 is approximately equal to 1.7 (Fig. 16). This means that EURUSD + GBPUSD movement does not represent a 'purely' random walk, otherwise its dimension would have been 2 (dimension of a random walk in two- and more-dimensional spaces is always equal to 2).

However, since the price movement is very similar to the random walk, we cannot analyze the price values by themselves - fractal dimension changes insignificantly when new currency pairs are added (Table 1) and it is impossible to draw any conclusion.

Table 1. Change in dimension upon increase in the number of currencies 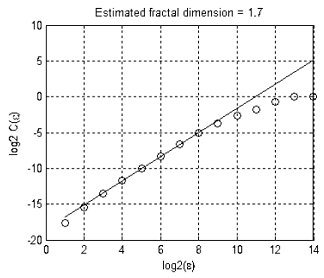 To obtain more interesting results, we should proceed from the quotes to changes in them.

Dimension values for various increment intervals and different number of currency pairs are provided in Table 2.

If currencies are interrelated, the fractal dimension, every time the new currency pair is added, should increase less and less significantly to finally get to a certain value that will determine the number of 'free variables' in the currency exchange market.

If we also assume, that the 'market noise' is superimposed on prices, all available dimensions may get filled with the noise on short time frames (М5, М15, М30) and this effect should subside on longer time frames 'revealing' the dependences between the quotes (as in the test example).

As Table 2 suggests, this hypothesis was not confirmed by actual data: the set gets distributed across all available dimensions on all time frames, i.e. all currencies are independent of each other.


As can be seen in this Figure, the dependence gets further and further stretched diagonally and the correlation coefficient value goes up as the interval increases. However, in terms of fractal dimension, the noise level is too high to consider such dependence a one-dimensional line. Fractal dimensions on longer intervals (weeks, months) will perhaps converge to a certain value but we are not given the facilities to check this due to insufficient number of points for estimation of the dimension.

It would certainly be more interesting to narrow down the movements of currencies to one or more independent variables to considerably simplify the task of reconstructing the market attractor and forecasting prices. The market however yields a different result: dependences are poorly pronounced and "well hidden" in a large amount of noise. The market is very efficient in this regard.

Methods of nonlinear dynamics that steadily yield good results in areas like medicine, physics, chemistry, biology and others, require particular attention and careful interpretation of findings when used in the market price analysis.

Attached files |
Download ZIP
Frac.zip (8.18 KB)
Warning: All rights to these materials are reserved by MetaQuotes Ltd. Copying or reprinting of these materials in whole or in part is prohibited.
Go to discussion

On Methods of Technical Analysis and Market Forecasting

The article demonstrates the capabilities and potential of a well-known mathematical method coupled with visual thinking and an "out of the box" market outlook. On the one hand, it serves to attract the attention of a wide audience as it can get the creative minds to reconsider the trading paradigm as such. And on the other, it can give rise to alternative developments and program code implementations regarding a wide range of tools for analysis and forecasting.

There is no trouble finding the Holy Grail of testing, it is however much more difficult to get rid of it. This article addresses the selection of the Expert Advisor operating parameters with automated group processing of optimisation and testing results upon maximum utilisation of the Terminal performance capabilities and minimum end user load.

The article focuses on one-step-ahead forecasting for EURUSD using EViews software and a further evaluation of forecasting results using the programs in EViews. The forecast involves regression models and is evaluated by means of an Expert Advisor developed for MetaTrader 4.

This article draws your attention to the brief review of the method and program code of the mechanical trading system based on the technique proposed by Stanislav Chuvashov. The market analysis considered in the article has something in common with Thomas DeMark's approach to drawing trend lines for the last closest time interval, fractals being the reference points in the construction of trend lines.