"With the breakdown of Euro Area GDP data and US Jolts figures the ‘highlight’ of today’s economic news, the FX market will go on watching bonds. There is no catalyst for EUR/USD to fall back unless amnesia fades and we remember the implications of the US data. That seems unlikely, whereas stronger German labour cost data is yet another sign of stirrings in the heart of the Euro area." 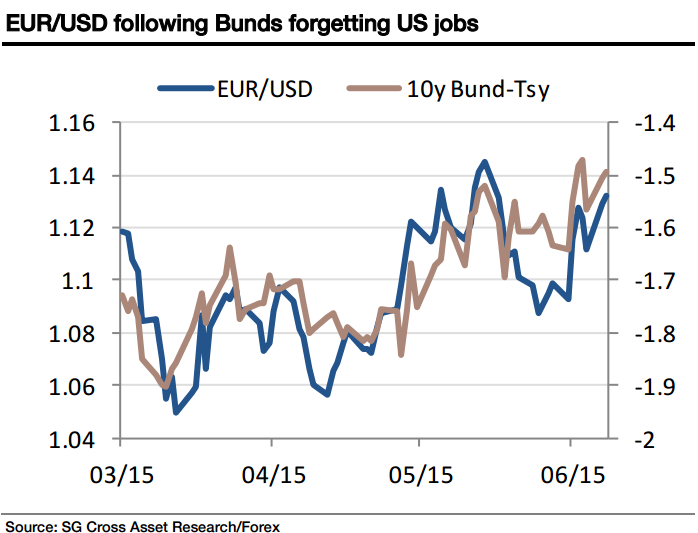 "The technical folks tell me that it takes a close above 1.1315 to signal a test of the March 1.1470- high. The Bund/Treasury spread tells me there’s a fair chance of that happening."

Forex technical analysis: EURUSD moves back toward unchanged on the day (based on forexlive article) 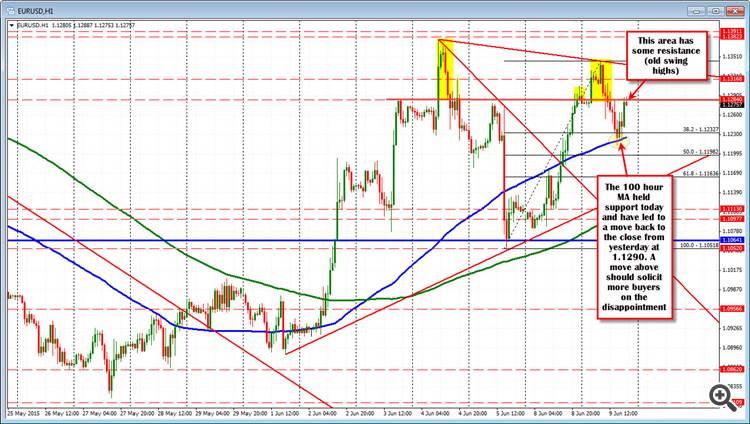 "The EURUSD has moved back toward unchanged on the day at 1.1290. The corrective high just peaked the the 1.1288 level.   The area was near the swing high on June 3. On Unemployment Friday, early sellers came in against the level. Today, in the Asian and London morning session, the pair had some peaks near the level."

[AUD - Employment Change] = Change in the number of employed people during the previous month. Job creation is an important leading indicator of consumer spending, which accounts for a majority of overall economic activity. 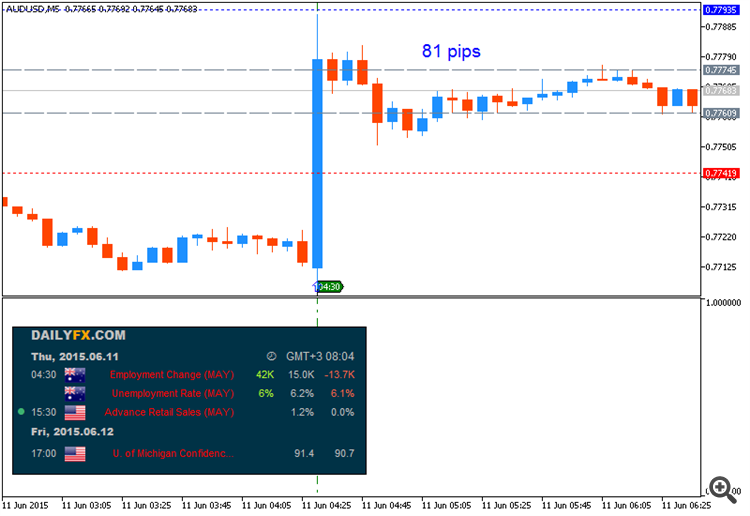 Trading the News: USD Retail Sales (based on dailyfx article) 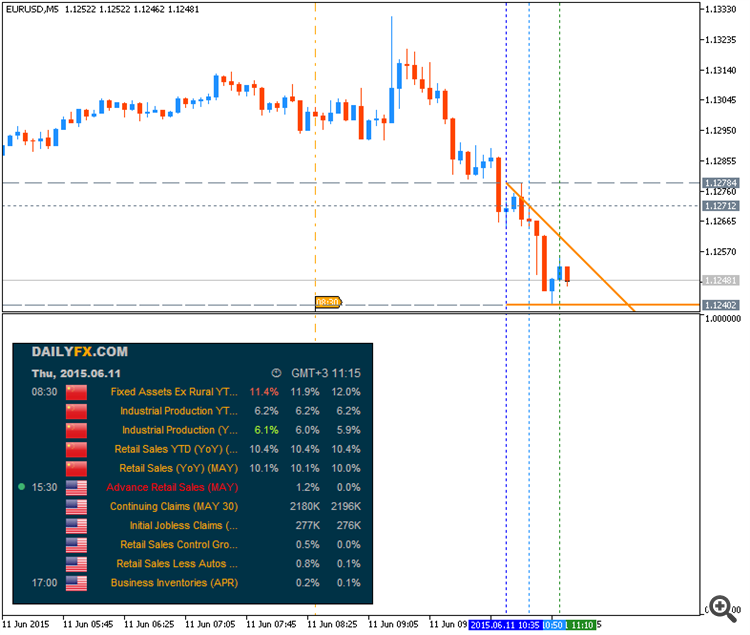 Signs of a stronger recovery may encourage the Federal Open Market Committee (FOMC) to adopt a more hawkish tone at the June 17 interest rate decision, and expectations for higher borrowing-costs may spur a resumption of the long-term bullish USD trend as the central bank moves away from its easing cycle.

Nevertheless, retail sales may continue to disappoint amid easing discounts paired with waning consumer confidence, and another weaker-than-expected report may drag on the dollar as it raises the for a further delay in the Fed’s normalization cycle. 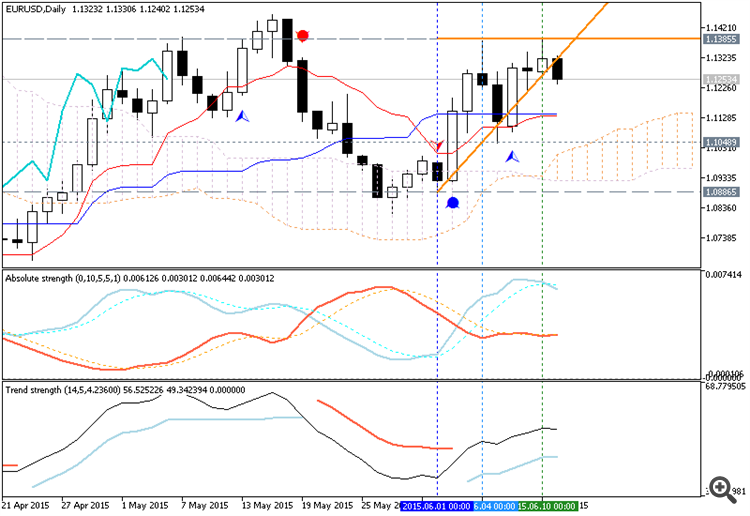 Morgan Stanley Chart Of The Week: EUR/USD Key Triggers (based on efxnews article)

On the long-term EUR/USD Chart

"Despite the corrective rebound developed since early March, EURUSD remains within a long term down trend, which accelerated from June of last year. Indeed, this move lower over the past year forms part of a C wave decline within a broad multi year corrective structure which has developed since the 1.6038 peak of 2008. The pace of decline over the past year is typical for a C wave. This suggests upside potential is limited for EURUSD," MS notes.

On the 2-Year EURUSD Chart

"The sub-structure of the decline from June of last year has been “impulsive”, with a 3 rd wave within the C wave now developing. The subsequent recovery since March has developed a clear 3-wave corrective structure, which now looks to have been completed at the 1.1467 mid-May peak (4th wave top within wave (3). This implies the next stage of the EURUSD decline (5th wave within wave (3)) is now likely to unfold," MS projects.

On the 90-Day EURUSD Chart

"This bearish interpretation will be confirmed by a move below 1.1005, suggesting the next impulse decline is set to take EURUSD below the 1.0854 level and back to the 1.0458 March low. This even implies a move to new lows with potential for a decline below parity over the medium term. Near-term risk to this scenario is a move above 1.1467, which would suggest another corrective leg higher before the downtrend resumes." MS argues.

EUR/USD: With yesterday’s downside correction out of the way there’s a big question mark over what the next step from here will be. However as long as the hourly pattern with lower highs remains in place (i.e. staying below 1.1278) we will hold a light downside bias. 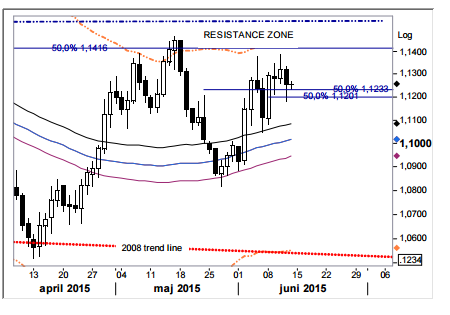 EUR/JPY: With a relatively high probability we’re now in for a third attempt to break below the 138.44 support. The key question will of course be whether the break will be sustained or not. A sustained break lower will increase the probability that we prematurely have ended the C-wave (theoretical target = 143.96) and hence the entire correction from the April low. 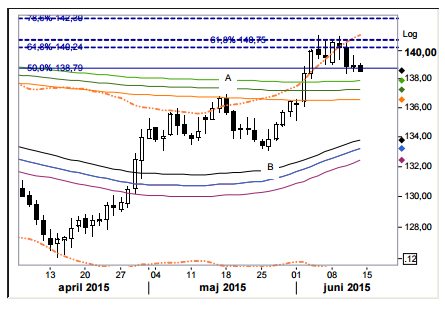 EUR/GBP: With the latest development, the break and close below 0.7267, we can with a lot higher confidence call for wave C to now have been put in place. More losses are expected near term with focus at the ideal point for wave D, 0.7127. 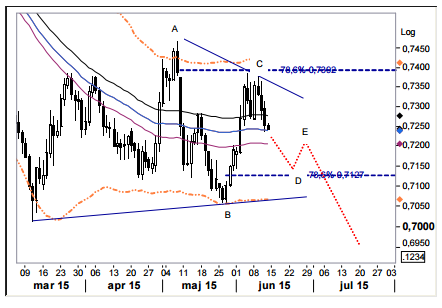 "The rise in eurozone bond yields has caused the EUR’s status as a funding currency to fade in recent weeks and the JPY to overtake as the favoured currency for the market to sell, especially as a funder for long USD positions. This switch in focus has caused EURJPY to rise 10% over the past two months, reaching its highest level since January earlier this week.

The EUR should re-emerge as the main funding currency.

Second, the net supply picture is better for European bonds as we move into the summer months and expect better performance ahead (Chart 1). We expect a decline in yields over the months ahead to encourage EUR-funded carry trades to be re-established.

ii. Our Positioning Analysis indicates that short EUR positioning is at light levels with a score of -10 (out of -50), having reached -4 last week (its lightest level since the start of the year). As such, there appears to be substantial scope for short EUR positions to be restored
EURUSD Technical Analysis 2015, Press review EURUSD Technical Analysis 2015,

Ian Stannard from Morgan Stanley: "despite the corrective rebound developed since early March, EURUSD remains within a long term down trend... suggests upside potential is limited for EURUSD" and the "sub-structure of the decline from June of last year has been "impulsive... the next stage of the EURUSD decline ... is now likely to unfold."

"This bearish interpretation will be confirmed by a move below 1.1005, suggesting the next impulse decline is set to take EURUSD below the 1.0854 level and back to the 1.0458 March low. This even implies a move to new lows with potential for a decline below parity over the medium term. Near-term risk to this scenario is a move above 1.1467, which would suggest another corrective leg higher before the downtrend resumes."

Barclay: The Case For Staying Short EUR/USD Into FOMC (based on efxnews article)

"Markets will pay close attention to the tone of the FOMC statement on Wednesday and watch for hints on the timing of the first rate hike. Given the recent pickup in US consumption and labor market data, we think the Fed is likely to maintain its view that the winter slowdown was transitory and that the economy is likely to expand at a moderate pace. Indeed, the pace of job growth has picked up, with payrolls rising 280K in May, and the Fed’s LMCI has increased since the April meeting. Additionally, we expect the Fed to reiterate that inflation will gradually rise toward the 2% target in the medium term as the labor market continues to improve and inflation expectations remain stable," Barclays clarifires.

"Indeed, CPI data on Thursday, along with the latest import price data, should support our view that downward pressures on domestic core inflation from the lagged effects of USD appreciation will begin to wane going into the third quarter. As such, we continue to think the Fed is on track to hike twice this year (at the September and December meetings)," Barclays projects.

"Overall, we believe that the FOMC statements, along with CPI and other macro data, should support the USD," Barclays argues.

"Greek political uncertainty remains high, as the gap in negotiations between Greece and the Institutions remains substantial. The IMF is reported to have walked away from talks with Greek officials on Thursday because of the inability to find agreement on such issues as pension and tax reforms. Meanwhile, the economic and financial situation is continuing to deteriorate in Greece, with the state revenue shortfall having grown €1bn in May to reach a total of €2bn, and with the ECB having last week raised the limit on the Emergency Liquidity Assistance (ELA) to Greek banks by a further €2.3bn, to €83bn. The Eurogroup and ECOFIN meetings will be held on 18 and 19 June, respectively," Barclays notes.