At last it happened - on October 1, 2012 started the sixth Automated Trading Championship 2012 in which representatives of 59 countries will participate! Personal data is verified, Expert Advisors of all registered participants are finally checked and the list of contestants is approved. This year 451 trading robots will fight for the 80,000 US dollars prize. But for three competitors the Championship is over, more on that later.

Top three places in terms of EAs allowed to the competition are traditionally shared by Russia - 156 participants (34,6%), Ukraine - 38 (8,4%) and China - 24 (5,3%). By the number of participants Belarus has been on the fourth place last year, while this year it yields to Germany with its 15 participants and now shares fifth place with Indonesia, Spain and the United States (each has 13 participants). 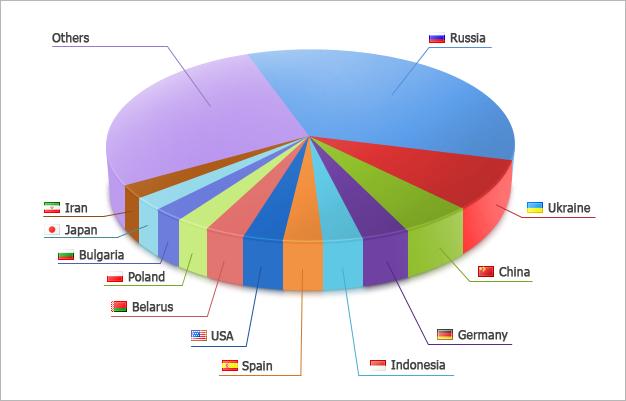 As always, there was a large drop-out of applications from Indonesia. While at the moment of 09.21.2012 personal data of 261 representatives of this country has been approved, only 13 trading robots came to the starting line of the Championship. This is mere 5% of the original amount of competitors who passed the first step of verification. To be fair we must note that India also was in the top three by the number of submitted applications after registration end. But only two of 193 participants who filled out their details will compete for prizes.

For this Championship start we timed the release of the new version of Signals - now in order to copy deals from an account of trading signals provider all you need is to subscribe to it. The new upcoming build will let you automatically copy deals of a selected Automated Trading Championship 2012 participant directly to the MetaTrader 5 terminal.

Read the full article on the Championship's website - Automated Trading Championship 2012 Has Started!

Throughout the entire duration of the Automated Trading Championship 2012, we will be providing live coverage of the events - hot reports and interviews every week. As the first few days of the competition unfold and the TOP 10 is forming, some participants have already broken through with their Expert Advisors. Thus wlagor's equity increased to $20.000 the very first day.

This report spotlights Achmad Hidayat (achidayat), the participant from Indonesia. On the first day of the Championship his Expert Advisor secured its position in the third ten, which is a good start. Achmad has sparked our interest with his active participation in the MQL5 Market. He has already published over 20 products thus far. 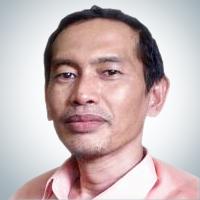 Hello! Can you tell us a bit about yourself, where you are from and what you do?

Hello. I'm a Physics Lecturer at University of Brawijaya in Malang, Indonesia.

How did you know about financial markets and Forex trading? Did you start straight off with MetaTrader or do you have experience working with other systems?

I learned about Forex around four years ago from the Internet. I started with a Java-based platform but then switched to MetaTrader which I've been using ever since.

Please tell us about your trading experience. What was your first profit and loss?

I started with manual trading using technical indicators. But I could not cope with the emotional side and had quite a few losses. Then I got interested in trading robots. I managed to get some profit using them which however could not cover for losses. Now I hope to get some money through participation in the Championship. If all my profits are taken into account, they will not cover all the losses. But I am still optimistic about Forex trading, especially using Expert Advisors.

Read the full article on the Championship's website - Interview with Achmad Hidayat (achidayat).

With all due respect no one trade 15 lots on a 10K account.

Many will blow their accounts before the end of the championship.

You can almost hear the "Banzai"

And the some of those will win, and people will think that it knew what it was doing ... every year the same

MiniMe:
With all due respect no one trade 15 lots on a 10K account. Many will blow their accounts before the end of the championship.

PS: on my broker they would get a cool "Not enough money" if they try to open those positions. Margin alone for those positions is bigger than that starting money they have ...

That is the nature of that competition : it is not about having an expert advisor that is usable in everyday life. It is about taking maximum risk in 3 months and hope that it is your EA that is going to fall into the 1‰ that will survive the suicidal "strategy" and win. For a long, long time there was no "real life" EA on that competition, since that is not what is expected there : nobody is interested in a steady earning, regular risk and money managing EA there.

Big changes for MT4, real market advice All you need to

By the end of first week our Championship has got a new leader Crucian from Ukraine. His Expert Advisor confidently took profit of $7000 and yet continues to open a profitable position. We will carefully monitor the situation, preparing new reports.

Today we are going to talk with Rogério Figurelli (figurelli), a regular participant from Brazil that has not missed any Automated Trading Championship since 2007. This year, he also began to sell his Championship's Expert Advisor in the Market along with his other products. Rogério believes that MetaTrader 5 platform certification on the largest Brazilian exchange BM&FBOVESPA will reveal new professional developers and traders, who do not yet know the full potential of robot investors. 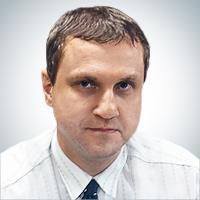 Hello Rogério! Tell us a little about yourself. How did you get into trading? I've always been involved with the research and development of new technologies. Since 1998 I became interested in the area of robots software, then switched into segment of real time information (news) and competitive intelligence. I was one of the pioneers in the area launching a software similar to Google News in 1999.

In 2003 I founded a company, where I devote myself to the development of trading robots and technologies in the financial and quantitative systems. In 2008, in my MBA dissertation, I proposed a new investment school called Vision School, based on strategic vision for quantitative systems and still in this year I launched the first Brazilian blog in this area.

Is automated trading becoming popular in Brazil? How did you get started?

In my opinion, there is still a strong resistance in this area in Brazil, due to lack of tools like MetaTrader, but I'm sure the situation will change in the next few years. I have started developing my own systems in C++ in 2003, and had the first contact with MQL4 in 2007, researching Forex and its technologies.

I started to migrate my systems to this platform, as well as to MQL5 from 2008. Currently, I'm using C++ and MQL5 in all of my systems, as well as integrating other tools and market solutions, such as Matlab.

Read the full article on the Championship's website - Interview with Rogério Figurelli (figurelli).

How is that any good ? and now he is selling the EA

There is no doubt that many smart people (Phd's , CEOs , engineers , doctors ... ) are trying to decode the forex market, BUT this does NOT mean that every engineer or doctor ...etc, who read/learn/code something in forex and spend years trying to make money out of it is actually a profitable trader.

I think you guys need to wait till the end of championship before you make further interviews.

Is there anyone here Automated Trading Championship 2012: CODE Help( Urgent)

Advertising an EA that got margin called in less than a week. Interesting approach ...

First Week: Who Wants to Do Some Trading?

The first week of the Automated Trading Championship 2012 is over. It was full of high points and interesting comments. The most impatient and "overpowered" trading robots rushed to the market looking for all possible conditions for making deals. This is not surprising considering that Expert Advisors that "fire from the hip" usually show the best results during the preliminary tests.

However, none of these "quick-firing robots" managed to find themselves in the Championship's TOP-10 of the first week. 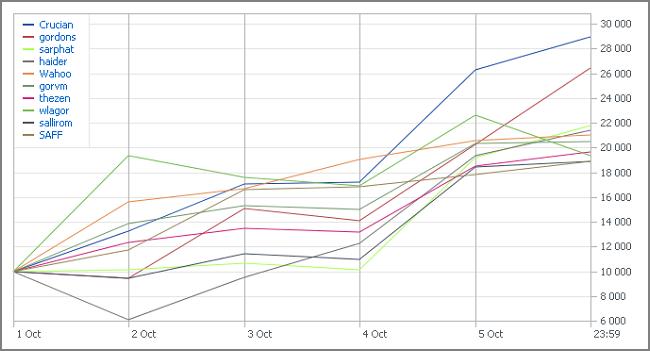 Some participants have already left the Championship due to technical reasons:

In fact, such errors have always been quite common at the starts of the Championships despite our warnings and recommendations. However, we wish correct operation of stability control system (wise money-management) and reliable breaks (Stop Loss should not mean Stop Out) for those participants whose trading robots are still alive and well.

The first week of the competition coincided with the release of the Non-farm Payrolls report, and this was a good test for many participants. We will continue to monitor the Championship and will try to communicate the most interesting stuff.

Read the full article on the Championship's website First Week: Who Wants to Do Some Trading?

It was on Friday of the Championship's first week that the trading robot of Andrey Barinov (Wahoo) occupied the fifth place in TOP-10. Andrey is a newcomer in the Championship but he has already managed to execute more than 100 orders in Jobs and develop a dozen of products for Market. We have arranged an interview with him and learned that the development of a "simple multicurrency Expert Advisor" is not an easy but a fairly easy task. 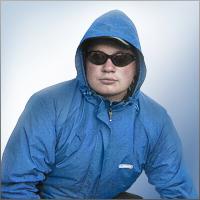 Hello, Andrey! Why do you have such a strange nickname Wahoo? I think, it is no stranger than any other. I was trying to invent some non-existent word initially. But it turned out to be quite a challenge. Later, I found out that Wahoo is a name of a very strong and fast fish difficult to catch. I decided that strength and speed are the things I want to be associated with. "How do you call a boat, so it will float."

Very interesting! How did you start your trading activity and programming of trading robots? I started real trading a few years ago. I traded manually but the results were not so good. Then I took a rather long break. I accidentally learned about the Championship a few months ago and decided to participate. To do this, I had to master MQL5 to develop my Expert Advisor. Then I became interested in "Jobs" service and realized that I can help other people to write Expert Advisors based on their strategies. However, I also had to clarify some questions concerning MQL4, as it is still a very popular language. That is how the next stage of my Forex activity started 3 months ago.

The full text of the news can be found at the Championship's website - Interview with Andrey Barinov (Wahoo).