One factor that has supported the European stocks, especially the more cyclical ones, has been the retreat of the Euro. Technically, the main support of the European currency is located in the 1.1470 area. However, if the Euro starts trading above 1.1660, the likelihood of a short-term recovery becomes more robust.

With respect to the domestic market, the Commerce Department reported that the US economy grew 3% in the third quarter, surpassing economists’ forecasts of 2.50%. If we exclude the “inventories” effect, GDP grew by 2.30%.

The recovery of the Euro Zone economy continues to gain momentum. The Euro Zone grew 2.5% in the third quarter of this year compared to the same period in 2016, the strongest pace since the start of 2011. This result allows the euro countries to take off from the United Kingdom, as well as from the United States.

After yesterday’s strong valuation of the DAX, we could see some profit taking by some investors of very short term, the so-called fast money.

Dow Jones Industrial Average is holding above the 10-week moving average that should provide a good dynamic support for next week.

The positive trend on Wall Street continued at the beginning of the week as the end of the earnings season approached. Broadcom has officially launched the takeover bid for Qualcomm, which is the largest technology operation ever, valued at 103,000 M.USD. Advanced Micro Devices was up 5.90% on news that it plans to partner with Intel to form a personal computer chip unit. Meanwhile, investors were also paying attention to President Donald Trump's statements during his visit yo Asia, concerning North Korea's nuclear missile program and foreign trade.

In a scenario of a slowdown in the release of corporate results, some stocks renewed new highs, even though stock indexes kept fluctuating.

Price on the daily chart is on bullish breakout for 2,593 resistance level to be breaking for the bullish trend to be continuing. 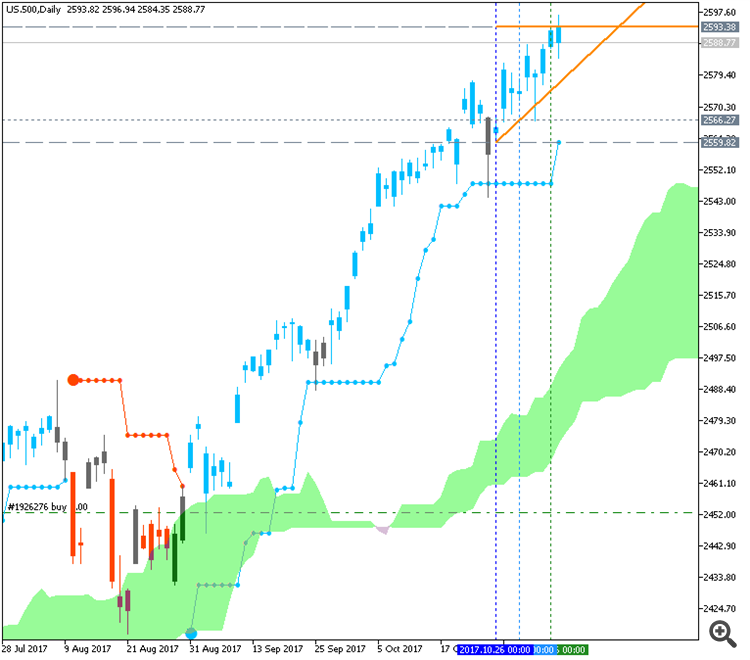 Press review Forecast and levels for Stock Market A To

With the economy expanding to 3% and with interest rates at low levels, many companies are tempted to expand through mergers. With funding rates at historically low levels, a merger or acquisition may be the fastest route for a company to increase its size and market share.

In US the budget committee warned that the proposed Republican tax reform would increase the public deficit by more than 300,000 M.USD than estimated by this proposal. Accordingly, the deficit threshold approved by the Senate (1 500 000 000 M.USD) would be exceeded. Today’s session is expected to be conditioned by the behavior of oil, the presentation of the results of some retailers such as Kohl’s and Macy’s (which signals the end of the earnings season), possible developments regarding the tax reform and news related to the visit President Trump to China.