Last friday US indices closed without major swings. American investors have shown little permeability to the strong devaluations observed in Europe. The reason for such resilience is that the strength of the Euro (dollar weakness) detracts from European companies' competitiveness but adds to American companies. Perhaps the American indices would have been able to prolong this week's rally if General Electric's results had not been badly received by the market. Given the relevance of GE in the American industry and in the global economy, the devaluation of its stock had a direct impact on many stocks and on the general sentiment of investors. Despite all the symbolism that GE assumes, its disappointing results do not shake the positive signs given by the earnings season as a whole.

In the pre-opening, the European indices traded without great variations. The Euro was trading at a slight rise, which should exert pressure on European markets. Yesterday, it should be noted that 10-year German yields were trading again at levels below 0.50%. Now, if German yields remain below 0.50%, the odds, from a technical point of view, of a yield decline are higher than a rise. With regard to the Euro, the most relevant is not so much the German interest rates, but its comparison with the American ones. While the decline in US yields is more pronounced than that of the German bunds, the trend will be for the Euro to appreciate, with all other factors remaining constant. In sectoral terms, the car should deserve a particular highlight. Having been one of the driving forces behind European (and especially German) markets in recent years, in recent months this sector has been under sales pressure as a result of the scandals of pollutant gas emissions, the strength of the Euro and the drop in sales in Europe, After 6 years of expansion.

Asian markets closed without a common trend, though prudence over today’s Fed meeting has dominated investor sentiment. The Nikkei closed with gains near 0.50%, favored by the devaluation of the Yen against the Dollar.

Without any news, the Fed meeting turned out to be a painless event, allowing investors to focus on the other issue of the moment: the earnings season. In this chapter, the news has been favorable, with the vast majority of companies reporting numbers that beat forecasts. 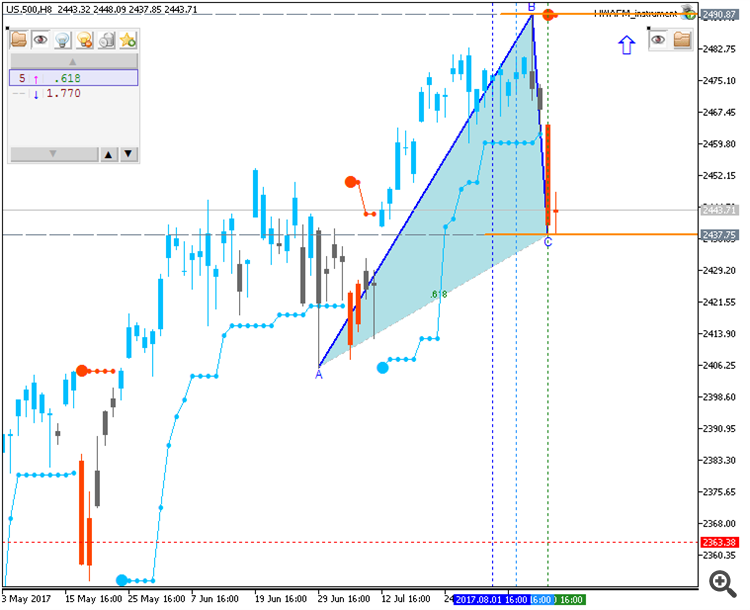 S&P 500 - "The dominating theme next week will be how markets react to the heightened tensions between the U.S. and North Korea. We saw a bit of ‘risk-off’ last week, will we see more headlines impacting investor appetite for stocks in the week ahead? On the data-front, we have Advance Retail Sales for July on Tuesday and then the next ‘high’ impact data event isn’t until Friday when we get UofM Confidence for August."

According to the latest news, Secretary of State for Defense Jim Mattis and US Secretary of State Rex Tillerson will have reported that the Trump Administration continues to seek diplomatic resolutions with Pyongyang. Still, investors should continue to monitor developments in relation to the situation on the Korean Peninsula.

The lowering of the risk of a US-North Korean military conflict has restored some confidence to European markets that have started the week with significant gains, recovering from last week's losses.

The minutes of the last meeting of the FED, held on 25 and 26 July, will be published today. In this event, the Federal Reserve kept the fed-funds interest rate range unchanged at 1.00% -1.25% and signaled that the balance-sheet normalization process will soon begin. The first step will most likely be the reduction of asset purchases with the money coming from repayment of maturing bonds. To justify this decision is the positive view the FED has of the economy. With the economy operating at full employment, with the creation of jobs being labeled “solid” even with the 4.40% unemployment rate, with consumption and investment growing, the Central Bank believes that are gathered the conditions to reduce its balance sheet (amounting to 4 500 000 M.USD). According to CNBC, with these economic data published yesterday, expectations for a rise in interest rates in December increased to 54% from 37% the previous day.

During today's session, investors should react to the publication of the minutes of the last Fed meeting. On the other hand, while fears about tensions between North Korea and the US have softened, worries about the situation Politics in the US worsened after US President Donald Trump had closed two consultative bodies on economic matters yesterday in the face of the resignation of prominent businessmen on board.

Daily price is above Ichimoku cloud for the bullish ranging within the following support/resistance levels: 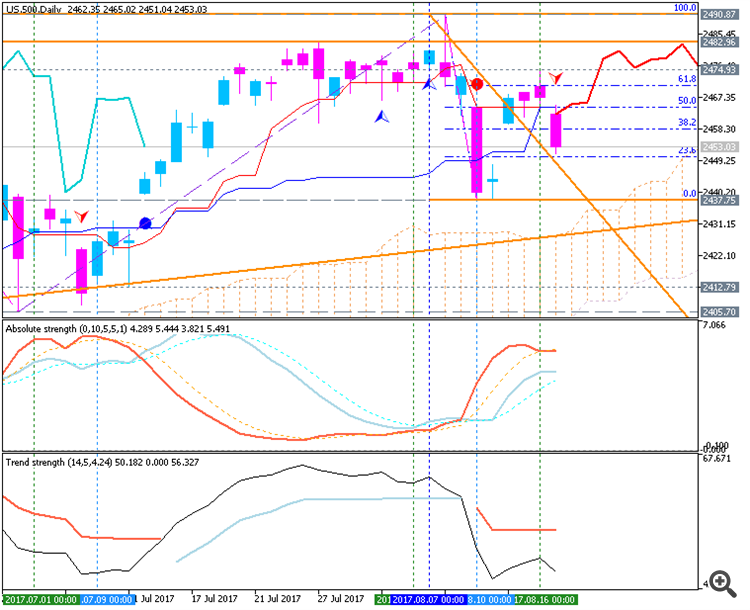