Fears about the terrorist attack in Barcelona, as well as political uncertainty in the US and still some geopolitical tension shall led investors to opt for safe haven assets.

European markets were downtrending, reflecting the behavior of the US market, as well as renewed fears about tensions between the US and Korea, with the news that the US and South Korea Start their annual military exercises today, which are expected to last for 10 days between 21 and 31 August and will be a test of North Korea’s behavior. Although planned for some time now, these exercises come at a delicate time, after several weeks of an exchange of war rhetoric between Washington and Pyongyang that drew the worst fears, although last week tensions have subsided with statements by Kim Jong that said Which for now would contain his plans. Expectations are mostly concentrated at the Jackson Hole Conference at the end of the week.

These days, the environment in the global stock markets is marked by an expectation of the Annual Central Bank Conference to be held in Jackson Hole later this week, although most analysts are not expecting Janet Yellen and Mario Draghi , Presidents of the FED and the ECB, to bring to the market great news about the conduct of their monetary policies.

Mario Draghi’s intervention in Lindau (Germany) will be closely monitored and may lead to some volatility in the markets.

On the SP500 chart, I see that the last three weekly candles are coming down. Therefore, I believe that one should give preference to the deals for sale on the H4 chart: 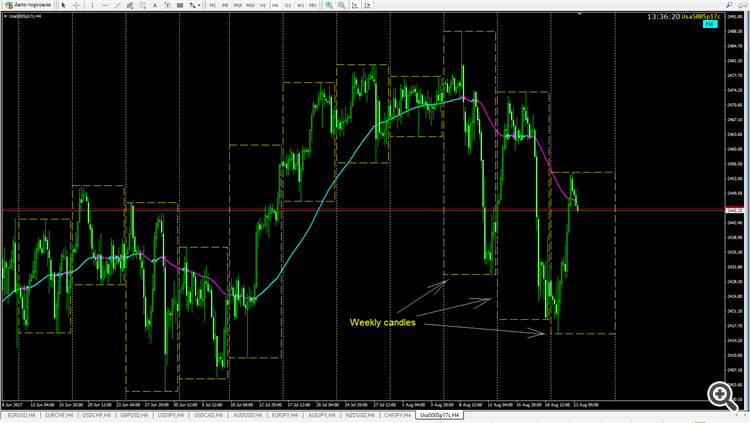 In a speech delivered yesterday in Lindau, Germany, Mario Draghi gave no indication of the next steps in terms of monetary policy, only emphasizing that the recent financial crisis forced economists to readjust the existing economic models.

The monetary policy outlook on both sides of the Atlantic is now focused on the gradual removal of the ECB’s current expansionary measures and on the normalization of the balance sheet by the FED, after the Central Bank has begun the cycle of rising interest rates.

The US market ended higher on Friday. The day was marked by the Conference of Central Banks in Jackson Hole, but more specifically by the interventions of the Presidents of the FED, Janet Yellen, and the ECB, Mario Draghi. These speeches were long awaited, but neither offered any significant signal on the conduct of their respective monetary policies. Janet Yellen focused her speech on banking regulation and improvements in the US economy, while Mario Draghi focused more on his concern about protectionism.

North Korea's firing of a missile over Japan has had an immediate impact on the financial markets. Stocks reacted negatively, and the Dollar fell to a four-month low against the Yen, although it subsequently recovered. Investors opted for safe haven assets, such as Gold, US Treasuries and the Yen. The Gold price has peaked since November last year.

In the pre-opening, European markets were trading on positive ground, as investors followed the stance on Wall Street and Asian markets. Attentions seem to be shifting away from the aggravation of geopolitical tensions to other issues, with developments related to Brexit. Today is the third day of negotiations between the UK and the European Union. In the business field, to highlight the results of the French Carrefour, so the retail sector should attract attention.