The ADP employment report showed that 190 000 jobs were created during November, a level above expectations but lower than in October. For oil, the price of West Texas Intermediate traded in New York fell, after the unexpected increase of oil reserves in the country.

Last week the NZDUSD went back and forward without any clear direction but closed in the green, in the middle of the weekly range, in addition managed to close within the previous week range, which suggests being clearly neutral, neither side is showing control.

After years of crossing a long and winding desert the EU economy is finally displaying strenght beyond QE. The EU stock markets are not yet reflecting this new reality but they will.

European markets closed today’s session with losses, albeit contained. Today’s sentiment was fundamentally marked by the expectation of the FED meeting that ends today (but the outcome will only be known after the closing of European exchanges), as well as the ECB meeting scheduled for tomorrow.

In sectoral terms, trends were observed in different directions, with the positive result being the producers of raw materials and the negative effects of utilities. Among German utilities, Innogy fell about 13% after adjusting its forecasts for 2017. This behavior influenced the performance of RWE (-12.69%) and E.ON (-4.57% ).

The US market traded positively, with investors expecting the Fed meeting. The current FED meeting is the last meeting of the Yellen Presidency. Although the mandate of the current President will not end until February 2018, Janet Yellen will entrust the Central Bank with Jerome Powell, the newly appointed President of the Fed. Financial markets have already anticipated the near-steady increase of 0.25% in interest rates to 1.25% -1.50%. The focus will therefore be on two themes: the revision of the macroeconomic projections and the individual perspectives of each FED member for interest rates in 2018.

Daily price is on bullish breakout for the resistance level at 2,671 to be broken to above for the bullish trend to be continuing. 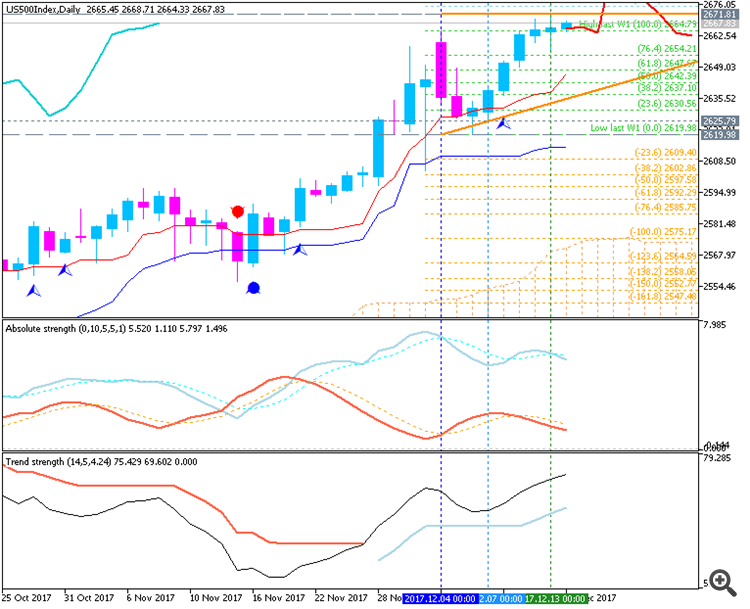 The chart was made on H4 timeframe with Ichimoku market condition setup (MT5) from this post (free to download for indicators and template) as well as the following indicators from CodeBase:

Press review Market Condition Evaluation based Forecast and levels for

The US market declined, one day after the Fed’s decision to raise benchmark interest rates. The meeting of the Central Bank generally corresponded to the expectations of the previous day. The benchmark rates increased 0.25% for the 1.25% 1.50% range. This decision had two opposing votes, from the Fed Governors of Chicago and Minneapolis, who preferred a maintenance of reference rates. The content of the communiqué resembled the one from the end-October meeting, although it took an even more positive view of the economy and the labor market. In this positive view of the economy, the FED has improved its estimates for GDP growth to 2018, which is expected to be 2.50% from the 2.10% previously anticipated. Projections for the years 2019 and 2020 also improved to 2.10% and 2% respectively. Curiously, neither the press release nor the press conference made any reference to the impact of a possible tax reform. To remember that also yesterday, elements of the Republican Party reported having reached an agreement in principle on the fiscal package, with the Republicans of both chambers of the US Congress satisfied with the consensus of the versions proposed and approved in the House of Representatives and the Senate.

Intra-day price on H4 chart is above 200 SMA for the primary bullish trend: the price was bounced from 55 SMA to above for the strong bullish trend to be continuing, otherwise - ranging within the levels. 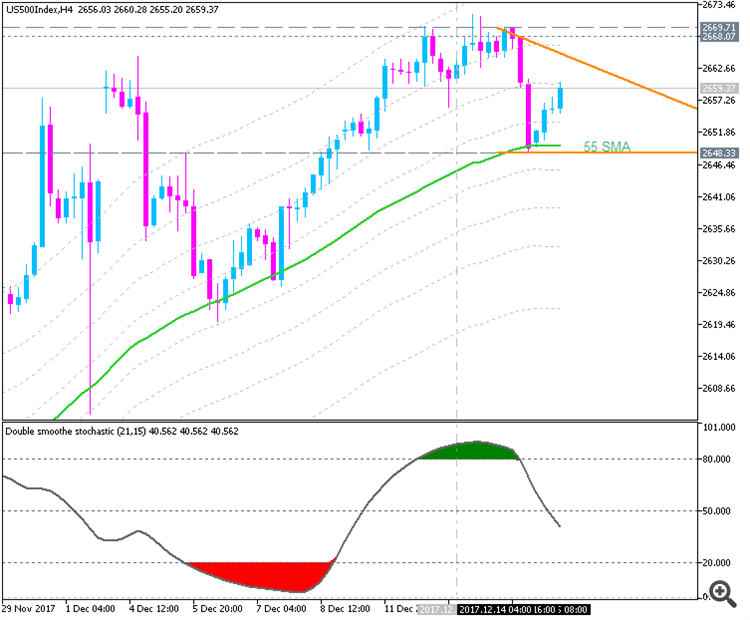 The chart was made on MT5 with MA Channel Stochastic system uploaded on this post, and using standard indicators from Metatrader 5 together with following indicators:

Concerning Final Tax Measure, expected to be voted on next week, one significant change from the Senate bill is that the rate reduction (to 21 percent from the current 35 percent) will begin next year, instead of being delayed until 2019. One should see a chaotic last few weeks of 2017, as companies try to best position themselves.