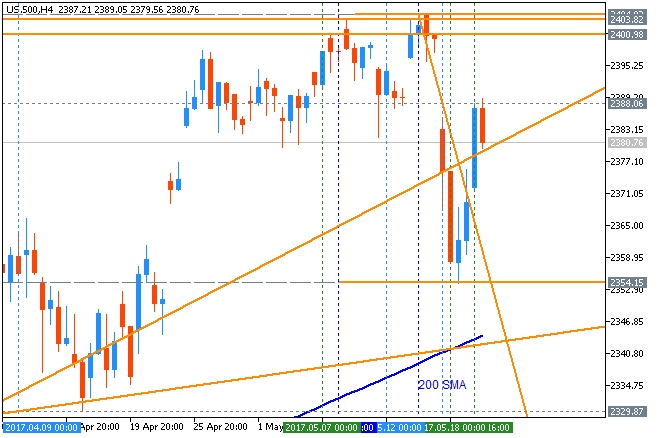 The US dollar was on the back foot, suffering some political issues among other factors. The meeting minutes from the Fed stand out, alongside updates on US and UK GDP but perhaps the biggest event is the testimony of James Comey. Here are the highlights for the upcoming week. 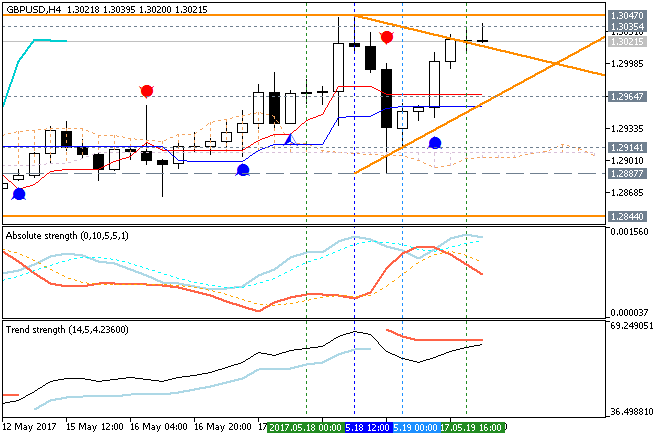 EUR/USD reached the highest in six months, mostly enjoying the weakness of the dollar. PMIs, a key German survey and the ECB meeting minutes stand out in the last full week of May. 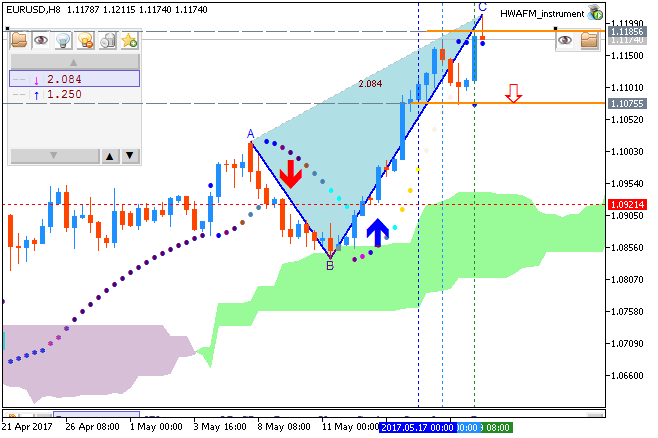 Big Week for Global Markets (based on the article) 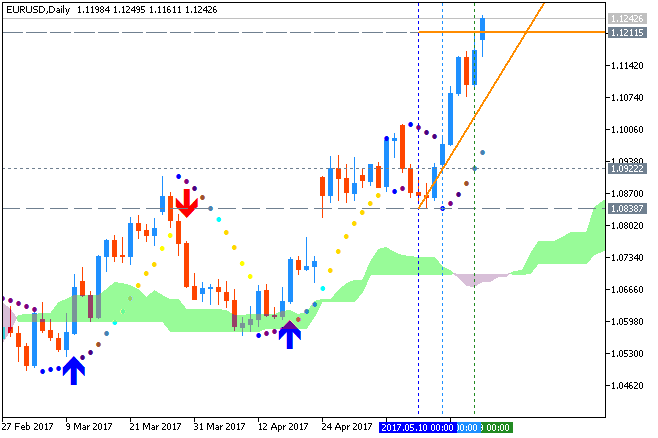 EUR/USD Rockets-through 1.1200
"Of recent, we’ve seen a concerted effort from the European Central Bank to allay concerns of QE-taper. We heard Mario Draghi speak to this at the most recent ECB meeting, remarking that the bank hadn’t yet begun discussions around exit strategies; but judging by price action, markets aren’t necessarily buying that idea, as Mr. Draghi’s dovish assurances merely brought on a quick support test, and this was followed by three weeks of strength as EUR/USD has run from a post-ECB low of 1.0839 up to a fresh six-month high of 1.1246." 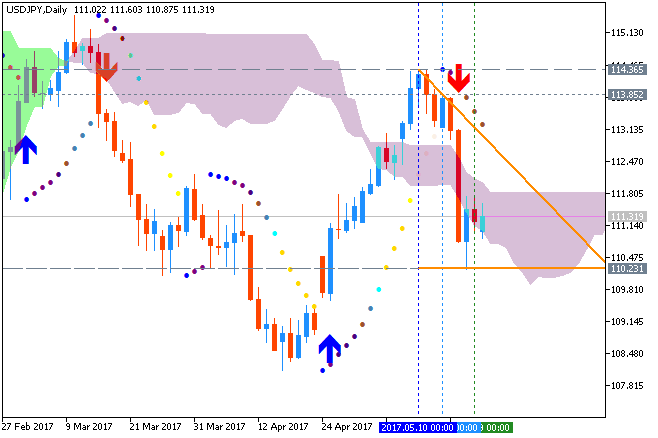 USD/JPY is Back in the Bearish Channel
"The latter portion of April and the early portion of May saw the return of the USD/JPY bullish theme, as the pair broke out of the downward sloping channel that had governed price action since the open of the New Year. But the reversal on Tuesday and Wednesday broke below a key zone of support comprising the area from 111.61-112.40; and now we can see this ‘zone’ acting as near-term support by capping the highs over the past three trading days."

Daily price is located below Ichimoku cloud in the bearish area of the chart for the secondary rally to be started by 0.7488 resistance level to be broken to above with 0.7610 bullish reversal level as the next daily bullish target. 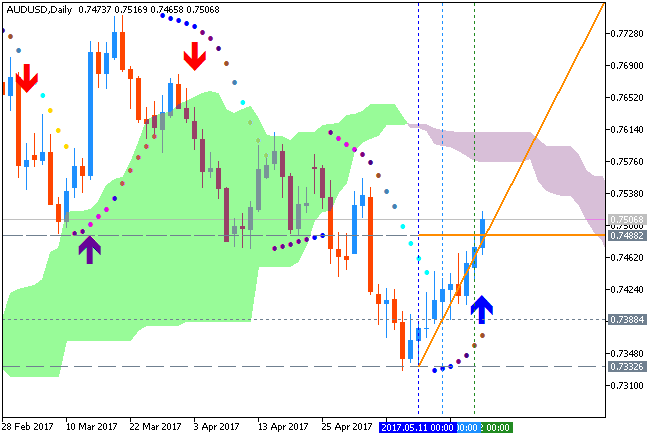 AUD/USD Technical Analysis: 2-Month Channel Resistance Broken
A short AUD/USD trade activated at 0.7423 was stopped out. Getting long looks compelling but the risk/reward setup is skewed against the trade. An order has been set up to enter long at 0.7461. If triggered, the initial target will be 0.7554 with a stop-loss activated on a daily close below 0.7415.
Market Condition Evaluation based Forecast and levels for Forecast and levels for 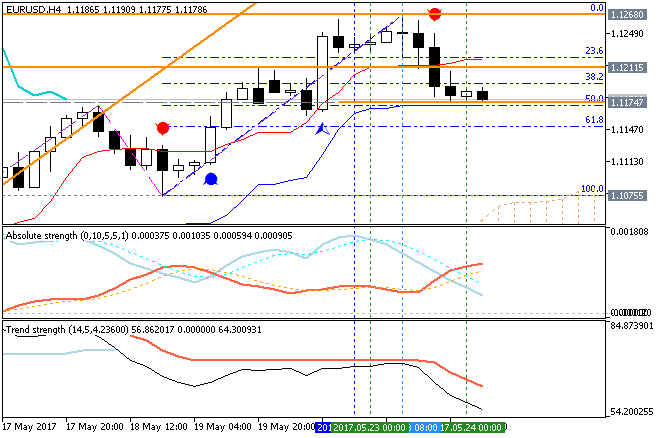 United Overseas Bank (UOB) is suggesting for traders to exit from buy position in case the price will go closer to 1.1300 resistance level:

Tech Targets: EUR/USD, GBP/USD, USD/JPY, AUD/USD, NZD/USD - UOB
EUR/USD: Bullish: Still bullish but odds for extension to 1.1300 are not high. EUR eked out a marginal new high of 1.1267 yesterday before easing off quickly. The price action is not surprising as we have held the view that that “while the outlook for this pair is still bullish, the odds for extension to 1.1300 are not high”. That said, only a...
Forecast and levels for Market Condition Evaluation based EURUSD Technical Analysis 2016, 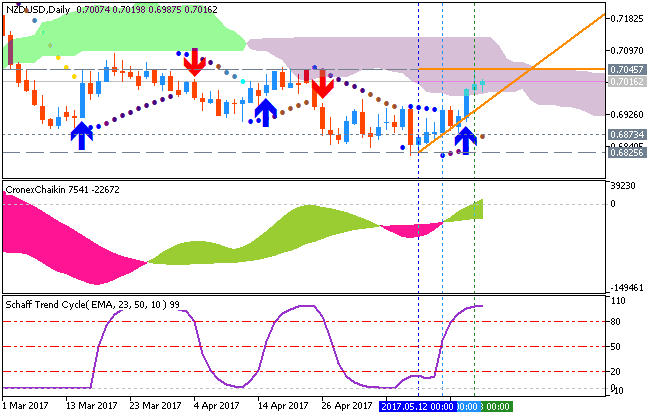 United Overseas Bank (UOB) is evaluating the market condition for this pair daily price as a bulish in case 0.7047/50/55 targets will be broken to above:

Tech Targets: EUR/USD, GBP/USD, USD/JPY, AUD/USD, NZD/USD - UOB
EUR/USD: Bullish: Still bullish but odds for extension to 1.1300 are not high. EUR eked out a marginal new high of 1.1267 yesterday before easing off quickly. The price action is not surprising as we have held the view that that “while the outlook for this pair is still bullish, the odds for extension to 1.1300 are not high”. That said, only a...
Forecast and levels for Current short term Forecast Daily trading ideas

Daily price is on bullish ranging within 2400 psy resistance level and 2354 bearish reversal support level. If the price breaks 2400 to above so the next resistance at 2404 will be the key for the bullish trend to be continuing. 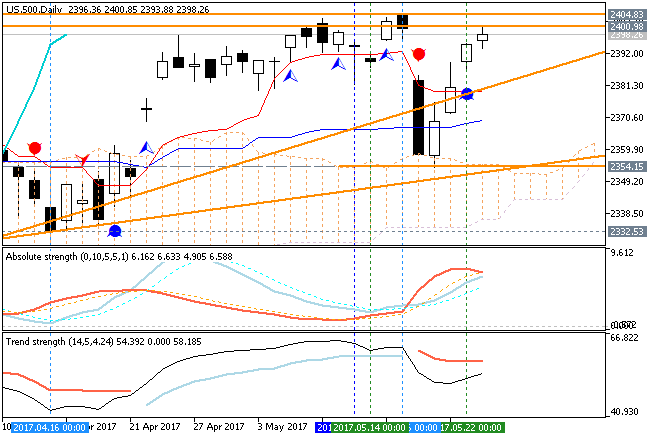 Forecast and levels for Something Interesting in Financial Indicators: ATR channel

Brent Crude Oil - daily bullish reversal (based on the article)

Daily price went to the bullish territory by breaking Ichimoku cloud to above: price is testing 54.60 resistance level for the bullish trend to be continuing with 55.95/56.62 nearest bullish targets. The other scenario is the following: the price will be bounced from one of the resistance level to below back to the bearish area of the chart for the ranging within the levels for direction. 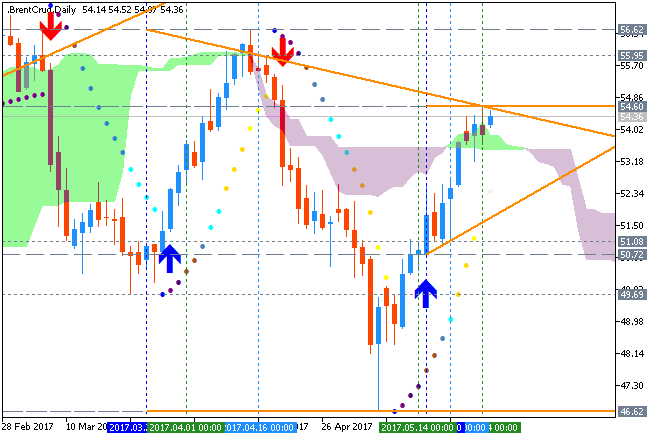 X Wave Triangle
"Under this triangle scenario, prices would need to top soon and below $55.21. If a short term pivot forms, we would anticipate one last dip to hold above $43.79 to finish off the triangle pattern. This is an overall bullish pattern that would lead to a break higher. This triangle is valid in the near term so long as crude oil prices are contained between $43.79 and $55.21."

Diagonal Pattern
"Under this scenario, the dip to $43.79 was wave four of the five wave diagonal. This sequence implies crude oil prices have begun their ending wave higher. This final wave likely grabs a new high above $57 while holding the green support trend line."

$43.79 is Key Level for Crude Oil Prices
“The favored patterns we are watching suggest continued dripping in price towards $39-$43. This price range is where the favored patterns begin to diverge with some patterns pointing towards the upper range of $57 and other patterns pointing towards lower levels that may even retest the February 2016 low of $26.” Now that crude oil prices have...
Forecast and levels for Market Condition Evaluation based Brent Crude Oil Technical

Forex traders like to use different methods and tools to help them trade profitably. There are hundreds of technical indicators available to choose from; some of them work well and some of them only seem to work some of the time.

Often, traders like to combine indicators as doing so helps to provide more robust trading signals. By doing so, traders have more chance of making money. As well, filtering out trades helps to reduce commission costs overall. Here are three ways to combine forex indicators:

Volume and breakout is a classic combination that traders use but unfortunately some brokers do not provide much in the way of volume data in forex markets.

Similarly, volume helps show direction as it indicates the move is “real” and not just a technical move. Combining the two greatly reduces the chance of whipsaws.

These two indicators work well as confirmation indicators in their own right and they can also be combined together for two different types of strategies.

Mean reversion strategies can benefit if the RSI is oversold or overbought. If the forex pair is a good way from its moving average, it also signals a return to the mean is likely so combining the two signals helps strengthen the trade.

Either one can also be used as a filter against the other. For example, if RSI is overbought but there is no MA cross, then the trade signal can be annoyed.

Indicators can be combined with fundamental metrics too and this is sensible in forex markets.

Open position data or COT (Commitment of Traders) data, can be used to support or restrict technical signals.

As an example, let’s say that GBP/USD is riding high and has just climbed towards the top of its upper Bollinger Band. In some cases, this could be interpreted as a bullish sign but a look at the open position data suggests a one-sided situation that could limit any further move upwards.

In this example, open position data suggests that around 80% of open positions in GBP/USD are long positions. If this is the case, then there are very few bulls left in the market to buy. The situation is very one-sided and only a few short positions would be needed to make the currency drop back.