EUR/USD, French elections, and more (adapted from the article) 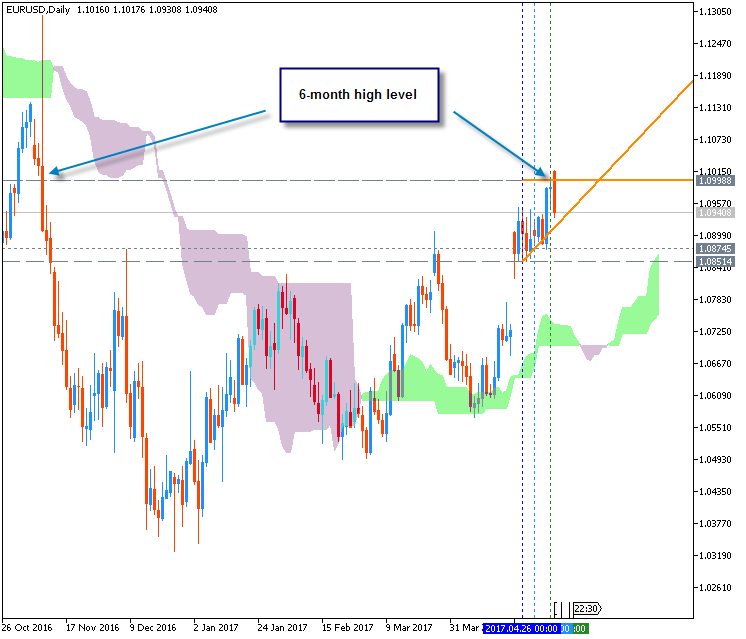 Neil Wilson, a senior markets analyst at City of London brokerage ETX Capital (the London-based Scottish analyst): "The result sends a loud signal to investors that political risks in France and across Europe are receding and that is undoubtedly supportive of European equities and the euro. Nevertheless this Macron win is very much a pro-risk event. The relief rally we have seen since the first round looks set to continue even though Sunday’s expected result was to some extent largely priced in."

Neil Mellor, Senior Currency Strategist and managing director at BNY Mellon: "The lack of a well-oiled Party machine behind Macron risks the possibility of a weak Presidency if there is ‘cohabitation’ i.e. a politically non-aligned President and Prime Minister, which last happened in 1997. Nevertheless, we would not be surprised were the euro pushing toward US$1.11 in early Asian trading. After all one of the features of the EUR in recent years has been its use as a funding currency for carry trade activity, which has resulted in the curious outcome that the currency  has often strengthened during times of Eurozone stress and has fallen amidst rising optimism."

Bill Street, head of investments for EMEA at State Street Global Advisors: "It gives markets a much deserved breather from European politics. This result, combined with last week’s preliminary Greek debt agreement, will be enough to support a short-term relief rally. Looking forward, Macron only offers upside surprises. In a do-nothing scenario, we have the status quo of political paralysis, but with a favourable external environment and steady growth improvement. In the goldilocks scenario, he gets a working parliament and builds a partnership with Germany to launch meaningful reforms. That would deliver a substantial boost to markets by year-end, which is currently not priced in." 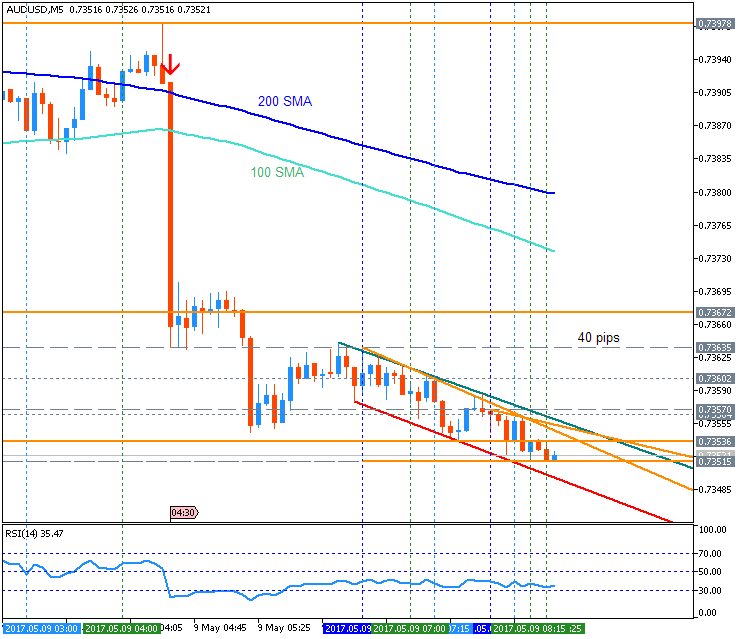 Dollar Index - Daily Ranging Bearish (based on the article)

Daily price is below ichimoku cloud for the bearish ranging wthin the narrow s/r levels: 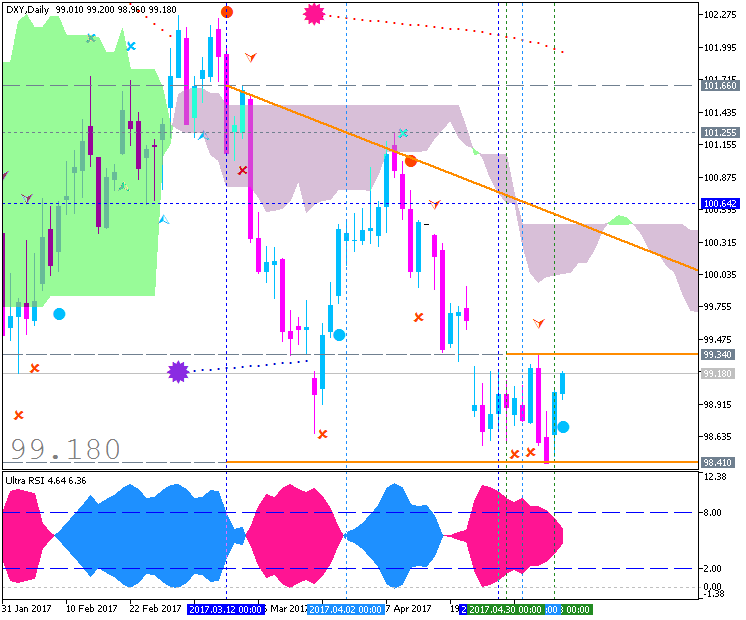 Forecast and levels for Forecast for Q1'17 - Market Condition Evaluation based

Daily price is on bullish trend with the seondary correction to be started yesterday by bounced from 1.1017 resistance level to below. The price is testing 1.0874 and 1.0851 support levels for the correction to be continuing with Fibo bearish reversal level at 1.0741 as a nearest target to re-enter. 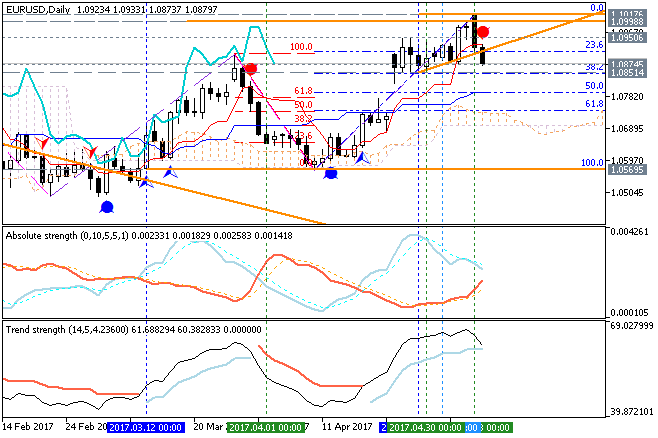 EUR/USD Technical Analysis: Rejected at 12-Month Trend Line
of ebbing upside momentum. Confirmation of a larger top implying continuation downward is still pending however as prices test the bounds of the short-term uptrend. A daily close below trend line support at 1.0934 opens the door for a test of the 23.6% Fibonacci retracement at 1.0862. Alternatively, a break above major resistance at 1.1002...
Forecast and levels for Forecast for Q2'16 - Market Condition Evaluation based

[CNY - CPI] = Change in the price of goods and services purchased by consumers. 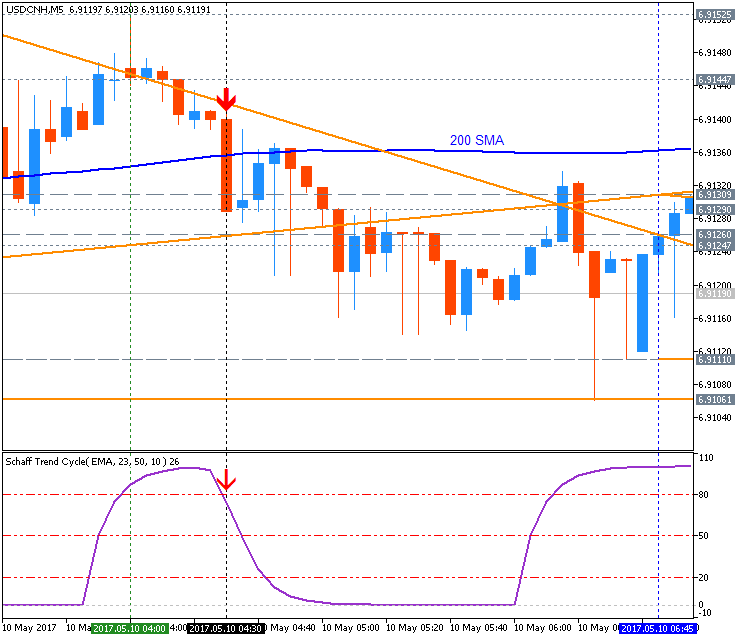 [EUR - ECB President Draghi Speaks] = Speech about the impact of monetary policy at the Dutch House of Representatives, in Netherlands. 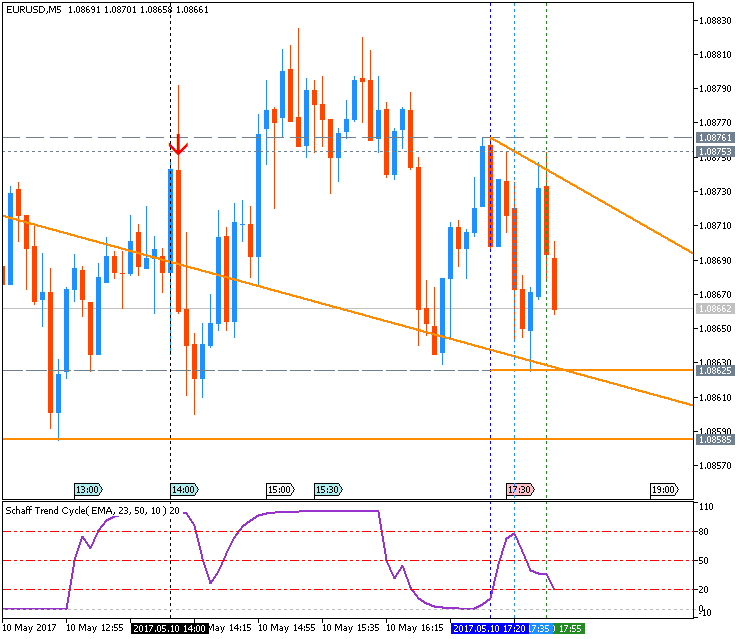 Introductory remarks at the House of Representatives of the Netherlands
This year, we celebrate the 60th and 25th anniversaries of the Treaties of Rome and Maastricht. Despite the many challenges that we face as Europeans, we should never forget the significant achievements of European integration in providing peace, security and prosperity. The fact that the Treaty that gave birth to the euro was signed in this...
Market Condition Evaluation based Forecast and levels for EURUSD Technical Analysis 2016,

CAC 40 bounced from 5429.43 resistance to the bullish ranging to be started (based on the article)

Daily price is located above 100-day SMA/200-day SMA reversal levels in the bullish area of the chart. The price was bounced from 5429.43 resistance level to below for the ranging market condiion to be started. 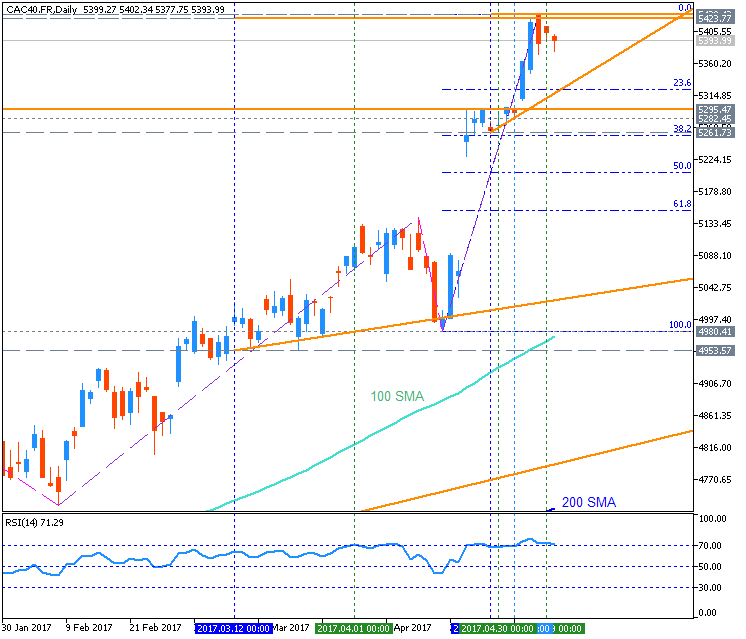 CAC 40 Uptrend Remains Supported
The CAC 40 has opened Wednesday’s trading lower, potentially decline for the third consecutive session after printing a new 2017 high to start the week. Despite this recent string of losses, traders may still consider the CAC 40 technically in an ongoing uptrend. At present the CAC 40 is trading down -0.02%. L daily close above the displayed...
Forecast and levels for Forecast for Q1'16 - Forecast for Q2'16 - 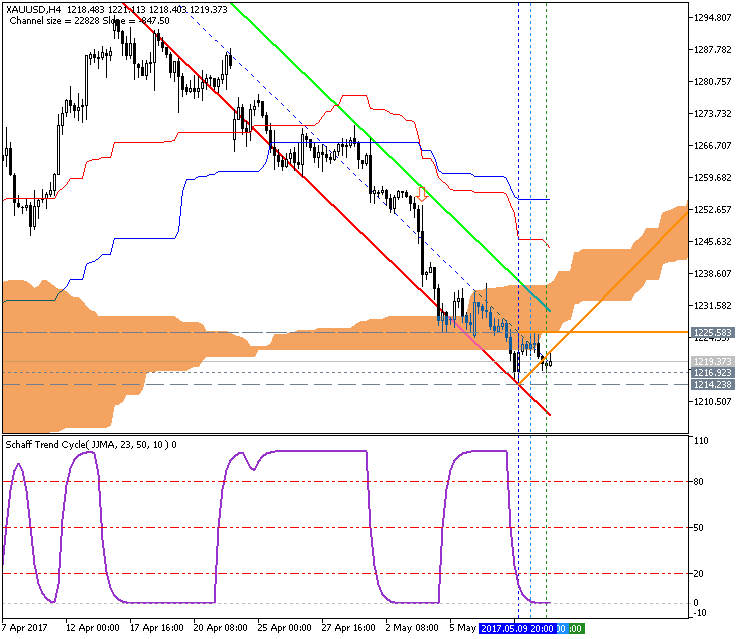 H4 price broke intra-day 72/144/288 Ichimoku cloud to below to be reversed to the primary bearish market condition. The price is moved along trendline channel by testing 1214.23 support level to below for the bearish trend to be continuing.

Gold Prices Find Support; Will the Down Trend Continue?
Gold prices have made little net progress over the past four months. Little net progress is typical of a corrective consolidative move. Gold prices, as of today, are still less than a 38% retracement of the December 2016 to February 2017 up trend. A shallow retracement of that nature suggests the longer term bull trend from December is not...
Forecast and levels for Forecast for Q1'16 - Forecast for Q4'16 - 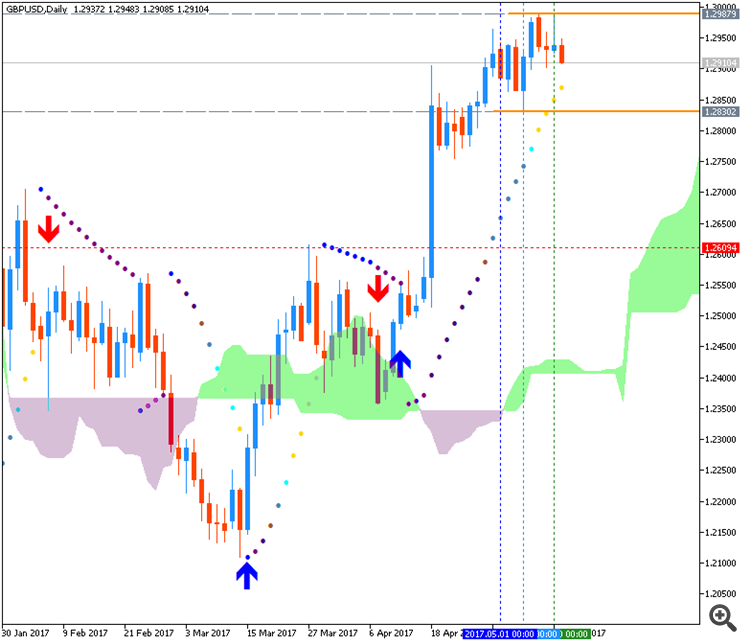 Daily price is located above Ichimoku cloud in the bullish area of the chart.

Greater Dissent Inside the BoE to Fuel GBP/USD Relief Rally
Even though the Bank of England (BoE) appears to be in no rush to lift the benchmark interest rate off of the record-low, the fresh updates to the quarterly inflation report may fuel the relief rally in the British Pound should the central bank highlight an improved outlook for the U.K. economy. Moreover, the policy statement may reveal a...
Forecast and levels for Market Condition Evaluation based Forecast for Q3'16 -
1...510511512513514515516517518519520521522523524...695
New comment