Envelopes technical indicator is formed with two Moving Averages one of which is shifted upward and another one is shifted downward.

The selection of optimum relative number of band margins shifting is determined with the market volatility: the higher the latter is, the stronger the shift is.

The logic behind envelopes is that overzealous buyers and sellers push the price to the extremes (i.e., the upper and lower bands), at which point the prices often stabilize by moving to more realistic levels. This is similar to the interpretation of Bollinger Bands. 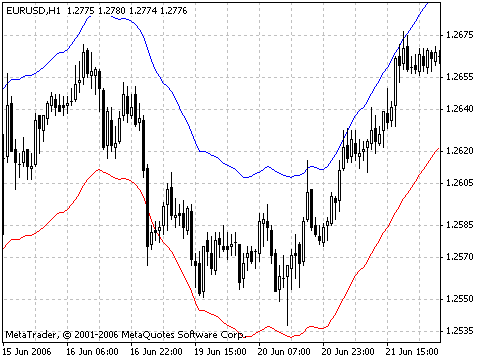 Full description of Envelopes is available in the Technical analysis: Envelopes

Average Directional Movement Index Indicator (ADX) helps to determine if there is a price trend.

Fractals indicator it is a series of at least five successive bars, with the highest HIGH in the middle, and two lower HIGHs on both sides.