If you use periods of longer duration, when calculating the indicator, you’ll be able to catch the long term market tendency. Indicators based on short periods let you enter the market at the point of the least risk and plan the time of transaction so that it falls in with the major trend.

The value of the DeMarker for the "i" interval is calculated as follows: 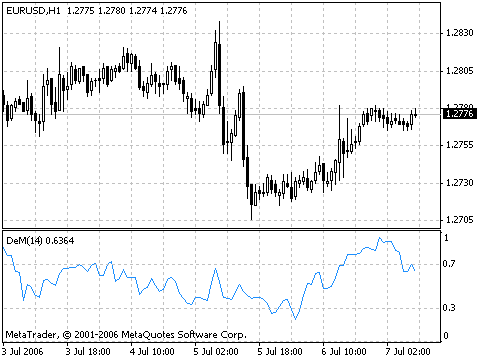 Full description of DeM is available in the Technical analysis: DeMarker

Average Directional Movement Index Indicator (ADX) helps to determine if there is a price trend.

A form of trading system using Price Channel principles has been implemented.

Envelopes technical indicator is formed with two Moving Averages one of which is shifted upward and another one is shifted downward.

Fractals indicator it is a series of at least five successive bars, with the highest HIGH in the middle, and two lower HIGHs on both sides.