The MACD fluctuates above and below the zero line as the Moving Averages converge, cross and diverge. Traders can look for signal line crossovers, center line crossovers and divergences to generate signals. Because the MACD is unbounded, it is not particularly useful for identifying overbought and oversold levels.

This version of MACD uses Hull Moving Average for MACD calculation instead of using EMA (as the original Gerald Appel version does). That makes it "faster" than the EMA version and suitable for scalping techniques as well as for trending techniques (if longer calculation periods are used). 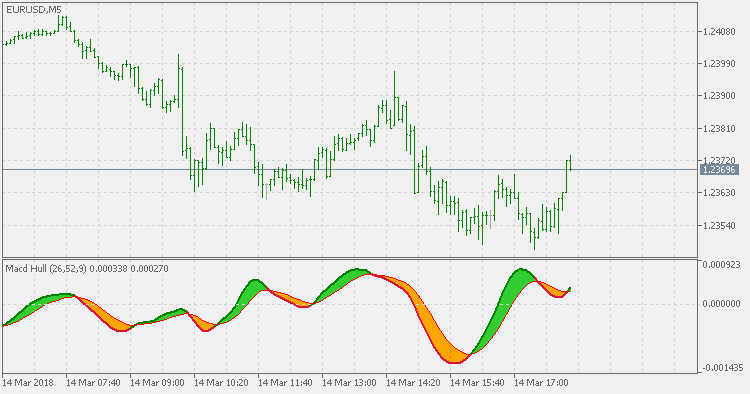 The indicator shows current trend by showing a color of the current balance. The opposite color is not displayed as long as it does not become a trend (hence, lack of color, means the opposite trend is the prevailing)

MetaTrader 5 version of Candle Closing Time Remaining (CCTR) is an indicator which displays the remaining time for an open candle to be closed.

This version of Stochastic Oscillator reduces the number of false alerts by smoothing the price prior to be used in the stochastic calculation. That makes a nice smooth stochastic as a result that can easily be used for trend trading systems.

A very well known RSI of average is made with, all in all, 3 lines of a code in a main loop (color assignment on RSI slope change included in those 4 lines). This one can be used as template for some other indicator and can provide a simplicity solution for those that think that everything is very complicated in MetaTrader 5.