- EUR/USD. We published a chart seven days ago that clearly showed how the correlation between the S&P500 index and EUR/USD was broken in early January. But now everything is back to normal: the S&P500 continued its growth, reaching a historic maximum of 3859.84 on January 21, and the EUR/USD pair went up with it, fully justifying the forecast of the majority (65%) of experts. Groping on Monday the local bottom at 1.2053, the euro then rose to 1.2190, the final chord sounded slightly lower, at 1.2170.

The end of the week was quite calm, thanks to the head of the European Central Bank. Christine Lagarde was never able to weaken the European currency, but also did not allow it to seriously overtake the dollar. And this can be considered a certain success.

In her speech following the ECB meeting on Thursday 21 January, Madame Lagarde explained what is good and what is bad. The "Good" section includes the start of vaccinations, the success of the EU economic recovery and the reduction of political uncertainty in the US. The "Bad" section includes the worsening epidemiological situation, increased lockdowns, the likelihood of a double recession in the eurozone and low inflation, which is reluctant to grow because of the strong euro. At the same time, the ECB refused again at its meeting last Thursday to adjust monetary policy, only stating that “the package of the Pandemic Emergency Purchase Programme may not be used in full.” That news pushed the euro up. However, not by much since no specifics followed. And what criteria will be used to determine the scale of PEPP has remained a mystery to investors;

- GBP/USD. The pound grew along with the euro for the first half of the week. And it even broke through the upper boundary of the channel 1.3450-1.3700, reaching the height of 1.3745. However, the ending of the five-day period turned out to be blurry. The rally in the pound was not supported either by retail sales (an increase of 0.3% instead of the forecasted 1.2%), or business activity indicators: in the service sector, the Markit index fell from 49.4 to 38.8. British Prime Minister Boris Johnson added pessimism, saying that the third round of the lockdown could last well into the summer. As a result, the pound made a reversal, returned within the designated channel, and finished at 1.3680;

- USD/JPY. Recall that the main forecast, supported by 65% of analysts, said that this pair would hold within the downward medium-term channel, which began in the last days of March 2020 of the year. Levels 103.60 and 103.00 were called as supports.

That scenario turned out to be perfectly correct. The pair moves for the second week in a row unsuccessfully trying to break the upper bound of this channel. The first attempt last week was made on Tuesday January 19, when it bounced off the support at 103.60 and reached 104.07. The next rebound, on Thursday January 22, from the level of 103.30, was stopped at 103.90, after which the pair ended the working week where it had already visited repeatedly in January, in the 103.80 zone;

- cryptocurrencies. Is this atemporary correction or the beginning of a new crypto winter? This question became dominant last week. Bitcoin dipped below $29.000 on Friday December 22, which, of course, scared many investors. Guggenheim investment director Scott Minerd predicts a further decline down to $20,000 - the zone from which the explosive rally started in the second half of December 2020, which raised the BTC quotes by 100%.

Optimists reassure: over the year, bitcoin has risen in price by 5.75 times, from $7,300 on January 01, 2020 to $41.900 on January 08, 2021, so a correction by "some" 30% is, they say, not a reason for panic. In addition, a number of analysts note that this time the fall of bitcoin is not accompanied by an exit to fiat. Investors, fixing profits on the main cryptocurrency, do not leave the digital market, but open positions on more promising, in their opinion, altcoins. For example, on ethereum, the price of which has increased more than 11 times over the year. And if by the evening of January 22, the BTC/USD pair lost 22% relative to the maximum, then the decline in ETH/USD was less than 10%.

This version is also supported by data on the crypto market capitalization. In seven days, total capitalization, including bitcoin, decreased by 9.5% (from $1.028 trillion to $0.933 trillion). At the same time, the capitalization of altcoins remained at the same level of $300 billion. It was mainly bitcoin that was losing, the dominance index of which decreased from 67.48% to 64.31%. The share of Ethereum, on the contrary, increased from 13.52% to 15.01%.

As for the Crypto Fear & Greed Index, it finally came out of the overbought zone and fell from 88 to 40 points in a week. This value corresponds to a neutral state, when it is too late to open short positions on the BTC/USD pair, and too early to open long positions. Although, according to analysts, it is during such price rollbacks that "whales" begin to actively replenish their bitcoin wallets, buying up coins of small alarmist investors.

As for the forecast for the coming week, summarizing the views of a number of experts, as well as forecasts made on the basis of a variety of methods of technical and graphical analysis, we can say the following:

- EUR/USD. Analyzing the results of the last ECB meeting, we can conclude that, despite the not very clear comments of Ms. Lagarde, the mood of the European regulator is still hawkish. The bank's Governing Council noted that EU debt markets had shown a rise in yields and concerns about a rapid strengthening of the euro had eased. Now we must wait for the meeting of the US Federal Reserve, which will be held on January 28. The interest rate on the dollar is likely to remain at the same level of 0.25%, so the main interest will be the comments of the regulator's management regarding the monetary policy in the near future. Special attention will be drawn to them also because this will be the first Fed meeting since the inauguration of the new US President Joe Biden.

- GBP/USD. At the time of writing the review, oscillator readings on H4 look pretty chaotic. As for the remaining indicators, most of them are still painted green. Thus, 75% of oscillators and graphical analysis on D1, as well as 75% of trend indicators on H4 and 100% on D1 look to the north.

But as for analysts, they, for the most part (65%), do not share the bullish optimism of technical analysis. The reason, as mentioned above, is the poor performance of the British economy and the statement of the country's Prime Minister Boris Johnson warning that the third round of the lockdown could last well into the summer. This is forcing investors to not just revise their forecasts for the pound, but also to re-start discussing a scenario with negative Bank of England interest rates. 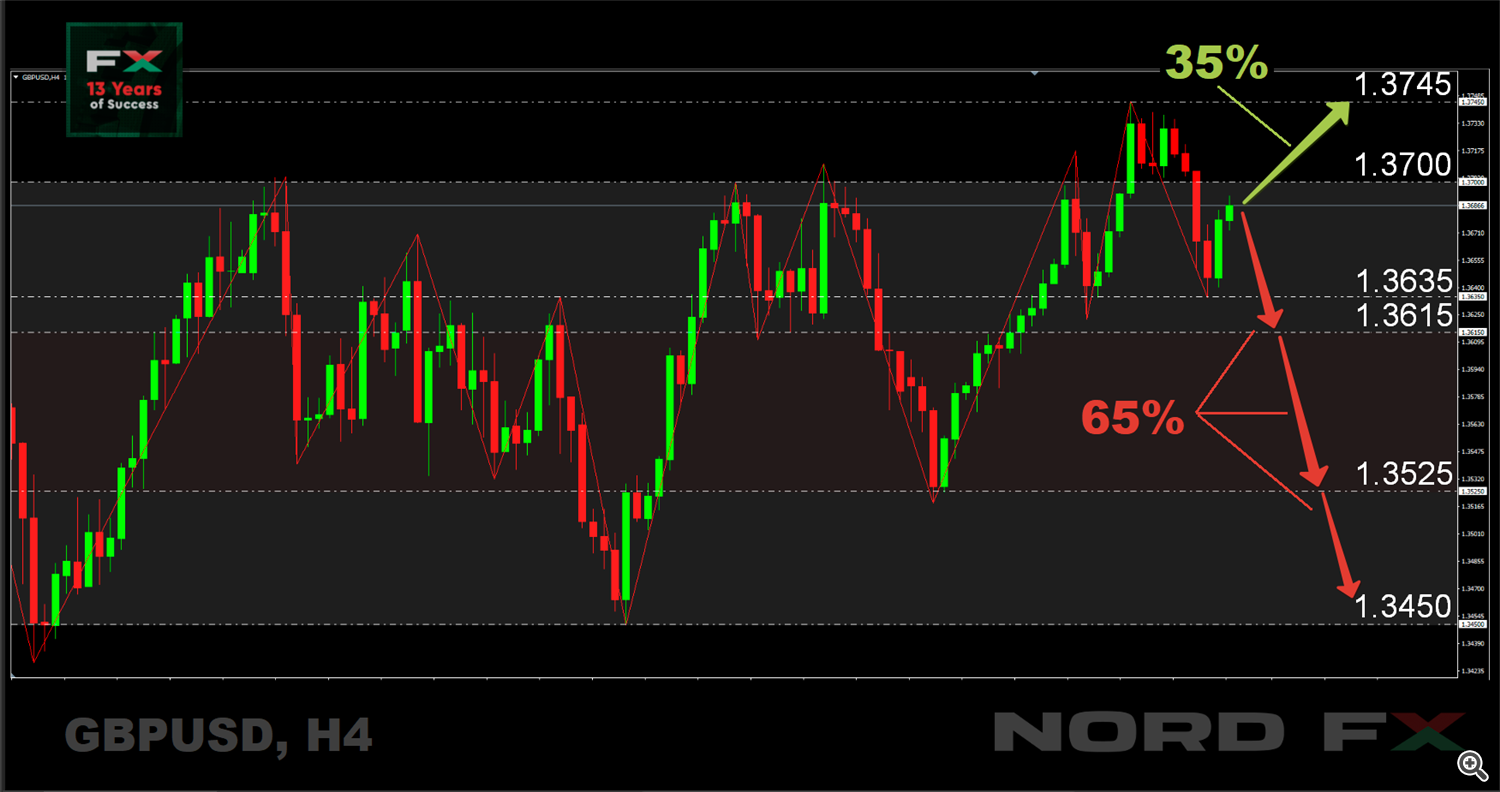 - USD/JPY. At its meeting on Thursday January 21, the Bank of Japan, as well as the ECB, did not adjust the parameters of its monetary policy. The expectations for GDP were slightly lowered over the past, 2020, but the regulator raised its forecasts for 2021, considering that despite everything, the country's economy will continue to grow.

Based on this, 70% of experts favored further smooth strengthening of the yen and the descent of the pair to support 103.00, and in case of increased volatility - another 50 points lower. The nearest support is 103.30.

- cryptocurrencies. It is no secret how highly volatile and risky bitcoin is. Its explosive growth was driven by large institutional investors who began to enter the crypto market in the second half of 2020, fueled by the COVID-19 pandemic and fiscal stimulus from the US Federal Reserve, which cut interest rates and flooded the market with cheap dollars.

And now analysts are talking about the fact that cryptocurrencies could only be a temporary measure to preserve capital, and that now institutions are phasing out purchases of digital assets.

According to JPMorgan Chase strategists, the key to the short-term outlook for bitcoin's price is the world's largest digital asset management company Grayscale Investments, with a crypto portfolio currently valued at $23 billion. According to the calculations of bank analysts, for the BTC/USD pair to break through the resistance of $40,000, it is necessary that Grayscale Bitcoin Trust maintain the pace of inflow funds of $100 million per day in the coming days and weeks. Otherwise, a deep correction can be expected.

At the time of writing the forecast, the pair's quotes are in the region of $32,500. This is a fairly strong support/resistance level for the past three weeks. And if capitalization does not go up, and the price again manages to fall below $30,000, one can expect increased pressure from the bears and a new wave of active sales. 65% of experts agree with this.

But there are also professional market participants who maintain a moderately bullish mood, which is confirmed by positive premiums for March futures, + 3.5-5.0%. And the head of investment company Pantera Capital Dan Morehead expects to see "bitcoin for $45,000 or even more" in February. However, he advises traders and other industry participants to be as prudent as possible.

The statements of the new US administration also inspire some optimism. So the candidate for the US Treasury and former Fed Chairman Janet Yellen, speaking about possible improvements to the traditional financial system, called for encouraging the use of cryptocurrencies, if it, of course, occurs within the framework of the law. But time will tell what these laws will be. Although ... already now those who wish can use the services of ... a fortune teller.

As Reuters reported, fortune teller Maren Altman from New York makes her predictions of the bitcoin rate based on the movement of the stars. She predicted the beginning of the January correction of bitcoin absolutely accurately, since on that day the trajectory of Mercury (the price of BTC) should have been crossed by Saturn (the limiting indicator). Looking ahead, Ms. Altman sees “some favorable signals at the end of the month and especially in February and early March.” “However, a big correction will begin in mid-March,” the fortune teller says. “Mid-April also looks pessimistic. May is bullish.”

By the way, Ms. Altman already has more than a million followers on social networks, among whom there may be large institutional investors. So, it is possible that it is she, together with the stars, and not Grayscale Investments, who runs the crypto market J.

May Results: NordFX Trader Earns Over $50,000 on Bitcoin Collapse