Today, the dollar gained support and grew at the beginning of the Asian trading session. On Wednesday, Fed representatives, Robert Kaplan and Loretta Mester, spoke in favor of raising interest rates. They expect acceleration in the growth of the US economy and inflation. According to Robert Kaplan, inflationary pressures are "growing", and it will be better if the Fed starts raising rates "sooner rather than later".

Apple announced on Wednesday that it would repatriate most of the profits it received abroad. Under the new tax laws, US companies that make profits outside the US will be able to pay a one-time tax of 15.5% of the repatriated assets. Apple said that the company will pay a one-time tax of $ 38 billion as a result of the repatriation of its foreign cash. If other large American companies follow Apple's example, this will increase demand for the dollar.

Nevertheless, the negative mood of investors regarding the dollar is still preserved. The growth of the world economy outside the US will support the currencies of other countries where econic growth is expected, and will cause their strengthening against the dollar.

Also at this time will be published indicators of activity in the real estate market in the US in December, as well as the index of business activity in the manufacturing sector of the Federal Reserve Bank of Philadelphia in January.

At 21:30 (GMT) index of business activity in the manufacturing sector (PMI) of New Zealand, assessing conditions in the business environment of the country, will be published. The production PMI is considered an important indicator of general economic conditions. In November, the PMI was 57.2. If the updated data for December will be better than November's value, the New Zealand dollar will strengthen, including in the pair NZD / USD.

*)An advanced fundamental analysis is available on the Tifia Forex Broker website at tifia.com/analytics 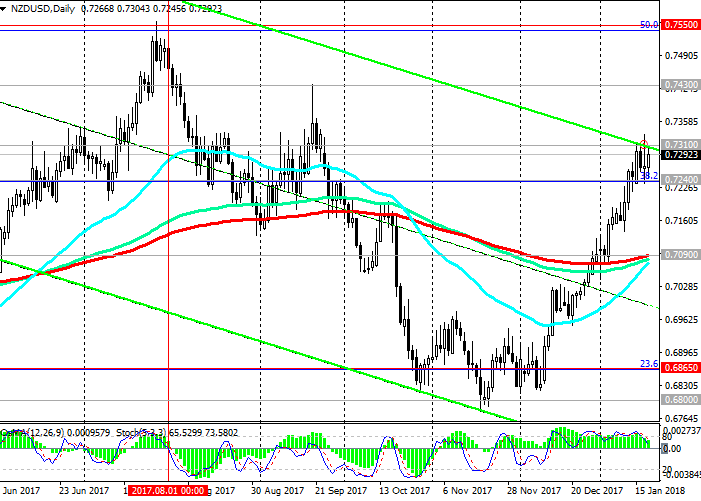 Yesterday, the NZD / USD upgraded the 2-month high near the 0.7330 mark and today again develops an upward move. So far, the negative attitude of investors to the US dollar remains, and the positive dynamics of the NZD / USD still prevails. The breakdown of the local resistance level of 0.7330 (January highs) will cause growth towards resistance levels of 0.7430 (September highs), 0.7550 Fibonacci level of 50%).

The signal to the resumption of sales of the NZD / USD will be a breakdown of the support level of 0.7240 (EMA200 on the weekly chart, EMA200 on the 1-hour chart and the bottom line of the upward channel on the 4-hour chart, and the Fibonacci level of 38.2%).

The purpose of the downward correction is the most important support level 0.7090 (EMA200 on the daily and monthly charts, EMA50 on the weekly chart). 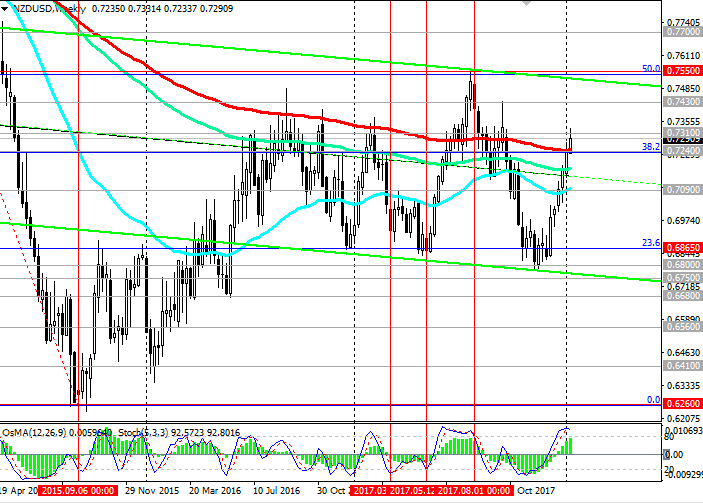