EA Tree is the first drag and drop MetaTrader MQL5 Expert Advisor Builder. It is a windows application that runs locally on your computer. You can create complex MQL5 code using a very easy to use graphical user interface.

In EA Tree, Expert Advisors are created by connecting boxes together. Boxes may contain MQL5 functions, technical indicators, custom indicators, or values. Outputs of one box may be connected to inputs of another box to form a "tree of boxes". EA Tree generates MQL5 code from the "tree of boxes" and then uses the MetaTrader 5 platform installed on your computer to convert the MQL5 code into an executable Expert Advisor. 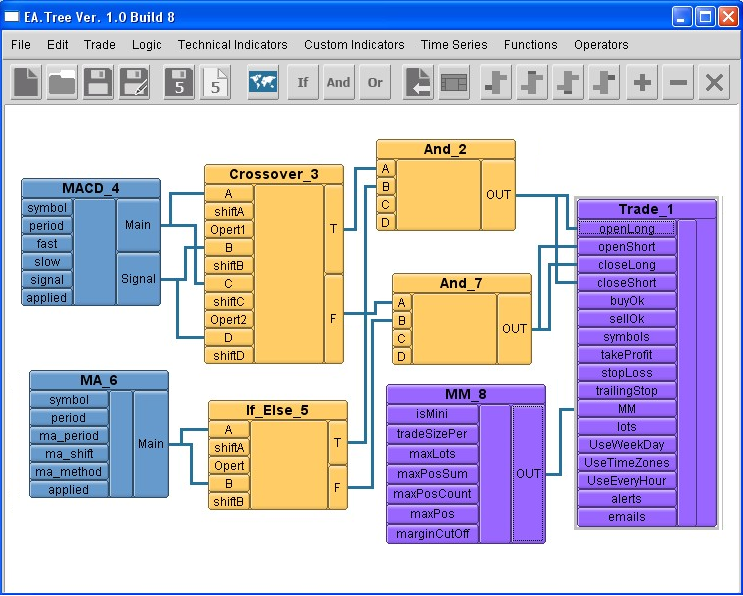 In the next few section, we will go over the basic concepts of EA Tree.

The concept of the "box" and "buttons".

Boxes are a representation of information in EA Tree. They may contain technical indicator, mathematical function, etc. Each box has input buttons and output buttons. In this example, the Add box has three input buttons labeled A, B, and С and one output button labeled OUT.

Each box has a unique label using its name followed by an index. In this example the label Add_1 indicates that the box name is Add and its index is 1, which means that it was the first box that was created in a layout of boxes. 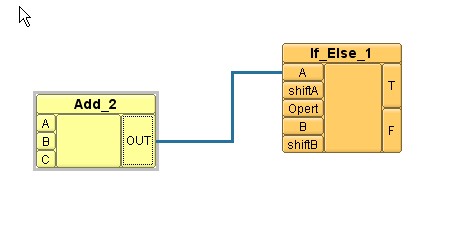 The Trade box is the main box in EA Tree. It has many input buttons. The most important buttons are the openLong, openShort, closeLong, and closeShort buttons. There are also many trading parameters. 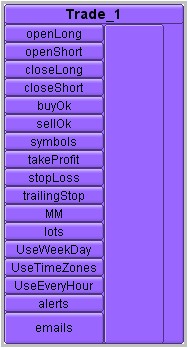 The MM box handles MoneyManagement in EA Tree. It has several input buttons. You need to connect its output button to the MM button of the Trade box. 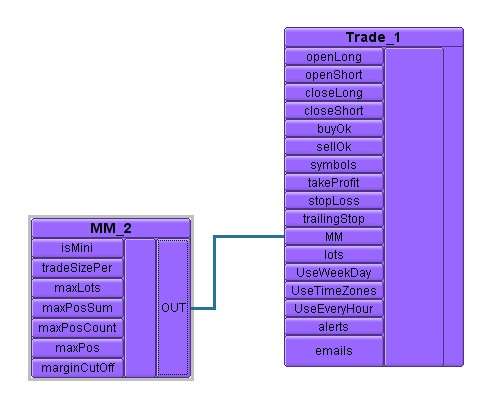 Logic boxes are important to connect between trade box condition buttons: openLong, openShort, closeLong, and closeShort and the rest of the boxes in the layout.

The If-Else box has this logic:

Where operator could be equal to, not equal to, less than, greater than, etc.

The Crossover box has this logic:

Where operator1 and operator2 could be equal to, not equal to, less than, greater than, etc. The shifts sets indexes of the indicators to connect to.

In this example we have this logic:

Then T is true and F is false 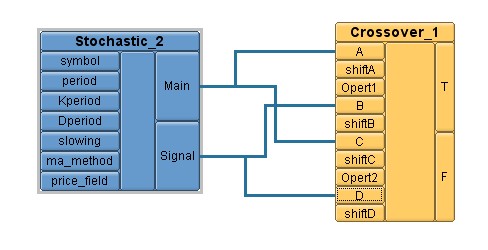 The AND box has this logic:

The OR box has this logic:

EA Tree has many boxes for MQL5 functions including:

In this section, let us use some of the tools covered in this article to create a simple EA.

We will use default trade box and no money management settings.

Let us get started:

1. Create a Trade box and create an AND box and connect its output to the openLong button of the Trade box: 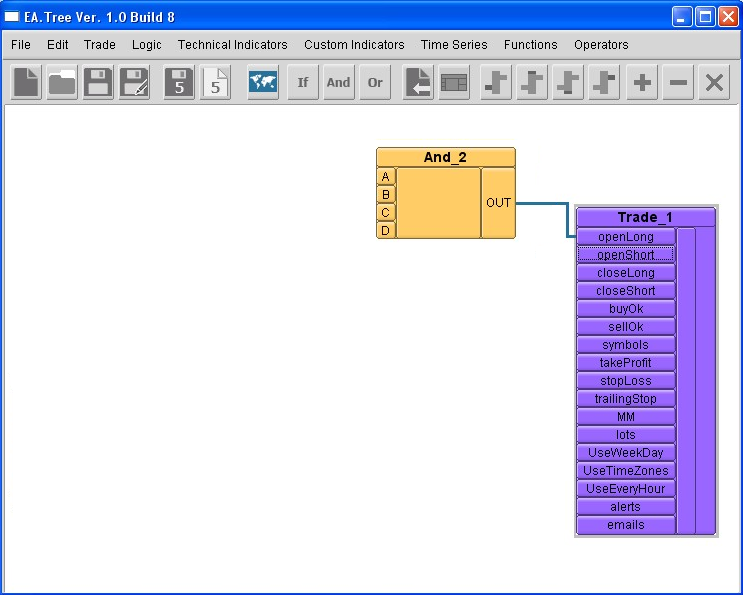 2. Create a Crossover box using and connect its T(true) output button to the A button of the And box. 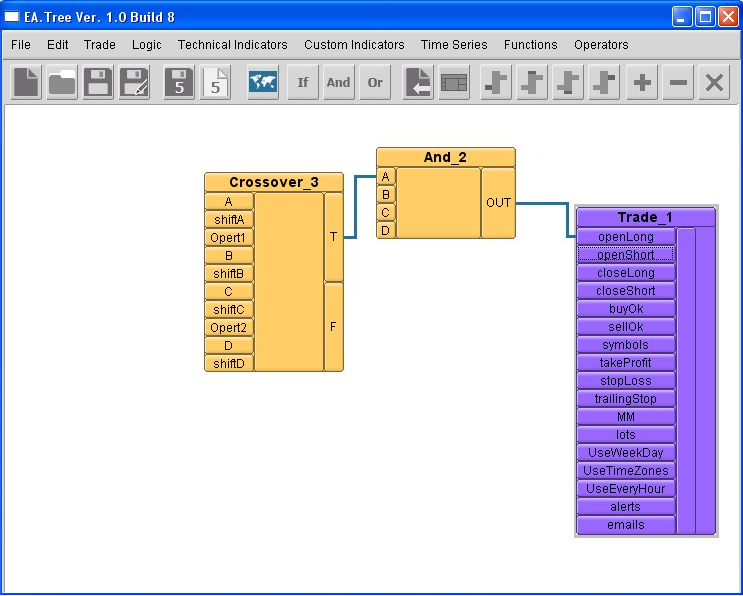 The logic here is: 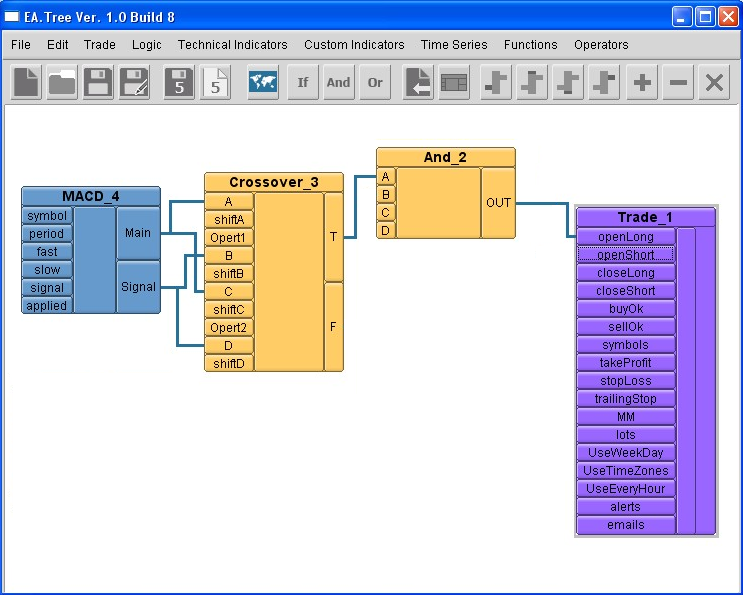 The subtree for the openLong condition is now complete with these three conditions: 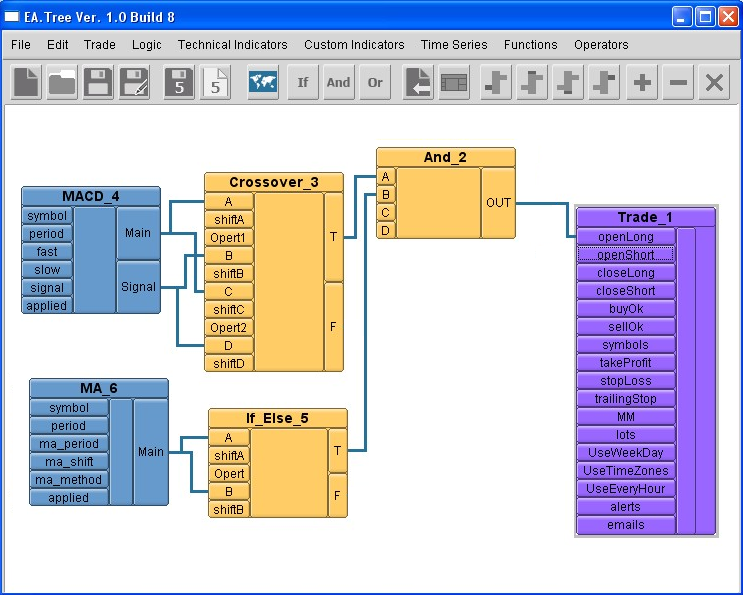 5. Create another And box and connect its output button to the openShort button of the trade box. 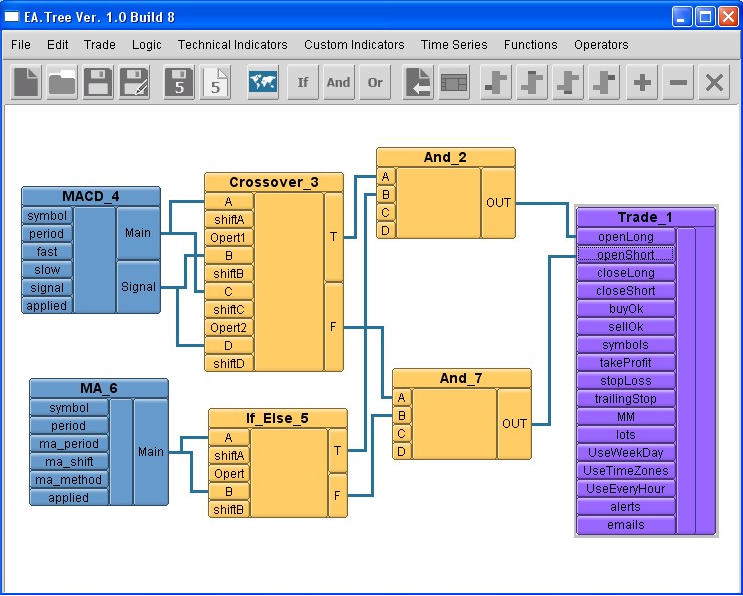 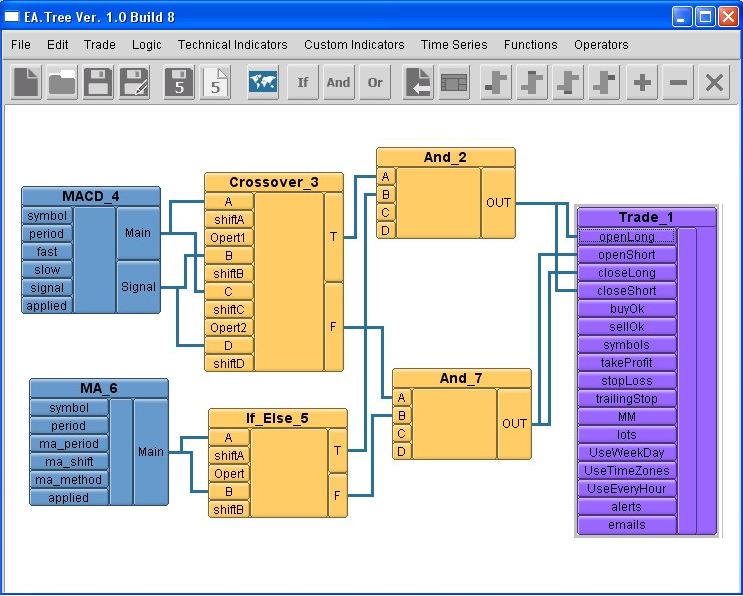 8. Double click on both MACD and MA boxes and select a number of variables to be input variables in the MQL5 EA that we will generate. 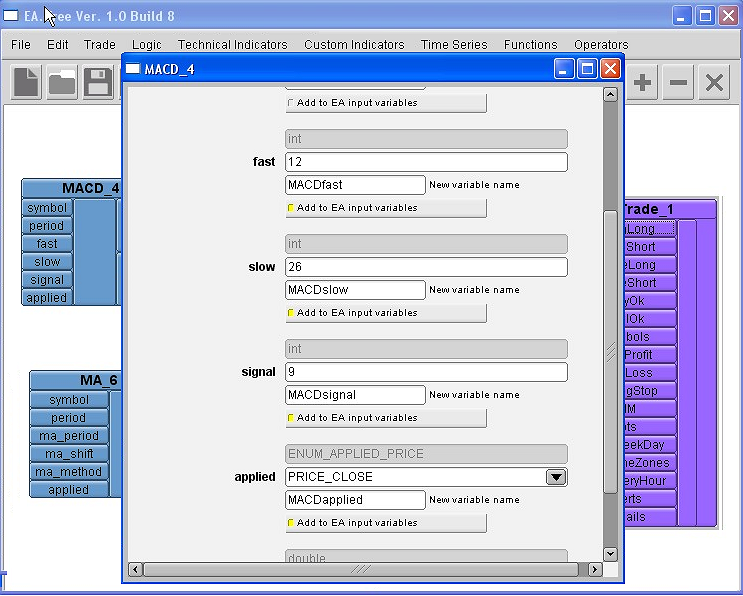 9. The layout is now complete. Save the Layout and save the MQL5 file. Then open the new MQL5 Expert Advisor file in MetaEditor 5 and compile it. 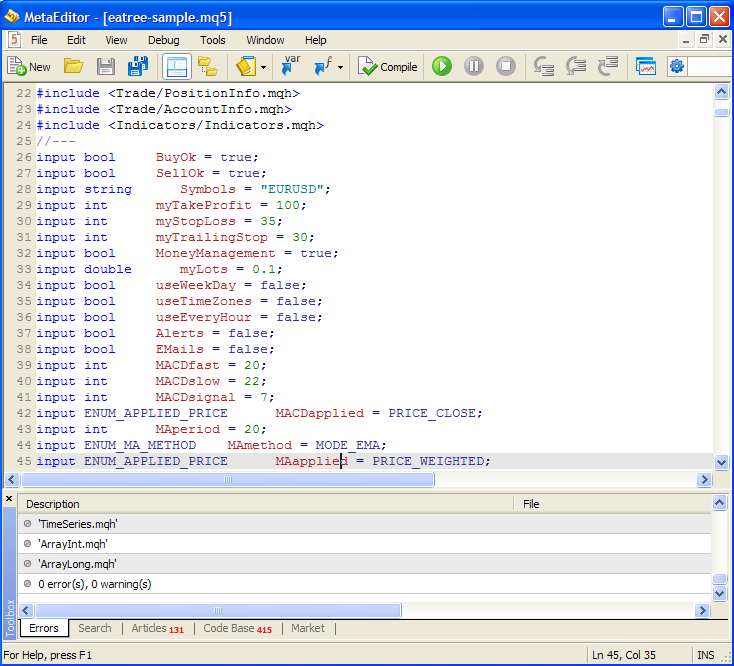 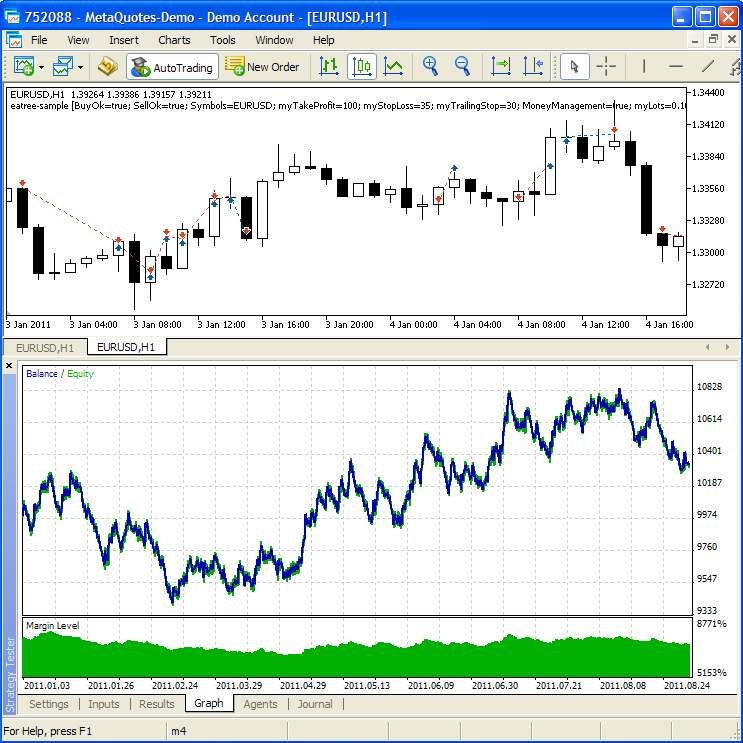 Figure 20. Testing of the Expert Advisor

There are many benefits of using EA Tree:

Attached files |
Download ZIP
eatree-sample.mq5 (33.7 KB)
Warning: All rights to these materials are reserved by MetaQuotes Ltd. Copying or reprinting of these materials in whole or in part is prohibited.
Last comments | Go to discussion (41)

First I owe you an apology for asking.

I´m having some problems with my EA since a start this program. To fit the boxes was so easy(demo version) but my standard version Eatree EAs aren´t running in my mt5 broker.

I don´t work with forex and so five digits too.(only two digits). I´m having "divided by zero" problems and i think it is because off different types parameters off trailing step and lot size

As you see i´m not a C++ or MT5 programmer but a I saw most off .mt5 files with lot and stops (double) parameters

I´ve  already seen the user guide, demos videos and faq´s and  in despite off there is a lot off box fitting examples there is almost nothing about MM, Lot and stops parameters

Do i have to convert the integer stops parameters to doubles types one? How can i do it?

Many thanks for considering my request

Balut | 16 Dec 2016 at 13:01
I bought EATree mt5
No one EA works with my broker
I have problems "shared by zero"
I asked the EATree support for explanation
There was no usable answer.
Have you solved the prolem and how?

rayapureddy | 16 Feb 2019 at 13:12
i have a problem, that in eatree when i make file and save it, its not coming in meta editor 5 , where it is saving iam not getting, can any one explain clearly from layout saving to mt5 saving ,up to meta editor5.

A student from Germany Tim Fass (Tim) is participating in the Automated Trading Championship for the first time. Nevertheless, his Expert Advisor The_Wild_13 already got featured at the very top of the Championship rating and seems to be holding his position in the top ten. Tim told us about his Expert Advisor, his faith in the success of simple strategies and his wildest dreams.

Interview with Olexandr Topchylo (Better) is the second publication within the "ATC Champions League" project. Having won the Automated Trading Championship 2007, this professional trader caught the attention of investors. Olexandr says that his first place in the ATC 2007 is one of the major events of his trading experience. However, later on this popularity helped him discover the biggest disappointment - it is so easy to lose investors after the first drawdown on an investor account.

Appearance of the Expert Advisor cs2011 by Igor Korepin (Xupypr) at the very top of the Automated Trading Championship 2011 was really impressive - its balance was almost twice that of the EA featured on the second place. However, despite such a sound breakaway, the Expert Advisor could not stay long on the first line. Igor frankly said that he relied much on a lucky start of his trading robot in the competition. We'll see if luck helps this simple EA to take the lead in the ATC 2011 race again.

The Expert Advisor of Ilnur Khasanov (aharata) is holding its place in our TOP-10 chart of the Automated Trading Championship 2011 participants from the third week already, though Ilnur's acquaintance with Forex has started only a year ago. The idea that forms the basis of the Expert Advisor is simple but the trading robot contains self-optimization elements. Perhaps, that is the key to its survival? Besides, the author had to change the Expert Advisor planned to be submitted for the Championship...