Bollinger on Bollinger Bands Hardcover by John A. Bollinger

Over the past two decades, thousands of veteran traders have come to view Bollinger Bands as the most representative**and reliable**tool for assessing expected price action. Now, in the long-anticipated Bollinger on Bollinger Bands, John Bollinger himself explains how to use this extraordinary technique to effectively compare price and indicator movements.

Traders can look to this techniques-oriented book for hundreds of valuable insights, including:

By understanding how to incorporate Bollinger's techniques into their own investment strategy, investors will greatly increase their ability to ignore often-costly emotions and arrive at rational decisions supported by both the facts and the underlying market environment.

2.                    That relative definition can be used to compare price action and indicator action to arrive at rigorous buy and sell decisions.

8.                    Closes outside the Bollinger Bands are initially continuation signals, not reversal signals. (This has been the basis for many successful volatility breakout systems.)

10.                 The average deployed as the middle Bollinger Band should not be the best one for crossovers. Rather, it should be descriptive of the intermediate-term trend.

12.                 Traditional Bollinger Bands are based upon a simple moving average. This is because a simple average is used in the standard deviation calculation and we wish to be logically consistent.

15.                 %b tells us where we are in relation to the Bollinger Bands. The position within the bands is calculated using an adaptation of the formula for Stochastic

16.                 %b has many uses; among the more important are identification of divergences, pattern recognition and the coding of trading systems using Bollinger Bands.

17.                 Indicators can be normalized with %b, eliminating fixed thresholds in the process. To do this plot 50-period or longer Bollinger Bands on an indicator and then calculate %b of the indicator.

18.                 BandWidth tells us how wide the Bollinger Bands are. The raw width is normalized using the middle band. Using the default parameters BandWidth is four times the coefficient of variation.

20.                 Bollinger Bands can be used on most financial time series, including equities, indices, foreign exchange, commodities, futures, options and bonds.

21.                 Bollinger Bands can be used on bars of any length, 5 minutes, one hour, daily, weekly, etc. The key is that the bars must contain enough activity to give a robust picture of the price-formation mechanism at work.

22.                 Bollinger Bands do not provide continuous advice; rather they help indentify setups where the odds may be in your favor.

Bollinger Bands® and MACD Trading System (based on the article)

I am loving this one,
so there is another crazy idea that I was told is an illusion.

I saw the idea being used by another guy.

BB uused to determine support and resistance points in the future

Please tell me what you think of it

RSI with BB - indicator for MetaTrader 5 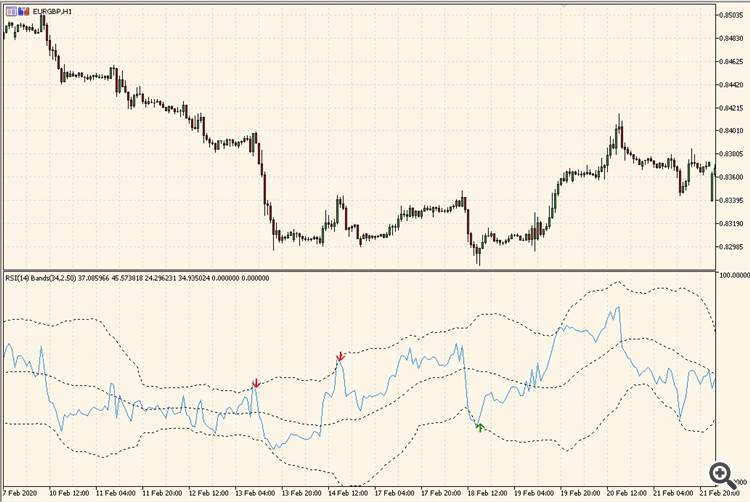 The indicator consists in an RSI and Bollinger bands calculated on it, it also plots arrows when RSI value was out of Bands and came again in Bands. 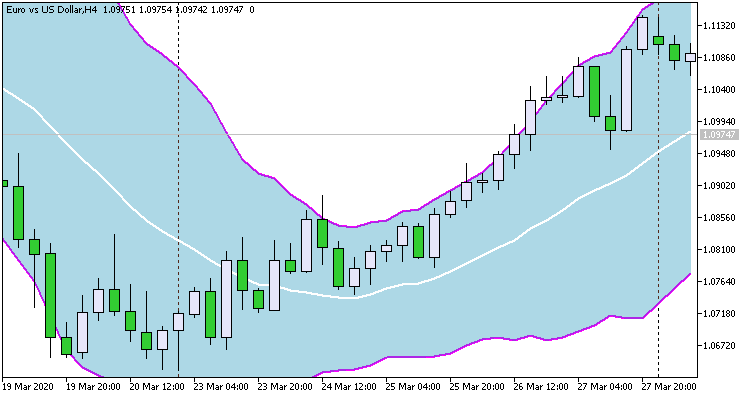 Adding the drawing style DRAW_FILLING to the standard Bollinger Bands indicator . The indicator is recommended for manual trading - to visually highlight the indicator area between the boundaries of ' Bands upper ' and ' Bands lower '. 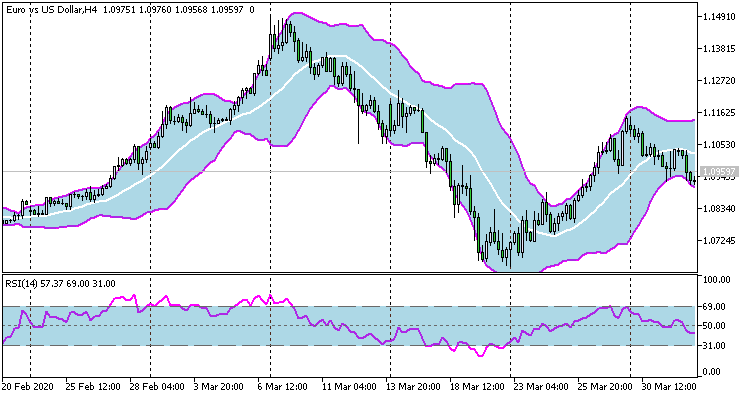 Dual Candle-stick Strategy thread
The strategy is related to Bollinger Bands Fills and RSI Fills indicators with template file.
It is going to be converted to the EA I hope.

In the description, I marked some points with gray color - these are the nuances that I noticed during testing, but have not yet included in version 1. Before starting the adviser, I recommend that you FULLY read the entire description (use the built-in translator: